Read Kill Them Wherever You Find Them Online

Kill Them Wherever You Find Them 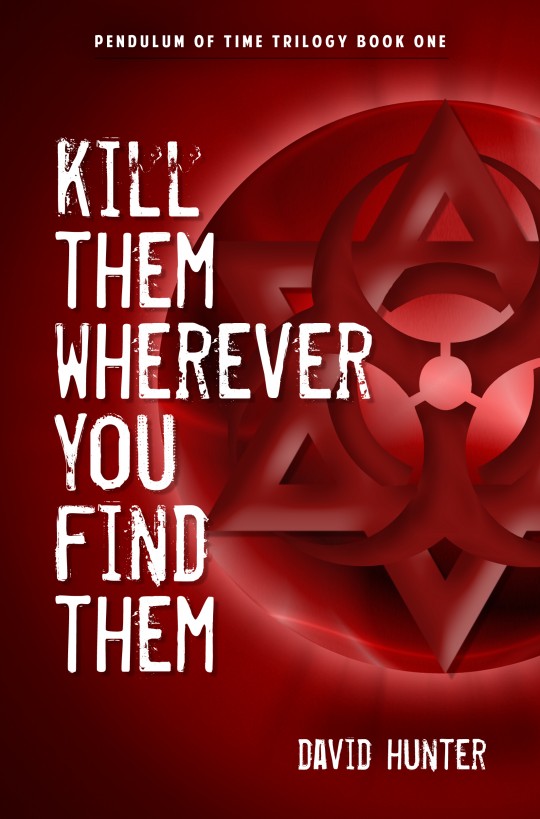 Kill Them Wherever You Find Them

This ebook is licensed for your personal
enjoyment only. This ebook may not be re-sold or given away to
other people. If you would like to share this book with another
person, please purchase an additional copy for each recipient. If
you're reading this book and did not purchase it, or it wasn't
purchased for your use only, then please go to your favorite ebook
retailer and purchase your own copy. Thank you for respecting the
hard work of this author.

Phase I: Time as a River

1. A Question of Time

4. Wherever You Find Them

5. Genesis of "The
Project"

6. Escape into a Dream

18. In the Multitude of
Counselors

23. Who Pulls the Strings

26. Once More to Prepare

For Lynn, an example
of grace and
courage in dark times; also a lover of faeries, unicorns, dragons,
and that prone-to-combustion bird: the phoenix. Though her birthday
request of a five-page story about these beings was hijacked by the
author's imagination, mention of them is placed throughout the
story as a compromise.

Cover:
The beautiful cover was created
by Rachael A. Lewis.

Valuable character and plot development
insights came from my wife Diane, during the months of writing.

Mr. Ridion Feldman, an Israeli, helped me
with a more clear idea of how people on both sides of the
Israeli-Arab/Iranian conflict view each other. His input, sent
directly to me via e-mail, helped me to refine the thought
processes and views of some of the characters in this book -
especially that of "Mona."

Fearing I may overlook someone, I would like
to express heartfelt gratitude to all whose contributions made this
book better than it could ever have been as a solo act.

Readers:
I acknowledge and thank you,
the reader. Your time is valuable, I know. I'm honored that you
have allotted many hours of your time to read enjoy this story.
Once finished, I invite you to also enjoy the final two books in
this "Pendulum of Time" thrillogy: "Abducting the Time Master" and
"Fluid Future."

Readers' Feedback:
I appreciate it
greatly when my readers provide me with their own thoughts and
comments via e-mail to
[email protected]
. Feedback from my readers,
where appropriate and adding value to the story, will incorporated
into the book's future editions. Alas, I don't have the luxury of
having a publishing company behind me with their own team of expert
editors!

This is a work of fiction.
Characters,
other than those of known world history such as Jefferson Davis of
the American Confederacy and Gamal Abdel Nasser Hussein personal
hero and past leader of Egypt, are strictly creations of the
author. Any resemblance to individuals, past or present, is nothing
more than coincidence.

This story is not intended to be an insight
into the enormous complexities of Jewish Zionism, both religious
and secular, in the modern State of Israel as they relate to the
complex religious and secular blends of neighboring nations or the
larger global community.

The plot interweaves with de facto world
history, such as the poorly named "Arab Spring" sweeping the Middle
East during most of 2011 and beyond, ISIS and more. While such
events provide a measure of context for the story, nothing more
should be inferred thereby.

Muslims, Arabs, and Iranians have a rich
history of valuable contributions to the world over many centuries.
The majority of faithful Muslims would be wonderful neighbors. (See
the "
Learn More
" section at the end of
this book for more authentic Islam versus politicized Islam.)

"Time travel used to be thought of
as just science fiction, but Einstein's
General Theory of
Relativity
allows for the possibility of that we could warp
space-time so much that you could go off in a rocket and return
before you set out." - Stephen Hawking

Turning up the collar
of his
jacket
,
Yuri Ivanov ascended the subway
steps two at a time to street level, then turned right for the
short walk of a few blocks to his office building. Despite the
forest of bland industrial and office buildings surrounding
him
,
he enjoyed the view, allowing his
mind to wander.

Multi-colored leaves swirled, pirouetting as
they fell to the ground. Occasional gusts of wind swept the
sidewalk clean, only to deposit dirt and city litter in their
wake.

The cool, crisp air invigorated him as the
distance to his office closed. An urban dweller, Yuri didn't take
much notice of traffic noises or the presence of fellow
pedestrians, directing his attention instead to a noisy little
flock of birds making their way to warmer climes. The morning could
not have been more tranquil.

As his hand reached for the stainless steel
door handle of his office building
,
windows shattered from the immense energy expelled from nearby
explosions. The collapsing of buildings fashioned a grisly backdrop
as vehicles, people, and other objects were ejected into the air,
slamming into one another before finally falling back to the
ground. Yuri's body, less his legs and an arm, would be but one of
many casualties identified in the carnage.

Emergency lines for the city were flooded
with calls from the injured and panicked, as well as the curious. A
stream of police and ambulances arrived on the scene. In triage
fashion
,
those destined to die from their
wounds were passed over in favor of treating the injured with a
possibility of survival.

Within minutes of the arrival of the first
responders several SUVs, black with tinted windows, parked a
discrete distance behind. License plates identified them as
government vehicles though such wasn't necessary as both passengers
and drivers wore plain dark suits with matching dark glasses.

Riot Police would follow under the auspices
of controlling the gathering crowd in this sensitive industrial
area where a secret military laboratory for biological weapons
research and development had been in operation. In reality the Riot
Police were there to prevent the media from getting too close to
the area, and the truth.

Teams from the Bomb Squad carefully
approached the chaotic area, identifying a wide, deeply carved
crater as the epicenter of the blasts.

Search and Rescue teams initiated their
gruesome duty with scent dogs straining against their leashes as
they identified bodies, not differentiating the living from the
dead.

It didn't take long for the onlookers to
realize that the government men continued to maintain their
distance from the carnage.

Two larger vehicles pulled into the area, one
the length of a small bus, the other resembling a semi truck. Small
satellite dishes, along with a cluster of other antennae, dotted
their respective roofs. Sliding doors expelled people dressed in
full hazardous materials suits, each carrying curious looking
scientific instruments and cases of varying sizes.

Specialists in Hazmat suits opened their
cases revealing additional instruments to gauge the level of
contaminants in the atmosphere, structure surfaces, and soil. The
crowd of observers grew deathly silent as they started to move away
from the disaster scene. The pace was casual at first, as if nobody
wanted to be perceived as cowardly. Bravado cast aside the group
broke into a run, frequently glancing back at the unfolding scene.
In the rush for safety some were knocked to the ground, trampled by
those too fearful for their own lives to care.

To the relief of all, one-by-one the Hazmat
team gave a thumbs up, removing their head covering masks to
breathe air that didn't originate from tanks on their backs.

Following their gesture of approval various
sections around the crater were cleared for inspection as the bomb
squad, in tandem with a team of structural engineers, indicating
areas sufficiently safe for ongoing search and rescue efforts.

Weeks after the incident bits and pieces of
the wreckage were slowly pieced together to identify hardware
components, detonation triggers, explosives and more. The
components, more especially how they were assembled, would serve as
a type of fingerprint to identify the bombs' creator.

A specific chemical signature was eventually
traced to a factory located in Ukraine. This manufacturer was known
to export to wealthy countries in the Middle East and two volatile
countries in South America. The bombs could have been made
anywhere.

Equally vital to bomb identification was the
need to find something never revealed to the public. The
decommissioned laboratory housed canisters containing deadly
biological pathogens that were scheduled for transport to a new bio
weapons research facility.

The contents of just one canister held the
potential to kill tens or even hundreds of thousands of people
under ideal conditions.

Highlights to Heaven by Nancy J. Cohen
Chasing Spirits: The Building of the "Ghost Adventures" Crew by Groff, Nick, Belanger, Jeff
Of Shadows and Obsession by Sarah Fine
B00AAOCX2E EBOK by DeLorenzo, Jaycee
Badger the Mystical Mutt and the Crumpled Capers by Lyn McNicol
The Body Economic by Basu, Sanjay, Stuckler, David
Marius' Mules VII: The Great Revolt by S. J. A. Turney
The Undertakers by Ty Drago
Undergrounders by David Skuy
Testers by Paul Enock
Our partner