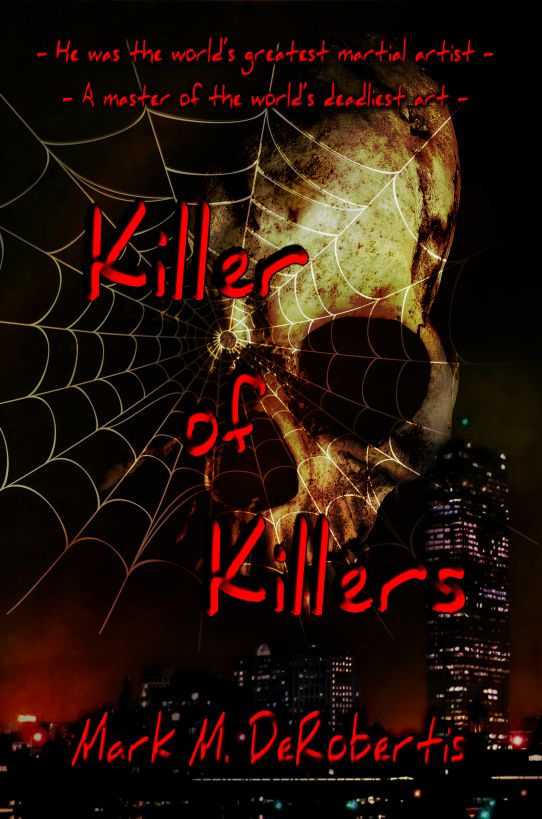 Killer of Killers
by Mark
DeRobertis

This ebook is licensed for your
personal enjoyment only. This ebook may not be re-sold or given
away to other people. If you would like to share this book with
another person, please purchase an additional copy for each person
you share it with. If you are reading this book and did not
purchase it, or it was not purchased for your use only, then you
should go to melange-books.com and purchase your own copy. Thank
you for respecting the hard work of the author.

He was the world’s greatest martial artist –
a master of the world's deadliest art. Once revered, he became
feared, and for that he blamed his homeland. America was no longer
the land of the free and the home of the brave. It had become the
land of murder and the home of corruption. But for a man like Trent
Smith – it was the perfect hunting ground.

Biochemists have invented a drug that cures
all disease and stops aging, but a New York industrialist has kept
it secret for a specific purpose. He wants to form an exclusive
fraternity of immortal supermen, all of whom are beholden to him.
Only one thing puts a kink in his plan – the drug's side effects,
which include wild surges of increased sexuality and unpredictable
flares of homicidal rage.

Trent Smith has trained in Japan for over
twenty years and he has his own agenda. He vows to avenge the
innocents slain by the ever-growing number of American celebrities
who murder with impunity. But when a dying scientist gives him the
only copy of the secret formula, he must decide if the miraculous
benefit is worth the toll it takes on the prodigious people who use
it and their credulous victims who don't.

Killer of Killers
is an action-packed
martial arts thriller that pits one man's quest for justice against
the wonders of medical science. But wonders for some are horrors
for others in a secret society ruled by greed, malice, and a
singular objective to attain eternal youth.

All things seemed in their kinds to
be my enemies...

It seemed then to my apprehension
to proceed from indignation,

wrath, and as it were a gnashing of
teeth against me.

A true fanatic, his promptings were
reasons enough for his actions.

The question is not whether we will
be extremists,

but what kind of extremists we will
be.

It was a long time coming, but he made the
decision, and Dr. Samuel Bernstein rushed through the terminal a
different man. He wanted no more the role of absentee father and no
more the bane of negligent husband. No more research facility half
a continent away. Never again would he sweat ice in humid vaults of
bubbling vats and sterile test tubes. And no more nightmares—the
waking screams in halls of horror, the dire consequence of
scientific arrogance, soul-chilling visions of a holocaust
revisited.

Never again. For Samuel, the sprawling
biological laboratory in the Minnesota wilderness would forever be
a memory. A bad one. He carried a black leather bag in one hand and
pressed a cell phone against his ear with the other. Finally, an
answer. “Samuel?” It was Martha, his wife.

“I’m in the car, waiting. Hurry, before they
chase me away.”

Traffic was light, and Samuel gunned his BMW,
passing cars as if they crawled. Though red lights in the mirror
likely meant the end, it was a risk he had to take. “Where are the
twins? Are they packed?”

“At home, and they’re very upset. They still
don’t know why you’re doing this. You haven’t told us
anything.”

“I can’t explain. Right now, we must
disappear. All of us, disappear.”

“Samuel, you’re scaring me. What happened?
Why can’t you tell me?”

After pulling off the freeway and speeding
through his neighborhood, Samuel screeched his car to a stop in the
driveway of his tract home. “Inside, hurry,” he urged, but upon the
porch, his keys slipped from his grasp and rattled to the doorstep.
“Merciful God,” he groaned, “not now.”

Just as he spoke, the door unlatched from
within. Samuel hoped to see his daughters, but when the door
opened, his hope turned to dread. “You!”

The man’s name was Stiles, and he was huge—a
veritable giant dressed in a dark suit and tie. A wide-brimmed
fedora topped his black face, which split into a broad smile of
shiny white teeth. “Dr. Bernstein,” he boomed, “how nice of you to
not keep me waiting.”

“Where are my daughters?” Samuel snapped.

“Never mind them. Hand over the disc. I’m not
playin’ around.”

Samuel hesitated, but his wife didn’t. She
dodged the suited titan and bolted through the doorway. Samuel
shouted, “Martha, wait!”

“Wait,
my ass
,” Stiles growled. He
seized the lapels of Samuel’s coat. “I want the disc first and then
the bag. And if you don’t get smart and hand them over right this
minute—”

Chilling screams turned Stiles’ head, and
Samuel squirmed free of him. He dashed to a head-on collision with
his wife at the staircase. “They’re dead!” she wailed. Tears
streaked her twisted face. She clung to Samuel, gulping air between
agonized howls.

“No!” Samuel cried while craning his neck to
the upper floor. Then he glared at the hulk behind him. “You
murderer. You’ll never get the disc. Never in a million years!”

Stiles said, “I told you I wasn’t playin’
around.” A vicious backhand knocked Samuel’s glasses off his face,
and a punch to his jaw sent him over the coffee table and sprawled
on the living room carpet.

Martha screamed, “Stop it! Stop it!” but to
no avail. Samuel was dazed, and he realized that Stiles was
rummaging through all of his pockets. He saw Martha with a
broomstick. She whipped the man’s back again and again. At first,
Stiles seemed oblivious to the effort, but she continued the
flogging until he turned a frightful head.

Josh Jones preferred a low profile, and he
regretted his continuing inability to have one. He blamed his blond
hair, extreme height, and movie star looks more than anything else.
It’s why he dropped Benjamin off at the wayward doctor’s home.
Let him get the credit for recovering the disc
.

In his white Mercedes, Josh cruised the quiet
street, and as he circled back to the Bernstein residence, he spied
the parked BMW. He pulled over, stepped out of his Mercedes, and
squeezed an electronic key in his light gray sports coat. The
Beemer’s trunk popped, and he peeked inside. There sat a black
leather bag. “Hello,” he said. With a small bolt cutter, he broke
the bag’s padlock, examined its contents, and transferred it to the
trunk of his Mercedes. “That was easy enough.”

Standing tall, Josh panned the well-kept
houses lining the street. The tranquil scene triggered memories of
a carefree youth. Just as chirping birds and a cool breeze
embellished the reverie, crashing wood and shattering glass
assailed his ears. He spotted neighbors peeping through windows.
“Benjamin,” he said under his breath. “What the hell?”

Josh burst into the home, agape and
unbelieving. Benjamin was brutally pummeling the unmoving
Bernstein, spattering blood with every blow. It was only when Josh
snared a wrist on its back swing did the bedlam end.

“What the hell are you doing?” Josh yelled.
He peered at the beaten doctor beneath his partner and witnessed a
bloodied body that didn’t breathe. “You killed him. What the fuck.
You
killed
him.”

A quarter pivot revealed the doctor’s wife
slumped on the kitchen tile. “What? Her, too?” Josh hustled to the
woman and touched her neck. “What the fuck. She’s dead, too.”

Benjamin stood up and yanked on his
breast-pocket handkerchief. He removed his hat and wiped crimson
spots from his skin. With a shrug, he muttered, “I... I didn’t mean
it.”

Josh walked over to his colleague. Being the
taller man, he looked down at him and sneered, “You didn’t mean it?
Are you kidding?”

“You gotta believe me. All I remember is the
screaming. I couldn’t even find the disc. The damn fool wouldn’t
tell me where it was.”

“For christsake, man, it’s in the bag with
the rest of the stuff. Just now I took it from their trunk.”

Benjamin looked up, as if to peer through the
ceiling. For Josh, the ensuing moments were as painfully tense as
they were horrendously silent—until Benjamin finally said, “I think
I killed all of ’em.”

It could be said he was an
extremist. Those who came to know him might even agree. To be sure,
he was a man who lived for justice. At least for now. He called
himself Trent Smith, and he strode the L.A. Airport with a singular
purpose. A former football star was arriving tonight, and Trent
planned on meeting the infamous athlete face to face.

He scanned the crowded concourse and slouched
into a seat. The wait was brief, but for Trent it seemed like hours
before the disembarking passengers came pouring through the gate.
Antsy boarders crowded lanes in their efforts to be first. Babies
cried, children fussed, complainers made their case, and through
the constant chaos, Trent’s focus never swayed. The gate exuded
voyagers, and it was there he trained his eyes.

Within minutes, an unusually large black man,
wearing a pinstriped suit and wide-brimmed fedora, bullied forward.
With a black leather bag in hand, he paid no more attention to the
folks he swept aside than he might have given to pesky gnats. Once
the floor cleared, Trent rose from his seat and trailed the flock
of tired travelers. Unexpectedly, the big man veered into an
open-faced restaurant. Departing customers allowed him a wide
berth, and he promptly found the restroom in the restaurant’s
rear.