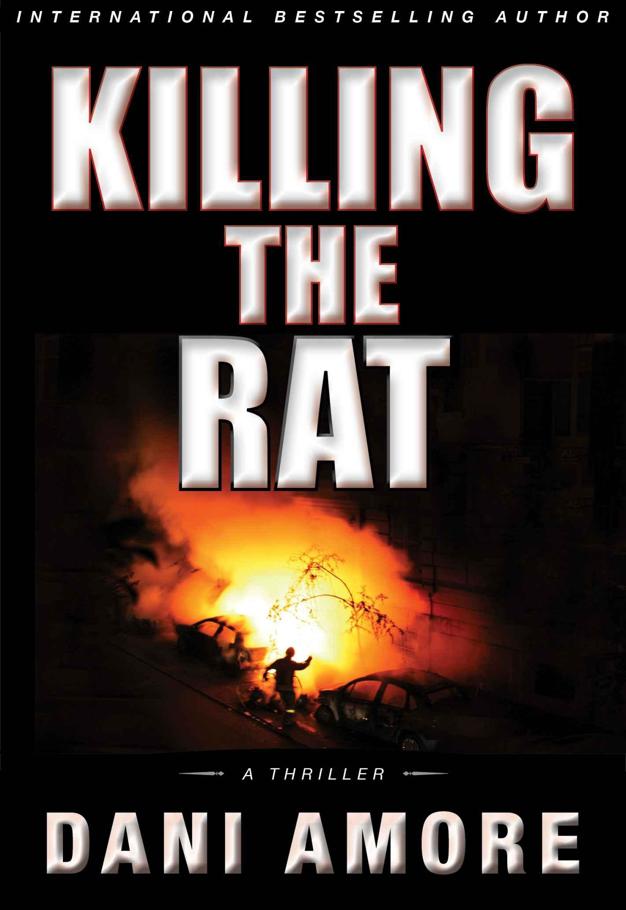 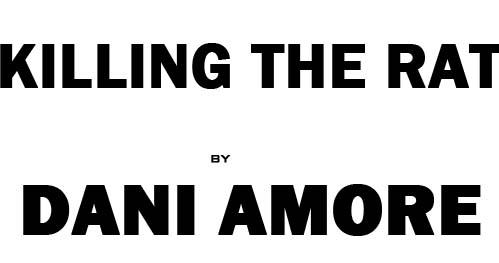 “Dani Amore writes fast-paced, gripping tales that capture you from Page One and hold you enthralled till the last word. This lady is one hell of a storyteller.”

“Dani Amore is a sensation among readers who love fast-paced thrillers.”

“Amore is definitely one to watch.”

“Dani Amore’s writing reminds me of the great thriller writers—lean, mean, no nonsense prose that gets straight to the point and keeps you turning those pages.”

“
Dead Wood
is a fast-paced, unpredictable mystery with an engaging narrator and a rich cast of original supporting characters.”

“As gritty as the Detroit streets where it’s set,
Dead Wood
grabs you early
on and doesn’t let go. As fine a debut as you’ll come across this
year, maybe any year.”

KILLING THE RAT is a work of fiction. Names, characters, places, and incidents either are the product of the author’s imagination or are used fictitiously. Any resemblance to actual persons, living or dead, events, or locales is entirely coincidental. All rights reserved. No part of this publication may be reproduced, stored in a retrieval system, or transmitted, in any form or by any means, electronic, mechanical, photocopying, recording, or otherwise, without prior written permission from the author.

To Find a Mountain

“I have learned to hate all traitors,

and there is no disease that

I spit on more than treachery.”

“Honesty is for the most part

It was time for Tommy Abrocci to make his move.

At the home of Detroit mob boss Vincenzo Romano, the only sounds were the birds and the gentle waves of the lake. The giant, ten thousand square foot English Tudor sat on Windmill Point Drive in all its breathtaking grandeur. It looked out over Lake St. Claire and the northern end of the Detroit River where freighters passed on their way to and from the Atlantic Ocean.

The home itself had eight bedrooms, ten bathrooms and five fireplaces. It was occupied by Romano and his wife Gloria. The Don’s consigliore, a man named Stanley Wessel, lived in the carriage house behind the main building.

It was early morning. A warm breeze stirred the treetops. Giant elm, cottonwoods and maples fluttered in the soft wind. The bluejays and cardinals sang at the black squirrels rummaging on the ground for acorns.

The sun, initially obscured by a thin morning layer of cirrus clouds, had burned the sky a clear blue. It was only ten in the morning and nearing eighty degrees. The early morning’s moist air had begun to dampen even more with the coming of the day. Warmed by the sun, it now felt thick and enveloping.

Romano was in Las Vegas, overseeing the tenuous foothold he was trying to establish in the casinos, via a connection with family members from Chicago. He was scheduled to return in the evening.

Tommy Abrocci was more than aware of Romano’s schedule. He’d thought of nothing else for the last three days. He’d lain awake, rehearsing the scenario over and over again. He’d slept less than five hours over the course of three nights. This morning, he’d looked in the mirror and had seen a man who looked like death warmed over. He’d forced himself to drop that comparison. It wasn’t a good omen.

But he’d had five cups of strong coffee. In fact, he’d packed the freshly ground coffee into the filter himself. As much as he could stuff in there. He wasn’t worried about being overly jumpy. That much caffeine would just bring him up to where he should be, counter the sleep deprivation he’d suddenly developed.

Tommy stood in Romano’s kitchen. He could see Lake St. Clair through the giant picture window in the living room. The natural light was brilliant in the morning, even the kitchen was brightened by the angle of the sun. Out on the water, Tommy could see a few small sailboats tacking toward the other side of the lake. Toward Canada.

It was quite a view. He imagined the big man standing here, his hands in the pockets of his bathrobe, making the big decisions of the business. Sometimes, even deciding who was to live or die. Simultaneously playing with his balls and people’s lives.

Bile rose in Tommy’s throat. Romano would be standing here tonight, no doubt, fantasizing about getting his thick hands around Tommy’s neck. Choking the life out of him. Tommy glanced out at the lake. Maybe he’d be out there tonight, sitting on the bottom wrapped in chains and an old tarp from Romano’s garage. Zebra mussels sucking on his face.

Stop it, he told himself. Negative thinking wasn’t going to get him anywhere. He’d read about visualization and all that in one of those motivational books. It all had to do with the power of positive thinking. Visualizing success, that sort of thing. Envisioning the future you wanted was half the battle.

Tommy did that. He imagined himself somewhere far away. A new place. A new town. And best of all, a brand-new name. He’d lose some weight, get a super short haircut, maybe even bleach it blonde for awhile. With all the golf and tennis and lying around on the beach, he’d be so tan no one would recognize him.

One thing he was sure of, though. There would be babes. Lots and lots of babes. Young ones. Old ones. Divorcees. Widows. Native island babes, maybe. Dark-skinned and dim-witted. That’s the way he liked ‘em.

Tommy savored his positive imagery for a few more seconds, then closed them up, like drawers in a dresser. He brought himself back to the present and went over his plan for the next twenty-four hours. He’d taken into account every contingency he could think of. All of the people who’d turned his life into shit were factored in. Even that fucking FBI agent who’d started the whole mess. It was a good plan, he thought with no small amount of pride. Everyone had made assumptions about Tommy Abrocci. They’d all made assumptions of the kind of man he was. Well, they were all wrong. They’d made a big mistake.

They all underestimated him.

He had a plan. And now, he just needed to execute it properly.

Tommy Abrocci drained the last of the black coffee from his cup, walked back into the kitchen and set it into the sink. He shook a handkerchief from his front pocket and wiped off the small bead of sweat that had formed at his hairline. He dialed a number on his cell.

He listened and a moment later he heard the sound of flesh slapping and a man’s voice began a low moan. Tommy rolled his eyes, pictured Nick Falcone tugging his cheek, letting it slap against the inside of his mouth to create the required sound effect.

“Hold on, Tommy,” Falcone said, his voice somewhat distorted. “I’m almost there.” Falcone’s moan escalated until Tommy cut him off.

Tommy pulled a .38 Smith & Wesson automatic from his shoulder holster. From his pocket, he retrieved the five-inch silencer. He screwed it onto the muzzle, then jacked a round into the chamber and clicked off the safety. He put the gun inside his waistband, camouflaged by his sportcoat. Hopefully, he wouldn’t need it. Hopefully, Falcone would do as he wanted. But if not, he’d take care of it. There was no going back at this point.

Falcone came in through the mudroom. He was a short, powerful man, nearly ten years younger than Abrocci. He wore a black T-shirt beneath a linen sportcoat and had on Armani dress slacks. Tommy knew that Falcone loved to take off the sportcoat and strut around in the designer T-shirt, putting his bulging muscles on display. On more than one occasion, Tommy had passed through the exercise room where Falcone sat pumping iron. Falcone would tilt his head down toward his arms and tell Tommy to “check out the pythons.”

Now, Falcone walked into the kitchen and smiled. “Tommy, I need to wipe my hand off, hand me that towel.” He smirked at Abrocci who ignored the request and instead tossed the younger man a set of car keys.

“Gloria wants raspberry scones. A half-dozen. From Great Harvest Bread. And bring back some of those little plastic tubs of honey.”

“Great Harvest Bread? Where the hell’s that? In the village?”

“Birmingham?” Falcone said, his thick brows rising in unison. “I gotta drive all the way out to Birmingham for scones? You gotta be kiddin’. Have Joe do it.”

Tommy figured he would say that. Which was why he’d sent Joe on a similar bullshit errand a half hour ago. He wouldn’t be back for hours. Tommy shook his head. “Joe’s busy. You’re up. You also gotta stop at Kroger, too. She wants butter. Sweet cream. Unsalted.”

“Jesus,” Falcone said. “She shouldn’t be eating butter in the first place. All that cholesterol. Has she had her cholesterol checked lately? I bet she’s way over 200.” Falcone was a weightlifter and subscribed to every men’s health and fitness magazine that was published.

“She didn’t ask for a check-up, Nick, she asked for some scones and butter, okay?”

Falcone raised his hands. “Fine, whatever.” He thought for a moment. “Mind if I stop at the GNC out there?”

Tommy shrugged his shoulders. Actually that would be perfect. “Sure. Running low on creatine?”

“That stuff’ll shrink your equipment. And from what I hear, you can’t afford to lose anything.”

Falcone shot him the finger and left for the garage.

A moment later, Tommy watched Falcone back the big Lincoln out of the garage, turn and drive down the long driveway. When the car disappeared around the corner, Tommy quickly walked up the mahogany staircase, past the textured plaster walls, down the long hallway adorned with expensive original artwork, and stood in front of the third door on the right.

It was Vincenzo Romano’s bedroom.

And inside, was Gloria Romano.

Gloria Romano examined herself in the mirror. Her skin was still wet from the shower, a towel was wrapped tightly around the dark hair that framed her face. Two big brown eyes looked back at her, a solid but not substantial nose, high cheek bones and a strong jaw. She was a handsome woman, but not a delicate one. Still, men desired her. Whether or not it was because of the power associated with her husband, or her own forceful personality, she didn’t know. And frankly, she didn’t care.