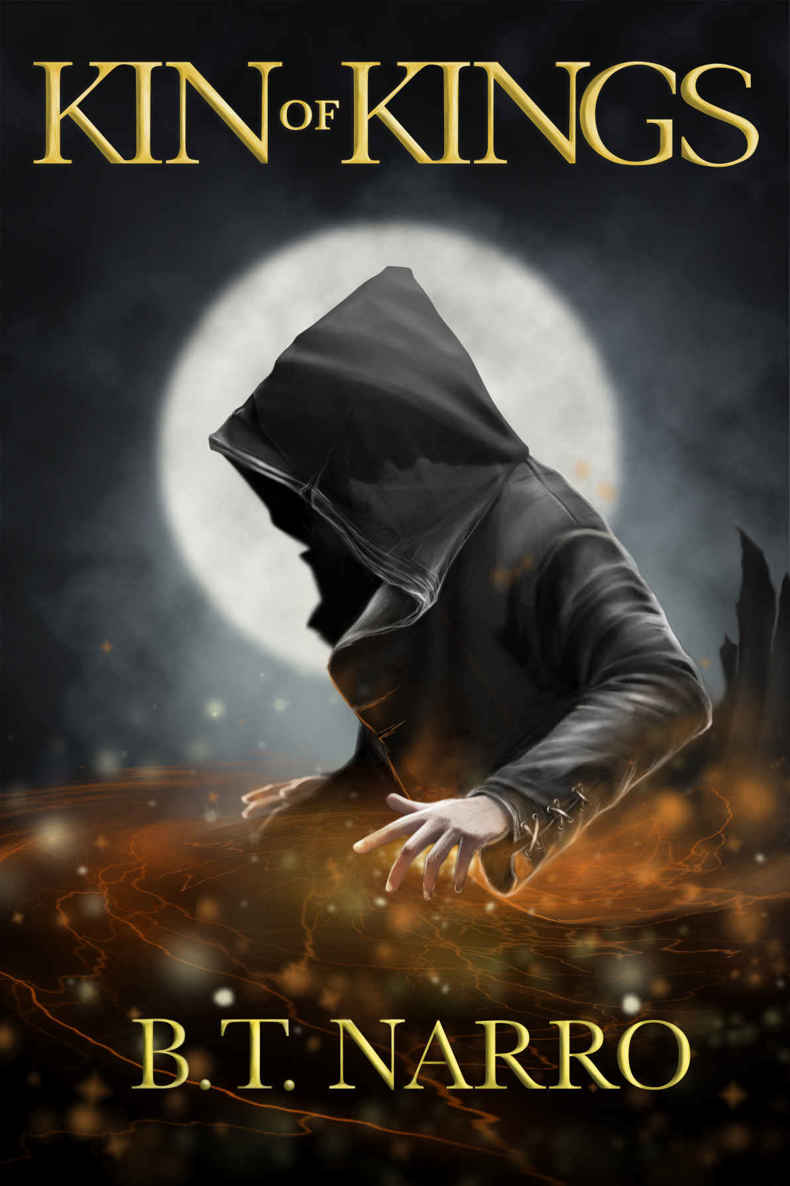 This is a work of fiction. Names, characters, places, and incidents are fictitious. Any resemblance to actual persons, living or dead, events, or locales is coincidental.

All rights reserved. This book may not be reproduced in whole or in part without the express written permission of the copyright holder.

Basen once heard that if a man couldn’t escape the workhouse in his dreams, then death would be his only release. After months of the same drudgery, he was beginning to believe it.

After being exiled from their homeland, Basen and his father had come to Kyrro—a territory of war-hardened people who regarded his family being on their land with the same abhorrence as discovering rats in their kitchens. However, living in Kyrro was the better alternative to being out in the wild and easy prey for Krepps.

Basen and his father figured it would be difficult to find work because of their surname, but “difficult” turned out to be grossly optimistic. Soon, the loathsome workhouse became their only chance to provide themselves with food and shelter. The workhouse administrator advised them to shed their Hiller surname and choose another while inside, a measure to protect them from the enforcers just as much as from the other workers.

No one called the workhouse a prison around the enforcers, but the high walls and the oppressive air could make men think of nothing else.

“We’ll just stay here until the war is over,” Basen’s father would say when they went to bed hungry. “Eventually Kyrro’s grudge against my brother will subside and we can find work.”

But the war had ended months ago and the grudge against the Hiller family remained heavy in everyone’s hearts, including Basen’s. His uncle may be dead, but the damage he’d done to Ovira lingered like fissures after an earthquake.

His father tried to find work, but each day Henry spent outside of the workhouse was a day he slept in the street and went hungry. Food and bed were earned only by those who remained in the workhouse, like Basen. Given his rare strength and even rarer youth compared to the others, he was appointed the more arduous tasks of breaking stone for roads or crushing bone for fertilizer.

As the months dragged on, Basen saw the lack of eating and sleeping catching up to his fifty-three-year-old father, and after enough pleading, Henry finally accepted his fate in the workhouse. He would take no more trips around the city of Oakshen looking for work.

There was one last hope for them to break the perpetual cycle of the workhouse: the Academy. Now that recruitment day finally had come, every hungry man between ages sixteen and nineteen nervously awaited the call. Basen had his father’s sheath strapped to his belt as he worked that day. In it was his father’s wooden training sword, the last of their possessions they’d brought with them from the castle after the exile. It bothered him that Henry had forced him to sell his wand and keep the sword, especially considering Basen had used the wand every day since he was a young child and he’d never seen his father use the supposedly beloved training sword. But the Hillers were sword fighters…at least according to Henry. According to everyone else, however, they were the blight of Ovira.

Every day at the castle in Tenred, Basen used to train with the most skilled swordsmen. He was exceptional, the best of his age. But he was even better with a wand.

Suddenly, men shushed each other to stop the incessant clanking and cracking of their hard labor. Beneath the fading din, Basen heard a bell chiming from outside the walls. He strained his ears to make out the coinciding announcement.

Nervous excitement buzzed around the workhouse. Henry showed Basen a dire look, as if he were marching to battle. “Are you worried?”

“How can I be when I stand before such a comforting smile?” Basen teased.

Henry stared blankly, still waiting for the answer to his question.

“Good. You shouldn’t be when you have more training than the rest of them.”

That might’ve been true months ago, but Basen hadn’t done any sword fighting since his exile. He pretended to let his father’s words comfort him as he smiled and nodded.

To his surprise, his father hugged him. “Come back with good news.” Then came the strong pat to his back he’d expected.

He left the workhouse with nearly twenty others his age. They were dirty, stinky, yet full of hope. He could see it in their eyes; they thought themselves to be better than the rest of this mangy lot. What only Basen seemed to realize, however, was that they weren’t in competition with each other but against the trained swordsmen who would make them look like fools.

Worender Training Center was the nearest training center to the workhouse, but it was in a less impoverished area of Oakshen a mile away. From what Basen had heard, recruitment day was the only time when a destitute young man like him would be seen within its metal fences, for city guards usually disallowed the untrained from entering. It seemed harshly ironic to Basen, but he supposed there weren’t many complaints. It wasn’t as if the poor had the time or energy to spar when working to survive took every hour of daylight.

Young men came from shanties to join their small posse, all of them wielding wooden swords that were of the same crude quality as their clothes. At least Basen had that advantage, for his father’s training sword was made of wood both light and strong.

But when he arrived at the training center, he saw there were no more advantages to claim. A line of strong, budding warriors twisted out from the open gates. Each formidable young man fiddled with a wooden sword of the highest quality. Their clothes made them appear like royalty in comparison to the dirty mob of novices approaching with Basen. A couple of the impoverished men lost hope right there, turning to go back to the workhouse where food and a bed awaited.

They’re the smart ones,
Basen thought, and almost turned around to go with them. But he clung to his small hope, or maybe it was just stubbornness by then. He couldn’t be sure.

Everyone but him filed into place at the back of the long line, quietly swallowing their shame and ignoring the snickers from the finely dressed young men in front of them.

That left Basen standing alone as he tried to determine his odds. He estimated he was one of three-hundred hopefuls. If what he’d heard in the workhouse was true, twenty swordsmen would be accepted into the Academy from this training center.

A one in fifteen chance.

But that wasn’t right, he soon realized. There was no chance involved. Really it was that he had to be a better swordsman than two hundred and eighty of them.

Is such a thing possible when I haven’t fought in months?

He watched two men duel as an older man looked on with a scroll and quill in hand. The two dueling were trained, ducking and weaving with grace and speed.

On the other side of the training center was the line for mages. It was so short! He squeezed by the line of rowdy swordsmen to walk into the training center for a better look. There were only twenty! Wishing his father’s wooden sword wasn’t at his hip, he approached the woman he identified as the mage recruiter given the scroll in her hand and her age above the others.

She seemed to be offering encouragement to a young woman nervously pointing a wand at a charred training dummy, but both stopped as they noticed Basen.

“The line for warriors is there,” the mage recruiter said with a quick lift of her chin in the right direction. She had a cautious look as if concerned Basen might be a madman for not realizing it.

The dirt caked into his clothes and skin filled him with shame. “I’m interested in proving myself as a mage. May you inform me how many are accepted from this training center?”

“Twelve,” she said with curiosity, her eyes no longer dismissive.

His heart skipped in his chest.
I only have to show I’m better than eight of them.

Not only were the odds better, but he would join as a mage instead of a warrior. When his three years at the Academy were finished, he’d be trained for a job in which he was paid to cast magic. The contract to the Academy required that he fight in any future war, but that didn’t scare him as much as the thought of spending the rest of his life in the workhouse.

“Have you trained as a mage?” The recruiter glanced at his belt. “I don’t see a wand on you.”

“I have trained, but I have no wand at the moment.”

“You can’t stand in line until you have one.” She looked back at the young woman. “Go on and cast.”

Clearly, this recruiter thought that would be it. But Basen was now determined. He would procure a wand if it cost him his shirt and pants and he was forced to prove himself in his undershorts.

He sprinted out of the training center. He would need time to scrounge up the necessary coin. Wands were no cheaper than swords, even considering their difference in size.

There was a small audience watching the warriors and mages from outside the training center. He asked every person for any money they could spare so he could buy a wand, earning nothing but a stomach full of humiliation as they snickered at him.