Kinetics: In Search of Willow 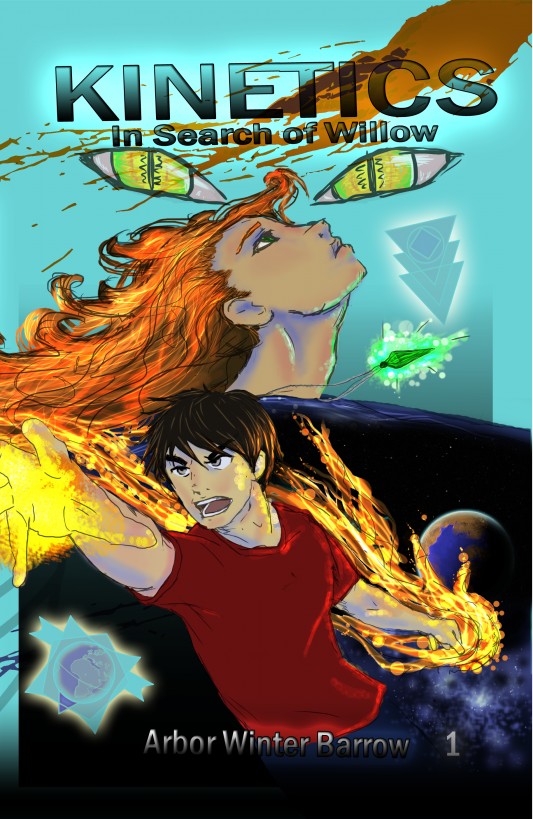 -In Search of
Willow- The people, some locations,
and most incidents in this book are fictional, any resemblance in
name or appearance is probably coincidental.

Chapter quotes (by real
people) belong to the person who spoke them and no infringement is
intended.

All of those people who encouraged
me, discouraged me, lifted me up, and tore me down. You have made
me stronger than you will ever know.

Without knowing what I was doing I
lunged forward and released a blast of fire from my fingertips. It
was bigger than anything I could have imagined possible. The ground
itself seemed to set on fire in front of me. In seconds I was on
the ground, Grey had tackled me and the fire I had produced was
raging out of control. My clothes were setting on fire as were the
clothes of Grey. I struggled under his scarily strong grip and the
fire continued to rage.

Grey was unaffected by the fire I was
blasting out. It was out of control now. I didn't have any more
control over it than an ant has over the weather. I started to get
scared. I couldn't stop it. Grey slammed his hand into my
head.

STOP.
I felt his voice in every crevasse of my brain. His
telepathic voice shuddered all the way down my spine.

My muscles locked and I stared
wide-eyed into his face. But something else was happening in my
chest. Tears started flowing out of my eyes and the pain in my
chest started to grow. I curled in on myself and clenched my chest.
I felt a fire like none other burning a hole. I looked down and saw
a bright light coming from where my heart was. And suddenly
everything went dark.

I should have prepared myself for
this. I should have known that I wasn't strong enough. But one
month ago failure was the furthest thing from my
mind.

“
Destiny is no matter of
chance. It is a matter of choice.

If I'd known that the last normal day
of my life would be spent pining over a girl, I might have made
some different choices. I probably would have been a little smarter
about my time, a little nicer to my mother, a little more forgiving
of my father. But, hindsight is like a wolf in sheep's clothing,
ready to bite you the moment you turn your back.

To say the least, I was not ready for
what was to come.

Instead, the last day of my normal
life began with a phone call to my friend Nick as I rode the bus on
the way to school one morning.

"Willow is the love of my life," I
declared to him. The loud conversations and shouts from the other
kids on the bus nearly drowned me out.

"You're fifteen,
Eugene,"
Nick said.
"I don't think you can make that kind of
statement."

I glanced out the bus window and
pressed the phone close to my ear to hear over the road noise and
the other kids shouting. Houses passed in blurs, coming into focus
only when the bus stopped to pick up another kid standing on a
street corner. I still hadn't gotten used to riding the bus
alone.

Willow lived within biking distance of
the school, so she never rode the bus anymore. When we were
younger, we lived on the same block and went to and from school
together every day. Before the Pattersons moved a couple years ago,
I had never been more than a mile from her at all times.

"She's mine, and that's all there is
to it," I said, sighing. "I really can't imagine going on without
her."

Nick was originally my brother's best
friend. They were the same age, and had gone to school together
most of their lives. They parted ways when Jacob joined the Peace
Corps at nineteen.

I was twelve years old when Jacob
left, and Nick had quickly inserted himself into my life as sort of
a substitute older brother. It didn't hurt that Nick was close
enough to my parents to come and go as he pleased.

The time after my brother left wasn't
an easy one. I thought I could never be as good as he was in my
parents' eyes. I felt the weight of my parents' high expectations
pressing on me. Jacob was good at everything. He excelled in
school, and decided to skip college entirely to start working with
the Peace Corps.

Having an older-brother figure like
Nick eased some of the tension. When I was thirteen, an argument
with my parents had made me decide to run away, but Nick talked me
into spending a few days with him on a trip to some universities in
New York instead. When we returned I wasn't angry with my parents
anymore and running away was the last thing on my mind.

Nick was the first one to teach me how
to play basketball. When he wasn't off on a business trip, he came
over every Saturday and played one-on-one with me, talking to me
about school and life in general. He listened to my frustrations
and my successes with an open ear and calm replies.

When I was fifteen I failed an exam
and after beating myself up over it for hours, Nick sat me down and
went over the whole thing with me. "You can't change a failure, but
you can learn from it and do better next time," he said.

He was usually the one I went to when
I had really important things to talk about, but he was out of town
that day, so I had to settle for the phone today.

My feelings for Willow didn't come out
of nowhere. I had known her for most of my life, and I'd recently
started to get the "warm fuzzies," as Nick liked to call
them.

“
Sure,
E-man,"
he said, still
laughing
. "I'm sure that will last about a
week, kinda like the period you're having right now."

"Nick!" I knew I was whining, but I
didn't care. I hunched into a ball and tried to avoid the sideways
glances my classmates were giving me.

Nick was having a great time at my
expense. He was treating my life-changing realization like a skit
on a comedy-hour show.

It frustrated me, but he was the only
person I really felt like talking to about it. The only other
person I would talk to about stuff like this was Willow, but since
Willow was the subject…Well, I had few options.

“
All right. Let’s say
that, hypothetically, she's the love of your life. Then what?
What's your game plan?"

He was still laughing, and I really
wanted to reach through the phone and sock him in the
jaw.

I scratched at a bit of gunk on the
window, taking my frustrations out on many years' worth of grime
and who knows what else.

Finally, I replied, "I don't know.
She's been hanging out with that senior, Harry."