Read King of the Corner Online

King of the Corner 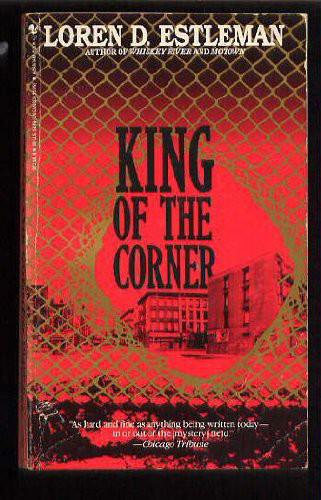 For Linda and Jeff Marl

the heart of the order

A Biography of Loren D. Estleman

Approximately ninety-nine and nine-tenths percent of the characters who inhabit
King of the Corner
are fictional creations intended to represent a tiny cross section of the population of the city of Detroit in our time. The remaining one-tenth of one percent are factual. Although their personalities and backgrounds are presented accurately, they have not been faced with the specific circumstances that occur in this story, and their reaction and behavior are pure speculation. This is what makes
King of the Corner
a work of fiction.

During what should be rush hour, reporters from the
Free Press
play a macabre game, called King of the Corner. The object is to stand at a downtown intersection and look all four ways. If you can’t see a single human being in any direction, you are King of the Corner. Every morning anoints its own royalty. Detroit, America’s sixth largest city, is the only metropolis in the country where you can walk a downtown block during business hours without passing a living soul.

And Other True Tales of Detroit

When I came up to Detroit I was just a mild-mannered Sunday-school boy.

GRANNY AT THE BAT:

Loyola MacGryff hasn’t missed an opening day at Tiger Stadium since her father took her to her first game in 1908.

Mrs. MacGryff, who has lived at her present address on Trumbull near the stadium for most of her 87 years, remembers that day as clearly as if it were last Saturday.

“The colors—I never saw so many in one place at one time,” she recalls. “The men all wore straw boaters and the women were dressed like Easter Sunday. And, oh, it was noisy! People were much more vocal then. Papa asked me if I was scared. I said, ‘Oh, no, I want to see Ty Cobb.’”

“Not that time. He was out with a groin pull, only they didn’t say that then, they just said he hurt his leg. But I saw him lots of other times.

“He wasn’t a kind man, that Mr. Cobb. Once this boy in the row in front of me leaned over the rail and touched a fly ball Mr. Cobb was running to catch and put it out of play. The Orioles scored a run on it. Well, he just jerked that boy clean out of his seat and went to beating on him till the rest of the team ran out and pulled him off.

Tragically, young Loyola’s fateful first trip to Navin Field (as it was known then) had been intended for her older brother Paul, but he was in the hospital recuperating after a trolley car accident claimed both his legs.

“We wanted to bring him a souvenir ball, but we were out of luck that day so Papa bought him a pennant at the stand. He kept it on his wall till the day he died.”

Eighty-one opening days later, Mrs. MacGryff’s record remains pristine, although there have been close calls along the way.

In 1924, when it seemed that her first child would make his appearance close to that all-important date, she had the baby delivered by cesarean section two weeks early.

A flat tire and a night in jail for husband Horace when he declined to pull over for a motorcycle patrolman were the cost of a timely arrival in 1930.

“But 1935 was the closest I ever came to missing,” says this blue-eyed, apple-cheeked grandmother of eight. “Horace got beat up on the picket line at Ford’s and died of a brain hemorrhage, but I postponed the funeral a day.

“That was the year we beat the Cubs in the Series and it was grand to see Charlie Gehringer come to bat for the first time in one of his best seasons. I got my picture taken with him outside the door where the team came out after the game.”

T
HE DAY BEFORE
D
OC
Miller was released, a hammer murderer named Ed Friend blew his one-hitter to hell with a two-out double in the bottom of the eighth.

Blaize Depardieu, the team manager and a 1982 second-round draft choice for St. Louis currently doing eleven to twenty for rape, came out to the mound and turned on his thousand-candlepower grin. “Man got a hell of a swing, that’s why he’s in here,” he said. “Don’t sweat it.”

“I’m not,” Doc said. He struck out the last man and retired the side in the ninth with a strikeout, a pop fly to center field, and a grounder to first. Afterward Depardieu gave him the ground ball signed by everyone on the team, a roster of killers, rapists, drug-runners, and state congressmen that would have kept a city block in terror for a month. “Gonna miss you in the Milan game,” he told Doc. “Talk is they’s transferring a embezzler from Marion that bats three-eighty.”

“Earl can handle him if you can get him to lay off that knuckleball. Every time he tries it his control goes to hell.” Doc turned the ball around in his hand, unconsciously lining up his fingers with the seams. Standing there in the shower room with its stench of sweat and mildew, he suddenly realized he had pitched his last game.

The grin illuminated Depardieu’s blue-black face. “Getting sprang tomorrow, Stretch. You look like they’s fixing to feed you the gas.”

“All of ’em. Lookit Gates Brown and Ron LeFlore.”

“They was over the hill when they went in. You’re what, thirty?”

“Thirty-three-year-old with a ninety-mile-an-hour fastball and a split-finger that Henry Aaron couldn’t hit on his best day.”

“Nobody ever heard of Brown and LeFlore until they got out and joined the majors. I took my headlines going in. Nobody wants a southpaw with a sheet.” He smacked Depardieu’s naked muscular shoulder with his open palm. “You’re a great manager, Blaize. You’d be in the Show now if you’d kept it in your pants.”

“What I should of did was send flowers.”

The next morning, Doc put on a gray suit of clothes and tried the necktie that had come with it, but too much time had passed since he’d had a knot at his throat and he rolled it up and put it in the side pocket of his jacket The suit was one of his old ones and the lapels were out of fashion, but it still fit which was why he had asked his brother to send it to him instead of putting on one of the ready-mades the state provided. Doc stood six-five in his socks and weighed less than two hundred. Suits that weren’t made especially for him tended to fall way short of his wrists and ankles when they didn’t wrap twice around his waist

As a matter of fact the trousers were a little snug, but that was penitentiary food. They fed you well in Jackson, lots of mashed potatoes and fatty pork chops and buttered vegetables, on the theory that an overweight prisoner was less likely to hoist himself over the wall. Doc, who was indifferent to food, would start dropping pounds without even thinking about it as soon as he was outside.

Kevin Miller had become Doc back in double-A ball when it got around that he had studied pharmacology for a year. The gold-rimmed glasses he wore to correct astigmatism, with a clip behind his head to keep them from sliding off during his follow-through, had made the nickname stick when he joined the Tigers. That year he had fourteen saves and was on his way to a Cy Young Award when the Detroit Criminal Investigation Division got to him first

As a starter for the Southern Michigan Penitentiary at Jackson he had won 116 games in seven years. The team played fewer than a hundred games a season.

He evaluated his buzz cut in the mirror over his sink and decided he wouldn’t grow it out much. Styles had changed since he’d left his collar-length mane on the floor of the prison barbershop, and the look took a couple of years off him. The black hair and his cheekbones came courtesy of some Cherokee blood way back on his mother’s side; for the rest he was German-Irish and a third-generation native of Kentucky. In high school it had seemed strange to be swinging an aluminum bat with the company that made the Louisville Slugger operating just forty miles away. When he’d mentioned this to his coach, the coach had slapped him on the butt and said, “Play. Don’t think.”

That was one piece of advice Doc wished he’d forgotten.

Earl Hardaway, the other starter and a trusty with six months to go on a one-to-three for reckless endangerment, unlocked Doc’s cell. He was a chunky redhead with freckles the size of dimes, one blue eye and one brown, and an appointment to check in with the Tigers’ front office the first Monday after his release. His fastball had been clocked at ninety-nine miles per hour. That was six less than he had been doing the night he wrapped his father’s Porsche around a dead elm, fracturing his left ankle and turning his girlfriend into a paraplegic.

“Mopping C Block. We traded. I didn’t get a chance to say good-bye after the game.” He turned his blue eye on Doc. Earl thought he saw better out of it, although the ophthalmologist who visited Jackson had told him he had twenty-twenty vision in both. “I got the knuck down now.”

They were walking down the corridor. Doc shook several of the hands dangling between the white-painted bars of the cells. He felt like Jimmy Cagney walking the Last Mile. He had to remind himself he was being freed. “You’ve got the heat and a good sinker. All you need’s a curve you can count on and Blaize will show you how to throw that.”

“I’ll need more than three pitches if I’m going to be in the Show.”

“That’s one more than Koufax had. Your knuckle-ball can’t find the plate.”

“You can fan them out and still give up first while the catcher’s chasing the ball all the way to the backstop. You’ll never see the Show if you make your catchers look bad. They’re mean sons of bitches. They’d pass up a shot at the pennant to send down a cocky pitcher.” He stopped before the door at the end of the block.

The face that came to the gridded window when Earl banged on the door didn’t have a name. The turnover among guards was high; there would be no warm handshake at the gate or snarled “You’ll be back.” This one unlocked the door, swung it open, and made an impatient noise when Doc grasped Earl’s hand. “When Grant Hoover gets to first in the Milan game, keep him there if you have to go over there a hundred times. If he steals second you might as well hand him third. I don’t know what he’s in for, but it must’ve been purse-snatching.”