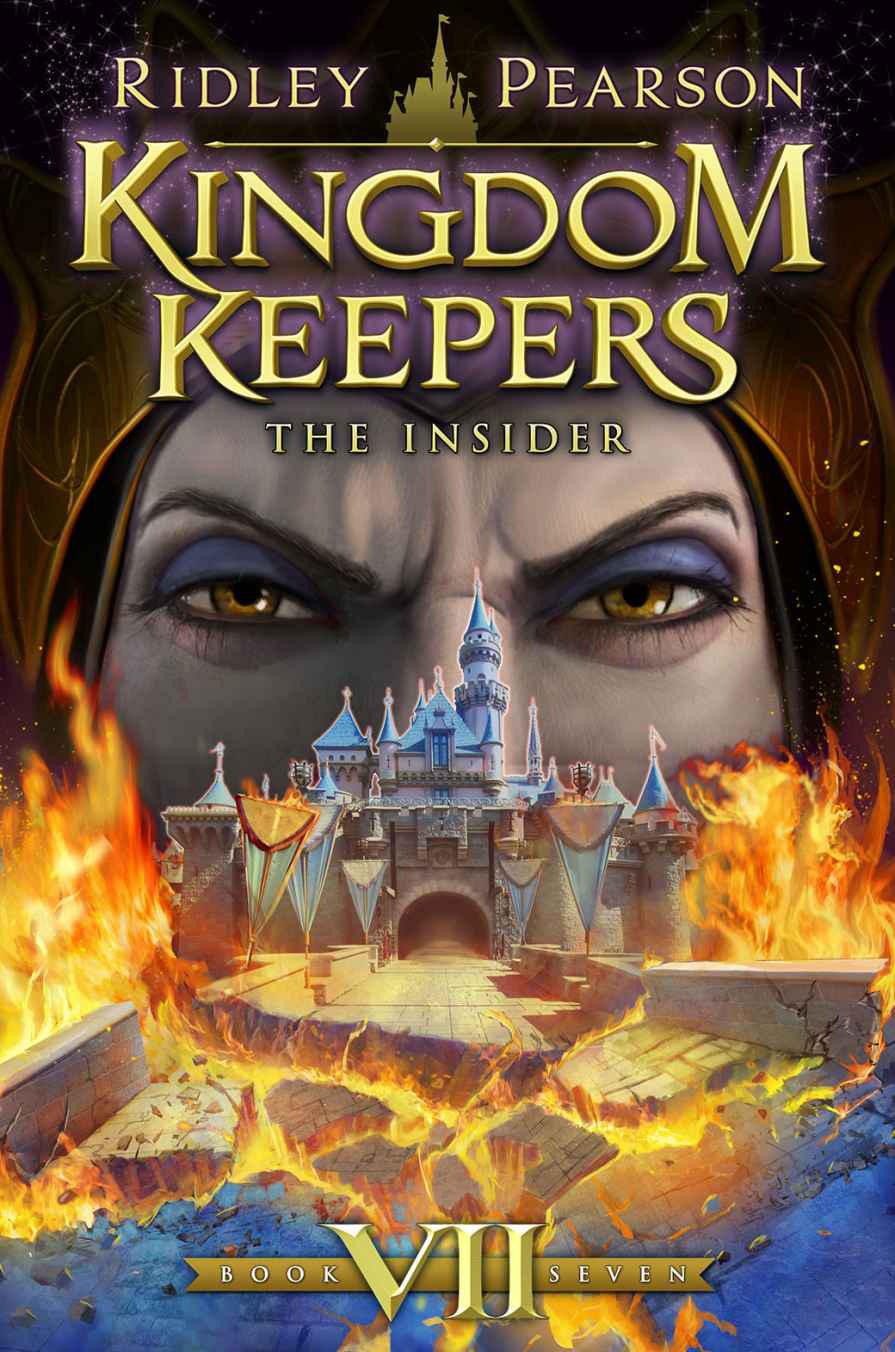 M
YSTERIES AND THRILLERS (FOR GROWN-UPS)

All rights reserved. Published by Disney • Hyperion Books, an imprint of Disney Book Group. No part of this book may be reproduced or transmitted in any form or by any means, electronic or mechanical, including photocopying, recording, or by any information storage and retrieval system, without written permission from the publisher.

This, the final installment of the Kingdom Keepers, is dedicated to all the hardworking Disney Cast Members and Imagineers who provide the rest of us with boundless entertainment in the parks, on the ships, and on our television and movie screens. I also offer a metaphoric tip of my hat to those who are right now dreaming of things yet to come. We can’t wait!

No dedication would be complete without thanking you, the reader, the Insider, who has come along with me on this ride. What a thrill it has been and continues to be. It ain’t over yet.…

Have nothing to do with the fruitless deeds
of darkness, but rather expose them.

A
BOUT
T
HIS
B
OOK

Somewhere around the time
Kingdom Keepers IV: Power Play
was published, I was thrilled to discover that the books in the series were being read multiple times—not just twice, but six, nine, even eleven times!

As a writer, I’m an outliner—I want to know where my story (and the series) is going before I get behind the wheel. Now I don’t always strictly follow this outline; but if I don’t, I modify it as I go to allow me to reach a satisfactory ending.

In writing the final book—
Kingdom Keepers VII
—I faced a difficult decision. Write the novel as outlined, or—and here was the tricky part—seek input from my readers about
how the
series should end
. Eventually, I became obsessed with the idea that Kingdom Keepers like me should be able to direct the conclusion of the series.

After months of conference calls, e-mails, and planning, Disney-Hyperion hired an e-book publisher, Coliloquy, to create a free app and Web site called Kingdom Keepers Insider. The idea was that I would post an outline for a new chapter each week, and Kingdom Keepers Insiders would vote on direction, setting, and character. I would then customize that week’s chapter, post it, and start the process all over again. I also asked Insiders to write in response to specific challenges. If we felt the writing was strong enough, I would edit the excerpt and place it in the novel. My readers would literally help me write the book.

The first day we opened the Kingdom Keepers Insider app/Web site, we had 1,000 people register—three times what I expected for the entire run. That week we had more than 700 fiction entries. By day three, we had crossed 5,000 registered users. Ten days in, we passed 16,000. On one Friday night in May, we received more than 1,700 fiction entries responding to my request for help with a certain passage. That is, college, high school, and middle school students were staying home to
write
on a Friday night!

Soon, we’d reached 50,000 registered users and over 150,000 regular visitors. We had people from all over the world and all 50 states voting on the direction of my outline and submitting writing pieces.

The result is
Kingdom Keepers VII: The Insider
. In these pages you will occasionally notice the

logo. This denotes the start of an Insider’s contribution. The contributed passage is followed (and closed) with a number. Clicking on this number will take you to the Insider Credits page, where you’ll see the Insider’s User_Name. (To return to where you were reading, click on the same number in the Insider Credits section, or use the “back” feature on your device.) Because the Insider environment is anonymous, we didn’t know who these wonderful writers were. Only as the project neared its end did Disney contact the “winners.” Some of these writers and their parents agreed to use their real names, and these are listed at the back of the book.

Together, we crowd-sourced the writing of a novel! It was an exciting, always entertaining, never-a-dull-moment experience that we may repeat on a future project. Thanks to each and every Insider. There were so many incredible writing pieces submitted. The choice was never easy. Everyone who contributed helped “raise the bar” and improve the contributions week to week. It was as if we were engaged in a six-month writing seminar. I hope the Insiders learned as much as I did. Learning as a writer never stops!

Thank you to my readers, and especially the Insiders, for thrilling to the stories as much as I do, for telling your friends and families about the books, and keeping the Keepers alive! I’ve said it before, but I’ll say it again: I have the best (writers!) readers an author could ask for.

S
HE HAS BEEN CALLED MANY THINGS:
the Black Mamba, Calypso, Tia Dalma. And worse. Much worse.

The scratching of rat claws on stone at her bare feet is accompanied by the disturbing squeals of the rodents as they stream past. Consumed by the darkness of the tunnel, she shuffles forward, her toes stabbing into the void like a cockroach’s antennae.

Her stubby fingers feed twine from the ball she carries. Slowly she plays out the lifeline, measuring the ball’s diminishing diameter with a slight pressure of her left thumb. It is the third such ball she has knotted, one to the other, in as many days. She has no idea how long it may take for her captors to realize she has escaped; some spells outlast time itself, others prove themselves fleeting.

The string now stretches more than fifteen hundred feet behind her—nearly a third of a mile—as it winds through the unmarked turns and dead ends of the Devil’s Labyrinth, the name she has given this seemingly endless underground maze. Carved from caves by an ancient civilization, the interconnecting subterranean passageways might have once connected temples or burial monuments, might have provided safe harbor from hurricanes or served as death traps for exiled citizens, prisoners, or the sick and elderly. Her torch burned out twenty minutes and two tunnels ago. She has considered going back, chasing the twine to the daylight, but what would be the point? Though she cannot see in the dark, Tia Dalma is not without her ways. She has her voodoo, her visions, is able to direct wormholes through reality to sense Danger, Desire, and Death—the three Ds.

She does so now, but detects only the worry and scurry of the rats and a looming menace that hangs like a stink. Bad things have happened here. Evil stains these walls. Where some would feel fear so intense as to set teeth to gnashing, this woman warms at the very thought.

A slight breeze, fainter than the breath of a bumblebee bat, flutters the two mole whiskers on the underside of her chin, tickles her tattooed eyelids with delicious warmth, fills her dilated nostrils with the fetid odor of moldering organic matter. Proof of life. Somewhere, perhaps far from her current position, perhaps as near as the other side of a two-ton slab of rock, something lives. Or it once did. Candidates include blind wolves, dead snakes, dragons, or bubbling gases from the corpses of sacrificed animals stacked like cordwood two thousand years earlier. Tia Dalma picks up on it with the instincts of a bloodhound. Won’t let it go. Sniffs the air loudly as she pursues the frail thread of decomposition.

The twine uncoils as the ball spins on her fingers. Even a maze as complicated and devious as this must contain compromises, secret passageways connecting one to the other, hidden exits, covert companionways. This whiff of decay is her first encouragement. But it proves fleeting, no more than a temptation to hurry her forward to the fraying end of her rope, where she stops, eager to press forward even without the connection back.

Not daring to release the twine, she stretches her body, pushing her fingertips as far as she can reach, tickling the dark with pointed purple nails like a relay runner reaching for the baton. It is a risky business, this, for she could inadvertently release the stretched string and send it recoiling from her, elusively difficult to locate. Divorced from the certainty of survival, a person could go mad in such darkness.

But Tia Dalma is no person. If she were, she would prove herself less susceptible than most: she’s mad already.

Once again the fetid, rank odor of rot overcomes her. It comes from stone rubble to her left caused by a cave-in. She approaches and begins to dig, driven by a gnawing suspicion that whatever corpse is causing this foul report, it is meaningful to her, pertains to her. This thought causes a spike of energy, determination and—dare she admit it?—apprehension.

The digging is surprisingly easy. She pulls a stone loose only to cause a small rockslide. The grave comes open for her. A few more rocks is all and—

She gasps as her fingers touch not rock but scales—large scales, the size of dinner plates, but with the rough texture of giant fingernails.
Dragon scales,
she realizes. She howls into the dark like a lone wolf. Maleficent transfigures herself into a dragon—
or did
, Tia Dalma realizes. No longer. In her mind’s eye she can see the willful boy who trapped and killed one of the greatest practitioners of black magic ever to live.

The boy who did this!

A second haunting cry reels though the catacombs. It’s a high-pitched complaint tinged with pain and anger, grief, and agonizing uncertainty. There should be others even if the one is lost. The Evil Queen. The Beast. Tia Dalma has made it her charge to collect these principals and rebuild. No battle is without losses; no army survives with all its generals. Hope is ephemeral, defying her wish to hold on to it. Who needs hope when there is hate to take its place? Who needs even hate when there is an attack planned for later this same night many, many miles to the north? An attack set to bring the Kingdom to its knees?

With one hand she searches the rubble and makes contact with neither wood nor rock. She pulls hard, extricating what turns out to be a length of bone, her treasure found. Still, she has not let go of the twine. She twists it in her fingers as she reverses direction, begins collecting the twine around itself, the ball in her hand growing thicker as it directs her back along a route well traveled.