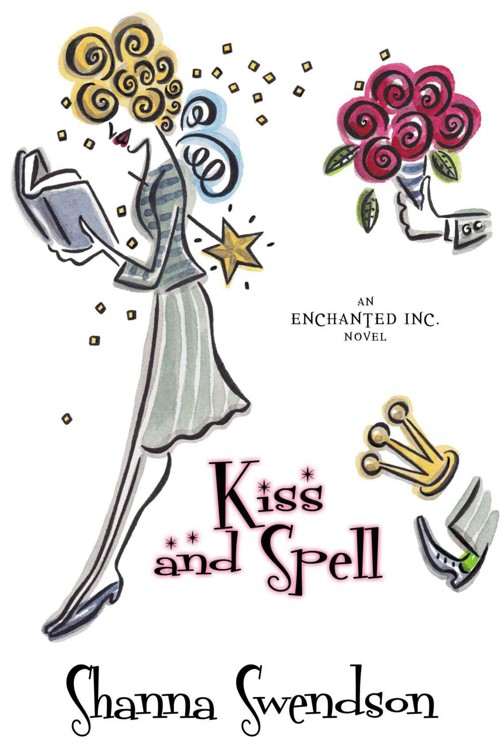 Writers work hard to support themselves. Please help them by buying their books from legitimate sources. The scanning, uploading and distribution of this book via the internet or any other means without the permission of the publisher is illegal and punishable by law. Please purchase only authorized electronic editions, and do not participate in or encourage electronic piracy of copyrighted materials. Your support of the author’s rights is appreciated.

Books in the Enchanted, Inc. Series:

Much Ado About Magic

No Quest For The Wicked

They were expecting me, but I didn’t think they’d be expecting
this
. I arranged myself in the doorway and waited for them to notice me. I was just wondering if there was a sexy way to clear my throat to get their attention when Owen Palmer looked up from his notebook and said, “I’m sorry, but you’re not supposed to be here. I’ll call for someone to escort you out.”

On the one hand, it was nice to know that my boyfriend’s head wasn’t easily turned by every curvy blonde who came along. On the other, his lack of reaction made me wonder if I’d missed the mark. Rod Gwaltney’s reaction was more like it. When he noticed me, he looked like a cartoon wolf, with his eyes popping out on springs and his tongue unrolling to the ground. Yeah, I’d done it right, I thought, ever so smugly.

I dropped my voice down an octave or so and tried to create a hoarse, breathy tone that fit my bombshell exterior to say, “I thought you were expecting me.” I didn’t think that sounded like my usual voice, but Owen frowned in suspicion. Rod was still ogling me. I had to bite my lip to keep myself from smiling. This was too much fun. Then it became absolutely impossible for me to keep a straight face one minute longer, and I dissolved into giggles.

“I think she gets an ‘A’ for illusions,” Owen said with a smile as I let my va-va-voom illusion drop. “Nice work. You had us fooled. Where did you get the image?”

“From the Victoria’s Secret catalog, though I added clothing,” I said as I crossed the room and took a seat at the table where the guys were. I conjured myself a cup of coffee, not so much because I needed it but because I could, and that was a trick I never got tired of doing. “And, you know, that illusion stuff is harder than it looks—not so much the magic part as all the stuff that goes with it to make it convincing.”

Rod made an “ew, I just mentally undressed my sister” face but said, “Yeah, the trick to making an illusion work is to create the whole character: the voice, the walk, the body language, the attitude. Once you’ve got all that down, the magic is just the finishing touch.” And he should know, since he regularly relied on an illusion to make himself more handsome. Until very recently, it hadn’t worked on me, but a freak incident had turned my magical immunity into magical powers, so magic now worked on—and for—me.

Which was why I was there in an improvised classroom in the bowels of the Magic, Spells, and Illusions, Inc., headquarters building. Rod was teaching me to use my newfound powers, while Owen was studying me to see how my magic worked. Apparently, my situation was rather unprecedented.

Rod continued lecturing me. “Most situations require only minor disguises, like a different hair color or clothing, but for more extensive alternative identities, I’d recommend creating a few regular characters. Work on those characters before you even add the magic, practice their voices and body language, and then it’ll be easier to pull off the illusions.”

“Not that she’s likely to need to create any alter egos,” Owen said.

“In our line of work?” Rod countered. “You never know when you’ll need a good disguise. Just remember, the attitude—the nonmagical part—is what’s most important.”

“I would think, then, that if you got good at the attitude you might not even need the magical part,” I said with a meaningful look at Rod. He was making improvements and had dropped the attraction spell he used to use along with the handsome illusion, but I still hadn’t managed to convince him that he could be attractive as himself. Although the illusion was better-looking, I missed seeing his real face.

He ignored me and changed the subject. “We should start working on defensive spells. Without your magical immunity, you’re vulnerable to attack spells, so you’ll need to be able to defend yourself.”

“But only in extreme circumstances,” Owen put in.

“That’s so annoying,” I said with a sigh. “I have magical powers, but can’t use them outside this room.” But I knew why. The same incident that gave me magic had restored Owen’s lost powers. Things in the magical world were still too touchy for that secret to be let out, given that Owen’s birth parents had been evil wizards. Our enemies had revealed that fact to discredit him, and now most people in the magical world distrusted him. His life was easier while his restored magic remained a secret, and that meant my newfound powers had to be a secret too.

“I’ve developed a few shield spells that mimic the effect of magical immunity,” Owen went on, passing some handwritten pages to Rod. “They’d block and dissipate any attack spells. The use of magic would be apparent to anyone who’s really paying attention, but in the heat of a fight when there’s a lot of magic flying around, no one should notice.” He gave me the shy smile that always made my knees go weak and added, “After all, us being affected by magic would also reveal more than we’d like.”

Then we settled down to the lessons. Owen was developing spells for me to learn, but Rod handled the teaching. It had turned out that Owen, while being an expert in the science and theory of magic, wasn’t a very good teacher. He used magic instinctively, so he was impatient with anyone who didn’t automatically grasp it the way he did, and he didn’t understand the need to break it down into steps. Instead, he studied the way my magic worked while Rod worked through preschool-level magic lessons with me.

Or maybe elementary-level. I must have worked my way at least to second grade by now, which was pretty good, considering I’d only been working at it for a few weeks. My job for the time being was to learn enough to be useful and play guinea pig for Owen’s research while still putting up a front of doing my old marketing job at the company.

Rod jotted a few notes on Owen’s spell—probably adding those necessary steps that Owen forgot to mention because they were instinctive to him—then said, “Yeah, I think this’ll work. Let’s see what you can do. Owen, I’ll need you to provide an attack in a second.”

I listened as Rod talked me through the combination of words, mental images, and magical control needed to carry out the spell. I had to memorize and then internalize the words so that all I’d need to do was think them to make the spell work. Once I got that down, the rest was easy because the magic just flowed for me. I was having more fun learning magic than anything else I’d ever studied. It was truly
awesome
.

“Okay, I think you’re ready to test it,” Rod said with a satisfied nod when I’d mastered the magical manipulations. “Owen, something relatively harmless and visible, please.”

I maintained the spell while Owen sent a ball of light flying at me. I fought not to duck and to focus on my spell as the ball came toward me and then fizzled harmlessly a fraction of an inch away from me.

The guys turned to each other. “Whattaya think?” Rod asked. “Did it look like a shield to you, or just like magical immunity?”

“It looked like a shield, but only because I know what to look for. In a real-world setting with a fight going on, I think it should be okay. They’re not going to just use fireballs, and it’ll be less obvious in blocking other spells.”

“So while I’m doing this, no one can turn me into a frog?” I asked.

Owen grinned. “No, you should be safe from that.”

“People would notice the magic,” Owen said. “And it’s an energy drain. If I did some tinkering, though, it might be commercially viable as a shield for certain situations, like the magical equivalent of body armor …” His voice trailed off as he started mentally developing the idea.

“I think we’ve lost him for the day, and he may have just made his next million,” Rod said with fond amusement. “Now, let’s see how fast you can put that spell up.”

He drilled me in spells for the next hour while Owen scribbled frantically in his notebook, occasionally mumbling things to himself. I knew I should have been exhausted by the time the lesson ended, but I was exhilarated. I felt like I’d finally found something I was really good at. “You’re a natural,” Rod confirmed with a proud smile.

“Not too natural,” I said. “More like a freak of nature.”

“That just means you’re special,” he said, patting me on the shoulder. “Now I’d better get back to work. I’ve got a ton of paperwork waiting for me that I wish I could magic away. It’s strange how many people are just not showing up to work these days. Same time tomorrow?”

“Yeah.” I shot him a grin over my shoulder as I headed out of the room. “And you never know who’ll show up.”

Owen joined me on the way out, and as soon as we were out of earshot of the schoolroom, he said, “Although that illusion was nice work, I like what’s behind it a lot better.”

“Oh, you charmer,” I teased, though inwardly I really was quite pleased. It had taken me a long time to get used to the idea that a guy as movie-star handsome as Owen—and a powerful wizard on top of that—was into me, when I’d always thought of myself as ordinary in a forgettable way. Owen was a certified genius, so it was unlikely that he was wrong. I still wouldn’t turn heads on the street unless I put on my lingerie-model illusion, but I didn’t need to if Owen liked what he saw.

“Rod’s right, you really are a natural. I don’t know if you’re picking magic up so quickly because you’ve been around us enough to absorb some things or if you inherited more from your grandmother than you realized, but your progress is rather astonishing. You’ve already mastered the basics, and soon we should be able to figure out where your particular talents lie.”

“Not that it’ll do me much good if no one can know I
have
talents,” I grumbled.

“The further we get from that incident, the less likely it will be for people to suspect your new powers might also mean my powers are back.”

Angel in Scarlet: A Bound and Determined Novel by Lavinia Kent
Reckless Hours: a Romantic Suspense novel (Heroes of Providence Book 3) by Lisa Mondello
The White Pearl by Kate Furnivall
What Became of the White Savage by Francois Garde
Trinity Fields by Bradford Morrow
Destined for the Alpha by Winifred Lacroix
Collins Cobuild English Grammar by Collins
Miss Westlake's Windfall by Barbara Metzger
By The Sea, Book Four: The Heirs by Stockenberg, Antoinette
The Wand & the Sea by Claire M. Caterer
Our partner