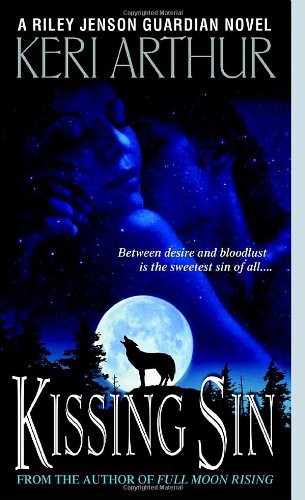 Now is your chance to fully immerse yourself…

My wonderful agent, Miriam; editor extraordinaire,
Anne; and everyone at Bantam who helped
make this book possible.

This book is dedicated to the two people in my life
who matter the most—Pete and Kasey.

A
ll I could smell was blood.

Blood that was thick and ripe.

Blood that plastered my body, itching at my skin.

I stirred, groaning softly as I rolled onto my back. Other sensations began to creep through the fog encasing my mind. The chill of the stones that pressed against my spine. The gentle patter of moisture against bare skin. The stench of rubbish left sitting too long in the sun. And underneath it all, the aroma of raw meat.

It was a scent that filled me with foreboding, though why I had no idea.

I forced my eyes open. A concrete wall loomed ominously above me, seeming to lean inward, as if ready to fall. There were no windows in that wall, and no lights anywhere near it. For a moment I thought I was in a prison of some kind, until I remembered the rain and saw that the concrete bled into the cloud-covered night sky.

Though there was no moon visible, I didn’t need to see it to know where we were in the lunar cycle. While it might be true that just as many vampire genes flowed through my bloodstream as werewolf, I was still very sensitive to the moon’s presence. The full moon had passed three days ago.

Last I remembered, the full moon phase had only just begun. Somewhere along the line, I’d lost eight days.

I frowned, staring up at the wall, trying to get my bearings, trying to remember how I’d gotten here. How I’d managed to become naked and unconscious in the cold night.

No memories rose from the fog. The only thing I was certain of was the fact that something bad had happened. Something that had stolen my memory and covered me in blood.

I wiped the rain from my face with a hand that was trembling, and looked left. The wall formed one side of a lane filled with shadows and overflowing rubbish bins. Down at the far end, a streetlight twinkled, a forlorn star in the surrounding darkness. There were no sounds to be heard beyond the rasp of my own breathing. No cars. No music. Not even a dog barking at an imaginary foe. Nothing that suggested life of any kind nearby.

Swallowing heavily, trying to ignore the bitter taste of confusion and fear, I looked to the right.

And saw the body.

A body covered in blood.

Mouth dry, stomach heaving, I climbed unsteadily to my feet and staggered over.

Saw what remained of his throat and face.

Bile rose thick and fast. I spun away, not wanting to lose my dinner over the man I’d just killed. Not that he’d care anymore…

When there was nothing but dry heaves left, I wiped a hand across my mouth, then took a deep breath and turned to face what I’d done.

He was a big man, at least six four, with dark skin and darker hair. His eyes were brown, and if the expression frozen on what was left of his face was anything to go by, I’d caught him by surprise. He was also fully clothed, which meant I hadn’t been in a blood lust when I’d ripped out his throat. That in itself provided no comfort, especially considering
I
was naked, and obviously
had
made love to someone sometime in the last hour.

My gaze went back to his face and my stomach rose threateningly again. Swallowing heavily, I forced my eyes away from that mangled mess and studied the rest of him. He wore what looked like brown coveralls, with shiny gold buttons and the letters D.S.E. printed on the left breast pocket. There was a taser clipped to the belt at his waist and a two-way attached to his lapel. What looked like a dart gun lay inches from his reaching right hand. His fingers had suckers, more gecko-like than human.

A chill ran across my skin. I’d seen hands like that before—just over two months ago, in a Melbourne casino car park, when I’d been attacked by a vampire and a tall, blue thing that had smelled like death.

The need to get out of this road hit like a punch to the stomach, leaving me winded and trembling. But I couldn’t run, not yet. Not until I knew everything this man might be able to tell me. There were too many gaps in my memory that needed to be filled.

Not the least of which was why I’d ripped out his throat.

After taking another deep breath that did little to calm my churning stomach, I knelt next to my victim. The cobblestones were cold and hard against my shins, but the chill that crept across my flesh had nothing to do with the icy night. The urge to run was increasing, but if my senses had any idea what I should be running from, they weren’t telling me. One thing was certain—this dead man was no longer a threat. Not unless he’d performed the ritual to become a vampire, anyway, and even then, it could be days before he actually turned.

I bit my lip and cautiously patted him down. There was nothing else on him. No wallet, no ID, not even the usual assortment of fluff that seemed to accumulate and thrive in pockets. His boots were leather—nondescript brown things that had no name brand. His socks provided the only surprise—they were pink. Fluorescent pink.

I blinked. My twin brother would love them, but I couldn’t imagine anyone else doing so. And they seemed an odd choice for a man who was so colorless in every other way.

Something scraped the cobblestones behind me. I froze, listening. Sweat skittered across my skin and my heart raced nine to the dozen—a beat that seemed to echo through the stillness. After a few minutes, it came again—a soft click I’d never have noticed if the night wasn’t so quiet.

I reached for the dart gun, then turned and studied the night-encased alley. The surrounding buildings seemed to disappear into that black well, and I could sense nothing or no one approaching.

Yet something was there, I was sure of it.

I blinked, switching to the infrared of my vampire vision. The entire lane leapt into focus—tall walls, wooden fences, and overflowing bins. Right down the far end, a hunched shape that wasn’t quite human, not quite dog.

They were hunting me.

Why I was so certain of this I couldn’t say, but I wasn’t about to waste time examining it. I rose, and slowly backed away from the body.

The creature raised its nose, sniffing the night air. Then it howled—a high, almost keening sound that was as grating as nails down a blackboard.

The thing down the far end was joined by another, and together they began to walk toward me.

I risked a quick glance over my shoulder. The street and the light weren’t that far away, but I had a feeling the two creatures weren’t going to be scared away by the presence of either.

The click of their nails against the cobblestones was sharper, a tattoo of sound that spoke of patience and controlled violence. They were taking one step for every three of mine, and yet they seemed to be going far faster.

I pressed a finger around the trigger of the dart gun, and wished I’d grabbed the taser as well.

The creatures stopped at the body, sniffing briefly before stepping over it and continuing on. This close, their shaggy, powerful forms looked more like misshapen bears than wolves or dogs, and they must have stood at least four feet at the shoulder. Their eyes were red—a luminous, scary red.

They snarled softly, revealing long, yellow teeth. The urge to run was so strong every muscle trembled. I bit my lip, fighting instinct as I raised the dart gun and pressed the trigger twice. The darts hit the creatures square in the chest, but only seemed to infuriate them. Their soft snarls became a rumble of fury as they launched into the air. I turned and ran, heading left at the end of the alley simply because it was downhill.

The road’s surface was slick with moisture, the streetlights few and far between. Had it been humans chasing me, I could have used the cloak of night to disappear from sight. But the scenting actions these creatures made when they first appeared suggested the vampire ability to fade into shadow wouldn’t help me here.

Nor would shifting into wolf form, because my only real weapon in my alternate shape was teeth. Not a good option when there was more than one foe.

I raced down the middle of the wet street, passing silent shops and terraced houses. No one seemed to be home in any of them, and none of them looked familiar. In fact, all the buildings looked rather strange, almost as if they were one-dimensional.

The air behind me stirred and the sense of evil sharpened. I swore softly and dropped to the ground. A dark shape leapt over me, its sharp howl becoming a sound of frustration. I sighted the dart and fired again, then rolled onto my back, kicking with all my might at the second creature. The blow caught it in the jaw and deflected its leap. It crashed to the left of me, shaking its head, a low rumble coming from deep within its chest.

I scrambled to my feet, and fired the last of the darts at it. Movement caught my eye. The first creature had climbed to its feet and was scrambling toward me.

I threw the empty gun at its face, then jumped out of its way. It slid past, claws scrabbling against the wet road as it tried to stop. I grabbed a fistful of shaggy brown hair and swung onto its back, wrapping an arm around its throat and squeezing tight. I had the power of wolf
and
vampire behind me, which meant I was more than capable of crushing the larynx of any normal creature in an instant. Trouble was, this creature
wasn’t
normal.

It roared—a harsh, strangled sound—then began to buck and twist violently. I wrapped my legs around its body, hanging on tight as I continued my attempts to strangle it.

The other creature came out of nowhere and hit me side-on, knocking me off its companion. I hit the road with enough force to see stars, but the scrape of approaching claws got me moving. I rolled upright, and scrambled away on all fours.

Claws raked my side, drawing blood. I twisted, grabbed the creature’s paw, and pulled it forward hard. The creature sailed past and landed with a crash on its back, hard up against a shop wall. A wall that shook under the impact.

Highlander's Redemption: The Sinclair Brothers Trilogy, Book Two by Emma Prince
Batman by Alex Irvine
BLACK Is Back by Russell Blake
Darkest before Dawn (The Kingdom of Mercia Book 2) by Jayne Castel
Splintered Icon by Bill Napier
Flora's Fury: How a Girl of Spirit and a Red Dog Confound Their Friends, Astound Their Enemies, and Learn the Impo by Ysabeau S. Wilce
Ondine by Ebony McKenna
Sunshine by Wenner, Natalie
Wild Robert by Diana Wynne Jones
A Ghost of Justice by Jon Blackwood
Our partner