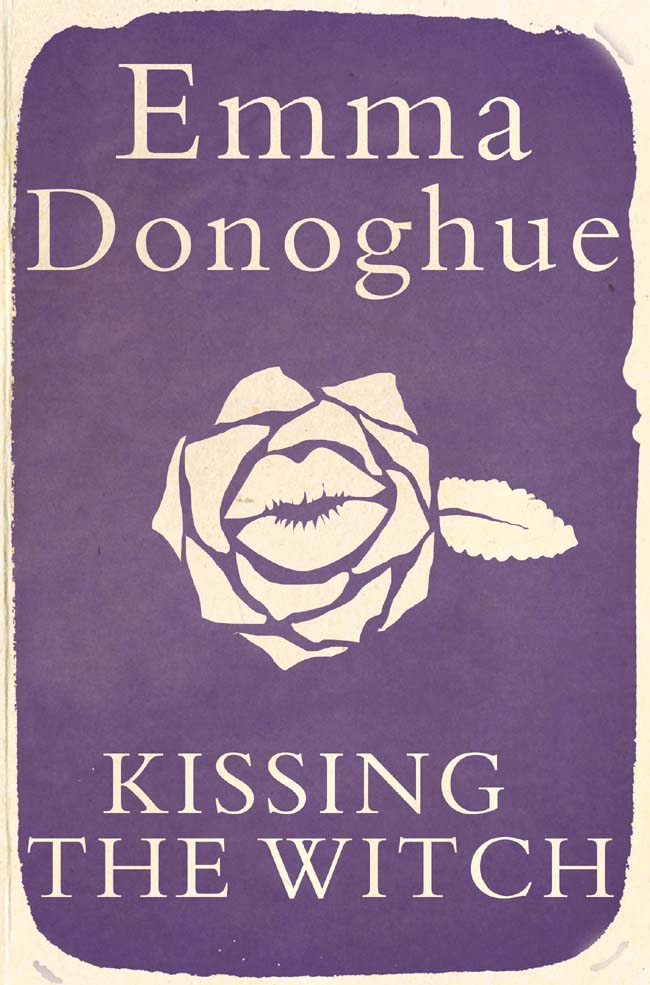 To Frances,
my mother and first storyteller,
who read me Andrew Lang’s ‘Pinkel and the Witch’
more times than she can bear to remember,
this book is dedicated
with gratitude and love.

I The Tale of the Shoe

II The Tale of the Bird

III The Tale of the Rose

IV The Tale of the Apple

V The Tale of the Handkerchief

VI The Tale of the Hair

VII The Tale of the Brother

VIII The Tale of the Spinster

IX The Tale of the Cottage

X The Tale of the Skin

XI The Tale of the Needle

XII The Tale of the Voice

XIII The Tale of the Kiss

I
The Tale of the Shoe

T
ILL SHE CAME
it was all cold.

Ever since my mother died the feather bed felt hard as a stone floor. Every word that came out of my mouth limped away like a toad. Whatever I put on my back now turned to sackcloth and chafed my skin. I heard a knocking in my skull, and
kept running to the door, but there was never anyone there. The days passed like dust brushed from my fingers.

I scrubbed and swept because there was nothing else to do. I raked out the hearth with my fingernails, and scoured the floor until my knees bled. I counted grains of rice and divided brown beans
from black.

Nobody made me do the things I did, nobody scolded me, nobody punished me but me. The shrill voices were all inside. Do this, do that, you lazy heap of dirt. They knew every question and answer,
the voices in my head. Some days they asked why I was still alive. I listened out for my mother but I couldn’t hear her among their clamour.

When everything that could possibly be done was done for the day, the voices faded. I knelt on the hearth and looked into the scarlet cinders until my eyes swam. I was trying to picture a
future, I suppose. Some nights I told myself stories to make myself weep, then stroked my own hair till I slept.

Once, out of all the times when I ran to the door and there was nobody there, there was still nobody there, but the stranger was behind me. I thought for a moment she must have come out of the
fire. Her eyes had flames in their centres, and her eyebrows were silvered with ash.

The stranger said my back must be tired, and the sweeping could wait. She took me into the garden and showed me a hazel tree I had never seen before. I began to ask questions, but she put her
tiny finger over my mouth so we could hear a dove murmuring on the highest branch.

It turned out that she had known my mother, when my mother was alive. She said that was my mother’s tree.

How can I begin to describe the transformations? My old dusty self was spun new. This woman sheathed my limbs in blue velvet. I was dancing on points of clear glass.

And then, because I asked, she took me to the ball. Isn’t that what girls are meant to ask for?

Her carriage brought me as far as the palace steps. I knew just how I was meant to behave. I smiled ever so prettily when the great doors swung wide to announce me. I refused a canapé and
kept my belly pulled in. Under the thousand crystal candelabras I danced with ten elderly gentlemen who had nothing to say but did not let that stop them. I answered only, Indeed and Oh yes and Do
you think so?

At ten to twelve I came down the steps and she swept me away. Had enough? she asked, lifting a hair off my long glove.

But she was old enough to be my mother, and I was a girl with my fortune to make. The voices were beginning to jabber. They each told me to do something different. Take me back tomorrow night, I
said.

So she appeared again just when the soup was boiling over, and took a silver spoon from her pocket to feed me. Our fingers drew pictures in the ashes on the hearth, vague shapes of birds and
islands. She showed me the sparkle in my eyes, how wide my skirt could spread, how to waltz without getting dizzy. I was lithe in green satin now; my own mother would not have recognized me.

That night at the ball I got right into the swing of things. I tittered at the old king’s jokes; I accepted a single chicken wing and nibbled it daintily. I danced three times with the
prince, whose hand wavered in the small of my back. He asked me my favourite colour, but I couldn’t think of any. He asked me my name, and for a moment I couldn’t remember it.

At five to midnight when my feet were starting to ache I waited on the bottom step and she came for me. On the way home I leaned my head on her narrow shoulder and she put one hand over my ear.
Had enough? she asked.

But I didn’t have to listen to the barking voices to know how the story went: my future was about to happen. Take me back tomorrow night, I said.

So she came for me again just when the small sounds of the mice were getting on my nerves, and she told me they were coachmen to drive us in state. She claimed her little finger was a magic
wand, it could do spectacular things. She could always make me laugh.

That night my new skin was red silk, shivering in the breeze. The prince hovered at my elbow like an autumn leaf ready to fall. The musicians played the same tune over and over. I danced like a
clockwork ballerina and smiled till my face twisted. I swallowed a little of everything I was offered, then leaned over the balcony and threw it all up again.

I had barely time to wipe my mouth before the prince came to propose.

Out on the steps he led me, under the half-full moon, all very fairy-tale. His long moustaches were beginning to tremble; he seemed like an actor on a creaking stage. As soon as the words began
to leak out of his mouth, they formed a cloud in which I could see the future.

I could hardly hear him. The voices were shrieking yes yes yes say yes before you lose your chance you bag of nothingness.

I opened my teeth but no sound came out. There was no harm in this man: what he proposed was white and soft, comfortable as fog. There was nothing to be afraid of. But just then the midnight
bell began to toll out the long procession of years, palatial day by moonless night. And I leaped backwards down the steps, leaving one shoe behind.

The bushes tore my dress into the old rags. It was perfectly silent on the lawn. She was waiting for me in the shadows. She didn’t ask had I had enough.

I had got the story all wrong. How could I not have noticed she was beautiful? I must have dropped all my words in the bushes. I reached out.

I could hear surprise on her breath. What about the shoe? she asked.

It was digging into my heel, I told her.

What about the prince? she asked.

He’ll find someone to fit, if he looks long enough.

What about me? she asked very low. I’m old enough to be your mother.

Her finger was spelling on the back of my neck.

You’re not my mother, I said. I’m old enough to know that.

I threw the other shoe into the brambles, where it hung, glinting.

So then she took me home, or I took her home, or we were both somehow taken to the closest thing.

In the morning I asked,

before you walked into my kitchen?

And she said, Will I tell you my own story?

II
The Tale of the Bird

W
HEN I WAS
as young as you are now I learned how to save my own life. You think I have saved you, but the truth is that your need has conjured me here.
It was a bird that helped me, when I was young, but it could have been anything: a stick, a stone, whatever happened by. The thing is to take your own life in your hands.

As a child I weighed mine and did not think it worth saving. Scrubbing the great steps one day, I found an old bent copper knife. In its corroded curve, my reflection was barely a thumbnail
high. Now I knew for sure that I was the least thing in the world. The dogs and cats mattered more than I did. They had their places on the earth; they merited their grooming, their feeding, or
their drowning; no one questioned their existence. Whereas I was not a necessary animal.

There was a man I had been taught to call father. He saw to the horses in the great stables, their bright mouths and metal chorus; his eyes never fell to my level. There was a woman who called
herself my mother. She wore an apron like a snow cloud; her hands blushed red as if ashamed. I could not imagine that I had emerged from her substantial flesh; it seemed more likely that she had
found me caught in a cowpat, or behind the apple barrel, or while cleaning out a mousetrap. Once, eavesdropping in the laundry, I heard her tell a neighbour that she had spent twenty years pining
for a child. I could hardly have been what she had in mind.

You must understand, I was not ill-treated; no one wasted breath flinging insults at my head. I did not belong, that was all. Nor did anything belong to me; mine was a borrowed life. Considering
myself as the louse in their bed, the cuckoo in their nest, I felt a certain reluctant gratitude for the food and shelter they allowed me. I wore scraps of everyone’s worn-out clothing: my
shoes were made of the gardener’s gloves, my shift from old handkerchiefs. My names were hand-me-downs too:
girl
,
the creature
, or, most often,
you there
.

Every story I ever heard of changelings, babies swapped at birth or abandoned in bulrushes, I repeated to myself at night to glean their secret message. But I had no idea how I had drifted into
the path of these indifferent giants called father and mother, and I did not dare to ask.

Only in the fields did I find a sense of proportion. I knew we were all equally minute under the liquid eye of the sky, and equally precious in its sight. I used to sit so still that even the
rabbits would not notice me. Seagulls wheeled overhead, gulping out their hunger. Swallows made letters against the sky, too brief to read. Once I spent a whole day there, a blade of grass in each
hand to anchor me to the warm earth. I watched the sun rise, pass over my head and set. Ladybirds mated on my knuckle; a shrew nibbled a hole in my stocking while I tried not to laugh. Such a day
was worth any punishment.

The Man With Candy by Jack Olsen
The CEO Daddy Next Door by Karen Booth
Roustabout (The Traveling #3) by Jane Harvey-Berrick
DARKSIDE OF THE MOON by Jodi Vaughn
Bertie and the Hairdresser Who Ruled the World by Mike A Vickers
The Elite: The Complete Series of Boomer and Player (With Bonus) by KB Winters
Everything Changes by R F Greenwood
69 Things to Do With a Dead Princess by Stewart Home
Abduction by Wanda Dyson
A Dream of Lights by Kerry Drewery
Our partner