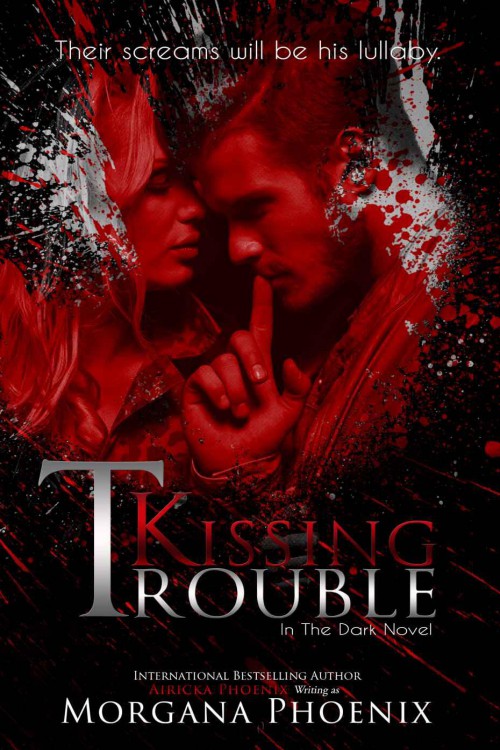 An In the Dark Novel

This book or parts thereof may not be reproduced in any form, stored in or introduced into a retrieval system, or transmitted, in any form, or by any means (electronic, mechanical,

photocopying, recording, or otherwise) without prior written permission of the copyright owner and/or the publisher of this book, except as provided by United States of America copyright law.

This book is a work of fiction. Names, characters, places, and incidents are a product of the author’s imagination or are used fictitiously. Any resemblance to actual events, locales, or persons, living or dead, is coincidental. Your insomnia awaits your submission.

IN THE DARK SERIES

My Soul For You

To all who came before me.

Thank you for paving the way.

P
eople always assume that writing is a solitary activity. They imagine a stooped, grungy, dirty, possibly smelly creature huddled in a corner with weeks old B.O. and a nervous twitch. They imagine a room that stinks of stale coffee, last week’s burnt chili, and an assortment of discarded clothing. While most would be right, writing isn’t a solitary business. It takes a village to raise a child and a village to piece together every book.

My village is small, consisting of a chosen few who have stood by me through every outburst, every bout of hysterics and the occasional reminder that showers are my friend, especially during edits when editing becomes my very reason for living. They keep me grounded, mostly attempt to keep me sane and every so often, are the reason I don’t set my computer ablaze.

Kathy, thank you for insisting that my mad ideas aren’t really entirely mad. Thank you for not hunting me down and beaning me over the head. Also, and this is one I really appreciate, thank you for making my work sparkly. I bow to your awesomeness.

Amber, there are no loincloths in this story and for that I am sorry. I will work harder next time to not disappoint. Thank you for not chalking me up as a hopeless case.

Kimmie, I expect many great things from you and I look forward to being the one to say I told you so when it happens. I’ll never give up on you so you’re not allowed to give up on yourself.

The Dark Court, another book, ladies. Another year almost completed and another year where I get the honor of calling you family. Thank you for always sticking by me.

The authors of Indie Scribe and May the List Be With You, you all awe me with your kindness. I have never met a group so dedicated on helping each other achieve greatness. I feel great just by knowing each of you. Thank you for every push.

My readers, it’s never easy understanding an author. We’re fickle, scatterbrained and so dedicated to the abnormal that it’s sometimes hard to get your head around it. Nevertheless, you stand by us, indulge us and give us reason to write that next paragraph. Thank you for unwavering love and support. As with all my books, enjoy and happy reading.

A
ll the coffee, chocolate, and sunshine in the world couldn’t stave off the migraine pressing against the nerve endings of Julie’s brain. It was taking all her patience, and then some, to repress the urge to commit murder, or worse pitch herself headlong into oncoming traffic. The latter was becoming a definite possibility with every passing second she had to sit and listen to the World War III taking place in the backseat.

“Will you two shut up? I’m trying to forget I’m in this nightmare!”

“Julie, Dustin called me an idiot!”

“Okay, okay!” Julie put one hand up, silencing the bickering without taking her eyes off the road. “Look, we have two more hours of driving ahead of us. I really need you guys to work with me, okay?” The last part came out sounding a little unhinged.

“Can we open the window?” Rick whined. “Wendy has athletes foot again and I’m going to
die
.”

“I do not!” Wendy wailed, her voice fraught with tears.

“No they don’t!” Wendy was crying now.

On Wendy’s other side, Dustin barked out laughing. “Ha! Old man fart.”

“Yes!” Julie shouted over the sound. “I will open the window, but no more fighting.”

She knew she was asking for miracles, but she was hoping some of her karma points would kick in, and stay for at least a good portion of the trip. After all, wasn’t she sacrificing her summer to help a neighbor in need? That had to count for something.

The squabbling didn’t stop. It didn’t even slow down. Julie tried to put the radio on and that worked for about an hour before they hit the boonies and all stations, but AM, faded to static. Games were out as well since all three of the Vance children were
too old
for them. She tried asking them questions, in hopes of distracting them from each other, but every time one answered the other two would pipe in with some taunt that would start a whole new series of rants.

By the time they made the turn off Highway 1 and plunged headlong towards the slumbering town of Salmon Cove, Julie was ready to pull over and dump all three kids on the side of the road.

Get a grip, Brewer,
the voice in her head scolded.
This is no different from all the other times.

Not necessarily true, she wanted to tell her inner voice. While it was true that she had been babysitting the trio every weekend and most weeks since she was fifteen, it was something uniquely horrifying to spend an entire month alone with them. Suddenly the ten grand Maureen Vance had given her in exchange didn’t feel like enough.

It wasn’t that she didn’t love the children. They were each wonderful in their own ways, but it was when they were together that made Julie want to bring out the holy water and start dousing them. Unfortunately, holy water was the one item she hadn’t thought to pack.

Not like you had a choice,
the voice reminded her. It truly didn’t seem to matter how Julie looked at it, ten thousand dollars for one month’s work to sit around and watch three small children hadn’t seemed like such a bad fate. She could read by the lake, get a tan, and unwind from the grueling exams she had just finished. The fact that all that pretty coin came tax free and paid for her rent, her next year’s set of books, and a pretty new laptop was just an added bonus.

Nevertheless, she should have asked for more. It wasn’t like Maureen couldn’t afford it. She practically threw the money at Julie with the promise of more if she needed it.

Somewhere, turned out to be the middle of nowhere, camping. Julie, whose idea of nature was sitting on the balcony of her tiny apartment and watching the wind blow through the flowerboxes she had planted earlier that spring, wasn’t sure what to expect. Maureen had promised her that the cabin had everything they needed and all Julie had to do was watch the kids.
That
Julie could manage.

“Only thirty-days.” Her grumble was swallowed by a shriek from Wendy that was practically a physical force spiking through Julie’s eardrums.

“What?” Restraining herself from whirling around in her seat, Julie tightened her grip on the wheel and settled on casting panicked glances into the rearview mirror.

Wendy punched him in the chest. “I didn’t!”

“Wendy hit me!” Rick screamed, then followed it by punching Wendy back.

No one was listening to her. Dustin moved just long enough to turn up the music on his iPod. His brooding stare remained fixated on the rushing scenery outside the window.

Seeing that she was alone and outnumbered, Julie gritted her teeth and put a little more pressure on the gas pedal. Not too much, but just enough to make the needle jump from the hundred mark to hundred and five. While it wasn’t exactly speeding, especially when the speed limit was a hundred-twenty, she quickly caught herself and went back to her careful driving. The last thing she wanted to do was hit Bambi or another car because the three in the back were driving her insane.

When the oval sign welcoming them to the
Salmon Cove, home of the big one,
rolled into view, Julie nearly burst into tears. She would have, if her eyes hadn’t already been watering due to the excruciating pain thrumming at her temples.

She concentrated on the steep slope, propelling them downward into the tiny village cradled in the bowl shaped valley. Trees and mountains stood in a protective circle along the outer edges, shielding the town from intruders. Julie sucked in a gulping breath of pine scented air and willed herself to relax. There was still another forty-five minutes before she was free to leave the car.

“We’re almost there!” she sang out as the descent brought them through the winding road cutting between rows of neatly placed and brightly colored shops. “Why don’t you guys let me know when we get closer?”

She knew where the cabin was ... roughly, but maybe the task would keep them quiet for the next half hour.

The Vance’s summer cottage was tucked away in a secluded patch of wilderness at the foot of a majestic mountain capped with snow. Julie had never been there before, but the two story structure was nothing like she ever imagined a cottage would look like. Granted, it was made of logs, but the rustic feel ended there.

It was sprawling with a wraparound terrace around the second floor and enormous windows that glinted beneath the late sun. The front drive was almost a mile away from the main road and completely canopied by a tangle of trees. Paved highway ended in gravel, leading to smooth white cement that haloed an empty fountain and was hugged by miles of neatly manicured lawn. It was the sort of place she envisioned strung out celebrities would be sent to detox. It was certainly not what she pictured when Maureen told her it was a simple, rustic place.