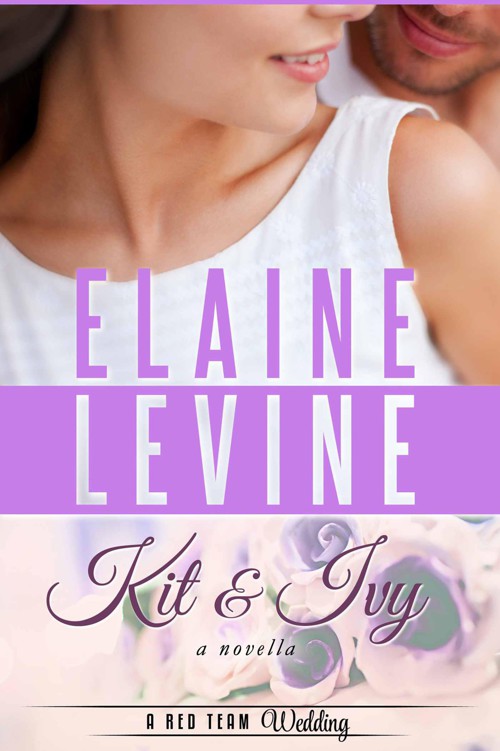 A
Red Team Wedding Novella
by

© 2014 by Elaine Levine. All rights reserved

Ex-spec ops solider Kit Bolanger tried hard to forget Ivy Banks, the only woman he ever loved. When his work brought him back to his hometown, and he learned she was still single, he pursued her with a relentless focus. Now, in just a few weeks, they’re set to lock things down permanently on their big day.

With the wedding looming, Ivy’s working tirelessly to create the perfect menu and orchestrate their dream wedding. However, Kit has one last secret to reveal—and it might just be a deal breaker. Will Ivy see the truth behind Kit’s actions? Or will she call the whole thing off, this time for good?

A Note from the Author:

We begin
Kit and Ivy: A Red Team Wedding Novella
at the point where
Honor Unraveled
finished. For enhanced enjoyment of this short story, be sure to read
The Edge of Courage
,
Shattered Valor
, and
Honor Unraveled
before starting this book!

Adam Banks stepped onto the front stoop before the man coming up his driveway could knock. From his office, he’d watched him get out of his unmarked black sedan and come toward the house. The man wore a nondescript charcoal suit—official government issue.

Adam had been expecting a visit like this every day for thirteen years, but it was surreal to have it actually happen.

He wondered what news the man brought. Had his daughter committed a crime? Was she dead, a Jane Doe in a remote morgue, unclaimed, unwanted? What of his granddaughter? A niggling voice chastised him for even pretending to care. If he’d been a real father and grandfather, his daughter and granddaughter wouldn’t be out in the world, alone.

“I’m looking for Adam Banks,” the man in the suit announced as he came up the front steps.

“Are you Adam Banks?”

The man pulled an ivory envelope from an inside pocket and handed it to him. Adam closed the door behind him. He didn’t want to trouble his wife with whatever news the man brought to their doorstep. He opened the unsealed envelope and withdrew the card inside.

“Ms. Ivy Banks and Mr. Kit Bolanger request the honor of your presence at their wedding…”
The words jumped and blurred in front of him. He had to read the invitation twice.

“I’m required to wait for your answer,” the suit told him.

“Kit didn’t have the balls to come himself?”

“Is that your answer?”

“The invitation is for both you and your wife.”

“Very good, sir.” The suit handed him another envelope. “Here is your itinerary and the number where you can reach Kit. A car like mine will pick you up two hours prior to your flight. You will be flown out and back on a private jet. A car will take you from the Cheyenne airport to the address in Wyoming where you’ll be staying. You will arrive Thursday before the wedding and will depart Sunday. Do you have any questions?”

None the suit could answer. “No.”

Adam closed the front door and walked back into the kitchen, where his wife was preparing their supper. “Who was that?” she asked as she stirred a pot on the stove.

Adam shook his head and picked up the day’s stack of mail. “Some sales guy.”

“This is a non-soliciting neighborhood. You’d think they wouldn’t go door to door here.”

He didn’t respond. “How long before dinner?”

“I have to make a call. I’ll be right back.” He went down the hall to his office and shut the door. He took the invitation and itinerary out of his pocket and spread them across the desk. Anger expanded and twisted in his veins. He dialed Kit’s number. It rang once.

Adam didn’t answer. Part of him had been hoping his past hadn’t just slammed into his present.

“Mr. Banks. You received the invitation, then.”

“What the hell kind of game are you pulling now, kid?”

“It’s a wedding, Mr. Banks, not a game. I’m marrying your daughter. Will you be attending?”

“Your messenger didn’t give you my answer?”

“He did. Thought perhaps you’d called to back out.”

“This is cruel. Mrs. Banks has a weak heart. I can’t bring her someplace where she’ll be mistreated or stressed.”

“I have no control over how she’ll react to the weekend. I do know, for our part, you’ll both be treated as honored guests. It’s time to put the past behind us and move forward as a family.”

“Ivy’s agreeable to our visit?” There was momentary silence on the other end. “You haven’t told her,” Adam scoffed.

“No point worrying her if you weren’t coming. I’ll clear the way with her. However, I’m gonna say this only once: this is her special week, her special day. If you make her cry, if you insult or threaten her or hurt her feelings, I’ll have your asses on a plane so fast, you won’t know what hit you.”

“What about the baby?”

“Casey’s twelve now. She’s as strong as her mother and very, very precious to both of us. My protection extends to her as well, feel me? You got an issue with me, you take it out with me. No matter what, you treat my girls like gold.”

“Agreed. And likewise with Mrs. Banks.”

“Agreed. See you in a couple of weeks.”
The line went dead.

Adam opened his office door, then started toward the kitchen, hoping by the time he got to the other side of the house he’d know what to tell his wife.

The locker room was steamy. And crowded. The entire Red Team, sans Max, were drying off and gearing up. Owen looked across the room and asked Kit, “You set a date yet for the big day?”

“Where are you getting married?” Kelan asked, toweling his hair.

“Here. Don’t need the distraction of an offsite shindig. Besides, I want you guys there.”

Kelan moved the towel aside and shook his head. “Don’t do it here. Seriously, that’s a bad choice.”

“Because we killed about a dozen bastards last month. And with all the weird shit Blade went through growing up, there’s bad mojo here.”

“No, he’s right.” Blade looked at Kit. “There’s something off with this house. Thought I was the only one who felt it.”

Kit made a face. “I’m not delaying the wedding. You kidding? I only just got Ivy to agree to marry me. And we’re not holding it somewhere else. The logistics are bad enough having it here.”

“Let me bring a shaman in to clear and heal the space.” Kelan looked between Kit and Owen.

“No,” Owen nixed that idea. “No civilians. Or do the clearing, but keep it upstairs.”

Kelan shook his head. “Won’t work. Every inch of useable space has to be cleared, including the bunker, the basement, both main floors, all entrances and windows, stairs and elevator, and the grounds. What’s here has to get pushed out and walled out.”

Owen glared disbelievingly at him for an uncomfortably long moment. “No.”

“Let him do it,” Blade argued. “He’s right. I got rid of the cage, but there are still shadows here. Have been for a while. I want them gone. And I want Kit’s marriage to start on safe ground. He deserves it. Besides, it’s not like this bunker is a secret. Our enemies spent a dozen years exploiting it before we took control of it.”

Owen exchanged a glare with Kit, then capitulated. “Fine.” He pointed at Kelan. “Your voodoo priests are never to be left alone anywhere in the building or on the grounds. And after their cleansing, we do a full security sweep.” He shook his head. “And if shit goes down when they’re here, they get the hell out of the way and let us do our business.”

“Can you make it happen before the wedding, K?” Kit asked.

Kelan nodded. “I’ll make some calls and get it started.”

“Let me know what it costs. I’ll cover it,” Kit told him.

Kit held his hand out to Kelan. “Ivy and I thank you.”

Lockers slammed and the room grew quieter as the guys began leaving.

“You hear from Ivy’s parents?” Blade asked as he and Kit walked to the main house.

Kit sucked in a deep breath. “No. I wanted to be sure before I said anything. I was worried they’d still back out.”

“You’re a fucking idiot.” Blade looked at Kit. “You do want Ivy to be at the wedding, right? ’Cause that ain’t news she should be surprised with, like, the weekend of.”

“I’ll tell her. I just have to figure out how.”

A light was still on in the kitchen. Kit looked at his watch. One a.m. Ivy had said two hours ago that she was coming to bed shortly. Obviously, she never made it. He stepped quietly into the kitchen, leaning against the doorjamb as he watched her work.

Bowls, mixers, blenders, piping tubes, and other tools were scattered across the counter, along with various sweet and savory ingredients. The kitchen smelled divine, like a French patisserie and delicatessen combined.

Ivy was frowning down at something she was preparing. Her dark hair was pinned up, but after the long hours spent in the kitchen, several tendrils had escaped and now lingered by her face in ways that irritated her and heated him. Kit smiled, feasting on the sight of her. He shifted his weight, crossing his bare feet as he leaned against the entranceway.

She looked up, then registered what his presence meant. “Oh.” She glanced at the clock, seeing that several hours had passed since she said good night. “Oh!” She sent a panicked look across the counter. “Kit, I’m sorry—”

He crossed the room to stand behind her and massage her tight shoulders. “Don’t apologize.”

“I wanted to test out some treats for the wedding. I don’t want to be in Kathy’s way in here during the day, so I have to do it after her shift ends.” She moaned as he worked her stiff muscles. “That’s heaven.”

“Why don’t you use Mandy’s kitchen?”

Ivy gave him a dark look. “I can’t cook there. She doesn’t have half the tools I need and it’s too small.”

He drew her back to lean against him and wrapped his arms around her. “What can I do to help?”

“Try this.” She cut into a roast baked in a weave of bacon strips.

“Pork loin stuffed with apples, mushrooms, kale, and my secret sauce. Like it?” She fed him a bite from a little fried ball of something. “And potato fritters.” He took up a fork and had another bite. “Like it?”

“That’s option A. This is option B.” She cut into a small, layered tower of something topped with petite lettuce leaves.

“Because not everyone likes pork. Or eats meat. I thought I’d serve a fish and a vegetarian something.”

Kit laughed. “Honey, you’ve seen the guys eat. They don’t even chew their food, just wolf it down. They’ll eat whatever. Don’t kill yourself over this.” She gave him a wounded look, which made him wish he’d said just about anything else.

“I want this to be special. I want our friends to remember how elegant the day was. I want it to be an
event
.”

“Okay.” He took the taste she was offering him. “That’s good. What is it?”

“Never. This is a very nice dish. Besides, if the guys have to use eating utensils, it’ll absolutely slow them down long enough to enjoy your tireless culinary labors.” He grinned at her.