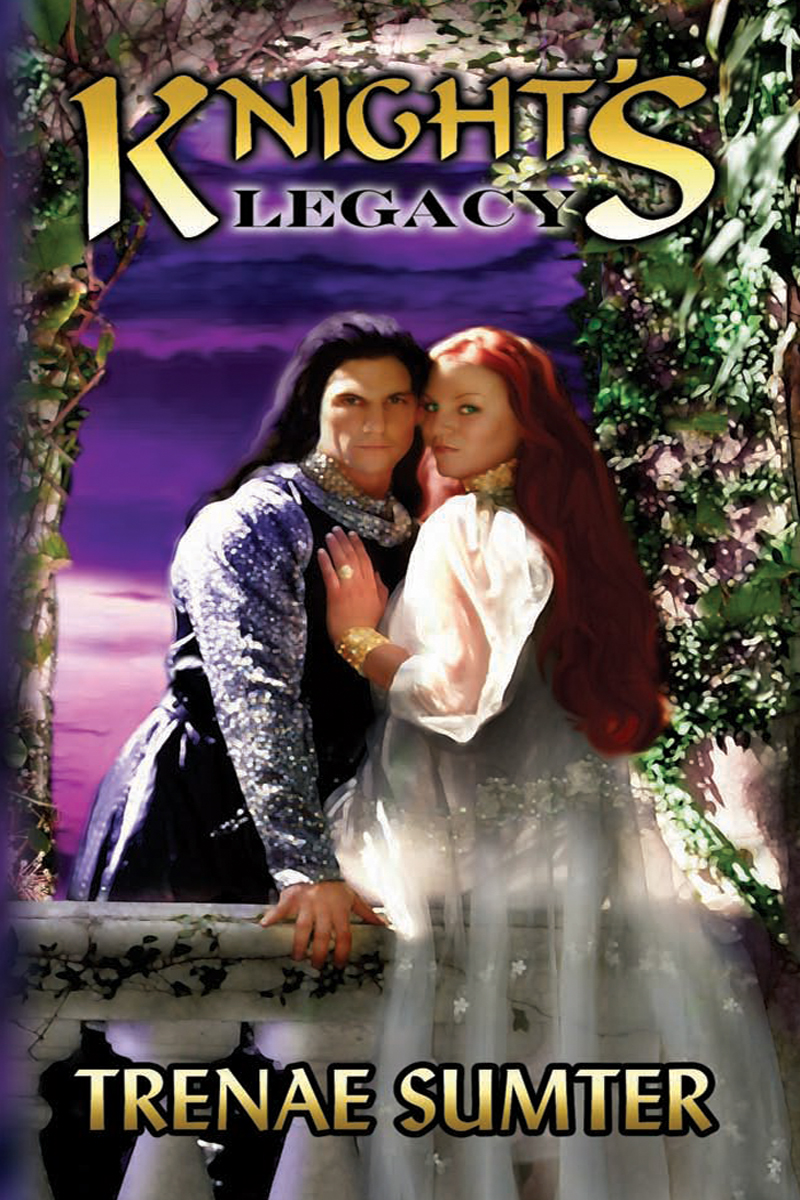 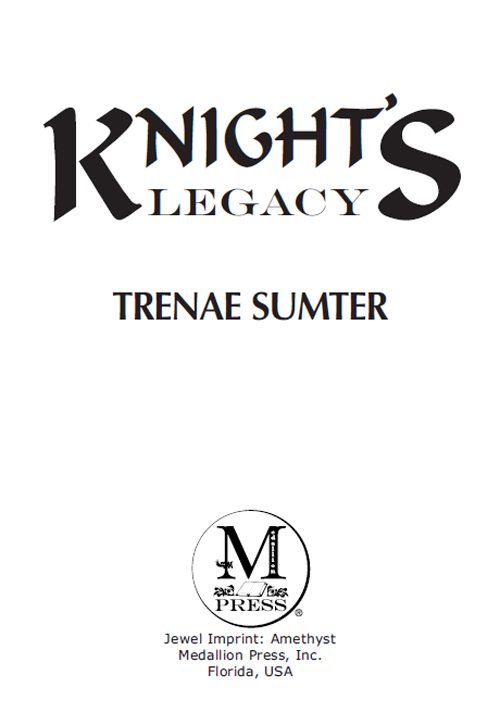 The MEDALLION PRESS LOGO
is a registered tradmark of Medallion Press, Inc.

To the Father of celestial lights for “every good gift and
every perfect present” for writing is a “good gift.”

To my dearest husband of twenty-nine years, Joe. It's still fun to have coffee with you every morning.

To Winona Sumter Cole who believed in me and my dreams before I did.

He that is slow to wrath is of great understanding, but he that is hasty of spirit exalteth folly.

T
he warrior knight wanted to kill a man. He looked forward to it. His righteous rage at what he had seen demanded retribution. The village had been laid waste. Women and children were ill and starving. His loyalty to his King was the only thing that stayed his hand.

Sir Roderic de Montwain had been sent to appraise the conditions of the small clan of Mackay in the Scottish Highlands. He was to bring back a report to the King. More and more his mind screamed at the injustice of it. The outlaw Scot responsible for this was going to be rewarded, and King Alexander tolerated this travesty for one reason only. A woman. He wanted an alliance, a marriage.

Roderic was to marry the daughter of this renegade who had literally sacrificed his child for his own freedom.

King Alexander would bargain with a demon to fulfill a promise made long ago to Elizabeth Mackay. As Roderic viewed the handiwork of Calum Mackay, he concluded that dealing with Lucifer would be preferable.

The outlaw Scotsman was a nuisance to the King. Alexander wanted him banished, or dead. Roderic would prefer dead. Yet, he held in his possession the very document that would free the man; a decree of clemency signed by the King. He was to present it to Mackay the very day his marriage took place.

Roderic had sworn his allegiance to the Scottish King, so he would marry. These lands would be his and these people of the clan, so skinned and tossed about, his responsibility, but he had no longing to marry, even at his age of eight and twenty.

The King wanted peace in this land and an agreeable marriage for Brianna Mackay, although his affection for the daughter of the outlaw was a puzzle to Roderic. King Alexander had not seen the girl since she was a child when her mother held a special place in the King's heart, and he had given her a promise to see her daughter wed properly, in spite of her father.

Roderic's loyalty was tested by the request. He had spoken freely of his feelings to the King.

“The daughter of such a man could indeed share her father's character, sire.”

“No. I disagree. She was a sweet-tempered child, like her mother. I must hope that this marriage will be the saving grace for all concerned, Roderic. I hate with a passion the very thought of the pardon. Mackay deserves to be hung a thousand times for his sins, but I must think of the clan, and the girl. You are needed there, and the marriage is necessary. The clan willnae accept you without it, for you are English. You must wed one of their own. Who better than the daughter of the Laird?”

So, it was done. Roderic stood ready to meet his bride.

Gavin MacLaurin approached, and Roderic turned to his friend. “Still no message?”

Gavin's handsome face glowered in rage. “None. Tell me the insult is enough to attack the scurvy dog and be done with it!” His tone was contemptuous, despite the soft burr of his speech.

“I struggle with my own self-control, Gavin. Do not tempt me to override it. The insult to me is of little consequence when we see the pain these people have suffered. Mackay feeds his band of thieves and leaves the women and children to survive alone!”

“Yet, he escapes again. I only hope your bride is worthy of such a mercy,” Gavin said.

“She must be fair indeed, if she favors her mother. The King has spoken of her beauty, has he not?”

Roderic smiled and inclined his head. “Gavin, trust you to turn our discussion of battle to that of a woman's beauty. You are entirely too enticed by the subject of wenching.”

Gavin chuckled. “I agree, 'Tis true. Yet, it is a subject on your mind, my friend. Why not speak of it? You stand ready to marry a woman you have never seen. How can you not be curious, or concerned with the prospect you may be enchained to a homely shrew, or a goddess?”

Roderic gave an impatient shrug. “I will be content should she prove to be somewhere between. It matters not. I will not expect the lass to swoon with pleasure at our first meeting.”

Gavin stared at his friend and silently disagreed. Roderic was a massive, self-confident presence. His profile was rugged and somber, and his strong features held a certain sensuality that never failed to attract the ladies. His hair was a shade between black and brown, silky straight, and fell past his shoulders. Gavin had witnessed many a lass strive to catch his friend's eye. He even used it to his own advantage by consoling their hurt feelings.

“This marriage is something I will endure, no more. It is for the land and the good of these people. My wife will not change my goals. It is her duty to obey her husband,” Roderic said.

Gavin smiled indulgently. “In my judgment, few women understand the concept of duty and honor. A wife will be no exception. Perhaps you can instruct her on the responsibilities of a capable wife, but dinnae be misled. A woman will allow many things, but being ignored is not one of them.”

“I have no intention of mistreating my wife in such a way, Gavin. I do not share your jaded opinion. Women are fascinating creatures. I love their scent, their softness, the way they move. I find them capable of honor and courage. If treated tenderly, with the right amount of firmness, they can, and do display loyalty.”

There was a sparkle in Gavin's green eyes as he raised a brow. “The same can be said of a good horse,” he drawled.

Roderic smiled, brown eyes warm with amusement. “I thought nothing could make me smile today. I understand they have killed some of their horses for food?”

“Aye, though I thank all that's holy they had them.”

The two men turned to the sound of voices suddenly raised in argument. A thin woman with pale, sallow skin and brown hair was trying to struggle past one of Roderic's men.

She pushed the man's grip from her forearm and faced Roderic, standing proudly, defiantly, her blue eyes snapping to his. She took a deep, unsteady breath and looked at him intently.

“Ye be Montwain?” Her voice was brittle. “I am,” Roderic said.

He was unprepared for the sight of the woman dropping to her knees before him. She took his hand and kissed it, her hot tears bathing his wrist, and he felt her body shudder with emotion.

“I be grateful to ye.” She looked up into his eyes. “My name is Mary. Ye have saved my bairn by giving us food. I'll not forget it. I will pledge my fealty to ye this day, do ye want it.”

Roderic's brown eyes were warm with compassion as he gently reached down to help her stand. “I do, milady.”

She inclined her head in a respectful nod. “Ye be a mon of honor. Ye have shown kindness to this clan, so I will beg of you to extend your mercy to another.”

“If you ask for Mackay â¦”

“Ach! May that devil die in hell,” she hissed. “The mon raped my sister when she was little more than a wee lass, and died birthin' the babe, Kenneth.” Her expression softened with the name. “He be a lad now of only four and ten summers, with bright red hair, but he is mute, never spoken a word. Mackay doesnae claim him as his own, but he willnae banish him from the keep. When you attack and breach the walls, I beg ye to spare him. Although fey, he wouldnae hurt another, for he is a gentle lad, and he dinnae rate a sword in his belly because his father is wicked.”

“It is my hope that it will not come to that, milady. I cannot speak to you of matters of war. Yet, no one here save the warriors of Mackay will be put to death. If I see the boy, I will look to his safety,” Roderic said.

“Bless ye, sir. I now at least have hope.” She turned to leave them, her steps proud and strong when she walked away.

Roderic muttered furiously to Gavin. “God, give me the strength not to kill him.”

Wanting to be alone with his anger, he turned on his heel and marched away from the camp, Gavin in step beside him.

“Do we charge now?” Gavin asked.

Roderic soon spoke to him over his shoulder. “Nay, we will not attack the keep at this time. We will give him two more days. Have all the children been fed and looked after?”

“Aye, we have fed them from our own stores. Some are ill. We have done our best to make them comfortable. None are beyond recovery,” Gavin said.

“ 'Tis a blessing,” he sighed. “I would dread the prospect of presenting the King with word of yet another death at Mackay's hand.”

Warlord of Mars Embattled by Edna Rice Burroughs
Cowgirl Up by Ali Spooner
Songs of the Dancing Gods by Jack L. Chalker
The Tanners by Robert Walser
Disclosure: A Novel by Michael Crichton
The Night Falconer by Andy Straka
Serpent's Tower by Karen Kincy
Beneath the Shadows by Sara Foster
Nothing But Fear by Knud Romer
The Wrong Path_Smashwords by du Paris, Vivian Marie Aubin
Our partner