Read Knights of the Black and White Online

Knights of the Black and White 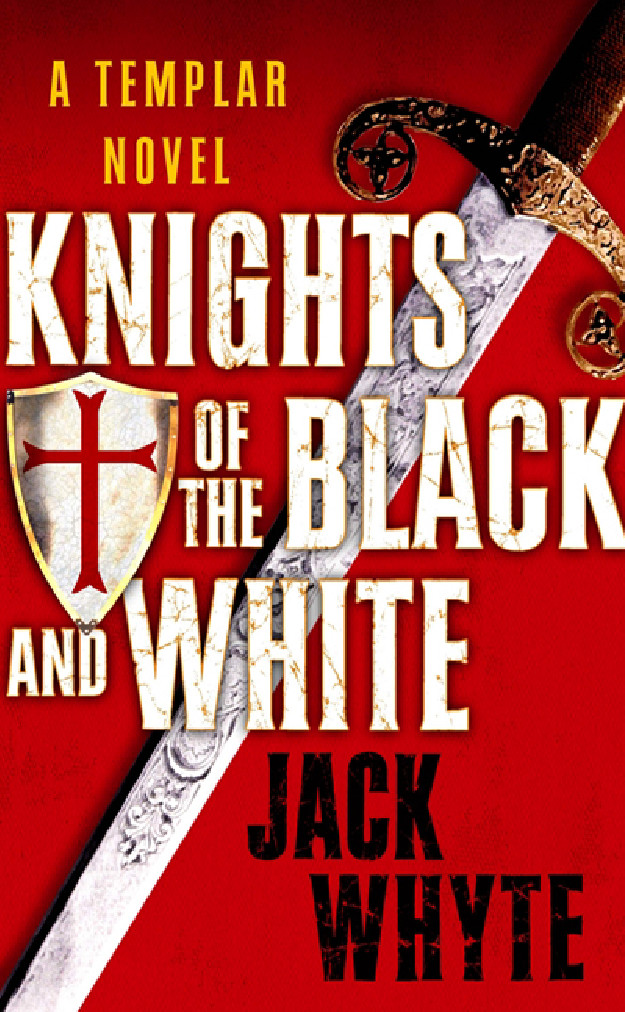 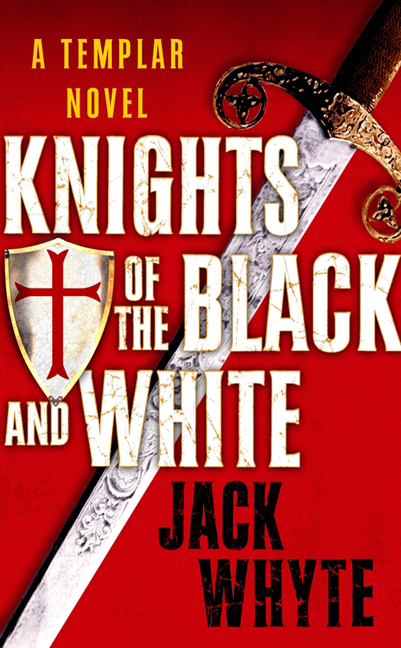 KNIGHTS OF THE BLACK AND WHITE

“Shine[s] light on one of the most mysterious and secretive aspects of medieval history: the Knights Templar . . . an exciting and entertaining story . . . Whyte’s writing is taut and gripping.”

“Readers . . . will be very excited to jump into this.

Whyte, a master at painting pictures on an epic-sized canvas, pulls the reader into the story with his usual deft combination of historical drama and old-fashioned adventure. One warning, though: when you put this one down, you may immediately begin salivating for volume two.”

“Fans . . . have a whole new realm of history to explore.

In [Whyte’s] new novel,
Knights of the Black and
White
, . . . [he] takes us to eleventh-century France and from there on the Crusade path to the Middle East.

The plot ingredients include secret societies, covert cloak-and-dagger operations, and the clash of swords.”

“A terrific theme . . . the Knights Templar crowd will enjoy [
Knights of the Black and White
].”

THE FORT AT RIVER’S BEND 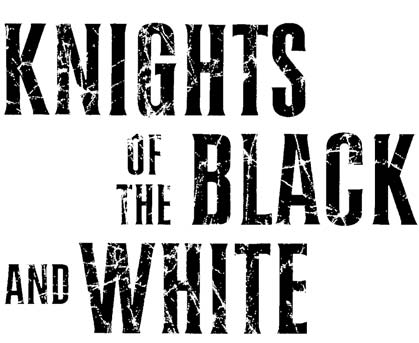 Penguin Books Ltd., Registered Offices: 80 Strand, London WC2R 0RL, England This is a work of fiction. Names, characters, places, and incidents either are the product of the author’s imagination or are used fictitiously, and any resemblance to actual persons, living or dead, business es -

tablishments, events, or locales is entirely coincidental. The publisher does not have any control over and does not assume any responsibility for author or third-party websites or their content.

KNIGHTS OF THE BLACK AND WHITE

A Jove Book / published by arrangement with the author Copyright © 2006 by Jack Whyte.

No part of this book may be reproduced, scanned, or distributed in any printed or electronic form with -

out permission. Please do not participate in or encourage piracy of copyrighted materials in violation of the author’s rights. Purchase only authorized editions.

JOVE is a registered trademark of Penguin Group (USA) Inc.

The “J” design is a trademark belonging to Penguin Group (USA) Inc.

To my wife, Beverley, as always,

and to the other two women in my life,
Jeanne and Holly

It has served us well, this myth of Christ.

No other problem of our time is rooted so deeply in the past.

—Report of the Royal Palestine

It is difficult to distinguish fact from legend . . . I have found no consensus on what is fact; it depends on the viewpoint. Interestingly enough, legend—which is by definition distorted—gives a far more acceptable view of events. Everyone agrees on legend, but nobody agrees on facts.

No other organization in history has captured the attention and curiosity of modern readers as completely and intriguingly as the medieval order of monks known as the Knights Templar. The beginnings of that popular fascination sprang from the 1982 publication of
Holy Blood, Holy Grail
by Michael Baigent, Richard Leigh, and Henry Lincoln. I know that my own interest in the Order of the Temple was kindled by reading that book, because although I had always been fascinated by the mystery and mysticism surrounding the Templars, it was only after reading
Holy Blood, Holy
Grail
that I thought,
There has to be a truly great story
hidden in there somewhere, if a guy could just strip away
all the layers of obfuscation and find a way to really look at
who these people were and what made them tick
. I had always believed that the Knights Templar were real, very xi

human people, despite the fact that, back when I was a boy, the only pictures we had of them were stylized stone figures carved on medieval tombs, and the only reports we ever read of them told us they were a villainous and evil breed, condemned and excommunicated by the Church as heretics and apostates.

The grasping Norman knights in
Ivanhoe
were all Templars, as were the lowering, black-visaged villains in several other tales I read in boyhood, and one seldom heard, or read, anything good about the Knights Templar. They were always evil, threatening stereotypes. And yet a quiet, logic-bound area of my awareness recognized other, seldom listed and infrequently mentioned aspects of Templar history: they existed as an order for less than two hundred years, and for most of that time they were the legitimate standing army of the Catholic Church; they invented and perfected the first sophisticated, credit-and-gold-bullion–based international banking system; and they financed all the kings and kingdoms of Christendom. They also amassed the largest and most impressive portfolio of real estate holdings known to history, and to protect their enormous trading fleet, they developed the largest navy in the world. Their black and white naval ensign, a white skull and crossbones on a black field, struck the fear of God into pirates everywhere.

Most impressive of all, however, to a storyteller, was the awareness that their meteoric career effectively came to an end in a single day, on Friday the thirteenth of Author’s Note

October 1307, a date, to paraphrase Franklin Roosevelt, that will live forever, if not in infamy, then at least in mystery. And so were born in my mind the elements of my tale of the Templars: The Beginnings, designed and brought about, history tells us, by nine penniless men—two of whose names we do not even know today—who spent years digging in the bowels of Jerusalem and unearthed a treasure that made them the most powerful and influential force on earth for two centuries; The Middle, when a corps of monks, all of them wearing the equal-armed cross of the Order of the Temple, formed a standing army in the Holy Land and fought to the death, hopelessly outnumbered by the swarming legions of Saladin’s Saracens, in a vain attempt to preserve an impossible dream; and The End, when the order was over-thrown in a single day by the sinister lieutenant of a grasping, ambitious king, and only a few escaped to fos-ter and nurture a legend and a tradition of hope and regeneration.

In writing these novels for modern readers, I have had to deal with the French names of my major characters.

All the original Templar knights were French and nobly born, which meant that their names all had a “de” in the middle, as in Geoffroi de Bouillon, André de Montbard, Hugues (Hugh) de Payens, etc. Family names, or sur-names, as we know them today, were not in common use that long ago, and most of the identifiable names that existed came from the family’s birthplace or region. If a man called Guillaume (William) was born in a certain xiv

town or city, such as Chartres in France, he would be known as William of Chartres . . . Guillaume de Chartres.

That makes for tough reading in modern English, and so I have made allowances, dropping the “correct” French names in many, although not all, instances, in favor of simplifying things for modern readers. I have given all my characters “modern” sounding names, simply by angli-cizing their first names wherever possible and dropping the “de” between their first and second names. Thus Geoffroi de St. Omer becomes simply Godfrey St. Omer, Archambaud de St. Agnan becomes Archibald St. Agnan, and Payen de Montdidier becomes Payn Montdidier, but Hugues de Payens, the founder of the Knights Templar, becomes Hugh, yet remains Hugh de Payens because that is his historical identity.

I also made a note to myself, back when I first started writing these stories, to be sure to explain a few of the things that were normal eight or nine hundred years ago but would seem utterly alien and incomprehensible to modern readers. For example, no one—neither the cler-gymen who planned the Crusades nor the warriors who fought in them—ever heard the words
Crusades
or
Crusaders
. Those words came along hundreds of years later, when historians began talking about the exploits of the Christian armies in the Middle East. And the Crusaders’

word for the Holy Land was
Outremer
—the land beyond the sea. In addition to that, medieval Europe was not called Europe. It was called Christendom because all the countries in it were Christian. The name
Europe
would not come along for a few more centuries.

Even more difficult for modern people to grasp is the idea that there was no middle class in medieval Europe, and only one, all-powerful Church. There was no capacity for religious protest and no Protestants. Martin Luther would not be born for hundreds of years. There were only two kinds of people in Christendom: the haves and the have-nots (some things never change), otherwise known as aristocrats and commoners, and both were male because women had no rights and no identity in the world of medieval Christianity. The commoners, depending on which country they lived in, were known as peasants, serfs, slaves, and mesnes, and they were uneducated and largely valueless. The aristocrats, on the other hand, were the men who owned and ruled the lands, and they were divided into two halves—knights and clerics. There were no other options. If you were firstborn, you inherited. If you were not firstborn, you either became a knight or a cleric. From clerics, we get the modern word
clergyman
, because all clerics were priests and monks, but we also get the modern word
clerk
, because all clerics were expected to be both literate and numerate. Knights had no need to be literate.

Without Sin by Margaret Dickinson
Enemies of the State by M. J. Trow
The Centaur by John Updike
Sons of Mayhem 2 Chaser (Sons of Mayhem Novels, #2) by Nikki Pink
Anthem for Doomed Youth by Carola Dunn
Back in the Bedroom by Jill Shalvis
Harmless by Ernie Lindsey
Angels of Vengeance: The Disappearance Novel 3 by Birmingham, John
Angel of the North by Annie Wilkinson
The Bloody Meadow by William Ryan
Our partner