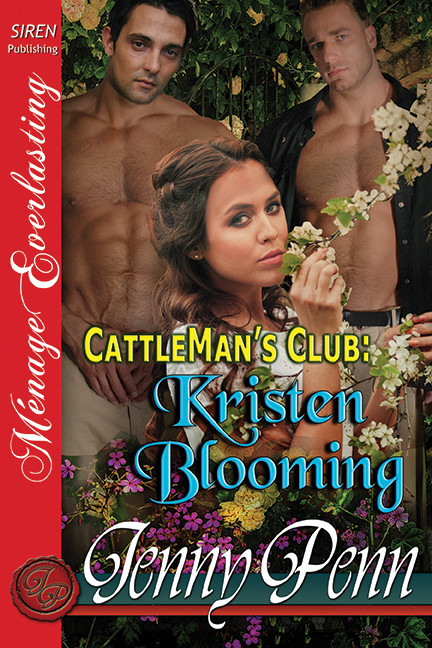 Always the good girl, Kristen’s about to take a walk on the wild side. Brandon and Dylan fall hard and fast, becoming determined to tempt Kristen into a lifestyle that leaves her uptight parents shocked and Kristen with a choice to make—live by her parents' rules or her own?

Brandon and Dylan don’t care about the rules. They just want the girl, and there isn’t anything they won’t do to claim Kristen as their own. Will they be able to convince Kristen they want her forever?

Things get complicated as her cousin Gwen’s conniving schemes start to come to light and loyalties get tested. Is Kristen willing to take a chance on Brandon and Dylan? Will she betray her parents? Her cousin?

As Kristen’s life begins to bloom, so do the hard questions she has to ask herself.

All art and logo copyright © 2015 by Siren Publishing, Inc.

If you have purchased this copy of
Kristen Blooming
by Jenny Penn from BookStrand.com or its official distributors, thank you. Also, thank you for not sharing your copy of this book.

This is Jenny Penn’s livelihood. It’s fair and simple. Please respect Jenny Penn’s right to earn a living from her work.

Kristen watched the woman cutting through the bakery with a determined stride that had everybody glancing in her direction. It helped that she was tall, well rounded, and held herself with the kind of confidence supermodels strutted with down the catwalk. The woman had it, that thing that only stars had, and Kristen was no star.

She was more like a back-up singer, part of the chorus of crazy people that she was slowly getting to know in her new hometown. Pittsview wasn’t like Dothan. It wasn’t big, not enough that a person couldn’t move around in anonymity, but here…everybody knew everybody. More importantly they all knew each other’s business, which was taking a lot of getting used to, especially now that she had some business.

“Yes, ma’am.” Kristen nodded, feeling strangely small and suddenly quite young next to this woman.

She had to be six feet tall if she was an inch and packed full of the kind of muscles normally only men had. That explained why so many of the men were afraid of her. Kristen had heard the tales and rumors surrounding Wanda and knew that she didn’t take shit from anybody.

“Oh, please, call me Wanda.” The woman waved away Kristen’s response with a warm smile as she plunked her large purse into the seat opposite Kristen and took the one next to her. “And I’m going to call you Kristen. Is that okay?”

“Yes…Wanda.” Kristen hesitated as the other woman’s gaze narrowed on her for a second before lightening up as Kristen managed to get her name out.

“That’s good, honey.” Wanda nodded to her, pausing to order a soda as the waitress stopped by before turning a curious glance back at Kristen.

There was something about Wanda’s eyes that warned Kristen that she could see deeper than the surface. It was as if she could almost feel Wanda probing at her very thoughts and weighing them. It was quite disconcerting, but no more than the woman’s bluntness.

“You look nervous as hell, honey. Something wrong?”

“No,” Kristen answered, instinctively going with the polite response, but Wanda’s lifted brow assured her the other woman knew she’d just lied. That made Kristen squirm as she tried to backtrack a little.

“It’s just that I’m not sure what I can do to help you.” Actually Kristen knew what she could do and what she should do. She didn’t do either but sat there fidgeting beneath Wanda’s studious gaze.

“It’s not what you can do for me, honey, but what I can do for you,” Wanda finally corrected her as she reached out to cover both of Kristen’s much smaller hands with one of her own. “I want to tell you how sorry I am about your cousin.”

That, along with the warmth of Wanda’s grip, had Kristen stilling as she glanced up at the other woman in amazement. Other than Dylan and Brandon, nobody had expressed their condolences about Gwen’s untimely passing. That was because nobody felt bad. Kristen knew how most of the fine citizens of Pittsview had felt about her cousin, knew, too, that whatever sympathy they did express was less than sincere.

Wanda, though, seemed different. She leaned forward, her tone growing somber and the compassion all but shining in her gaze as she gave Kristen’s hand a squeeze.

“I know that this has to be a hard and difficult time. The way people are around here…” Wanda sighed and shook her head as she cast a glance over the rest of the patrons. “They have their opinions, don’t they?”

Kristen hesitated to answer, licking her lips and following Wanda’s gaze to meet the curious looks of the other customers. They were being watched, watched and whispered about. It had been like that ever since Gwen had died.

“Yes,” Kristen finally agreed as she turned back to meet Wanda’s stare. “Some of them are even entitled to their opinions.”

“But none of them had the right to kill your cousin.” Wanda didn’t even hesitate to lay that down with a firm conviction that touched Kristen.

She and Wanda shared a look that was broken up by the return of the waitress. She dropped off Wanda’s soda and picked up both of their orders before scurrying off. After she left, the mood was different.

Wanda started in about her job, opening up to Kristen in a way that made it impossible for her not to respond in kind. Despite all the rumors and warnings, Wanda wasn’t scary in the slightest. She was just a woman, a woman who obviously cared. That was something Kristen could relate to.

Finally when the plates were cleared and the coffee had arrived, the conversation turned back around to Gwen. By then Kristen’s guards were all down, and she was certain that she could trust this woman. That really wasn’t the question. The question was whether or not she could be of any help.

“I’m not sure what I can tell you about my cousin that you probably haven’t heard all over town.” Kristen took a deep breath and dropped her gaze, hating to have to admit to the truth. “Whatever rumors you might have heard, they’re probably all true.”

“I’m not interested in rumors,” Wanda assured her, placing her hand back over Kristen’s and offering her strength. “I’m here to learn about the other side of Gwen, about what she was like as a cousin.”

“As a cousin?” Kristen hadn’t ever really thought of it that way. “I guess…she was…giving. I mean, she helped me get my job, let me move in, and even lent me money to buy the things I needed.”

“Why don’t we start there, then?” Wanda suggested. “Why don’t you tell me what it was like to move in with her?”

“Well…” Kristen paused, thinking back all those months to when she’d finally convinced her mother to let her move in with Gwen. “It was like…”

Finding Obscurity by Emma Shade
News of a Kidnapping by Gabriel García Márquez, Edith Grossman
Silent Fear by Katherine Howell
The Pyramid of Souls by Erica Kirov
Swallow the Sky: A Space Opera by Chris Mead
Clash of the Geeks by John Scalzi
Tried and True (Wild at Heart Book #1) by Mary Connealy
Power Play by Patrick Robinson
A Curious Affair by Melanie Jackson
The Ruined Map by Kobo Abe
Our partner