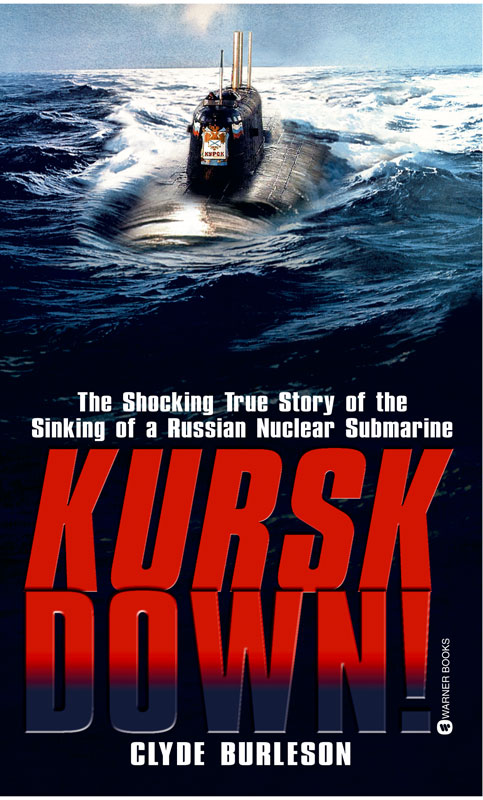 Warner Books is a division of Hachette Book Group, Inc.

PART I: THE BEAUTY

WHAT REALLY SANK THE KURSK !

KURSK
DOWN! is the first complete story of the disaster and includes an inside-Russia look at the political calamity that ensued.

KURSK
DOWN! provides information from translated official Russian Navy reports on the accident, then shows how details in this material have been altered to put the best face on actions taken by naval leaders.

KURSK
DOWN! reveals the real reason behind the loss of this great vessel and her brave crew.

KURSK
DOWN! conclusively proves what the Russian Navy was so loath to publicly admit—that an enormous explosion on board the
Kursk
sealed her fate.

ON THE MARITIME DISASTER OF THE DECADE.

AND THE ONLY BOOK THAT GIVES YOU THE
REAL
STORY.

I am grateful to a very large number of people who assisted in developing the information contained in this book. Many of those who contributed do not wish to be named. In any case, it would require several pages to recognize all who assisted.

A few individuals, however, did much to help make this story possible. So a special thanks should go to Linda Stares for translations and explaining Russian customs, George Helland for his insights into Russia and information he provided, Karl Olivecrona for geographical assistance, Margaretha Olivecrona for help with language problems, John Brandon, Owen Osmotherly, and Nick Jones of Oil States MCS for technical information, and Peter Miller, who represented the book.

Several organizations also proved to be helpful. These include Bellona, a diligent and effective group,
The Moscow Times
,
The St. Petersburg Times
, the Russian Naval Museum,
Itar-Tass
, and
www.kursk.strana.ru/www.kurskl4l.org
, vital online news sources.

I also wish to single out Rob McMahon, the editor at Warner Books who had faith in this project and did such a valuable editing job. Thank you, Rob.

And thank you, too, Suzy, for everything.

We live in a communications and information age. Today, a newsworthy event that holds public attention is covered by the media with an unprecedented thoroughness, as well as a wide divergence of viewpoints.

All this makes it easier than ever before in history to amass a huge number of facts about any gripping incident. The sheer volume of available information, however, makes it difficult to organize it all into a manageable format. And often, that ordering process reveals conflicting reports, which produce more questions than answers.

That was the case in the development of
KURSK
DOWN!

The Internet provided access to daily news sources as well as trade publications in Russia, Europe, England, and the United States. These resources, when properly sorted, delivered an overall picture of the disaster. That same material also produced names and titles of people who were familiar with various aspects of the
Kursk
tragedy. Some of those individuals agreed to discuss the matter over the telephone. Many others did not. Language barriers provided additional stumbling blocks that had to be overcome.

Interviews produced new insights and provided a view beyond published reports. And as information was amassed, translations of official Russian Navy documents took on new meanings. From this vantage point, the structure, contents, and theme of the book became clear.

KURSK
DOWN! is more than the recounting of a maritime disaster. It is an adventurous view of a great nation at a crossroads—which makes the story all the more compelling.

S
HE WAS A BEAUTY
. T
HERE WAS NO OTHER WORD
. SHE SAT wide and low in the water, her curving hull a black that absorbed rather than reflected the soft Arctic summer sunlight. She was a leviathan of the deep, made by the hands of man to live under the sea. Here was a dark angel of death, a wreaker of havoc, bringer of war and destruction.

Those who served on her revered her. Some also feared her, because of her power and great size.

Although larger than most ships, submarines are traditionally called boats. This boat was named
K-141
or the
Kursk
—not a graceful title for a lady of her breeding. But the Russian Navy is more practical than poetic. And the city of Kursk, grateful for the honor, has a heroic past.

She’d first been christened Project 949A. Carefully conceived, she was a vastly improved enlargement of an earlier model.
K-141
was one of the biggest nuclear attack submarines in the world.

Her design was radical. She had a double hull. The outer shell, called the superstructure, gave the boat its distinctive oval shape.

Covered with a rubberlike polymer that slicked the surface to add silence and more speed underwater, she had a dark, wet sheen as opposed to the dry look of paint on metal.

Between the superstructure and the inner hull was a space of some 7 to 12 feet. A thousand miles of wiring, hydraulic tubing, piping, and bracing, filled this cavity. Here, too, 24 cruise missiles were stored in their readyto-launch tubes. Submerged and hiding in the depths,
K-141
could rip-fire a salvo of atomic warheads that doomed targets over 600 miles away.

The inner hull encapsulated the living part of the vessel with crew, controls, and nuclear reactors. Each compartment of the
Kursk
had three or four decks and housed a specific function. Watertight doors separated every section.

The design team planned the double hull to make her a hardier lady. They wanted her to be able to withstand a direct hit by a conventional enemy torpedo or depth charge. To reflect their intent, they dubbed her “unsinkable!”

K-141
was laid down in 1992 at the yards in Severodvinsk, a famed shipbuilding town on the Beloye More or White Sea. Skilled craftsmen cut and shaped each steel plate. Every centimeter of every weld was tested, every joint pressure-checked and x-rayed. Form followed function and beauty emerged. The boat’s function was devastation. Therefore, the beauty was tinged with subdued violence.

Launched in 1994, she was almost 500 feet long and nearly 60 feet wide. Lying still, her bottom reached some 30 feet beneath the cold water. The line of her vast curving deck was broken by a large sail or conning tower bearing the proud red and gold symbol of the Russian Navy. Jutting upward from the sail, like shining lances, were slender radio masts, periscopes, and air intakes.

At the rear, her huge rudder reached clear of the water, hinting at the boat’s enormous maneuverability.

Submerged, she was home. She could remain down for 120 days, traveling at a speed of 28 knots, and dive to depths approaching 3,000 feet. When running, she hummed and the twin propellers made a distinctive cavitation sound. When hiding, she could lie still and silent, defying detection.

K-141
was the best of her sisters. There was pride in those assigned to the other boats. Those who served on the
Kursk
were reverent. They knew and sensed her superiority. An indescribable feeling ran through her many corridors, compartments, and decks. It was as though the iron that formed her was special—as if she were made of steel from meteorites, the metal fallen to earth after being forged by a journey through space.

While her destructive power might have had many uses in time of war, she was created for one purpose— to hunt and sink aircraft carriers. Hers was a daunting assignment. She had to avoid the protective cordon of ships ringing her prey, slip quietly past opposing submarines, attain a launch position for her torpedoes or missiles, and make her kill.

The explosion that had ripped through the submarine polluted the air with smoke and the sharp stench of burned electrical insulation. The small group of men who survived had found each other in the aftermath and taken shelter in the massive boat’s ninth compartment.

Moving about was difficult because debris covered the steeply slanting metal deck. That was just as well because movement increased their respiration rates. Breathing faster used up their small supply of life-giving air more quickly.

Captain-Lieutenant Dmitry Kolesnikov, in his role as senior officer left alive, had assumed command. Standing six feet three inches tall and weighing over 200 pounds, he exuded a friendly confidence. The combination of a handsome, youthful face, reddish-blond hair, and blue eyes added to his charm. Even though he was young, he was an experienced, competent submariner. He knew their situation was desperate. The others knew it, too.

That understanding must have made his efforts to maintain morale and discipline more difficult.

There was no way to escape. They were trapped on the bottom, 300 feet underwater, surrounded by an icy sea. The escape hatch in their compartment might have been damaged. It made little difference. With no breathing apparatus, chances of making a free ascent to the surface were slim. Even if they did succeed, they had no inflatable life rafts. How long would they last in the freezing water fighting towering waves? A few minutes? A half hour? No more, surely. The Navy was coming to their rescue. What they had to do was remain a team and hold out until help arrived.

Waiting, shivering in the growing cold, each man was alone with his own thoughts and hopes. Help was on the way. It had to be. The Navy would not desert them.

Cut off from the world of warm sunlight and fresh air, a horrid sense of isolation weighed on the group. And beyond question, Dmitry had to have wondered what orders Captain Lyachin would have issued had he been present.

The submarine commander Dmitry so respected wasn’t able to help him. Captain Lyachin was dead. The entire crew, except the pitiful few gathered so wretchedly together, were dead, too.

Several of the survivors were seriously injured and their pain must have added to Dmitry’s misery. These men were his responsibility. And there was nothing he could do to help them. The small rolls of gauze bandages and tiny bottles of antiseptic in the only first aid kits available were for minor emergencies. They had never been intended to deal with burns and wounds of such serious magnitude.

Repeated intercom calls to the hospital-like sick bay near the crew quarters in Compartment 4 went unanswered. That was not surprising. The blast that had ripped through the submarine originated in a forward portion of the boat.

As senior officer, it was up to Dmitry to provide leadership and bolster the men’s spirits. Part of his duties included keeping a record of their plight. Using what paper he could find, he made careful notes. Including himself and his best friend, Rashid, there were 23 survivors. Not many, considering 118 had been on board when they sailed.

He had selected the ninth compartment as headquarters. There was an escape hatch where a DSRV could dock to evacuate them. Despite constant budget cuts, the Northern Fleet still had two of the newer Deep Sea Rescue Vehicles, plus a third older model. So they had hope.

Help would come. He was a member of the most elite group in the Soviet Navy. If he could keep the men acting as a unit and alive long enough, the Navy would rescue them. And he could return to Olga—his Olechka—knowing he’d done his duty. Dmitry and Olga had been married only a few months and she needed him. He needed her, too. Then there was his mother . . . and his dad . . . and his brother.