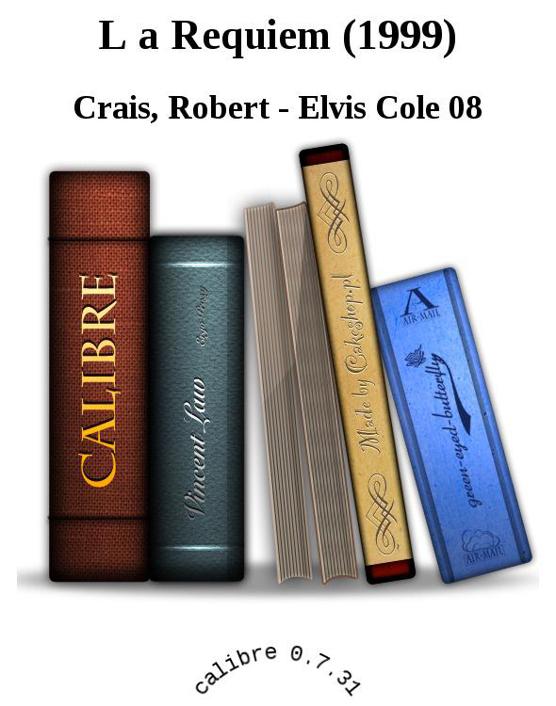 Uniformed LAPD Officer Joe Pike could hear the banda music even with the engine idling, the a.c. jacked to meat locker, and the two-way crackling callout codes to other units.

The covey of Latina street kids clumped outside the arcade giggled at him, whispering things to each other that made them flush. Squat brown men come up through the fence from Zacatecas milled on the sidewalk, shielding their eyes from the sun as veteranos told them about Sawtelle over on the Westside where they could find day labor jobs, thirty dollars cash, no papers required. Here in Rampart Division south of Sunset, Guatemalans and Nicaraguans simmered with Salvadorans and Mexican nationals in a sidewalk machaca that left the air flavored with epizote, even here within the sour cage of the radio car.

Pike watched the street kids part like water when his partner hurried out of the arcade. Abel Wozniak was a thick man with a square head and cloudy, slate eyes. Wozniak was twenty years older than Pike and had been on the street twenty years longer. Once the best cop that Pike had then met, Wozniak's eyes were now strained. They'd been riding together for two years, and the eyes hadn't always been that way. Pike regretted that, but there wasn't anything he could do about it.

Especially now when they were looking for Ramona Anny Escobar.

Wozniak lurched in behind the wheel, adjusting his gun for the seat, anxious to roll even with the tension between them as thick as clotted blood. His informant had come through.

"Does DeVille have the girl? "

"My guy eyeballed a little girl, but he can't say if she s still with him."

Wozniak snapped the car into gear and rocked away from the curb. They didn't roll Code Three. No lights, no siren. The Islander Palms was less than five blocks away, here on Alvarado Boulevard just south of Sunset. Why send an announcement?

"Woz? Would DeVille hurt her? "

"I told you, afuckin' perv like this would be better off with a bullet in his head."

It was eleven-forty on a Tuesday morning. At nine-twenty, a five-year-old girl named Ramona Ann Escobar had been playing near the paddleboat concession in Echo Park when her mother, a legal emigre from Guatemala, had turned away to chat with friends. Witnesses last saw Ramona in the company of a man believed to be one Leonard DeVille, a known pedophile who'd been sighted working both Echo and Mac-Arthur parks for the past three months. When the dispatch call had come about the missing girl, Wozniak had begun working his street informants. Wozniak, having been on the street forever, knew everyone and how to find them. He was a treasure trove of information that Pike valued and respected, and didn't want to lose. But Pike couldn't do anything about that, either.

Pike stared at Wozniak until Wozniak couldn't handle the weight any longer and glanced over. They were forty seconds away from the Islander Palms. "Oh, for Christ's sake, what?"

Wozniak's eyes went back to the street, and his face tightened. "I'm telling you, Joe. Backoff with this. I'm not going to talk about it anymore."

"You've got Paulette and Evelyn to think about."

The cloudy eyes flicked to Pike, as bottomless and as dangerous as a thunderhead.

"I've been thinking about them, Pike. You bet your ass."

For just an instant, Pike thought Wozniak's eyes filled. Then Wozniak gave a shudder as if he were shaking out his feelings, and pointed.

"There it is. Now shut the fuck up and play like a cop."

The Islander Palms was a white stucco dump: two stories of frayed carpets, stained beds, and neon palms that looked tacky even in Los Angeles, all of it shaped into an L around a narrow parking lot. The typical customers were whores renting by the hour, wannabe pornographers shooting "amateur" videos, and rent jumpers needing a place to stay while they found a new landlord to stiff.

Pike followed Wozniak into the manager's office, a skinny Hindu with watery eyes. First thing he said was, "I do not wan't trouble, please."

Wozniak had the lead.

"We're looking for a man with a little girl. His name is Leonard De Ville, but he might've used another name."

The Hindu didn't know the name, or about a little girl, but he told them that a man matching the description Woz provided could be found on the second floor in the third room from the top of the L.

Wozniak went out the door and up the stairs without answering. Pike thought then that he should go back to the car and call, but you don't let your partner go up alone. Pike followed.

They found the third door, listened, but heard nothing. The drapes were pulled. Standing on the exposed balcony, Pike felt as if they were being watched.

Wozniak took the knob side of the door, Pike the hinges. Wozniak rapped on the door, identifying himself as a Los Angeles police officer. Everything about Joe made him want to be the first one inside, but they had settled that two years ago. Wozniak drove, Wozniak went in first, Wozniak called how they made the play. Twenty-two years on the job against Pike s three bought you that. They had done it this way two hundred times.

When De Ville opened the door, they pushed him backward, Wozniak going first and pushing hard.

DeVille said, "Hey, what is this?"Like he'd never been rousted before.

The room was tattered and cheesy, with a closet and bath off the rear. A rumpled double bed rested against the wall like some kind of ugly altar, its dark red bedspread stained and threadbare, one of the stains looking like Mickey Mouse. The room's only other piece of furniture was a cheap dresser edged with cigarette burns and notches cut by a sharp knife. Wozniak held DeVille as Pike cleared the bathroom and the closet, looking for Ramona.

"Anything else? Clothes, suitcase, toothbrush?"

"Nothing." Indicating that DeVille hadn't been living here, and didn't intend to. He had other uses for the mom.

Wozniak, who had busted DeVille twice in the past, said, "Where is she, Lennie? "

DeVille spread his hands, flashing a nervous smile. "I got no camera. I'm telling you, I'm off that."

Leonard DeVille was five-eight, with a fleshy body, dyed blond hair, and skin like a pineapple. The hair was slicked straight back, and held with a rubber band. Pike knew that DeVille was lying, but waited to see how Woz would play it. Even with only three years on the job, Pike knew that pedophiles were always pedophiles. You could bust them, treat them, counsel them, whatever, but when you released them back into the world, they were still child molesters and it was only a matter of time.

Wozniak hooked a hand under the foot of the bed and heaved the bed over. DeVille jumped back and stumbled into Pike, who caught and held him. A rumpled overnight bag was nesting in about a million dust bunnies where the bed had been.

Wozniak said, "Lennie, you are about as dumb as they get."

"Hey, that ain't mine. I got nothing to do with that bag." DeVille was so scared that he sprouted sweat like a rainstorm.

Wozniak opened the bag and dumped out a Polaroid camera, better than a dozen film packs, and at least a hundred pictures of children in various stages of undress. That s how a guy like DeVille made his living, snapping pictures and selling them to other perverts.

Wozniak toed through the pictures, his face growing darker and more contained. Pike couldn't see the pictures from where he stood, but he could see the vein pulsing in Wozniak's temple. He thought that Wozniak must be thinking about his own daughter, but maybe not. Maybe Wozniak was still thinking about the other thing.

De Ville's voice went higher. "That stuff isn't mine. I never saw it before."

"I can still smell the developing chemicals. You didn't take this more than an hour ago."

Wozniak stared at the picture. Pike still couldn't see it.

"She looks about five. She matches the physical description they gave us. Pretty little girl. Innocent. Now she's not innocent anymore."

Abel Wozniak stood and drew his gun. It was the new Beretta 9-millimeter that LAPD had just mandated.

"If you hurt that child, I'll fucking kill you."

Wozniak stepped past Pike and snapped the Beretta backhand, slamming DeVille in the side of the head and dropping him like a bag of garbage.

Pike jumped between them, grabbing Wozniak by the arms and pushing him back. "That doesn't help get the girl."

Then Wozniak's eyes came to Pike; hard, ugly little rivets with something behind the clouds.

When the two police officers went up the stairs, Fahreed Abouti, the manager, watched until they pushed the blond man back into his room. The police often came to his motel to bust the prostitutes and Johns and drug dealers, and Fahreed never passed up a chance to watch. Once, he had seen a prostitute servicing the officers who had come to arrest her, and another time he watched as three officers beat a rapist until all the man's teeth were gone. There was always something wonderful to see. It was better than Wheel of Fortune.

You had to be careful, though.

As soon as the upstairs door closed, Fahreed crept up the stairs. If you got too close, or if they caught you, the police grew angry. Once, a SWAT officer in the armor and the helmet and with the big gun had grown so angry that he'd knocked Fahreed's turban into a puddle of transmission fluid. The cleaning cost had been horrendous.

The shouting started when Fahreed was still on the stairs. He couldn't understand what was being said, only that the words were angry. He eased along the second-floor balcony, trying to get closer, but just as he reached the room, the shouting stopped. He cursed the fates, thinking he'd missed all the fun, when suddenly there was a single loud shout from inside, then a thunderous, deafening explosion.

People on the street stopped in their tracks and looked. A woman pointed, and a man across the parking lot ran.

Fahreed's heart pounded, because even a Hindu knew a gunshot. He thought the blond man might be dead. Or perhaps he had the officers.

Fahreed heard nothing within the room.

"Is everyone all right?"

Perhaps they had jumped from the bathroom window into the alley behind.

Fahreed's palms were damp, and all his swirling fears demanded that he race back to his office and pretend to have heard nothing, but instead he threw open the door.

The younger officer, the tall one with the dark glasses and the empty face, spun toward him and aimed an enormous revolver. Fahreed thought in that instant that he would surely die.

The older officer was without a face, his remains covered in blood. The blond man was dead, too, his face a mask of crimson. The floor and walls and ceiling were sprayed red.

The tall officer's gun never wavered. Fahreed stared into his dark bottomless glasses, and saw that they were misted with blood.

The tall officer dropped to his fallen partner, and began CPR.

Without looking up, the tall officer said, "Call 911."

Fahreed Abouti ran for the phone.