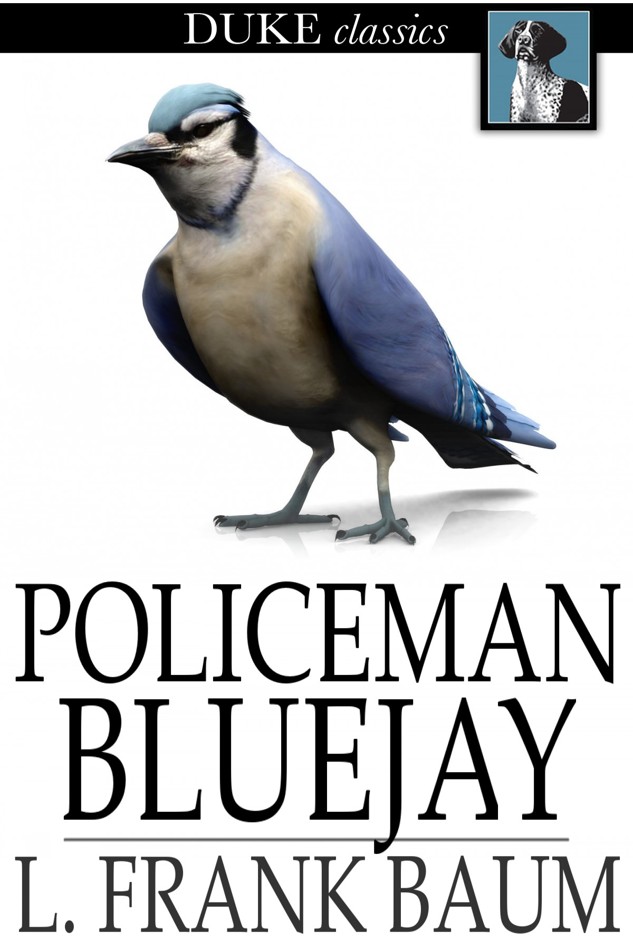 *
Policeman Bluejay
First published in 1907
ISBN 978-1-62011-912-9
Duke Classics
© 2012 Duke Classics and its licensors. All rights reserved.
While every effort has been used to ensure the accuracy and reliability of the information contained in this edition, Duke Classics does not assume liability or responsibility for any errors or omissions in this book. Duke Classics does not accept responsibility for loss suffered as a result of reliance upon the accuracy or currency of information contained in this book.
Contents
*
To the Children
Chapter I - Little Ones in Trouble
Chapter II - The Forest Guardian
Chapter III - The Child-Larks
Chapter IV - An Afternoon Reception
Chapter V - The Oriole's Story
Chapter VI - A Merry Adventure
Chapter VII - The Bluejay's Story
Chapter VIII - Mrs. Hootaway
Chapter IX - The Destroyers
Chapter X - In the Eagle's Nest
Chapter XI - The Orphans
Chapter XII - The Guardian
Chapter XIII - The King Bird
Chapter XIV - A Real Fairyland
Chapter XV - The Lake of Dry Water
Chapter XVI - The Beauty Dance
Chapter XVII - The Queen Bee
Chapter XVIII - Good News
Chapter XIX - The Rebels
Chapter XX - The Battle
Chapter XXI - The Tingle-Berries
Chapter XXII - The Transformation
To the Children
*

I MUST admit that the great success of the "TWINKLE TALES" has
astonished me as much as it has delighted the solemn-eyed, hard working
publishers. Therefore I have been encouraged to write a new "TWINKLE
BOOK," hoping with all my heart that my little friends will find it
worthy to occupy a place beside the others on their pet bookshelves.
And because the children seem to especially love the story of "Bandit
Jim Crow," and bird-life is sure to appeal alike to their hearts and
their imaginations, I have again written about birds.

The tale is fantastical, and intended to amuse rather than instruct;
yet many of the traits of the feathered folk, herein described, are in
strict accordance with natural history teachings and will serve to
acquaint my readers with the habits of birds in their wildwood homes.
At the same time my birds do unexpected things, because I have written
a fairy tale and not a natural history.

The question is often asked me whether Twinkle and Chubbins were asleep
or awake when they encountered these wonderful adventures; and it
grieves me to reflect that the modern child has been deprived of fairy
tales to such an extent that it does not know—as I did when a girl—
that in a fairy story it does not matter whether one is awake or not.
You must accept it as you would a fragrant breeze that cools your brow,
a draught of sweet water, or the delicious flavor of a strawberry, and
be grateful for the pleasure it brings you, without stopping to
question too closely its source.

For my part I am glad if my stories serve to while away a pleasant hour
before bedtime or keep one contented on a rainy day. In this way they
are sure to be useful, and if a little tenderness for the helpless
animals and birds is acquired with the amusement, the value of the
tales will be doubled.

Chapter I - Little Ones in Trouble
*

"It was here a minute ago," declared Twinkle.

"But it isn't here now," replied the boy.

It really
was
queer. They had followed the straight path into the
great forest, and had only stopped for a moment to sit down and rest,
with the basket between them and their backs to a big tree. Twinkle
winked just twice, because she usually took a nap in the afternoon, and
Chubbins merely closed his eyes a second to find out if he could see
that long streak of sunshine through his pink eyelids. Yet during this
second, which happened while Twinkle was winking, the path had run away
and left them without any guide or any notion which way they ought to
go.

Another strange thing was that when they jumped up to look around them
the nearest trees began sliding away, in a circle, leaving the little
girl and boy in a clear space. And the trees continued moving back and
back, farther and farther, until all their trunks were jammed tight
together, and not even a mouse could have crept between them. They made
a solid ring around Twinkle and Chubbins, who stood looking at this
transformation with wondering eyes.

"It looks that way," replied Twinkle, thoughtfully. "Isn't it lucky,
Chub, we have the basket with us? If it wasn't for that, we might
starve to death in our prison."

"Oh, well," replied the little fellow, "the basket won't last long.
There's plenty of starve in the bottom of it, Twinkle, any way you can
fix it."

"That's so; unless we can get out. Whatever do you suppose made the
trees behave that way, Chubbins?

Just then a queer creature dropped from a tree into the ring and began
moving slowly toward them. It was flat in shape, like a big turtle;
only it hadn't a turtle's hard shell. Instead, its body was covered
with sharp prickers, like rose thorns, and it had two small red eyes
that looked cruel and wicked. The children could not see how many legs
it had, but they must have been very short, because the creature moved
so slowly over the ground.

When it had drawn near to them it said, in a pleading tone that sounded
soft and rather musical:

"Little girl, pick me up in your arms, and pet me!"

"My! I couldn't
think
of doing such a thing," she answered.

Then the creature said:

"Little boy, please pick me up in your arms, and pet me!"

"Go 'way!" shouted Chubbins. "I wouldn't touch you for anything."

The creature turned its red eyes first upon one and then upon the
other.

"Listen, my dears," it continued; "I was once a beautiful maiden, but a
cruel tuxix transformed me into this awful shape, and so must I remain
until some child willingly takes me in its arms and pets me. Then, and
not till then, will I be restored to my proper form."

"Don't believe it! Don't believe it!" cried a high, clear voice, and
both the boy and the girl looked quickly around to see who had spoken.
But no one besides themselves was in sight, and they only noticed a
thick branch of one of the trees slightly swaying its leaves.

"What is a tuxix?" asked Twinkle, who was beginning to feel sorry for
the poor creature.

"It is a magician, a sorcerer, a wizard, and a witch all rolled into
one," was the answer; "and you can imagine what a dreadful thing that
would be."

"Be careful!" cried the clear voice, again. "It is the tuxix herself
who is talking to you. Don't believe a word you hear!"

At this the red eyes of the creature flashed fire with anger, and it
tried to turn its clumsy body around to find the speaker. Twinkle and
Chubbins looked too, but only heard a flutter and a mocking laugh
coming from the trees.

"If I get my eye on that bird, it will never speak again," exclaimed
the creature, in a voice of fury very different from the sweet tones it
had at first used; and perhaps it was this fact that induced the
children to believe the warning was from a friend, and they would do
well to heed it.

"Whether you are the tuxix or not," said Twinkle, "I never will touch
you. You may be sure of that."

"Nor I," declared Chubbins, stoutly, as he came closer to the girl and
grasped her hand in his own.

At this the horrid thing bristled all its sharp prickers in anger, and
said:

"Then, if I cannot conquer you in one way, I will in another. Go, both
of you, and join the bird that warned you, and live in the air and the
trees until you repent your stubbornness and promise to become my
slaves. The tuxix has spoken, and her magical powers are at work. Go!"

In an instant Twinkle saw Chubbins shoot through the air and disappear
among the leaves of one of the tall trees. As he went he seemed to grow
very small, and to change in shape.

She was afraid of losing Chubbins, so she flew after him, feeling
rather queer herself, and a moment after was safe in the tall tree,
clinging with her toes to a branch and looking in amazement at the boy
who sat beside her.

Chubbins had been transformed into a pretty little bird—all, that is,
except his head, which was Chubbins' own head reduced in size to fit
the bird body. It still had upon it the straw hat, which had also grown
small in size, and the sight that met Twinkle's eyes was so funny that
she laughed merrily, and her laugh was like the sweet warbling of a
skylark.

Chubbins looked at her and saw almost what she saw; for Twinkle was a
bird too, except for her head, with its checked sunbonnet, which had
grown small enough to fit the pretty, glossy-feathered body of a lark.

Both of them had to cling fast to the branch with their toes, for their
arms and hands were now wings. The toes were long and sharp pointed, so
that they could be used in the place of fingers.

"My!" exclaimed Twinkle; "you're a queer sight, Chubbins!"

"So are you," answered the boy. "That mean old thing must have 'witched
us."

"Yes, we're 'chanted," said Twinkle. "And now, what are we going to do
about it? We can't go home, for our folks would be scared nearly into
fits. And we don't know the way home, either."

"That's so," said Chubbins, fluttering his little wings to keep from
falling, for he had nearly lost his balance.

"What shall we do?" she continued.

"Why, fly around and be gay and happy," said a clear and merry voice
beside them. "That's what birds are expected to do!"

Twinkle and Chubbins twisted their heads around on their little
feathered necks and saw perched beside them a big bird of a most
beautiful blue color. At first they were a bit frightened, for the
newcomer seemed of giant size beside their little lark bodies, and he
was, moreover, quite fierce in appearance, having a crest of feathers
that came to a point above his head, and a strong beak and sharp
talons. But Twinkle looked full into the shrewd, bright eye, and found
it good humored and twinkling; so she plucked up courage and asked:

"Were you speaking to us?"

"Very likely," replied the blue bird, in a cheerful tone. "There's no
one else around to speak to."

"And was it you who warned us against that dreadful creature below in
the forest?" she continued.

"Then," said Twinkle, "we are very much obliged to you."

"Don't mention it," said the other. "I'm the forest policeman—
Policeman Bluejay, you know—and it's my duty to look after everyone
who is in trouble."

"Well, it might have been worse," remarked Policeman Bluejay, making a
chuckling sound in his throat that Twinkle thought was meant for a
laugh. "If you had ever touched the old tuxix she would have
transformed you into toads or lizards. That is an old trick of hers, to
get children into her power and then change them into things as
loathsome as herself."

"I wouldn't have touched her, anyhow," said Twinkle.

"Nor I!" cried Chubbins, in his shrill, bird-like voice. "She wasn't
nice."

The Beetle Leg by John Hawkes
All New People by Zach Braff
Vultures at Twilight by Charles Atkins
Idolon by Mark Budz
Killer Nurse by John Foxjohn
The Kitchen Daughter by McHenry, Jael
The Wildlife Games by Bindi Irwin
The Law of Desire by Gwyneth Bolton
The Defector by Daniel Silva
Annihilation (Star Force Series) by B. V. Larson
Our partner