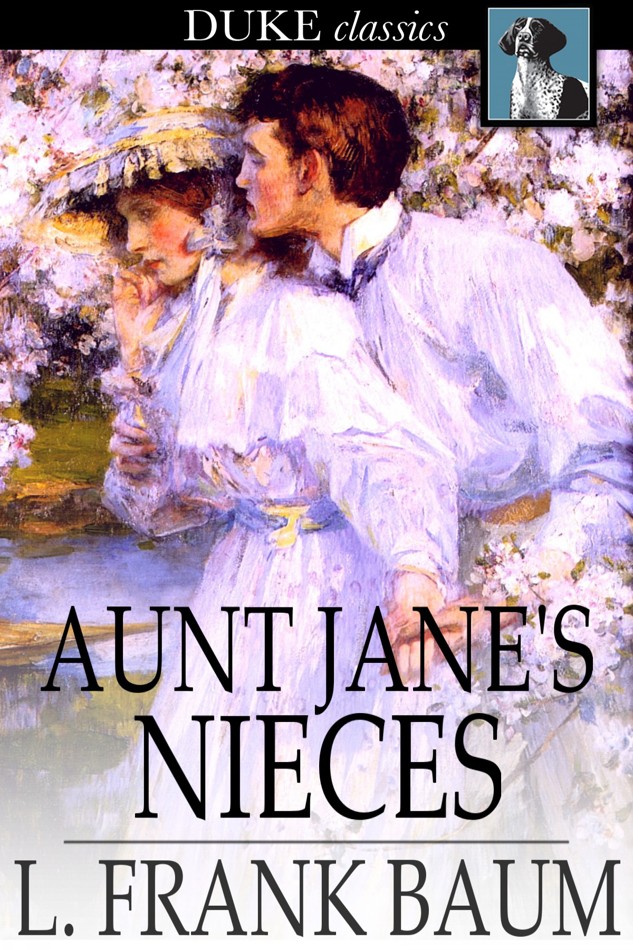 Professor De Graf was sorting the mail at the breakfast table.

"Here's a letter for you, Beth," said he, and tossed it across the
cloth to where his daughter sat.

The girl raised her eyebrows, expressing surprise. It was something
unusual for her to receive a letter. She picked up the square envelope
between a finger and thumb and carefully read the inscription, "Miss
Elizabeth De Graf, Cloverton, Ohio." Turning the envelope she found on
the reverse flap a curious armorial emblem, with the word "Elmhurst."

Then she glanced at her father, her eyes big and somewhat startled
in expression. The Professor was deeply engrossed in a letter from
Benjamin Lowenstein which declared that a certain note must be paid at
maturity. His weak, watery blue eyes stared rather blankly from behind
the gold-rimmed spectacles. His flat nostrils extended and compressed
like those of a frightened horse; and the indecisive mouth was
tremulous. At the best the Professor was not an imposing personage.
He wore a dressing-gown of soiled quilted silk and linen not too
immaculate; but his little sandy moustache and the goatee that
decorated his receding chin were both carefully waxed into sharp
points—an indication that he possessed at least one vanity. Three
days in the week he taught vocal and instrumental music to the
ambitious young ladies of Cloverton. The other three days he rode to
Pelham's Grove, ten miles away, and taught music to all who wished to
acquire that desirable accomplishment. But the towns were small and
the fees not large, so that Professor De Graf had much difficulty in
securing an income sufficient for the needs of his family.

The stout, sour-visaged lady who was half-hidden by her newspaper at
the other end of the table was also a bread-winner, for she taught
embroidery to the women of her acquaintance and made various articles
of fancy-work that were sold at Biggar's Emporium, the largest store
in Cloverton. So, between them, the Professor and Mrs. DeGraf managed
to defray ordinary expenses and keep Elizabeth at school; but there
were one or two dreadful "notes" that were constantly hanging over
their heads like the sword of Damocles, threatening to ruin them at
any moment their creditors proved obdurate.

Finding her father and mother both occupied, the girl ventured to open
her letter. It was written in a sharp, angular, feminine hand and read
as follows:

"My Dear Niece: It will please me to have you spend the months of July
and August as my guest at Elmhurst. I am in miserable health, and
wish to become better acquainted with you before I die. A check for
necessary expenses is enclosed and I shall expect you to arrive
promptly on the first of July.

A low exclamation from Elizabeth caused her father to look in her
direction. He saw the bank check lying beside her plate and the sight
lent an eager thrill to his voice.

"A letter from Aunt Jane."

Mrs. De Graf gave a jump and crushed the newspaper into her lap.

"Aunt Jane has invited me to spend two months at Elmhurst" said
Elizabeth, and passed the letter to her mother, who grabbed it
excitedly.

"How big is the check, Beth?" enquired the Professor, in a low tone.

"A hundred dollars. She says it's for my expenses.

"Huh! Of course you won't go near that dreadful old cat, so we can use
the money to better advantage."

The harsh, cutting voice was that of his wife, and the Professor
shrank back in his chair.

"Your sister Jane is a mean, selfish, despicable old female," he
muttered. "You've said so a thousand times yourself, Julia."

"My sister Jane is a very wealthy woman, and she's a Merrick,"
returned the lady, severely. "How dare you—a common De Graf—asperse
her character?"

"The De Grafs are a very good family," he retorted.

"I can't," said the Professor. "But they're decent, and they're
generous, which is more than can be said for your tribe."

"She shan't. Your sister refused to loan me fifty dollars last year,
when I was in great trouble. She hasn't given you a single cent since
I married you. No daughter of mine shall go In Elmhurst to be bullied
and insulted by Jane Merrick."

"Adolph, try to conceal the fact that you're a fool," said his wife.
"Jane is in a desperate state of health, and can't live very long at
the best. I believe she's decided to leave her money to Elizabeth, or
she never would have invited the child to visit her. Do you want to
fly in the face of Providence, you doddering old imbecile?"

"No," said the Professor, accepting the doubtful appellation without a
blush. "How much do you suppose Jane is worth?"

"A half million, at the very least. When she was a girl she inherited
from Thomas Bradley, the man she was engaged to marry, and who was
suddenly killed in a railway accident, more than a quarter of a
million dollars, besides that beautiful estate of Elmhurst. I don't
believe Jane has even spent a quarter of her income, and the fortune
must have increased enormously. Elizabeth will be one of the
wealthiest heiresses in the country!"

"If she gets the money, which I doubt," returned the Professor,
gloomily.

"Why should you doubt it, after this letter?"

"You had another sister and a brother, and they both had children,"
said he.

"They each left a girl. I admit. But Jane has never favored them
any more than she has me. And this invitation, coming; when Jane is
practically on her death bed, is a warrant that Beth will get the
money."

"I hope she will," sighed the music teacher. "We all need it bad
enough, I'm sure."

During this conversation Elizabeth, who might be supposed the one most
interested in her Aunt's invitation, sat silently at her place, eating
her breakfast with her accustomed calmness of demeanor and scarcely
glancing at her parents.

She had pleasant and quite regular features, for a girl of fifteen,
with dark hair and eyes—the "Merrick eyes," her mother proudly
declared—and a complexion denoting perfect health and colored with
the rosy tints of youth. Her figure was a bit slim and unformed,
and her shoulders stooped a little more than was desirable; but in
Cloverton Elizabeth had the reputation of being "a pretty girl," and a
sullen and unresponsive one as well.

Presently she rose from her seat, glanced at the clock, and then went
into the hall to get her hat and school-books. The prospect of being
an heiress some day had no present bearing on the fact that it was
time to start for school.

Her father came to the door with the check in his hand.

"Just sign your name on the back of this, Beth," said he, "and I'll
get it cashed for you."

The girl shook her head.

"No, father," she answered. "If I decide to go to Aunt Jane's I must
buy some clothes; and if you get the money I'll never see a cent of
it."

"When will you decide?" he asked.

"There's no hurry. I'll take time to think it over," she replied. "I
hate Aunt Jane, of course; so if I go to her I must be a hypocrite,
and pretend to like her, or she never will leave me her property.

"Perhaps it will be worth while; but if I go into that woman's house
I'll be acting a living lie."

"But think of the money!" said her mother.

"I do think of it. That's why I didn't tell you at once to send the
check back to Aunt Jane. I'm going to think of everything before I
decide. But if I go—if I allow this money to make me a hypocrite—I
won't stop at trifles, I assure you. It's in my nature to be
dreadfully wicked and cruel and selfish, and perhaps the money isn't
worth the risk I run of becoming depraved."

"Good-bye; I'm late now," she continued, in the same quiet tone, and
walked slowly down the walk.

The Professor twisted his moustache and looked into his wife's eyes
with a half frightened glance.

"She's very like her Aunt Jane," returned Mrs. De Graf, thoughtfully
gazing after her daughter. "But she's defiant and wilful enough for
all the Merricks put together. I do hope she'll decide to go to
Elmhurst."

In the cosy chamber of an apartment located in a fashionable quarter
of New York Louise Merrick reclined upon a couch, dressed in a
dainty morning gown and propped and supported by a dozen embroidered
cushions.

Upon a taboret beside her stood a box of bonbons, the contents of
which she occasionally nibbled as she turned the pages of her novel.

The girl had a pleasant and attractive face, although its listless
expression was singular in one so young. It led you to suspect that
the short seventeen years of her life had robbed her of all the
anticipation and eagerness that is accustomed to pulse in strong young
blood, and filled her with experiences that compelled her to accept
existence in a half bored and wholly matter-of-fact way.

The room was tastefully though somewhat elaborately furnished; yet
everything in it seemed as fresh and new as if it had just come from
the shop—which was not far from the truth. The apartment itself
was new, with highly polished floors and woodwork, and decorations
undimmed by time. Even the girl's robe, which she wore so gracefully,
was new, and the books upon the center-table were of the latest
editions.

The portiere was thrust aside and an elderly lady entered the room,
seating herself quietly at the window, and, after a single glance at
the form upon the couch, beginning to embroider patiently upon some
work she took from a silken bag. She moved so noiselessly that the
girl did not hear her and for several minutes absolute silence
pervaded the room.