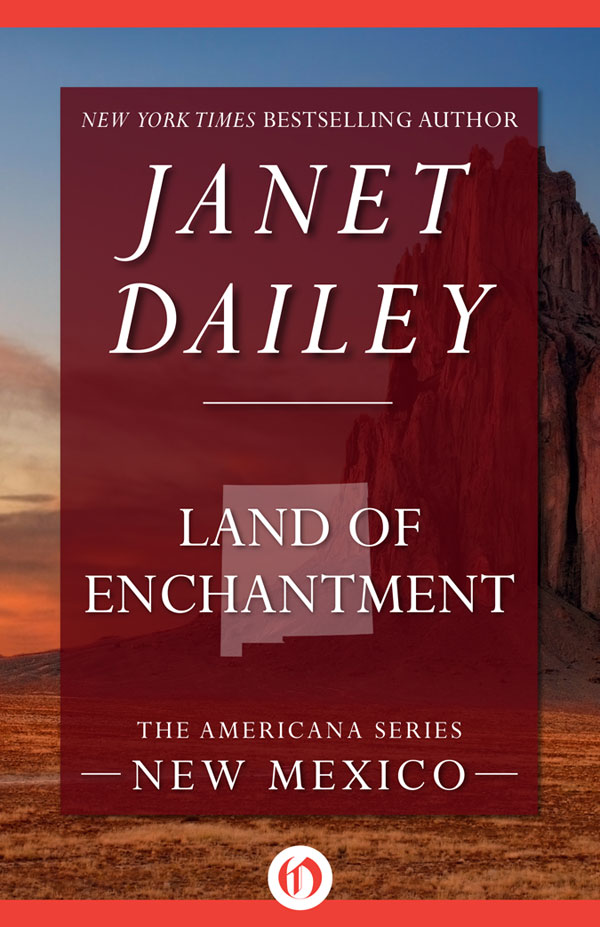 Valley Of the Vapours (Arkansas)

After the Storm (Colorado)

Night Of The Cotillion (Georgia)

The Bride Of The Delta Queen (Louisiana)

A Tradition Of Pride (Mississippi)

One Of The Boys (New Jersey)

Beware Of The Stranger (New York)

The Widow And The Wastrel (Ohio)

To Tell The Truth (Oregon)

The Thawing Of Mara (Pennsylvania)

With A Little Luck (Wisconsin)

For Bitter Or Worse

Introducing JANET DAILEY AMERICANA. Every novel in this collection is your passport to a romantic tour of the United States through time-honored favorites by America's First Lady of romance fiction. Each of the fifty novels is set in a different state, researched by Janet and her husband, Bill. For the Daileys it was an odyssey of discovery. For you, it's the journey of a lifetime.

When I first started writing back in the Seventies, my husband Bill and I were retired and traveling all over the States with our home—a 34' travel trailer—in tow. That's when Bill came up with the great idea of my writing a romance novel set in each one of our fifty states. It was an idea I ultimately accomplished before switching to mainstream fiction and hitting all the international bestseller lists.

As we were preparing to reissue these early titles, I initially planned to update them all—modernize them, so to speak, and bring them into the new high-tech age. Then I realized I couldn't do that successfully any more than I could take a dress from the Seventies and redesign it into one that would look as if it were made yesterday. That's when I saw that the true charm of these novels is their look back on another time and another age. Over the years, they have become historical novels, however recent the history. When you read them yourself, I know you will feel the same.

So, enjoy, and happy reading to all!

I'M out of hair-spray, Diana. Can I borrow some of yours?' Stella hovered behind the blonde-haired girl, taking care not to move her head too much for fear a brunette lock might slip out of place in her elaborate hairstyle.

'There.' Diana pointed to an aerosol can on the table with the end of her eyebrow pencil before returning her concentration to the reflection in her make-up mirror.

Perfect, beautiful features stared serenely back. Large, luminous blue eyes that seldom revealed her inner thoughts were superbly framed by long curling lashes. Their thickness was increased now by the application of artificial eyelashes while a turquoise shade of eyeshadow intensified the colour of her eyes. Her nose was exactly right, not too short, not too straight, not too large. Her lips were proportioned correctly too, with her upper lip forming a perfect cupid's bow, and the lower lip was just enough larger to appear sensuous under the application of layers of lip gloss over the pink-tinted lipstick. She had an oval face and her creamy clear complexion was the envy of all the models. The pale, ivory base make-up seemed wasted since nothing could improve it.

From long experience, Diana added light feathery strokes of the charcoal-grey eyebrow pencil to fill in and accent her finely arched brows. Removing the blue band that had held her silvery blonde hair away from her face, she began briskly brushing the long silken tresses. The ends of her hair curled naturally upwards, including the fringe that she always brushed away from her face. She had been endowed with hair that naturally looked
windblown and was beautifully rumpled when it actually was tossed about by the wind.

The door of the trailer swung open to admit a willowy chestnut-haired girl in a swirl of cool air. She shivered in her halter outfit as she quickly closed the door behind her.

'They're ready for you, Stella,' she announced through chattering teeth.

'Tell them I'll be just a minute,' Stella replied, inspecting her reflection for any last-minute adjustments.

'You tell them. I'm not going out there in that cold again until I have to,' the other girl retorted sharply. 'I'll never get adjusted to wearing summer clothes in the winter. I'll die of pneumonia first!'

'It's not usually this chilly in February, Vanessa,' Diana reminded her.

Vanessa shrugged indifferently at that claim, choosing instead to call after the dark-haired Stella just leaving the trailer, 'Watch where you step or you'll be getting manure all over your shoes!'

Diana hid her smile at that warning, but not in time for the disgruntled Vanessa to miss. She let the glowering look slip by without comment.

'Wait until you get into that white outfit and have to wander around all those cows and horses with Connie shouting at you all the time not to get it dirty,' Vanessa grumbled, slipping out of the brilliant flame-hued halter dress and into her long smock. 'I don't understand how Connie comes up with these hare-brained ideas. Whoever heard of clothes being photographed at a rodeo? It's positively ridiculous!'

'It is not ridiculous. It's a perfect background for this particular design blending Western and Indian with modern styles. What better place to do that than San Antonio and their annual rodeo?' Diana reasoned, glancing away from the mirror long enough to see the thawing in Vanessa's face.

'Well, I win admit one thing. I've never seen so many good-looking, rugged he-men in one place before,' the other girl relented. 'And they aren't bashful about making their admiration known.' Vanessa smiled at herself in the mirror. 'I don't know when I've had so many whistles, winks, and invitations from the male sex.'

'Don't let it go to your head,' Diana warned. 'You'll never meet a more footloose and roving bunch of men than these rodeo riders. They've got to be the land equivalent
of the proverbial sailor with a girl in every port.'

'You're always such a spoilsport.' Vanessa shook her head sadly at the blonde girl methodically brushing her hair until it glistened and crackled. 'Not every guy you go out with has to be the one you marry. There is such a thing as a fun date, you know. And I bet these cowboys can really swing!'

'You can have all the swingers as far as I'm concerned.' Diana put the brush on to the little table and fluffed the ends of her hair with her hands. 'You just point me to a nine-to-five-man with a little home in the suburbs and I'll be happy.'

'No one who's as domestically minded as you are should have been born with such looks. You're a disgrace to the modelling profession!'

'Don't be ridiculous!' Diana laughed. 'I bet you sit home alone at night just as often as I do. You have to or you wouldn't get enough sleep to keep those circles from clinging under your eyes or those inches from being added to your waistline from all the food and liquor.'

'Being a model does have its limitations,' Vanessa admitted reluctantly. 'But that's just because we're here in Texas where the Miss-America look is idolized. New York is a different story.'

'Pooh!' Diana shook her head. 'Dallas models are not any different from any high-fashion models you want to name. The work is-just as hard and demanding and not at all glamorous, as anywhere else, whether you're modelling clothes in a store or for a photographer as we do. And it's certainly not one big swinging party in any part of the country!'

'It does have prestige.'

'I'd sooner have the prestige of being a wife and mother,' Diana retorted, walking over to take the white jumpsuit off its hanger.

'Not me. I don't want some kid spoiling my figure.'

Diana winced at that, the unfeeling statement hitting a wound that had never healed. But it was something she never discussed with anyone, mostly because there had never been anyone who had ever been close enough for her to confide in. She hid her loneliness behind the serene mask of beautiful composure and no one guessed it was there.

'Di, honey, what you need to do is go out a little more. It's about time you found out that there's more to life than marriage and kids.'

Laughter rolled out easily at that superior remark. 'You say it as though all I have to do is snap my fingers and I'll have a string of admirers standing at my door,' Diana replied. 'Do you know why I sat at home by myself on New Year's Eve? Because nobody asked me out. Everyone assumed that I was invited somewhere else. The nice guys in this world figure that a beautiful girl has all kinds of men ready and willing to date her, so they don't want to join the throng. Girls like you and me end up attracting the duds, the ones who need their images and egos boosted by being seen with a beautiful woman on their arm. They don't care anything about us as individuals.'