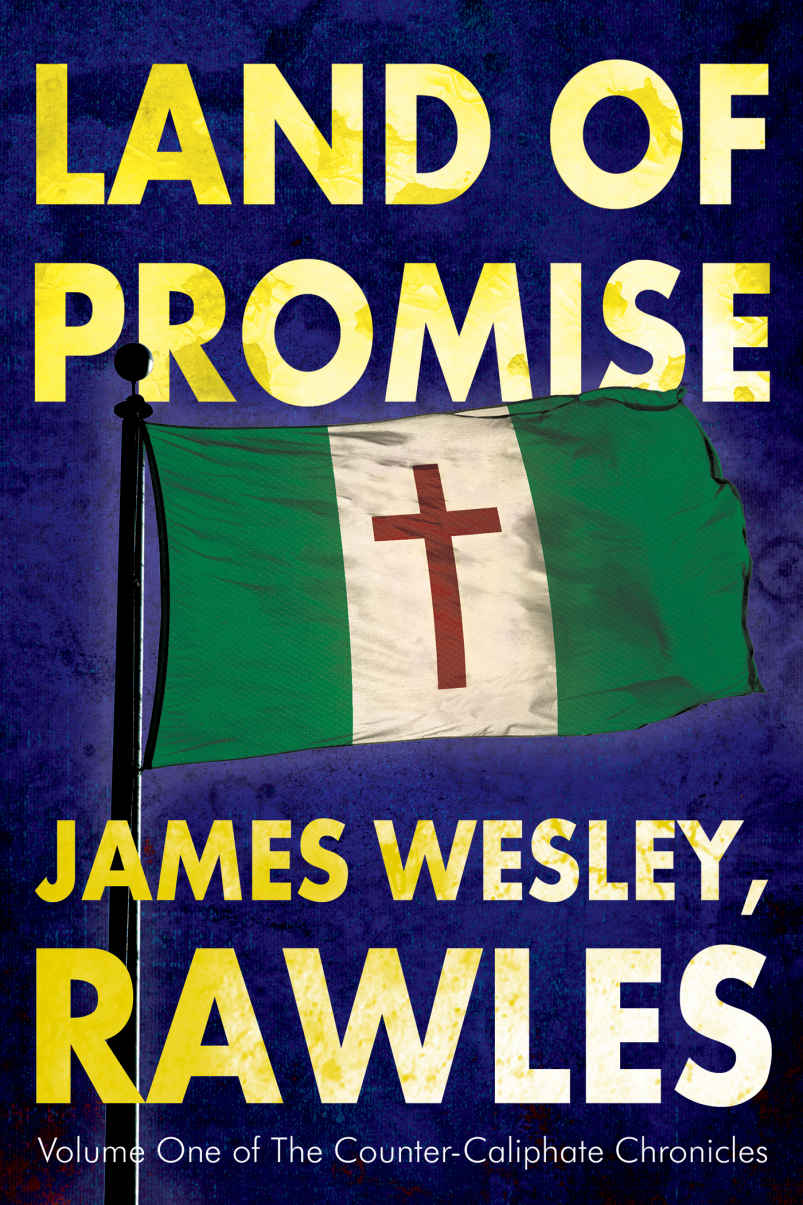 Volume One of The Counter-Caliphate Chronicles

eBooks are not transferable. They cannot be sold, shared or given away as it is an infringement on the copyright of this work. No part of this book may be reproduced or transmitted in any form or by any means, graphic, electronic, or mechanical, including photocopying, recording, taping, or by any information storage or retrieval system, without the written permission of the publisher.

Chapter 10: Eagle of the Alps

Chapter 26: The Tip of the Spear

This is a work of fiction that takes place in the future. All of the events and characters described are imaginary; any resemblance to living people is coincidental. All Rights Reserved. Any unauthorized duplication in whole or in part or dissemination of this edition by any means (including but not limited to photocopying, electronic bulletin boards, and the Internet) will be prosecuted to the fullest extent of the law. This is a work of
fiction
. All events described are imaginary, taking place
three decades
in the future
, and thus do not represent the world as we know it in the present day. It does not reflect the current geopolitical situation, governmental policies, or the strategic posture of any nation or organized religion. This novel is not intended to be predictive of their territorial aspirations, tactics, or planned use of terrorist tactics. Again, it takes place
in the future
, under
fictional
new leadership. Any resemblance to living people and current organizations is purely coincidental. The making and/or possession of the some of the devices and mixtures described in this novel are possibly illegal in some jurisdictions. Even the mere possession of the uncombined components might be construed as criminal intent. Consult your State and local laws! If you make any of these devices and/or formulations, you accept sole responsibility for their possession and use. You are also responsible for your own stupidity and/or carelessness. This information is intended to add realism to a work of fiction: The purpose of this novel is to entertain and to educate. The author and publisher shall have neither liability nor responsibility to any Citizen, person, or entity with respect to any loss or damage caused or alleged to be caused, directly or indirectly, by the information contained in this novel.

Jim Rawles and I both hail from military backgrounds as former U.S. Army Military Intelligence officers and trailblazed to libertarianism, although our journeys ended at different destinations. We both also happened to live fairly near each in the Inland Northwest but most frequently crossed paths at gun shows.

Jim single-handedly bootstrapped and professionalized the world of survival blogging with his pioneering efforts at
SurvivalBlog.com
in the wee years of the new century. He has written seven books, and his craft improves with every one. Jim is the inspiration and one of the prime movers behind the American Redoubt effort to create a critical mass of freedom in the United States in the Inland Northwest. To quote Jim: “In effect, we’re becoming pistol-packing Amish.”

This book is a blueprint for a future that diverts mightily from the historical trend line for the past few millennia. It seeks to reimagine a liberty revolution that puts individuals in the driver’s seat and tries to harness and limit government as much as possible. I’ve written extensively on why I think both American revolutions in 1775 and 1861 respectively were abysmal failures in delivering the individual freedom that Jim tries to flesh out in this book.

Secession, devolution, and imperial dissolution are the rule and not the exception in human history -- especially in the West. Western history is littered with defunct empires and sundered nation-states. All of these are incubators for the next generation of government to take its place. Jim is providing a road map here, a how-to manual on a method to craft the limited government framework -- and a ripping good yarn.

Full disclosure: I am a zero-government abolitionist (hence the name of my blog), but I support any effort to stem the collectivist tide, and I am willing to hear Jim out. I’m honored that Jim asked me to pen this Introduction. I’ve read a galley proof of the novel and loved the heart and soul animating the idea. The notion of the nation-state is public enemy number one to anyone who cherishes and wishes to preserve any semblance of individual liberty and freedom not assimilated into the collectivist organism known as the state.

While I remain skeptical of any government ability to remain limited, I am happy to entertain any new notions that come down the pike. This is one of those.

Jim crafts an intriguing idea: Peacefully negotiate and carve a small section of unwanted land in Africa for political émigrés and refugees, and see what one can sow with the notion of creating a system where all
initiated
violence is forbidden, and self-defense from any aggression is encouraged. Let’s remember that murder begins where self-defense ends and that the Ten Commandments, that ingeniously simple and elegant set of principles on which such a country may be based, forbade murder and not killing. Imagine a country crafted along Christian principles that hearken more closely to the Articles of Confederation than to the Constitution. This book speaks to that.

Jim has mentioned that this is the first of a multi-novel series. He crafts a stage here pregnant with dramatic possibility that illuminates a possible future for those despondent over the trajectory of the world they live in. While not an homage to Robert Heinlein’s
The Moon is a Harsh Mistress
, Jim’s novel
Land of Promise
riffs and syncopates on many of Heinlein’s themes -- government fatigue, increasing surveillance-state nonsense, the narrowing of the ability to be left alone, and the worst malefactor of all: the tremendous rippling of unintended consequences, bad judgment, and sheer idiocy of big government causing an increasing cascade of the same. And herein may lay the fatal conceit of the leviathan state. Even to the most casual observer of all things government, one notices the large and small glaring examples of malfeasance and naked incompetence. While I think most conspiracy is more correlative than causative, if given a choice between incompetence and conspiracy for government ineptitude, I will champion the former every time.

Unlike Jim’s
Patriots
novels which take place in a world collapsed and destroyed, the motifs for this series will be (a) opting out of the strangling embrace of totalitarianism globally and (b) how a fledging nation picks itself up by its bootstraps and initiates liberty in its own modest way.

I love Jim’s attention to detail in building this imaginary country. While certainly not the creation of an entirely different landscape and universe like Tolkien or Martin, he does dare to ask the right questions about the present paradigm of the state and how its monstrous march against humanity can be checked. A burgeoning sub-genre in novels and novellas that one may call post-apocalyptic has gotten significant legs since the beginning of the new millennium. While some are good reads, and one has to be careful to separate the wheat from the chaff, rarely are these prescriptive and proactive. They usually describe the reactions of all the characters in their arcs as they contend with the emerging unpleasantries of the new world. In
Land of Promise
, however, Jim crafts an exception to the rule: He speculates on proactive efforts to carve out a liberty lifeboat on Earth. It is the last refuge of free people in charge of their own lives. In every other place on Earth that man has put down roots, the usual suspects come out of the woodwork to offer advice on how to run his life and eventually develop systems that strangle that very life out of them. Some of these have been much worse than others as witnessed in the blood-soaked twentieth century.

Grok that for a minute. Outside the confines of places like Zomia in Southeast Asia, a state-repellant part of the globe, humans are more so than not corralled onto tax plantations with varying degrees of “freedom” in fascist or socialist combines: The fascist model regulates all economic behavior through taxation and regulation with severely punitive measures against those who refuse to comply or evade the system; the socialist and communist models are more honest in their exploitation by rendering private property conditional on government approval. These collectivist models have one thing in common: No one can opt out of the system voluntarily without facing considerable violence from the state. If one doubts this in America, consider the consequences of refusing to stop for the flashing lights of the statist police in your rear-view mirror or refusing to pay your taxes at any level. Then you’ll discover just how problematically fragile your liberty is right now.

These are just some of the inspirations for Jim’s advocacy for the American Redoubt, and I suspect that he is crafting this novel as a proof-house of some of the means to get there.

I also believe Jim is inspired by the soul-cleansing the desert provides, since his new country in Africa is a rather desolate piece of topography. Many of us remember that scene in
Lawrence of Arabia
where Lord Feisal pegs Lieutenant Lawrence as one of those visionaries, those lovers of desolate places. The same Lawrence would tell us, “All men dream but not equally. Those that dream by night in the dusty recesses of their minds wake in the day to find that it was vanity; but the dreamers of the day are dangerous men, for they may act their dream with open eyes to make it possible.” These are the practical visionaries, the men who put shoulder to philosophical wheel and make the Earth move. But then again, individual volition and innovation
can
make the most desolate place on Earth blossom and be fruitful through the magic of self-interested volition harnessed to a desire to be in command of your own life.

(
Bill Buppert
is a former U.S. Army Intelligence officer. Most recently, he has been a military intelligence contractor working in Southwest Asia. He is the author of
ZeroGov: Limited Government, Unicorns and Other Mythological Creatures
. He blogs at
ZeroGov.com
.)

All About the Bear (Grizzly Cove Book 1) by Bianca D'Arc
Sinai Tapestry by Edward Whittemore
Briar Rose by Jana Oliver
Suze Orman's Action Plan by Suze Orman
Outlaw's Baby: A Bad Boy Secret Baby Romance by Marci Fawn
Anton and Cecil, Book 2 by Lisa Martin
Death of a Mystery Writer by Robert Barnard
Acts of Desperation by Emerson Shaw
Ever Onward by Wayne Mee
Far In The Wilds by Raybourn, Deanna
Our partner