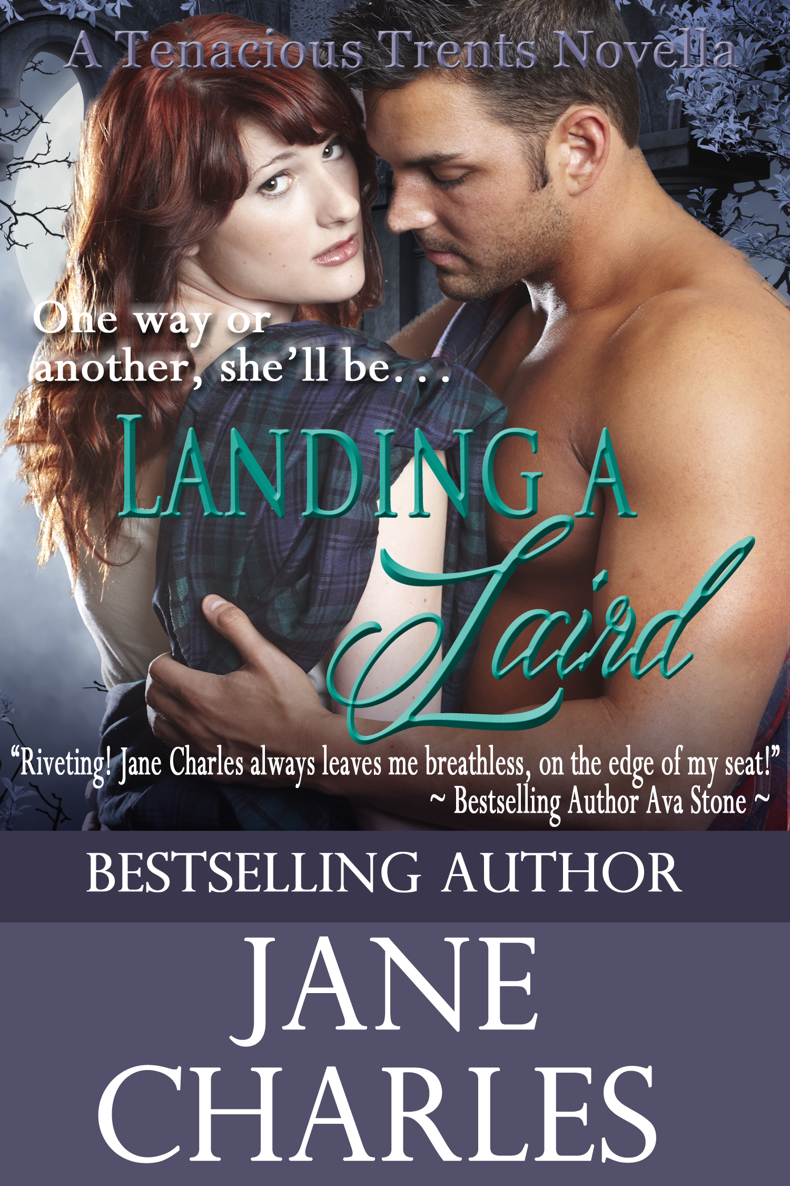 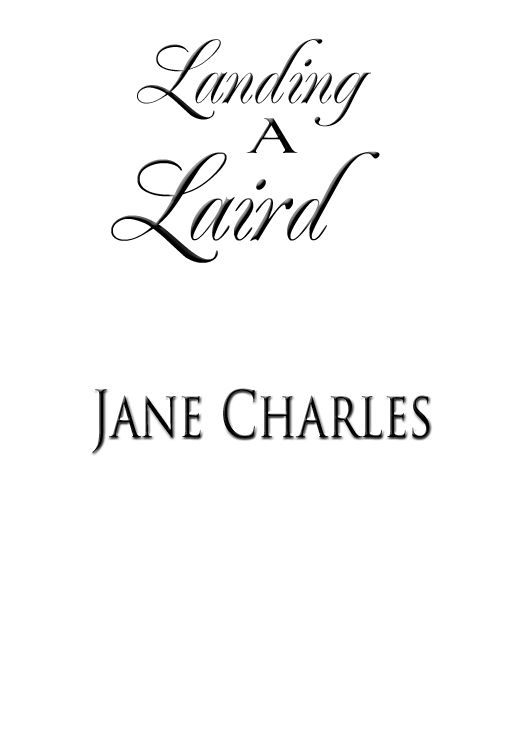 This ebook is licensed for your personal enjoyment only. This ebook may not be re-sold or given away to other people. If you would like to share this book with another person, please purchase an additional copy for each recipient. If you’re reading this book and did not purchase it, or it was not purchased for your use only, then please return and purchase your own copy. Thank you for respecting the hard work of the author.

Landing a Laird
, a novella, first appeared in anthology,

The Betting Season.
It
later appeared in a compilation,

Scots, Spies and Salacious Lies
.  While it is not technically a
Tenacious Trents
novella, one is present in this story.

If reading the Tenacious Trent series in order,
Landing a Laird
, took place between
Compromised for Christmas
and
A Misguided Lord
.

Lady Moira Kirkwood stretched her arms above her head, opened her eyes, and immediately sat up.  “Goodness, what time is it?”

Beatrice, her maid, popped her head out of the dressing room.  “It is close to noon, Lady Moira, but I am not surprised you slept so late, last night being your first ball and all.”

If Moira hadn’t insisted Beatrice not wait up for her, the maid would have known she hadn’t been out until the wee morning hours, but that was not the case.

In fact, she’d barely made an appearance at the Heathfields’ ball before her mother determined it was time to leave.  The only friend she had seen was her dear friend, Pippa, Lady Philippa Casemore, and that was from across the vast ballroom. They’d shared a quick wave before her mother had pulled her away.   Once the introductions were out of the way, Moira hoped to find Miss Patience Findley and join Pippa, who seemed to be having a grand time, but her mother insisted on leaving.

“
It adds mystery,” Mother had insisted.

Mystery
?  “This is my first ball. May I at least stay long enough for one dance?”

And that was it.  An hour after they walked through the door, they were walking back out.  Upon arriving home, her mother sent her to bed for a good night’s rest so that she wouldn’t develop wrinkles or bags or circles under her eyes, and to consider the gentlemen she had met that night.

Instead of doing as she was told, which Moira rarely did, she made a list of the few eligible men that had made her acquaintance that evening.  There had to be at least one Scotsman, with an estate close to Edinburgh, preferably. The Highlands would never do because they were far too remote. One must have access to a good modiste, a lending library, and a haberdashery if one was to survive so far away from friends and family.

Moira rose from her bed, walked to her desk, and picked up the list she had penned before falling asleep.  There were only five names, and none of them sounded even remotely Scottish.  If her mother was going to limit her time at balls to only an hour, Moira needed a new plan.

“
The light blue will look lovely on you.”

Moira glanced at the walking dress Beatrice laid out on the bed.
Walking dress
.  She was to meet Pippa at the entrance of Hyde Park today.  Moira glanced at the clock again. She still had two hours until their appointment.  At least Pippa would have stayed for the entire night and probably had a wonderful time. Moira couldn’t wait to hear the stories. Oh, why couldn’t she have an old, lax guardian instead of her mother?

A scratch at the door drew Moira’s attention.  “Come.”

Mary, another maid, popped her head inside the chambers. “Lord and Lady Hearne to see you, Lady Moira.”

“
Tell them I will be right down.”  Why were her brother and sister-in-law here?  “And have tea and cakes delivered. Lots of cakes, please.”  Her stomach grumbled.  Normally, she would have had her morning meal before now.

Moira rushed through her toilette, without allowing Beatrice to do much with her hair except brush and to pin it back before rushing to meet her brother and sister-in-law.  Nyle and Alvina had been at the Heathfields’. Perhaps they would have stories to tell.

“
Moira Kirkwood, ladies do
not
run down stairs. They do
not
appear below stairs without their hair being arranged and their clothing properly attired.”

She skidded to a halt, her slippers carrying her a few extra feet on the marble floor, the moment she heard her mother’s voice.  Moira glanced down at her gown. It was precisely what she’d planned on wearing to meet Pippa later that day.  Oh, she so hated changing clothing three, four, five times a day.  It was a terrible waste of time when one could be reading, shopping or simply enjoying a glorious day.

She turned to face the woman who was the bane of her existence.  “Alvina and Nyle are here. I wished to see them and they don’t care how I’m dressed.”

Her mother reached the foyer and raised an eyebrow. “What of other callers?  They will care.”

Moira suppressed a sigh.  “There are no other callers, Mother, nor do I expect there to be any.”

“
Of course there will be callers,” her mother insisted.  “You made quite an impression last evening. I expect they will be arriving within the hour.”

How did one make an impression when barely a few words were spoken and her outing had only lasted all of sixty minutes in a room full of at least one hundred people?  Her mother was daft.

“
Go upstairs and change into a morning gown, and have Beatrice do something with that hair of yours. Then you may visit with your brother and that wife of his.”

Moira resisted the urge to roll her eyes, but she turned to do as her mother bade.  Thank goodness Beatrice had a talent for arranging hair, and in short order.

“
Explain to me why you would allow, encourage, or otherwise be compromised by Miss Moira Kirkwood?”  Gideon Waite, Viscount Ainsely, asked his former school mate who he happened to run into when he entered White’s.

“
I haven’t the foggiest. I’ve never even met the chit.” Peter Radburn, Marquess Lydell leaned back in his chair.  “And can a lady even compromise a gentleman?  Isn’t it usually the other way around?”

“
Of course they can,” Gideon chuckled. “It happens all the time.  Except, we call it
trapped
.  She encourages a stolen kiss in the moonlight, her father appears, and bachelorhood comes to an end.”

“
I suppose so.” Lydell shrugged.

Mr. Jordan Trent pulled out a chair and joined the men at their table.  He signaled for the footman and ordered a brandy before he focused on Lydell. “About this bet…”

“
I know nothing about it.”  Lydell threw his hands up in defense.

Gideon laughed.  Lydell was rather private and the more he tried to go unnoticed, the more society gossiped about him.  Of course, it didn’t help that less than a sennight ago all of London learned Lydell needed to find an heiress before the Season was done.

Both Gideon and Lydell leaned forward.

“
Go on,” Lydell prompted when Jordan paused to take a drink from the glass just set before him.

Jordan glanced at Gideon. “I should have known those two would make an issue of the young woman’s words.”

“
Jordan,” Lydell warned, running out of patience.  Gideon had seen these two in similar conversations over the last ten years.  The more Lydell wanted to know something, the longer Jordan took in the telling.

Highland Fire (Guardians of the Stone) by Crosby, Tanya Anne
From the Kingdom of Memory by Elie Wiesel
Timeless Mist by Terisa Wilcox
The Goddess Rules by Clare Naylor
A Cry at Midnight by Chancellor, Victoria
Seasoned with Grace by Nigeria Lockley
Torchwood: Slow Decay by Andy Lane
El susurro del diablo by Miyuki Miyabe
The Secret Keeper by Kate Morton
You are Mine by Lisa G Riley
Our partner