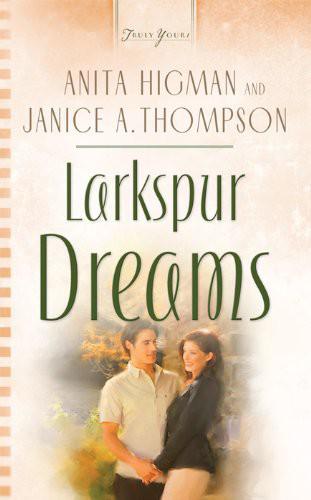 Copyright © 2007 by Anita Higman and Janice A. Thompson. All rights reserved. Except
for use in any review, the reproduction or utilization of this work in whole
or in part in any form by any electronic, mechanical, or other means,
now known or hereafter invented, is forbidden without the permission of
Truly Yours, an imprint of Barbour Publishing, Inc., PO Box
721,
Uhrichsville, Ohio 44683.

All scripture quotations, unless otherwise indicated, are taken from the Holy Bible, New International Version®. niv®. Copyright © 1973, 1978, 1984 by International Bible Society. Used by permission of Zondervan. All rights reserved.

All of the characters and events in this book are fictitious. Any resemblance to actual persons, living or dead, or to actual events is purely coincidental.

PRINTED IN THE UNITED STATES.

What a scene!
Lark sat in her Hummer. The move-in day of her rich neighbor certainly had a sitcom quality to it. She leaned in to watch him. Mr. New Guy gestured to the movers about his leather furniture, but they held to their standard
modus operandi
—the heave-ho method. And Lark could tell her dear, old friend, Skelly Piper, had the new guy cornered with his zucchini brownies and the highlights of his hernia operation.

Is that truly a pair of boxers flying up in the breeze?
Apparently they had blown out from an open carton and were doubling as a kite. The offending object finally landed in a tree and began flapping like a white flag.
So how does a guy look manly while retrieving unmentionables from a blue spruce?

Just as Lark was about to find out, her eyes followed a new addition to the bedlam.
Oh, no. Not Picasso!
Her pet duck had yet to be approved by the planning commission, and he was waddling about on her new neighbor’s walkway being loose in more than one sense of the word.

I’d better go help Mr. New Guy out.
She rolled the window down and let her Christian rock music soar free into the air. With her brightest smile, she waved to her new neighbor. Skelly Piper saluted back, but Mr. New Guy sported a croaking sort of smirk that seemed to be directed at her.

Lark cut the engine and strode over to the two men. “Hi.” She hugged Skelly as he said his good-byes.

“Oh, and see ya at the fall festival, kiddo.” Skelly shuffled off, bowlegged. His thick hair stuck up on his head like a clump of silver grass. But he had his usual warm smile as he glanced back at her.

Turning to her new neighbor, Lark couldn’t help but notice God had been quite charitable with his appearance. He had a striking presence with his hazel eyes, short brown locks, and a “surely he must lift weights” kind of build.
Hmm. Early to mid-thirties, same as me. Same medium height. But who wears a suit to move in?
And his tie looked like it would work equally well as a tourniquet. Lark also took note that Mr. New Guy held the bow on the sack of brownies as if he were holding the tail of a dead skunk.

Lark extended her hand to welcome him. “I’m Larkspur Wendell, your next-door neighbor.”

“I’m Everett Holden III,” he said like a maitre d’ with an attitude. He slipped his Palm Pilot into his suit pocket and shook her hand.

The word
mannequin
popped into Lark’s head, but his fingers and gaze lingered a moment longer than she expected.

One of the movers sneezed loudly, and all at once the assessing moment dissipated. They quickly freed each other’s hand.

Everett looked down at his ultra-polished wingtips.

Lark wondered if he could use them for rearview mirrors. Picasso toddled over to her. “And who let you out?” She shook her finger at the duck as he dipped his head in shame.

“You actually
own
that flying outhouse?” Everett asked without a speck of humor.

“I’m sorry he left a bunch of his. . .doodling artistry all over your walkway. But you know, he doesn’t usually get
out. Perhaps someone
let
him out.”

Everett straightened his already immovable posture. “Well,
I
certainly didn’t do it.”

A belch reverberated out of one of the movers. She tucked her giggle away, folded her arms, and nodded in the direction of the two guys lugging a couch up the steep steps to the house. “I rest my case.”

“Okay,” Everett said. “Mutt and Jeff over there might have accidentally done it since our gates are next to each other, but generally you
do
keep that thing penned up, right?” His brows furrowed a bit.

“I assure you, Picasso’s not been trained as an attack duck.” Lark could barely hold back her mirth. She took a treat out of her pants pocket and tossed it to Picasso. He rewarded her with a few happy mutterings.

“So do you run a game preserve back there?” Everett asked.

“No. Just one sweet, little mallard that thinks I’m his momma.” His face grasped her attention. “And what do you do, Mr. Everett Holden III?”
I can’t wait to see what this amazingly uptight guy is going to say next.

Everett smiled as if it were a new expression he was trying out. “I’m an accountant, and I’m going to work out of my home. I spend most of the day behind the computer, but it suits me. I like quiet. Well, actually, I require it.” He raised his head and made a little sniffing noise.

Lark tried to smooth the folds of her angora sweater. She gave up and looked over at Everett’s gingerbread cottage. She couldn’t imagine him buying such a dainty, rosy-colored house. “You certainly bought a pretty place to live.”

He glanced at his home and then nodded. “It should be an excellent investment.”

Lark waited for him to say more, but he just stared at his house. Many homes in the neighborhood were Victorian with pocket gardens, but she also loved the charm of the whole town with its galleries, trolleys, and quaint shops. For now, though, she couldn’t help wondering if her new neighbor had also been captivated by the delight of Eureka Springs.

Everett tapped his shoe against a rock.

Okay, it’s time for me to leave.
“I’ve kept you too long. I’m so sorry.” She turned to go. “By the way, we all have get-togethers around the holidays.”

Surely Everett hadn’t forgotten Thanksgiving would be arriving in just a few weeks. “You know, Thanksgiving and Christmas?” Lark said.

Everett shifted his weight as if he were losing patience. “I realize
what
holidays. I’m just not used to spending them with anyone.”

Lark could feel her mouth gape open. What could she possibly say in response to that? She looked back at Everett. “Oh, but to spend Christmas alone sounds so. . .I mean. . . wouldn’t it be lonesome?”

“I don’t know. I’ve not spent a lot of time thinking about it.” Everett straightened the sleeve of his suit, making Picasso think he had a treat. As her duck waddled toward his shoes, Everett took a conspicuous step away.

“I always have guests over around Thanksgiving, so I hope you’ll be one of them.”

Everett looked up at the sky as if he were expecting bad weather. “I really hate to obligate myself right away. But thank you.”

What a peculiar response.
“You’re welcome,” Lark said. “By the way, you’ll enjoy your new neighbors. They’re down-to-earth, generous, and practically like family.”

“That’s nice. By the way, do you mind?” Everett pointed at Picasso’s handiwork. “You know, hosing that off my walkway?”

Lark jolted back from her reverie. “Oh, yes. I’ll clean it up.”

Lark turned to leave, but when she heard the pounding of piano keys, she glanced back. The movers lifted an old, high back piano down from the truck. “Do you play?”

Lark motioned toward the instrument. “The piano. Do you play?”

“No. I don’t.” His frosty countenance softened, giving him a boylike appearance. “It was my mother’s.”

“Well, it’s a pity. With some lessons I’ll bet you could make it come to life.”

“I don’t think I have enough aptitude.”

“All you need is the passion. Then everything else falls into place. . .like colors on a canvas.” She wondered if the piano made him nostalgic. She could tell he had a smile aching to be released. A good sign. It meant Everett had a warm, beating heart under his cool, starched veneer, and a handsome man with heart would make good cocoa-sharing company on a cold evening.

Lark wiggled her fingers in a wave and headed toward her backyard gate, which she could see had indeed been left ajar. Without any commands, Picasso followed Lark. She sang to him softly as he waddled next to her along the limestone path. Before shutting the latch, Lark glanced toward Everett. He’d been caught gazing at her. Why did his interest give her so much pleasure?

Quickly Everett turned away and headed toward the delights of Mutt and Jeff.

“Well, what do you think of our new neighbor?” she whispered to her duck. “I think he reminds me of my old university professor, Dr. Norton.” Picasso paused to look up at her and then toddled on his way with his tail feathers wagging. Lark recalled her professor had craved such a private life he eventually left his career. In fact, he’d become so withdrawn, one by one everyone left him to his lonely existence. “We’ll watch out for our new neighbor, won’t we, little fellow?” Picasso continued to have nothing to say on the subject, so she secured him in his large habitat and blew a kiss in his direction.

A gust of crisp, autumn air turned Lark’s mind to the church’s fall festival. She wished she’d remembered to invite Everett. She could tell he needed to get out.
Maybe I can ask him later.

Lark scooted into her old tire swing and gazed up at the cornflower blue heavens.
Such a nice color, God.
She shoved off toward the sky.

Just as Lark wrapped up her prayer, she realized she’d reached the highest point she’d ever gone in her swing. She felt suspended in midair like a cloud. As if the day had stopped just for her to enjoy a moment longer. Lark slowed her speed and then locked her arms to let her body drift low. She’d always loved swinging that way when she was growing up. Her parents did, too. Right alongside her.

Hum by Ann Lauterbach
The Serpent's Tale by Ariana Franklin
Stowaway by Emma Bennett
Hall of Secrets (A Benedict Hall Novel) by Cate Campbell
The Turning: A Tale of the Living Dead by Hudson, Kelly M.
Skin Walkers Conn by Susan A. Bliler
The Regal Rules for Girls by Fine, Jerramy
Inner Diva by Laurie Larsen
Send Me An Angel by Ellis, alysha
Sad Love by MJ Fields
Our partner