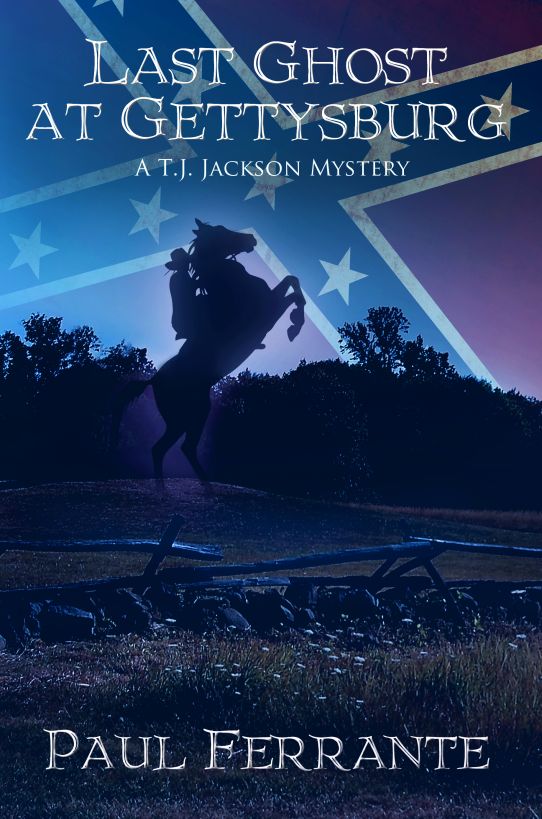 Names, characters, and incidents depicted in this
book are products of the author’s imagination or are used
fictitiously. Any resemblance to actual events, locales,
organizations, or persons, living or dead, is entirely coincidental
and beyond the intent of the author or the publisher. No part of
this book may be reproduced or transmitted in any form or by any
means, electronic or mechanical, including photocopying, recording,
or by any information storage and retrieval system, without
permission in writing from the publisher.

For Maria
who believed
And Caroline
who dreams

Special thanks to Alice Zapf, Mohit Mathur
and Michaela Maccoll for their assistance in the publication
process; the park rangers of Gettysburg, PA for their cheerful help
on my many visits; the kind curators at the Confederate Museum in
Charleston, SC; the proprietors of the many Gettysburg shops I
visited for their information about reenacting and equipment; the
many dedicated Civil War reenactors I interviewed during my various
trips, and my editor at Fire & Ice, Denise Meinstad, for her
guidance.

High school freshman T.J. Jackson thinks his
summer will be a drag when his widowed dad dumps him off for a
vacation with his Uncle Mike, a park ranger at the Gettysburg
National Battlefield, Aunt Terri, and his geeky adopted cousin
LouAnne.

But T.J. is in for a few surprises. For
starters, Gettysburg isn't the boring Civil War town he expected. A
ghostly Confederate cavalier has been terrorizing nightly visitors
to the battlefield. And LouAnne isn't so geeky anymore—she's become
a sassy beauty who leaves him breathless.

Things escalate when the cousins, aided by
T.J.'s quirky friend Bortnicker from back home in Connecticut—who
also has his eye on the lovely LouAnne—attempt to solve a murder
mystery that has the local police, park rangers and paranormal
investigators in a panic. Because how do you stop an undead killer
from 1863 from wreaking havoc in the 21st Century?

It was dark in the cemetery, especially when
the full moon ducked behind the gray, patchy, late-spring clouds.
Storm clouds. But Lenny Moziak and Brian Murphy didn’t mind in the
least. No, although it was past midnight and the cemetery had been
officially closed since dusk, they were deep within the labyrinth
of tombstones that constituted the national burial ground, removed
from any interference by patrolling police or park rangers. Markers
and monuments were everywhere, from elaborate angels and crosses to
simple marble and granite obelisks to white squares marked
“unknown” set in the finely manicured turf in sweeping
semicircles. And of course, there were the cannon and military
plaques that noted the spots from which artillery gunners had sent
cannonballs soaring into Confederate infantrymen on Day Three.

A weird place for a party. But that just made
it funkier for these midnight ramblers, who’d just seen their first
year—a complete disaster—end at Gettysburg College. Although they
would probably be thrown out when report cards came back, Lenny and
Brian were in a festive mood. The plan was to pack up Murph’s old
van and boogie down to Florida for a few weeks of R&R and then
play it by ear. Like everything the boys did, it was Lenny’s idea.
Murph was little more than his wingman, but happily accepted his
role. Tonight was a night for kicking back and mapping it out—and
for getting stinking drunk.

“I must say, Murph, we’ve got style,” giggled
Lenny as he swigged from a bottle of Jack Daniels. “On this
hallowed ground, which has spawned the institution from which we
are flunking, we do find this truth to be self-evident: Every man
has the God-given right to party hearty!”

Lenny handed the bottle to Brian, who drank
deeply. He looked around, shaking his head. “Lotta residents here,
man.”

“Yeah,” replied Murph, running a hand through
his shoulder-length kinky hair. “And d’ya know what the spooky
thing is? Nobody even knows who a lot of ‘em are. Lookit this one
here.” He pointed to a marker between his outstretched legs.
“‘Unknown.’ That’s it, man. Great way to end up. A brick in the
ground. Not me, man, no way. If the Prez doesn’t end this war in
Afghanistan, I’m booking. Canada, Mexico, it don’t matter. I’m
history.”

“I concur.” Lenny nodded, his blond ponytail
bobbing behind him. “Hey, how are we stocked for beverages?”

“Enough to get us down to Daytona, son.”

They passed the bottle back and forth,
occasionally emitting a loud belch. Time passed. 12:45 A.M. became
1:30 A.M.

Murph was draining the last of the amber
liquid when he heard–or felt—a pounding noise. Far off. Rhythmic.
It lasted fifteen seconds, twenty seconds then stopped. Their gazes
met.

“That sound. You mean you didn’t hear
it?”

“No.” But he had heard. Murph could tell.

“C’mon, Murph, let me finish this cigarette,
at least. Just keep quiet. It’s only police or park rangers
patrolling, and we’re a ways from any of the paths. They won’t
drive in here.”

Hoof beats. Strong, then fading out. Then
coming closer. Borne on the wind that blew the clouds which
obscured the moon, blacking out the cemetery. Although the revelers
were only a few feet apart, the glowing ember of Lenny’s cigarette
was the only visible thing in the area.

“You there, compadre?” Murph’s voice was a
little shaky now.

“Yeah. I think we’ve partaken a bit too
deeply of the demon rum.” He was speaking in a dramatic baritone
but it was a weak attempt at humor. He was scared stiff. “How far
to the van, Murph?”

“About a hundred yards away, near the
cemetery entrance. Man, it’s dark.”

“Well,” said Lenny, starting to push himself
upright, “I say it’s about time we ease on down the road and—”

“Halt!” A voice, no more than a few feet
away. Guttural. Threatening. “Who goes there?”

All Lenny could manage was a feeble, “What
the—” That was when the smell hit him, a sweetly putrid stench
carried on the wind that brought him back to a childhood incident,
the time he’d found a dead squirrel in the hollow of the big oak
tree in his backyard. It was in the advanced stages of decay,
crawling with maggots. Lenny, who not for a few years would adopt
his angry cynicism and general disregard for life, had begun to cry
for the poor dead animal. A sudden flash came to him, jolted him
back. It was the image of himself decaying, the whitish slugs
roiling within his flesh. He squinted, hard, but could see no
one.

“State your name and regiment.” The voice,
distinctly Southern, directly in front of them now.

“Sit down and identify yourselves!”

The two boys plopped down immediately, like
they’d fallen through a trap door. Then the clouds parted and they
were struck rock-rigid.

The man, or apparition, loomed over them,
bathed in moonlight. He stood at least six feet in his knee-high
black boots, which were mud-spattered and spurred. Though his
uniform was gray it appeared off-white in the moon glow. The
breeches he wore had a smart yellow stripe down the side; the
tunic, with two rows of vertical brass buttons across the chest,
was nothing short of beautiful. Stained white gauntlets led to
gold braid, which curled up his forearms to the elbows. The high
collar displayed a gold star. A saber hung from his thick leather
belt, its scabbard inlaid with intricate designs. But two things in
particular stood out, riveting the boys’ attention.

The first was the man’s face, framed by
shoulder-length black ringlets of hair. His beard and mustache were
well-trimmed and highlighted striking, almost feminine features.
The eyes, though, those eyes! They bore into the young men, black
and hard and intense. The plumed black slouch hat that failed to
obscure them seemed out of place. In fact, the entire uniform was
almost comically theatrical—but the eyes made it all credible. The
other thing that made it credible was the pistol.

Held at arm’s length, it was no more than two
feet from the teens. To Murph, it seemed like a cannon, and indeed,
the Colt .44 was a formidable weapon. Nearly a foot long, this 1860
army piece, standard cavalry issue, was deadly at close range, and
though Lenny and Brian knew nothing about firearms, they did know
they were in deep trouble.

Lenny tried desperately to down-shift his
addled mind out of overdrive and get them out of this mess.
This...person had confronted them, gun in hand, gold braid all
over...Southern accent... Hey, he had no more right being there
than they did, but why did he seem like he belonged? Oh man, why
did they have to come here? They weren’t supposed to be in the park
after dark and this maniac was gonna make them regret it. He
cleared his throat and croaked, “We don’t want no trouble, man.
What are you, anyway? One of those reenactor dudes? ‘Cause if you
are—”

“Shut up!” he hissed. But it was out. Lenny
felt the lukewarm spread of wetness on his thighs. Murph began to
cry.

“I’ll not ask you again,” the man said in
perfectly measured tone. “Tell me why you are here.”

“You know, drinkin’. Kickin’ back. Listen, if
you let us go we’ll never come—”

“You desecrate this soil
.” The words
came in a snarl.

The muzzle of the Colt was no more than
twelve inches from his head when it went off with a thunderous
BOOM. Murph gasped, hysterical. “Please, please d-don’t nonono!” he
babbled, hands crossed in front of his face like a battered
boxer.

“You leave me no choice. I am sorry.” And
with that, the party was over.

The soldier turned on his heel, strode to a
clump of trees. “Brutus,” he called softly. A horse appeared,
purple-black, save for a white triangle between its eyes. He reared
and his nostrils flared.