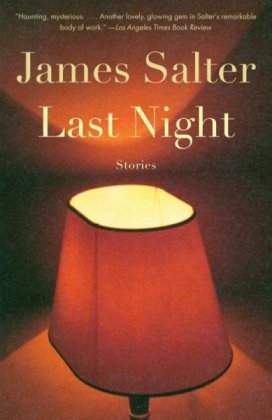 “
Last Night
is a book for anyone who’s ever loved, lusted, or longed. This mature collection of ten stories is sexy and somber at the same time. . . . The title story is an unforgettable masterpiece that could rank with Anton Chekhov’s ‘The Lady with the Dog’ as one of the great stories of contemporary literature. . . . Salter astonishes us and is as unpredictable as life itself.” —
The Philadelphia Inquirer

“[Salter’s] stories unfold with dreamlike fluidity in an atmosphere of shadows and indistinct forms, like watercolors in a dark palette. . . . It’s a measure of James Salter’s writerly gifts that one wishes each of his stories longer. . . . Fascinating, lyric, memorable, poignant, harrowing, powerful.”

—
The New York Review of Books

“Unpredictably brilliant. . . . Beautiful. . . . Salter is still writing taboo-breaking stories. Their aim [is] to prick through pomposity to the person beneath. . . . Brazen and honest.” —
Financial Times

“A+. . . . These ten nuanced stories are marvelously taut and seamless, crafted in majestically simple prose.” —
Edge.com

“
Last Night
is a masterpiece of short fiction.”

“The ragged tumult of intimacy has long been the province of James Salter. . . . [He] is a master at capturing that moment when matters go completely and unexpectedly awry. He then mines that moment for all its beauty, horror, poignancy, love, lust, loss, grief and confusion, and renders it in unforgettable prose.” —
The Seattle Times

“Salter writes superbly. . . . The title story, which comes last in the book, will be in anthologies for years to come. It packs a punch you didn’t think short stories delivered anymore.”

“Masterful. . . . Exquisite. . . . In this era of chatter and distraction, James Salter’s carefully honed stories offer a welcome precision. . . . These are not contemporary snapshots of how we live now, but timeless studies of the maneuverings inherent in close relationships.”

“Salter captures the essence of a moment or character using only its sparest elements. Like light striking water at just the right angle, his language makes these stories shimmer with life.” —
Rocky Mountain News

“Stunning. . . . James Salter is an extraordinary writer, probably among the very best we have. And anyone who has the least bit of interest in stories or in what it means to be human should be thrilled that a new book by him is appearing. . . . Salter’s magic with the language can take one’s breath away.” —
The Southampton Press

“Despite Salter’s (deserved) position among the upper reaches of contemporary authors of literature, he’s also something else: extremely accessible.” —
The Tampa Tribune

“Paradise, in Salter’s fiction, has always already been lost. His characters drift, drink, stumble, sink, tempt others to sin and sin themselves. Yet the memory of a greener time persists, if only in his prose. While reading it, how happy one is.” —
Chicago Tribune

“James Salter is one of a handful of writers whose name is uniformly uttered in reverence by fellow writers. . . . Salter can toss off sentences [that] stop you cold in their lyric precision seemingly at will, two or three on every page. . . . The work of an American master.” —
The Hartford Courant

PHILIP MARRIED ADELE on a day in June. It was cloudy and the wind was blowing. Later the sun came out. It had been a while since Adele had married and she wore white: white pumps with low heels, a long white skirt that clung to her hips, a filmy blouse with a white bra underneath, and around her neck a string of freshwater pearls. They were married in her house, the one she’d gotten in the divorce. All her friends were there. She believed strongly in friendship. The room was crowded.

— I, Adele, she said in a clear voice, give myself to you, Phil, completely as your wife . . . Behind her as best man, somewhat oblivious, her young son was standing, and pinned to her panties as something borrowed was a small silver disc, actually a St. Christopher’s medal her father had worn in the war; she had several times rolled down the waistband of her skirt to show it to people. Near the door, under the impression that she was part of a garden tour, was an old woman who held a little dog by the handle of a cane hooked through his collar.

At the reception Adele smiled with happiness, drank too much, laughed, and scratched her bare arms with long show-girl nails. Her new husband admired her. He could have licked her palms like a calf does salt. She was still young enough to be good-looking, the final blaze of it, though she was too old for children, at least if she had anything to say about it. Summer was coming. Out of the afternoon haze she would appear, in her black bathing suit, limbs all tan, the brilliant sun behind her. She was the strong figure walking up the smooth sand from the sea, her legs, her wet swimmer’s hair, the grace of her, all careless and unhurried.

They settled into life together, hers mostly. It was her furniture and her books, though they were largely unread. She liked to tell stories about DeLereo, her first husband—Frank, his name was—the heir to a garbage-hauling empire. She called him Delerium, but the stories were not unaffectionate. Loyalty—it came from her childhood as well as the years of marriage, eight exhausting years, as she said—was her code. The terms of marriage had been simple, she admitted. Her job was to be dressed, have dinner ready, and be fucked once a day. One time in Florida with another couple they chartered a boat to go bonefishing off Bimini.

— We’ll have a good dinner, DeLereo had said happily, get on board and turn in. When we get up we’ll have passed the Gulf Stream.

It began that way but ended differently. The sea was very rough. They never did cross the Gulf Stream—the captain was from Long Island and got lost. DeLereo paid him fifty dollars to turn over the wheel and go below.

— Do you know anything about boats? the captain asked.

— More than you do, DeLereo told him.

He was under an ultimatum from Adele, who was lying, deathly pale, in their cabin. — Get us into port somewhere or get ready to sleep by yourself, she’d said.

Philip Ardet had heard the story and many others often. He was mannerly and elegant, his head held back a bit as he talked, as though you were a menu. He and Adele had met on the golf course when she was learning to play. It was a wet day and the course was nearly empty. Adele and a friend were teeing off when a balding figure carrying a cloth bag with a few clubs in it asked if he could join them. Adele hit a passable drive. Her friend bounced his across the road and teed up another, which he topped. Phil, rather shyly, took out an old three wood and hit one two hundred yards straight down the fairway.

That was his persona, capable and calm. He’d gone to Princeton and been in the navy. He looked like someone who’d been in the navy, Adele said—his legs were strong. The first time she went out with him, he remarked it was a funny thing, some people liked him, some didn’t.

— The ones that do, I tend to lose interest in.

She wasn’t sure just what that meant but she liked his appearance, which was a bit worn, especially around the eyes. It made her feel he was a real man, though perhaps not the man he had been. Also he was smart, as she explained it, more or less the way professors were.

To be liked by her was worthwhile but to be liked by him seemed somehow of even greater value. There was something about him that discounted the world. He appeared in a way to care nothing for himself, to be above that.

He didn’t make much money, as it turned out. He wrote for a business weekly. She earned nearly that much selling houses. She had begun to put on a little weight. This was a few years after they were married. She was still beautiful—her face was—but she had adopted a more comfortable outline. She would get into bed with a drink, the way she had done when she was twenty-five. Phil, a sport jacket over his pajamas, sat reading. Sometimes he walked that way on their lawn in the morning. She sipped her drink and watched him.

— I’ve had good sex since I was fifteen, she said.

— I didn’t start quite that young, he confessed.

— Maybe you should have.

— Do you remember when we first got started?

— We could hardly stop, she said. You remember?

After he’d gone to sleep she watched a movie. The stars grew old, too, and had problems with love. It was different, though—they had already reaped huge rewards. She watched, thinking. She thought of what she had been, what she had had. She could have been a star.

What did Phil know—he was sleeping.

AUTUMN CAME. One evening they were at the Morrisseys’— Morrissey was a tall lawyer, the executor of many estates and trustee of others. Reading wills had been his true education, a look into the human heart, he said.

At the dinner table was a man from Chicago who’d made a fortune in computers, a nitwit it soon became apparent, who during the meal gave a toast,

— To the end of privacy and the life of dignity, he said. He was with a dampened woman who had recently found out that her husband had been having an affair with a black woman in Cleveland, an affair that had somehow been going on for seven years. There may even have been a child.

Eye for an Eye by Bev Robitai
Crazy Nights (The Barrington Billionaires Book 3) by Danielle Stewart
MagicalMistakes by Victoria Davies
Framed and Hung by Alexis Fleming
Zeke (The Powers That Be, Book 2) by Harper Bentley
Bigger Than the Sky (Serenity Point) by Harper Bentley
Their Marriage Reunited by Sheena Morrish
The Winds of Fate by Elizabeth St. Michel
Scimitar Sun by Chris A. Jackson
What He Bargains (What He Wants, Book Nineteen) by Hannah Ford
Our partner