Last of the Cold War Spies 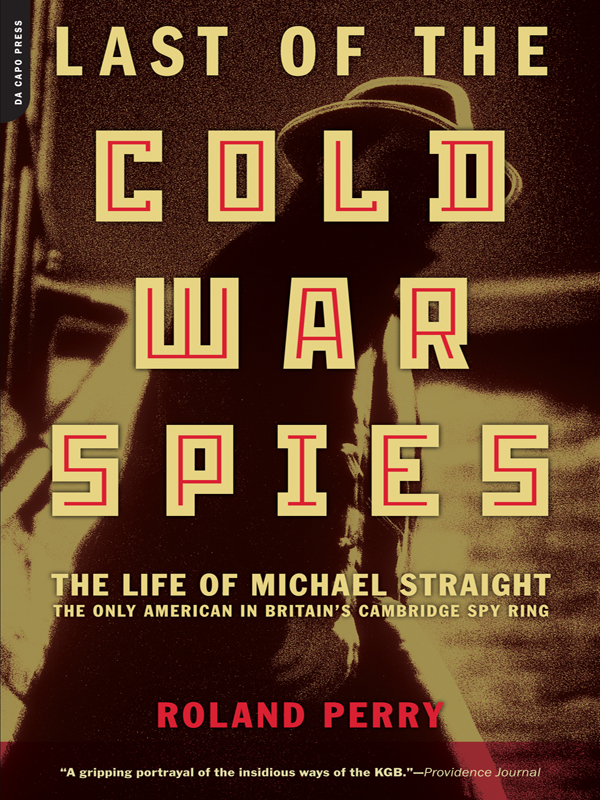 LAST OF THE
COLD WAR SPIES

Hidden Power: The Programming of the President

Monash: The Outsider Who Won a War

Miller’s Luck: The Life and Loves of Cricket’s Cavalier

Captain Australia: A History of the Celebrated Captains of Test Cricket

Program for a Puppet

Blood Is a Stranger

Faces in the Rain

LAST OF THE
COLD WAR SPIES
THE LIFE OF MICHAEL STRAIGHT

THE ONLY AMERICAN IN BRITAIN’S CAMBRIDGE SPY RING

All rights reserved. No part of this publication may be reproduced, stored in a retrieval system, or transmitted, in any form or by any means, electronic, mechanical, photocopying, recording, or otherwise, without the prior written permission of the publisher. Printed in the United States of America.

Published by Da Capo Press
A Member of the Perseus Books Group
http://www.dacapopress.com

Da Capo Press books are available at special discounts for bulk purchases in the U.S. by corporations, institutions, and other organizations. For more information, please contact the Special Markets Department at the Perseus Books Group, 11 Cambridge Center, Cambridge, MA 02142, or call (800) 255-1514 or (617) 252-5298, or e-mail
[email protected]

D
espite Michael Straight’s 1963 “confession” to the FBI that his covert KGB activity ceased in 1942, there is much material to establish otherwise, and FBI files (based mainly on the agency’s interrogation of him), the MI5 and CIA files, and testimony from others, as well as his own actions, tell a different story. Straight’s own
Apologia
demonstrates his thirty-year effort to cover up first his secret recruitment by the KGB and then his continuing secret activity. It also explains some of the forces that directed this intellectually gifted, fiercely ambitious American.

Friends, enemies, and close family members and their diaries provided far more revealing details of how others saw this important figure in their lives. Further information and observations came from interviews with people who knew Straight while they were employed by the KGB, CIA, FBI, MI6, and MI5. They confirmed his activities and his character. Many other sources were helpful, including the NSA (Venona), FBI, CIA, United States State Department, and British intelligence files. Transcripts from the House Un-American Activities Committee, the U.S. Senate, and other hearings were more than useful, as was the Dartington Hall archival material.

The recent release of Straight-related KGB files, generally submitted as summaries, was carefully orchestrated to be in line with what was already
known about Straight’s work as a KGB agent. But
Last of the Cold War
Spies
reveals how Michael Straight was present at many of the important events and places at the heart of the Cold War. On every occasion and in every place he was on a KGB assignment. This distinguishes
Last of the
Cold War Spies
from the plethora of books that were published on both sides of the Atlantic after the collapse of Communism. Many espionage writers rushed for Moscow gold and collaborated with KGB agents to create works that were dependent on what was supplied by Russian intelligence. These writers produced millions of words, yet next to nothing that was memorable or revealing. The KGB and its successor were always in control of what came out of their archives. No significant information was made public that Western intelligence didn’t already know. The mass of disinformation generated was a gigantic KGB con.
Last of the Cold War
Spies
was not written in collaboration with a former KGB operative. Although the book references KGB archive material, it keeps it in proper perspective as representing the view of Russian intelligence, which continues to deceive the West fifteen years after the collapse of Communism.

M
ichael Whitney Straight was always going to be different from the rest of the Cambridge University ring of spies recruited by Russian intelligence in the 1930s. First, he was the only American among a group otherwise boasting British backgrounds. Second, he was the wealthiest. And third, he was the most ambitious. He wanted to succeed at something
other
than being a thief and errand boy for Joseph Stalin. Most of the others in the ring were dedicated wholly to a life of espionage work. To say the others were motivated by ideology is not enough. Once the Stalinist brand of Marxism was exposed as a fraud, many were disillusioned but still carried on.

Kim Philby suggested he only ever wanted to be a spy, which indicated a mind excited by the thrill of deception. His thrill turned sour when he defected to Russia, where his bosses shunned him. The rejection turned him suicidal and exacerbated his alcoholism.

Guy Burgess’s KGB-admired capacity for imaginative lying and scheming was cut short by his own whimsical decision to defect with Donald Maclean in 1951. Burgess hated his life in Russia and died in miserable conditions in 1963.

Donald Maclean, like Kim Philby, took his Soviet agency seriously all his life. He carried on his work in Russia long after defecting. Although
he was motivated by ideology, from all accounts he had a sad life in Russia despite never regretting his spying.

John Cairncross, the brilliant, impoverished Scotsman, became an expert on the French writer Molière. While more proud of his profound undercover work for the KGB, especially with the Battle of the Kursk, which helped change the course of World War II, Cairncross was happy to be acknowledged for his academic success. He was blown as a spy in 1951.

Victor Rothschild spread his tentacles everywhere on behalf of British, Israeli, and Soviet intelligence and put his prodigious intellectual capacities across several disciplines. At the beginning his support for the Soviet Union was rooted in self-preservation and the practical realities of prewar Europe. The Rothschild family had been a target for Hitler and the Nazis in every country they occupied. Postwar, his reasons were more murky. Like his forebears who had considerable influence in Europe in the nineteenth century, Rothschild thrived on secrecy, subterfuge, and behind the-scenes machinations. He was happy in the back rooms of power manipulating events to achieve success for his nefarious projects.

Anthony Blunt’s espionage work was marginalized after the defection of Burgess and Maclean, although he still on occasion met with his Soviet control, Yuri Modin. He had another, more visible career as the royal art curator and competent lecturer and writer of turgid art books. Like Rothschild, he thrived out of the limelight, in the hidden world of the palace and the esoteric world of art academia.

Michael Straight, in contrast to all of them, saw himself at twenty-one years of age as being able to combine his clandestine work for the Russians with a very public life as a politician. Like Rothschild, his forebears from the nineteenth century set the pattern for his ambitions. Before he was recruited, Straight harbored aspirations of running for Parliament in the United Kingdom. When he arrived in New York in 1937, he canvassed by knocking on doors for a local politician. After the war in late 1945, he approached the Democrats about running for Congress. When that bid was thwarted because of his student-days communist affiliation at Cambridge, he became a key strategist in the early campaign of Soviet supporter Henry Wallace’s bid for the presidency in 1948. After he failed as a politician, he fell back on the editorship of the family magazine,
The New Republic
. From this position, Straight had a lesser platform than mainstream politics, yet it was still a more public role than anyone else in the ring had
cultivated. From the mid-1950s to the end of the 1960s he used the pretense of being a novelist and playwright to carry out KGB-directed espionage missions. Straight’s role as a federal arts administrator in the late 1960s meant even more public exposure and perhaps fulfilled a secondary ambition—a cover for his Russian intelligence work and propaganda.

Michael Straight, more than anyone else in the Cambridge ring, was predisposed to the secret life he chose in Russian intelligence. The influences of his wealthy background, his socially conscious mother, and the siren call of Stalinism that he followed with such passion determined his career path and life. His belief that Stalin himself arranged for his placement in the United States, as well as the emotional blackmail inflicted on him by Burgess, propelled the ambiguous Straight into a secret world. Rebecca West, in her book
The Meaning of Treason
, wrote of the peculiar attraction of the espionage demimonde that, although not the whole reason, was still appropriate for Straight:

Sweet it is to be not what the next man thinks one, but far more powerful, to know what he wrote in a letter he was so careful to seal; to charm the confidence of the unsuspecting stranger; to put one’s finger whimsically through the darkness and touch the fabric of the state, and feel the unstable structure rock, and know it’s one’s doing and not a soul suspecting it, and to do all this for nobility’s sake.

The objective for Straight and his fellow spies in the Cambridge ring was to topple the structure of the capitalist state and to see it everywhere emerge as communism. The dream of revolution in the 1930s gave way to the reality of World War II, and aspirations for change were put on hold. The postwar divide between East and West caused even the most fanatical communists to realize that democracies and capitalism would be hard to topple.

Yet, for some, the expectations remained. In March 1950 when Straight appeared before the notorious House Un-American Activities Committee (HUAC), he gave an indication of this when discussing the fate of the American Communist Party:

We believe if it (the Communist Party) becomes a clear and present danger, then by that time communism will have triumphed in the rest of the world before it becomes a threat in this country. We think the critical front is in Berlin, Southeast Asia, India and Rome.

Change, it seemed, would take time, and the rest of the world had to fall before the United States was ripe for change. As the 1950s progressed, the resolve of the United States to fight communism everywhere remained firm. Straight’s expectation changed to just hope. By the late 1950s, Cold War realities set in, and hope for revolution evaporated. By 1963, Straight went to the FBI and made a misleading confession of sorts about his past. He at first appeared to expose others in the Cambridge spy ring. But he gave away nothing. He, Blunt, and others continued on with a long-term disinformation campaign.

By the end of the 1960s, Straight was in the Nixon administration channeling U.S. taxpayer funds for the arts into dramatizing revolution on stage. Although this was hardly the real thing, for a cultured sophisticate like Straight it provided enough revolutionary oxygen for him to enjoy the job. After all, he was still doing useful work for the cause, and he remained an agent of considerable influence.

The Seduction of Lady X by London, Julia
Fix by Ferrett Steinmetz
The Final Silence by Stuart Neville
Conventions of War by Walter Jon Williams
Copy That by Helenkay Dimon
Run the Gantlet by Amarinda Jones
An Affair of Deceit by Jamie Michele
Far Afield by Susanna Kaysen
A Lucky Child: A Memoir of Surviving Auschwitz as a Young Boy by Thomas Buergenthal, Elie Wiesel
Below by Meg McKinlay
Our partner