Elizabeth Hand (b. 1957) is the award-winning author of science fiction and fantasy titles such as
Winterlong
,
Waking the Moon
,
Black Light
, and
Glimmering
, as well as the thrillers
Generation Loss
and
Available Dark
. She is commonly regarded as one of the most poetic writers working in speculative fiction and horror today.

Hand was born in San Diego and grew up in Yonkers and Pound Ridge, New York. During the height of the Cold War, she was exposed to constant air raid drills and firehouse sirens, giving her early practice in thinking about the apocalypse. She attended the Catholic University of America in Washington, DC, where she received a BS in cultural anthropology.

Hand’s first love was writing, but many Broadway actors lived in her hometown of Pound Ridge, and by high school she was consumed with the theater. She wrote and acted in a number of plays in school and with a local troupe, The Hamlet Players. After college, writing stories became her primary interest, and the work of Angela Carter cemented that interest. Hand realized that she wanted to create new myths and retell old ones, using a heightened prose style.

Hand’s first break came in 1988 with the publication of
Winterlong
. In this novel, Hand explores the City of Trees, a post-apocalyptic Washington, DC. The story focuses on a psychically enhanced woman who can read dreams and her journey through the strange city with her courtesan twin brother. The book’s success led to two sequels:
Aestival Tide
and
Icarus Descending
. All three novels were nominated for the Philip K. Dick Award.

When Hand isn’t writing stories of decadence and deities, she divides her time between the coast of Maine and London, with her partner, UK critic John Clute. She is a regular contributor to numerous publications, including the
Washington Post
and the
Magazine of Fantasy and Science Fiction
. 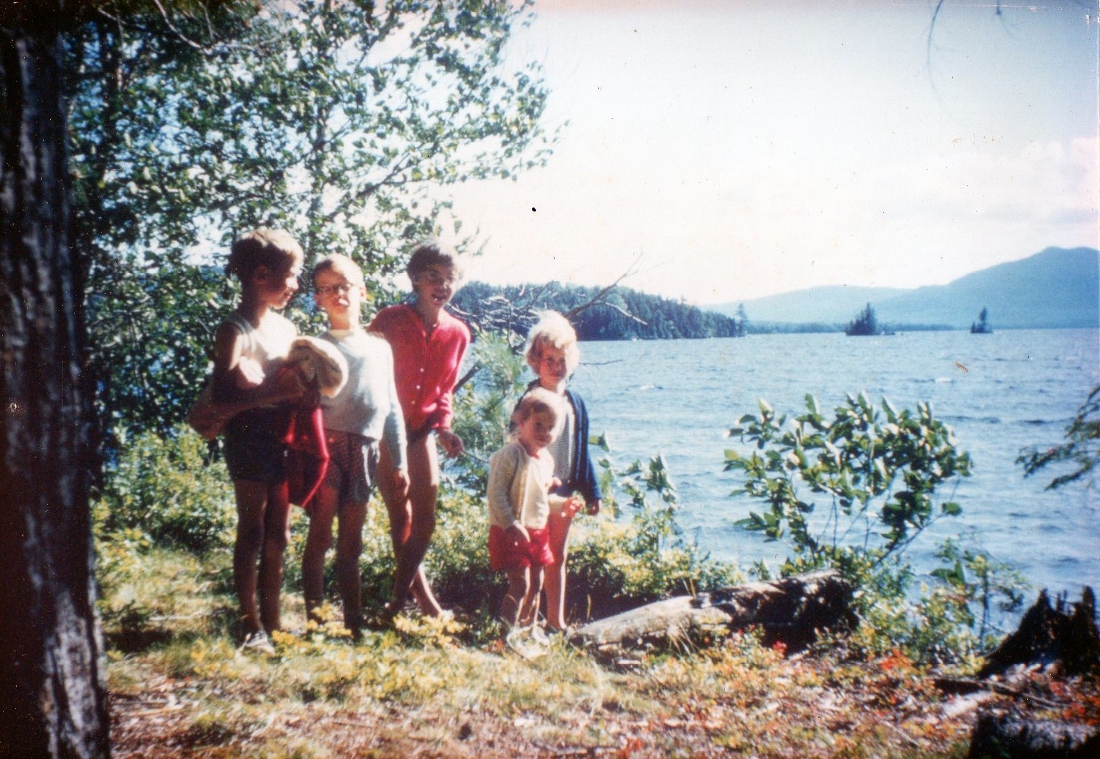 Hand is the oldest of five siblings in a very close-knit family. This photo shows them in 1967, on one of their camping trips to Maine and Canada. All five kids, then under the age of ten, shared a canvas tent with their parents. From left to right: Brian, Patrick, Elizabeth, Kathleen, and baby Barbara. “Maine imprinted on me during this time, which is why I've lived there for the last twenty-five years,” Hand says. 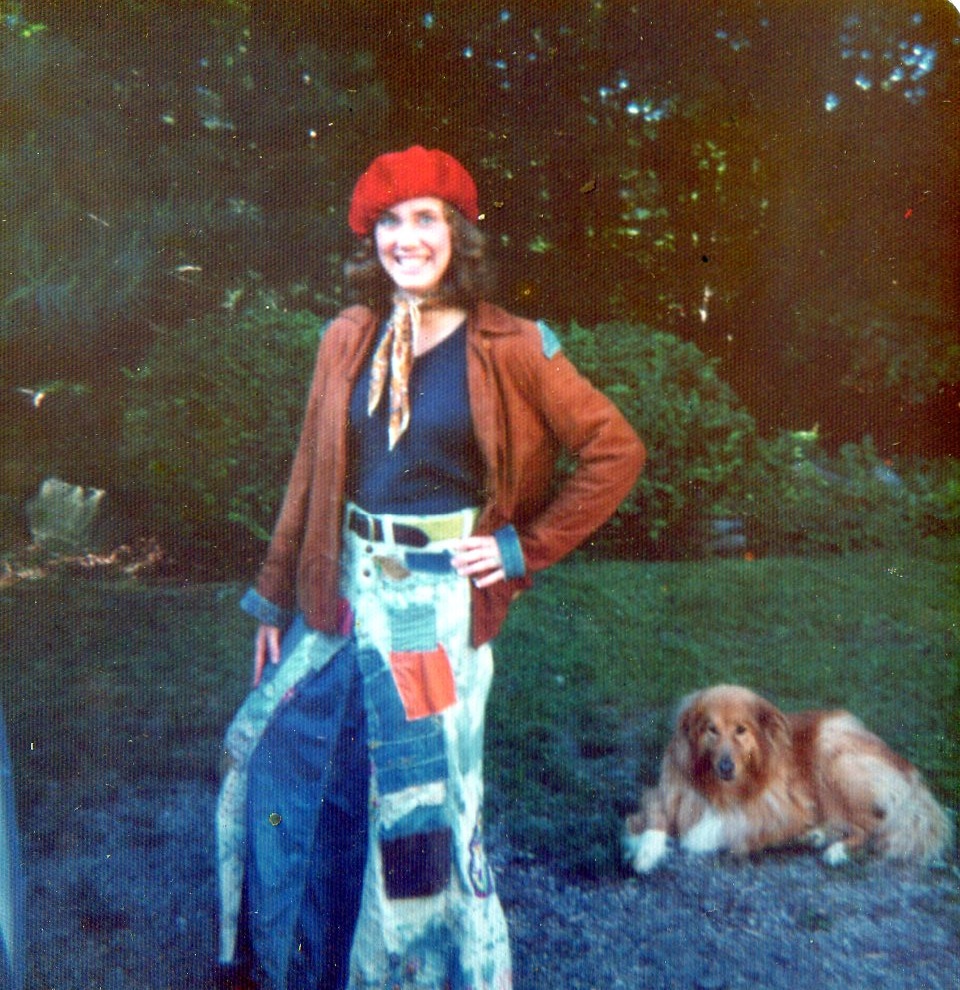 Hand in her driveway with her beloved family dog Cindy shortly before leaving for college in Washington, DC. “Note the skirt, made from a pair of massively embroidered jeans; my favorite red velvet beret, which my mother gave me for Christmas and which disappeared under dark circumstances a few years later; my Mom’s suede jacket (I added the denim cuffs); and needlework belt with my initials on it, made by my grandmother Hand. You can’t see them, but I was also wearing my lace-up Frye boots.” 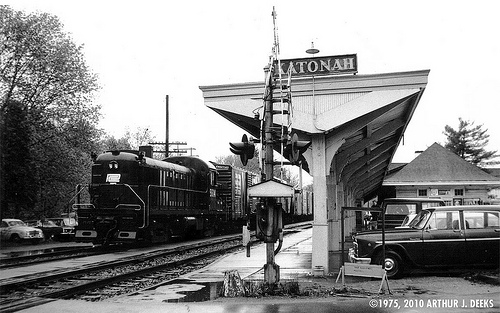 In her journal, Hand once wrote, “I am being haunted by a town.” The town was Katonah, New York, which she transformed into Kamensic Village, the setting or background for much of her fiction. This photo from 1975 shows the train station where characters Lit and Jamie Casson make their escape at the end of the novel
Black Light
. 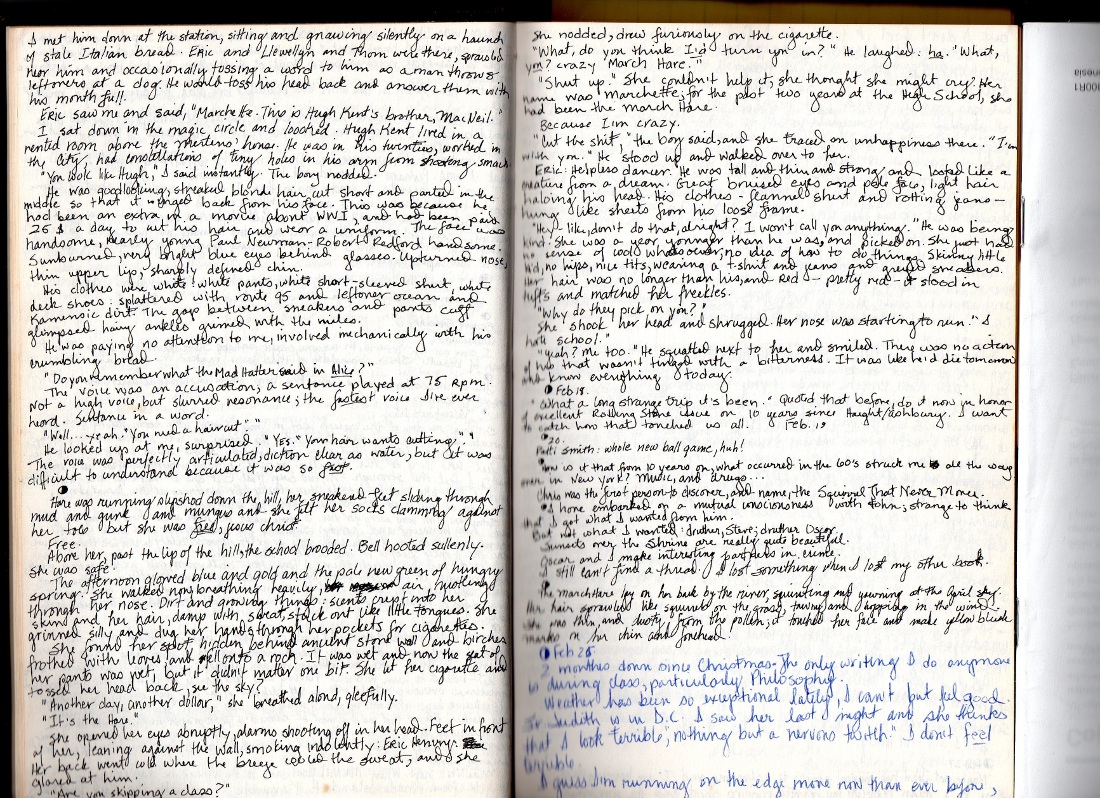 Hand recalls: “In 1976, I was hitchhiking in Putnam County, New York, with my friend Katy. A guy our age picked us up, we drove around and hung out for a few hours, and he then dropped me back at my parents’ house in Pound Ridge. It was only after I got home that I realized I’d left my journal in his car.

Flash forward to 1999, shortly after
Black Light
was published. I was visiting my folks in Pound Ridge when the phone rang: I picked it up and a voice asked, ‘Is this Elizabeth Hand?’ It turned out to be the guy who’d picked us up—he’d seen a copy of
Black Light
in his local bookstore and remembered my name (which was in the journal). And, when he went back and read the journal again (which he’d done back in 1976 as well—hey, I would have, too), he realized that some of the people and places I’d written about in the journal ended up in
Black Light
.” 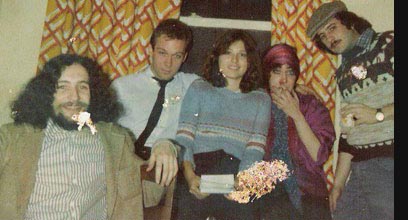 Hand in proto-punk mode with some friends at their second New Year’s gathering at the Hotel Empire in New York City—at the time a “total dump” (just the way they liked it). Left to right: Michael, Oscar, Julie, Elizabeth, and Steve. Hand says: “The red blodge by my nose is actually my crimson fingernail and a cigarette. I was a chain smoker, also an early do-rag adapter. Oscar inspired Oliver in Waking the Moon; the book was dedicated to him.” 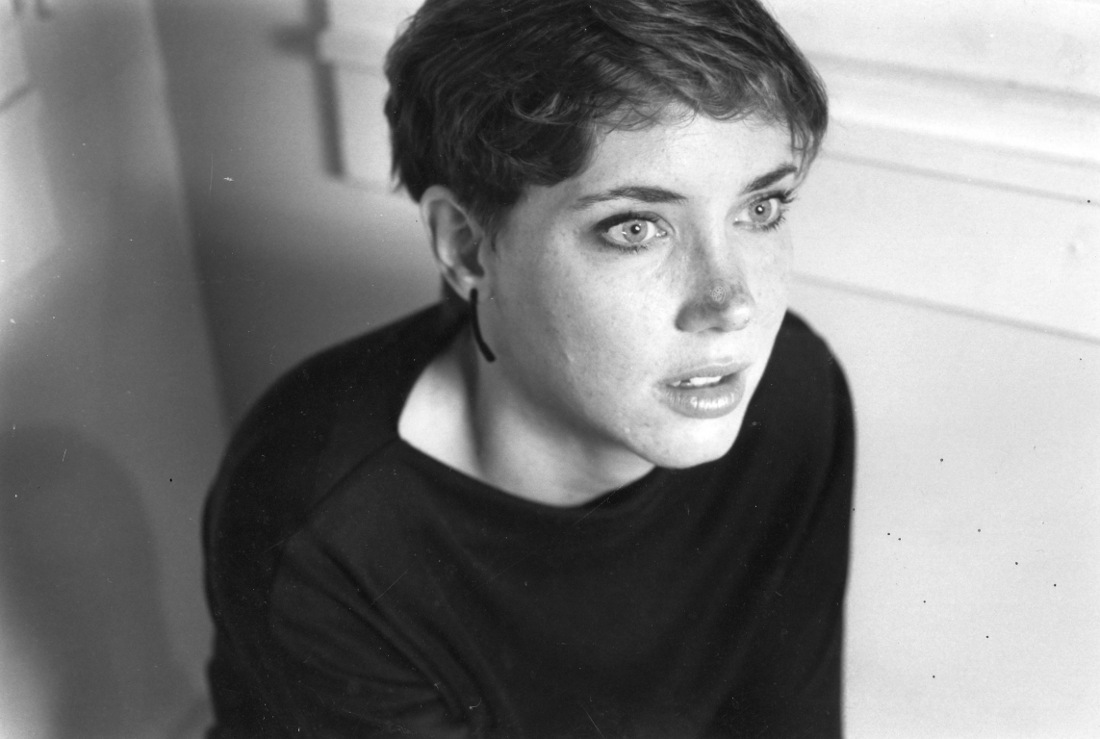 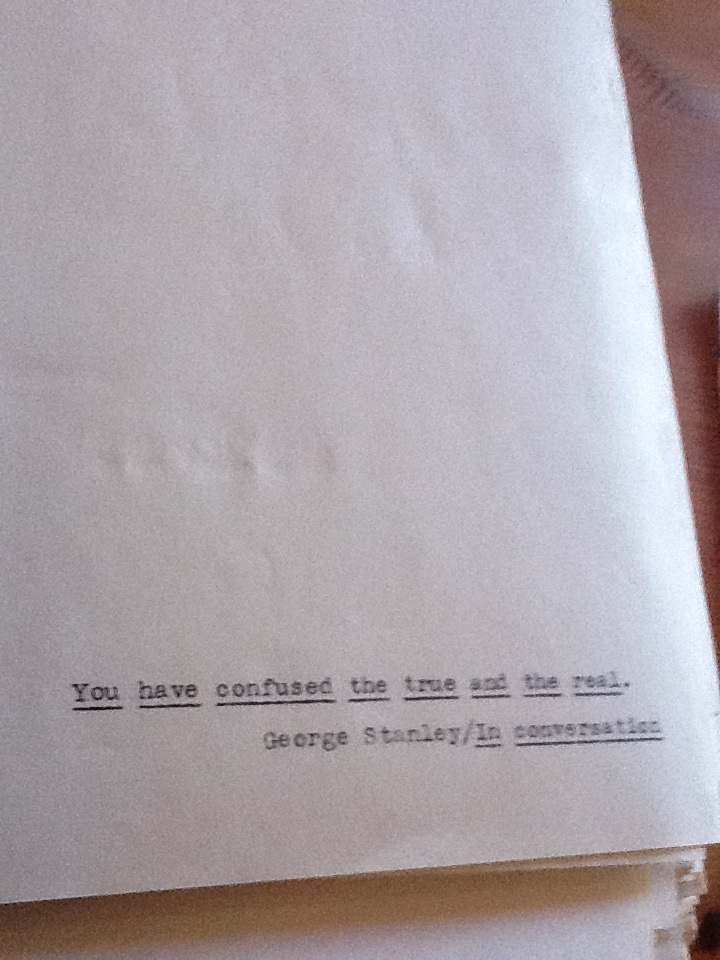 Hand read Samuel R. Delany’s
Dhalgren
when it first came out in 1975, and it was a huge influence on her early works, such as
Winterlong
. In spring 2012, Hand visited Washington, DC, and saw her dear friend Rafael Sa’adah, who had an amazing surprise in store: one of the original manuscripts of
Dhalgren
, which he’d acquired from a book dealer. Hand says, “Raf unwrapped it for the first time and we went through it page by page. Like entering a literary Tutankhamun’s tomb.” Hand took many photos of the text, including this shot of the novel’s epigraph, which she has always loved.

Thanks to my brother Brian, for the inspiration for Icarus. Also, profound thanks to Geoffrey Chester of the National Air and Space Museum, Smithsonian Institution, for his technical advice. Any errors of fact or judgment contained herein are, of course, the author’s.

This is a work of fiction. Names, characters, places, and incidents either are the product of the author’s imagination or are used fictitiously. Any resemblance to actual persons, living or dead, businesses, companies, events, or locales is entirely coincidental.

Traveling with Pomegranates by Sue Monk Kidd
Keppelberg by Stan Mason
Death of an Addict by Beaton, M.C.
The Plume: The Second Anthology by Ella Ardent
Gifted To The Dragon: A Paranormal Pregnancy Romance (The Gifted Series Book 2) by Amira Rain
A Question of Impropriety by Michelle Styles
Stattin Station by David Downing
His Punishment by Marie, Pia
The Birth of Venus by Sarah Dunant
Lies Like Love by Louisa Reid
Our partner