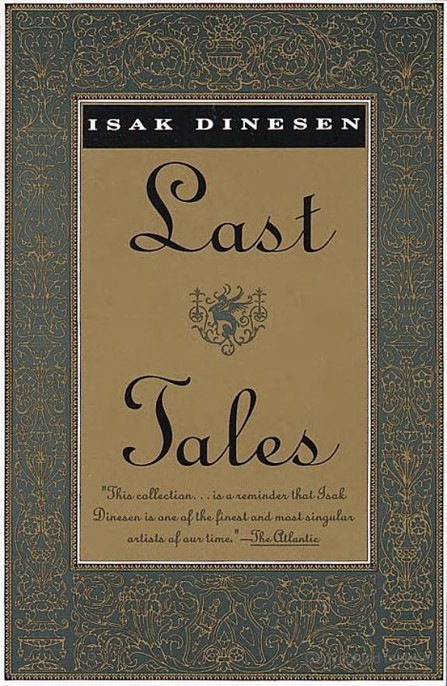 All rights reserved under International and Pan-American Copyright Conventions.
Published in the United States by Vintage Books, a division of Random House,
Inc., New York, and simultaneously in Canada by Random House of Canada
Limited, Toronto. Originally published in hardcover by Random House, Inc.,
New York, in 1957.

OF HIDDEN THOUGHTS AND OF HEAVEN

THE CARYATIDS, AN UNFINISHED TALE

CONVERSE AT NIGHT IN COPENHAGEN

W
ho are you?” the lady in black asked Cardinal Salviati.

The Cardinal looked up, met the gaze of her wide-open eyes and smiled very gently.

“Who am I?” he repeated. “Verily, Madame, you are the first of my penitents who has ever asked me that question—the first, indeed, who has ever seemed to presume that I might have an identity of my own to confess to. I was not prepared for your question.”

The lady remained standing up straight before him; without taking her eyes off his face, she mechanically pulled on her long gloves.

“Men and women,” the Cardinal went on, “in the course of time have come to me and have asked my advice. Many of them have come in deep distress …”

“As I myself!” she exclaimed.

“In deep distress and anguish,” he continued, “which, however, have never been deeper than my compassion with each of them—and have put their problems before me in all kinds of terms. Madame, the multitude of statements and arguments have been but so many variations of one single cry of the heart, of one single question: ‘Who am I?’ If I could but answer that question, if I could but solve that riddle for them, my consultants would be saved.”

“As I myself!” she cried out for the third time. “When I first told you of the horrible conflict, of the cruel dilemma which was rending my heart, I put before you, I know, a number of details, in themselves unconnected and contradictory, and so jarring that I had to stop the ears of my mind to them. In the course of our talks together all these fragments have been united into a whole. Oh, not into an idyll—I am well aware that I am in for a
furioso
—but into a harmony without a discordant note to it. You have shown me myself! I might tell you that you had created me, and that I had come to life under your hands, and surely it would have been both happiness and pain to have been thus created. But it is not so; my happiness and my pain are greater still, for you have made me see that I was already created—aye, created by the Lord God Himself and issued from His hands. From this hour, what on earth or in heaven can harm me? To the eyes of the world, it is true, I am standing at the edge of an abyss, or walking in a blizzard in wild mountains, but the abyss and the blizzard are the work of God and are infinitely and magnificently beautiful!”

She closed her eyes, then after a second looked up again.

“Yet,” she said, her voice soft, like the voice of a violin, “I shall be asking one more favor from you. I beg you to answer my question. Who are you?”

“Madame,” said the Cardinal after a long pause, “I am not in the habit of talking about myself, and your demand makes me feel a little shy. But I do not want to see you go
away—and maybe we two shall never meet again—without having granted you your last request. And indeed,” he added, “I am beginning to take an interest in your question. Allow me, then, in order to save my modesty, to answer you in the classic manner, and to tell you a story.

“Take a seat, Madame. The story may be somewhat intricate, and I myself may be a somewhat slow raconteur.”

Without a word more the lady sat down in the big armchair indicated to her. The library in which the two found themselves was cool and high up; the noises of the street only reached the talker and the listener like the carefree murmur of a calm sea.

A girl of fifteen, the Cardinal began, with rich gifts of heart and mind, and magnificently innocent, was given away in marriage to a brusque and bigoted nobleman three times her age, who took a wife to have his name live on. A son was born to them, but the child was delicate and had but one eye. The doctors, who found a reason for the sad misfortune in the mother’s young age, advised her husband to allow a few years to pass before the birth of another child. Not without some bitterness, the gentleman decided to follow their advice, and in his own mind fixed the period of waiting at three years. So as not to expose his inexperienced wife, during these three years, to the temptations of a worldly life, he took up residence in a palatial villa of his, overlooking beautiful, lonely mountain scenery, and engaged an old, impoverished but proud-hearted maiden aunt as
dame de compagnie
. And so as not to have the daily anxiety for a feeble, threatened being affect the Princess’ youthful vitality, he put his son out to nurse with a tenant family on another estate.

Possibly Prince Pompilio, who generally had firm faith in his own judgment, ought not this once to have yielded so easily to the old doctors’ opinion. His young wife had accepted her circumstances in life, her marriage and her husband,
her palazzo and her coach, the admiration of a brilliant society, and in the end her frail little son, exactly as in former days she had accepted the dolls and the rosaries presented to her, the regulations of the convent school, and her own transformation from child into schoolgirl, and from schoolgirl into maiden. Even the separation from her child she had suffered in the same way, as the ordinance of higher powers. During her pregnancy, while she had been watched over and petted by all who surrounded her, she had come to see herself as a fragile, precious vessel, within which a rare seed had been laid down to germinate, and at the end of the term it had been her husband’s old name to which she had given birth. Her personal share in the venture was now but the slightly aching echo of a faint little cry. In the course of the three years by the mountain-lake she learned to dream.

The villa contained a fine library. Here its master passed most of the time that he could spare from the administration of his property and the visits of prominent ecclesiastics. Upon the library shelves tall tomes, with their backs to the world, preserved the ponderous knowledge of ages. But from time to time during three centuries, volumes of more frivolous thoughts, of longing and levity and words that rhymed, had happened to leap in amongst them. On a day when her husband was away, the mistress of the villa found her way to the library. The large cool room, which till now had known only black and bleak human figures, became the abode of a fresh young being in white muslin, whose rich tresses, as she was reading, tumbled forward and caressed the parchment, and who seemed to be lifted from her chair by her own deep sighs of sadness or delight, and to be blown by them to and fro on the marble floor. It fell in love with her; it became a bower above a fountain nymph, shaking down on its own the sweet fruits that her heart demanded.

Such excessive reading, the Prince reflected, might be harmful to his wife’s health and mind; she should be otherwise
occupied. Princess Benedetta had a pure and sweet voice, and within the second year of waiting the Prince appointed for her an old singing-master, who had once sung in opera. She gave herself up to music, as she had given herself up to books; her nature at first had listened, now it sang. Here, she felt, was a reasonable human language, within which things could be truthfully expressed. She was in good understanding with the cadenza, both the full or perfect cadenza and the deceptive cadenza, the
cadenza d’inganno
, of which musical dictionaries will tell you that it makes every preparation for a perfect finish and then, instead of giving the expected final accord, suddenly breaks off and sounds an unexpected, strange and alarming close. Here, quite obviously, the girl’s heart told her, was the infallible rule of the irregular.

A pleasant friendship soon united teacher and pupil. The old maestro entertained the noble young lady with reminiscences of the opera, and within the third year of waiting he obtained her husband’s consent to escort her and the old aunt to Venice to a performance of Metastasio’s masterpiece
Achilles in Scyros
. Here she heard Marelli sing.

How describe the beatitude into which, in the course of a few hours, her whole being was transported. It was a birth, the pangs of which were sweet beyond words, a mighty process which needed, and made use of, every particle of her nature, and in which, undergoing a total change, she triumphantly became her whole self.
Gratia
, Saint Thomas Aquinas himself says,
supponit et perficit naturam—
Grace presupposes Nature and brings it to perfection. Any person of soul and imagination will recognize the experience, every lover in the world is a disciple of the Angelic Doctor. I shall leave my analysis at that; I do not venture to compete with Saint Thomas.

At the seventh recall, before the last drop of the curtain—while the whole house was afoot and applauding madly—
from the stage-boards and from a nobleman’s gilt box, a pair of blue and a pair of black eyes met across the pit in a long deep silent glance, the first and the last.

Smile not—not even in pity—at the fact that the youth, who called to life a young woman’s heart, was a being of Marelli’s kind, a
soprano
, formed and prepared in the Conservatorio of Sant’ Onofrio, and once and for all cut off—no, laugh not!—from real life. But bear in mind that this whole love affair was of a seraphic order and went to a tune.

Old courtesans have confided to me that in their career they have met with young lovers, whose embrace had power to restore a long-lost virginity. Might there not likewise be young inamoratas with such genius for devotion that their glance will bestow upon its object the manhood of a demigod?

And all in all—that the emotion of longing, if suddenly and mightily aroused, should choose for its object the unrealizable—this may be a tragic or a grotesque phenomenon in life, but it is by no means a rare phenomenon. Among very young people it is even common, for with very young people the contempt of death and the love of death will be but one and the same heroic passion.

Their eyes met! Was, then, the unfortunate young singer, in the same way as the lady, wounded in the heart? All authorities agree that that year, in Venice, something happened to the soprano Giovanni Ferrer, who sang under the name of Marelli. His chief biographer, possibly out of tenderness for his ill-fated hero, interprets the fact differently, but does not deny it. The world-famous treble was changed. Till this hour it had been a celestial instrument, carried from stage to stage by an exquisitely elegant and graceful doll. Now it was the voice of the human soul. When, many years later, Marelli sang in St. Petersburg, the Empress Catherine, who had never been known to weep, sobbed bitterly all through the programme and cried:
“Ah, que nous sommes punis pour avoir le coeur pur!”
Poor Giovanni all his life remained faithful to the dark-eyed lady of Venice.