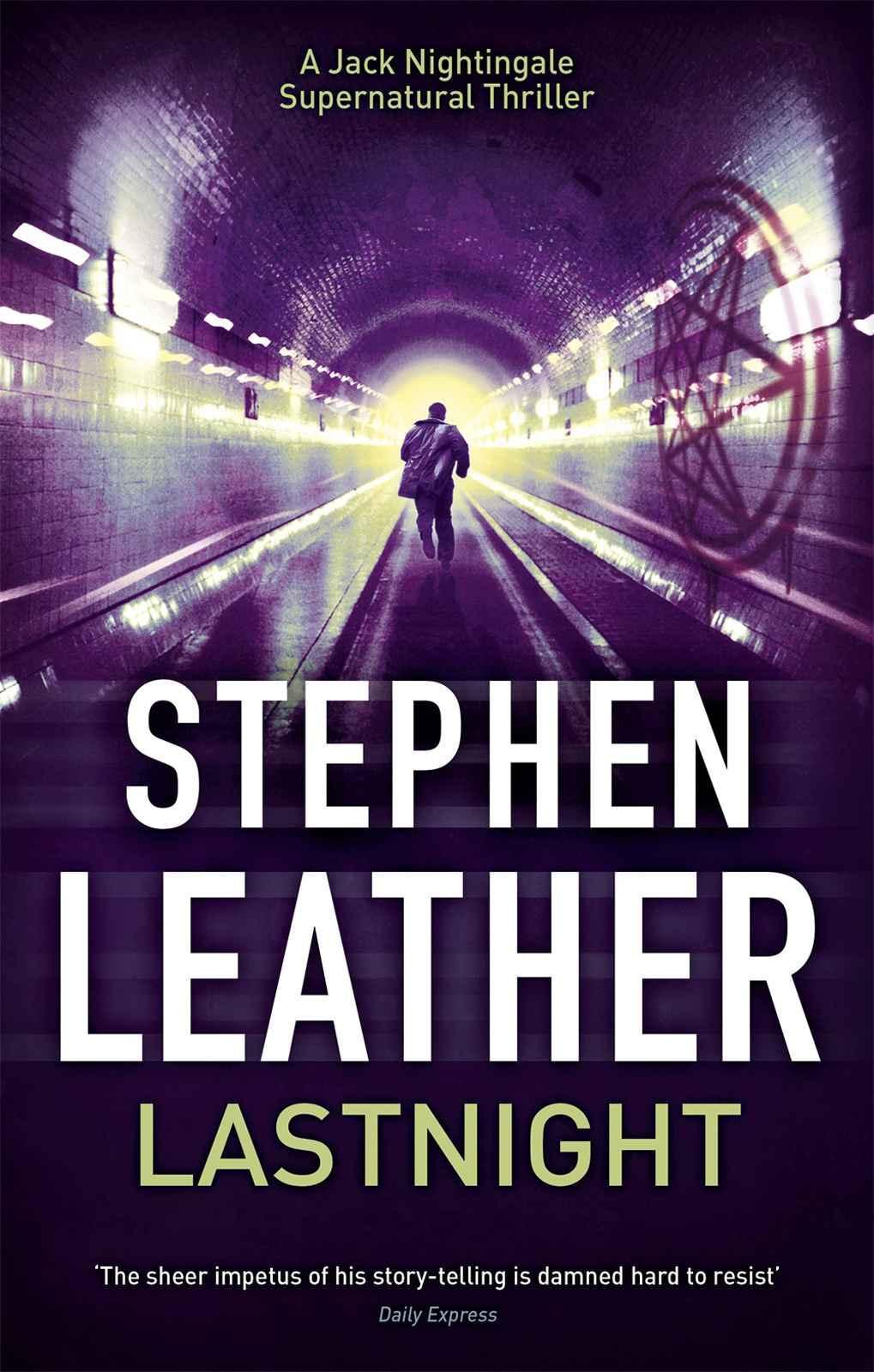 To find out about these and future titles, visit
www.stephenleather.com
.

The right of Stephen Leather to be identified as the Author of the Work has been asserted by him in accordance with the Copyright, Designs and Patents Act 1988.

S
uperintendent Ronald Chalmers slotted a piece of chewing gum into his mouth and studied the burned corpse laid out on the stainless-steel table. He had been a police officer for more than twenty-five years and had seen more than his fair share of dead bodies over that time but this one was definitely in the top five when it came to making him nauseous. Chalmers had put a dab of Vicks VapoRub under his nose before entering the room but even so the stench of barbecued meat was strong enough to make his stomach churn.

A deep Y-shaped incision had been made from the top of each shoulder down to the sternum and then the cut had continued to the pubic bone deviating to the left of the navel. The cut always went to the left. Chalmers didn’t know why, but it was always done that way. The internal organs had been removed and preserved. Then the top of the skull had been sawn off and the brain had been placed in a solution of formalin.

The superintendent looked over at the coroner who had performed the post-mortem. She was a heavy-set woman with short permed hair and thick-framed spectacles. Her name was Lesley MacDiarmid and Chalmers had known her for the best part of ten years. ‘So what do you think?’ asked Chalmers.

Chalmers sighed. MacDiarmid was known for her dour Scottish sense of humour but she was also the best coroner in London, by far. ‘So tell me what I need to know,’ said Chalmers patiently. ‘Is this the body of Jack Nightingale?’

MacDiarmid flicked a sheet of paper over and stared at the sheet under it. ‘No question,’ she said. ‘We fast-tracked the DNA analysis and compared it with the sample you gave us. There’s no doubt.’

‘And cause of death?’

MacDiarmid opened her mouth to say something sarcastic but she saw from the look on the superintendent’s face that he wasn’t in the mood so she studied her report instead. ‘The fire was the actual cause. There was smoke and fire damage to his lungs so he was alive when the fire started. But he was in no state to get out. Someone had clubbed him over the back of the head with the proverbial blunt instrument.’

‘Any thoughts as to what that might have been?’ asked Chalmers.

‘A hammer, possibly. Something circular and metallic. Three distinctive blows. Two at the back of the head and one more on the top.’

‘So someone hit him twice and then again on the top of his head as he went down?’

‘I would say so, yes,’ said MacDiarmid. ‘The fire was presumably started in an attempt to dispose of the body.’

‘That sounds about right,’ said Chalmers. ‘The body was found in a burned building and the arson investigator thinks that the fire started in the room where the body was found.’

‘And they found the accelerator, of course?’

MacDiarmid nodded. ‘It was poured over him, no doubt about that. Someone wanted to make sure he burned. They probably assumed that he was dead already.’

‘But there’s no doubt about the ID?’

‘There’s no mistake with DNA,’ said MacDiarmid. ‘Back in the day when we needed fingerprints and dental records then a good fire might well have made identification impossible, but these days you’d have to reduce a body to ash and a petrol-based fire isn’t going to do that. You’d need a crematorium furnace.’ She looked over at him and raised her eyebrows. ‘Was he one of yours?’

‘I’m sorry,’ said MacDiarmid. ‘Do you have any suspects?’

Chalmers shook his head. ‘Place was burnt to the ground pretty much so there’s not much evidence to go on. He had more than his fair share of enemies and we’re working through his client list.’

The doors to the post-mortem room opened and a young man in a blue suit mimed holding a phone to his ear. ‘Call for you, Leslie,’ he said.

MacDiarmid patted Chalmers on the shoulder. ‘I have to take this, it’s about a suicide we had last night.’

As she left, Chalmers stared down at the burned corpse chewing thoughtfully. Eventually he sighed and shook his head, almost sadly. ‘Well, Jack, I always said you’d burn in Hell. Looks like I wasn’t far off the mark.’

T
he church service had been straightforward enough. A few hymns, a couple of prayers, and three readings. Jenny McLean had given the third reading, brushing away her tears with a lace handkerchief as she spouted some nonsense about death being a beginning and not an end. Twice she looked down from the lectern and caught Nightingale’s eye and he had smiled encouragingly. Nightingale sat towards the back of the church. The irony wasn’t lost on him that the man being lauded in the picturesque sixteenth-century church with its steepled bell tower and religious stained-glass windows was a confirmed Satanist who Nightingale was fairly sure had long ago sold his soul to a demon from Hell.

There were more than two hundred mourners crammed into the church. Plenty of famous faces were dotted around including three Members of Parliament, two newspaper editors, and writers, actors and television personalities who regularly appeared in the glossy Sunday supplements. Marcus Fairchild had been a truly evil man but he’d had a lot of friends.

Several times during the service Nightingale had noticed a group of men in the front pews turning around to look in his direction. There were half a dozen of them, big men in black suits, with greying hair and hard eyes. They were sitting together but barely spoke to each other and didn’t appear to be singing or praying.

Jenny was sitting on the right-hand side of the church, in between her mother and father. Nightingale didn’t know if Fairchild had any family, as far as he knew he wasn’t married and didn’t have children. It looked as if Jenny was the only mourner still in her twenties, the majority seemed to be aged fifty and older. Grey hair, parchment skin and watery eyes were the norm.

Once the ceremony was over, the six men who had been sitting close to the front acted as pallbearers and carried the coffin outside. As they walked by, two of them turned to stare blankly at Nightingale. The mourners filed after the coffin, starting from the front pews and working backwards. By the time it was Nightingale’s turn to join the procession, the coffin was at the graveside and the vicar was preparing to speak again, the wind ruffling the pages of the Bible in his hands.

Nightingale stood at the entrance to the church and watched as the pallbearers used thick green ropes to gently lower the coffin into the ground. Jenny was standing to the right of the vicar. She’d obtained a yellow flower from somewhere and was holding it to her chest. Standing behind her was her father, James, a big man with an expensive tan and short curly hair. He had his arm around his wife, Jenny’s mother. Melissa McLean was in her early forties, a decade or so younger than her husband and had the look of a former model – soft, glossy blonde hair and high cheekbones. Her eyes were red from crying and she kept resting her head on her husband’s shoulder. They were standing close to two other people that Nightingale recognised – Marc Allen, overweight with several chins and drooping eyelids, and his much younger and prettier wife, Sally. Also among the mourners Nightingale saw Lesley Smith, a Channel Four newsreader who had just had her first novel published, and Wendy Bushell, a sixty-something woman with shoulder-length grey hair who worked for the billionaire George Soros. He had met them once at a dinner with Jenny’s parents. Marcus Fairchild had been at the same dinner. Standing some way behind them was a white-bearded man with red veins threaded through his bulbous nose. Lachie Kennedy was the gamekeeper on the estate owned by Jenny’s parents. Kennedy was with a white-haired woman who was clutching a black handbag to her chest. Nightingale had never met her but he assumed it was Kennedy’s wife.

The vicar was in full flow now. The wind helped carry his voice over to where Nightingale was standing but the words were unintelligible. Jenny held the flower up to her lips and kissed it softly. Nightingale knew she was going to toss it into the grave and he had a sudden urge to run over to her, grab the flower and tell her the truth about her godfather, that Marcus Fairchild had been a member of a Satanic group that believed that sacrificing children was the way to amass power and money and to guarantee a place at Satan’s side in the fires of Hell. She wouldn’t believe him, of course. Who in their right mind would? Marcus Fairchild had been a family friend from before she was born, and his death had hit her hard. Her parents wouldn’t believe him, either. The only people who would believe Nightingale would be those mourners who were also in the Order of Nine Angles and they were all sworn to secrecy.