Read Late in the Day Online

Late in the Day 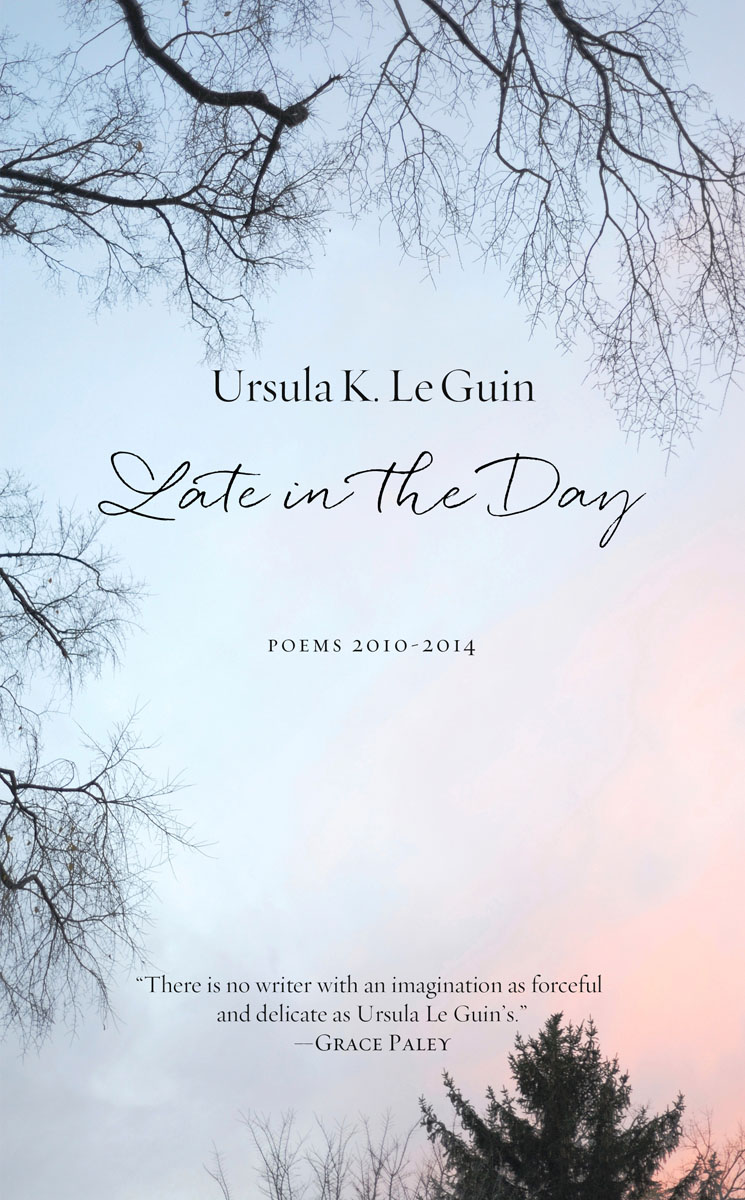 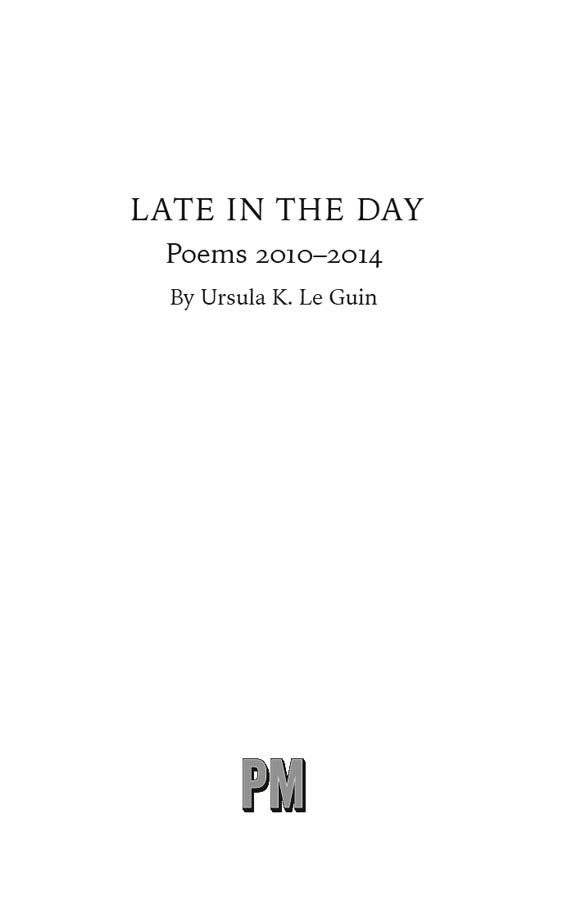 Late in the Day

“Crossing the Cascades” first appeared in
These Mountains That Separate Us: An East/West Dialogue Poem
, Traprock Books, 2012.

“The Small Indian Pestle” appeared in
Windfall
as “The Small Yoncalla Pestle” in 2014.

“Hymn to Aphrodite” appeared in
Prairie Schooner
in 2015.

Printed in the USA by the Employee Owners of Thomson-Shore in Dexter, Michigan.

The Small Indian Pestle at the Applegate House

The One Thing Missing

Geology of the Northwest Coast

Written in the Dark

Definition, or, Seeing the Horse

Given at the conference “Anthropocene: Arts of Living on a Damaged Planet” at UC Santa Cruz, May 2014, this short talk sums up ideas that many of my poems of the last few years have expressed or have been groping toward.

I heard the poet Bill Siverly this week say that the essence of modern high technology is to consider the world as disposable: use it and throw it away. The people at this conference are here to think about how to get outside the mindset that sees the technofix as the answer to all problems. It's easy to say we don't need more “high” technologies inescapably dependent on despoliation of the earth. It's easy to say we need recyclable, sustainable technologies, old and newâpottery-making, bricklaying, sewing, weaving, carpentry, plumbing, solar power, farming, IT devices, whatever. But here, in the midst of our orgy of being lords of creation, texting as we drive, it's hard to put down the smartphone and stop looking for the next technofix. Changing our minds is going to be a big change. To use the world well, to be able to stop wasting it and our time in it, we need to relearn our being in it.

Skill in living, awareness of belonging to the world, delight in being part of the world, always tends to involve knowing our kinship as animals with animals. Darwin first gave that knowledge a scientific basis. And now, both poets and scientists are extending the rational aspect of our
sense of relationship to creatures without nervous systems and to non-living beingsâour fellowship as creatures with other creatures, things with other things.

Relationship among all things appears to be complex and reciprocalâalways at least two-way, back-and-forth. It seems that nothing is single in this universe, and nothing goes one way.

In this view, we humans appear as particularly lively, intense, aware nodes of relation in an infinite network of connections, simple or complicated, direct or hidden, strong or delicate, temporary or very long-lasting. A web of connections, infinite but locally fragile, with and among everythingâall beingsâincluding what we generally class as things, objects.

One way to stop seeing trees, or rivers, or hills, only as “natural resources,” is to class them as fellow beingsâkinfolk.

I guess I'm trying to subjectify the universe, because look where objectifying it has gotten us. To subjectify is not necessarily to co-opt, colonize, exploit. Rather it may involve a great reach outward of the mind and imagination.

What tools have we got to help us make that reach? In
Romantic Things
Mary Jacobus writes, “The regulated speech of poetry may be as close as we can get to such thingsâto the stilled voice of the inanimate object or the insentient standing of trees.”

Poetry is the human language that can try to say what a tree or a rock or a river
is
, that is, to speak humanly
for it
, in both senses of the word “for.” A poem can do so by relating the quality of an individual human relationship to a thing, a rock or river or tree, or simply by describing the thing as truthfully as possible.

By replacing unfounded, willful opinion, science can increase moral sensitivity; by demonstrating and performing aesthetic order or beauty, poetry can move minds to the sense of fellowship that prevents careless usage and exploitation of our fellow beings, waste and cruelty.

Poetry often serves religion; and the monotheistic religions, privileging humanity's relationship with the divine, encourage arrogance. Yet even in that hard soil, poetry will find the language of compassionate fellowship with our fellow beings.

So hills and valleys into singing break,

And though poor stones have neither speech nor tongue,

While active winds and streams both run and speak,

Yet stones are deep in admiration.

RELATIONS
The Small Indian Pestle at the Applegate House

worn river-smooth all round, a cylinder

with blunt round ends, a tool: you know it when

you feel the subtle central turn or curve

that shapes it to the hand, was shaped by hands,

that held it here, just where it must be held

to fall of its own weight into the shallow bowl

and crush the seeds and rise and fall again

setting the rhythm of the soft, dull song

that worked itself at length into the stone,

so when I picked it up it told me how

to hold and heft it, put my fingers where

those fingers were that softly wore it down

to this fine shape that fits and fills my hand,

this weight that wants to fall and, falling, sing.

The match-flame held to the half-inch block

catches, and I blow it out.

The flame grows and flashes

gold, then shrinks and almost dies

to a drop of spectral blue

a wisp of fire in air, dances

high, a little higher, is gone.

from the incense smouldering

My spoon of Spanish olive wood

from the Olive Pit in Corning,

is light but has a good heft.

the right size to stir with,

it's at home in my hand.

its grain is clear and fluent.

The grain of a wood

is the language of the tree.

I oil the spoon with olive oil

and it tells me grey-green leaves,

Spain that I have never seen.

is from our first apartment,

on Holt Avenue in Macon,

with her furniture and kitchenware.

plain, with a good balance,

the left side of the end of the bowl

by decades, maybe a century,

of a right-handed person

mixing and beating with it.

First Mrs Killian, then me.

I liked it so well that when we moved

I asked her could I take it.

That old thing? My goodness, yes,

with a soft laugh,

take it if you want it, child.

stands in the slight hollow of the snow

melted around it by the mild, long

heat of its being and its will to be

Rootless and restless and warmblooded, we

blaze in the flare that blinds us to that slow,

now as in the seedling two centuries ago.

the despised and rejected

because nothing else grows here.

They're the ones who won't give in

to us, ornament our garden,

be furniture, or food,

and firewood only in a pinch

because nothing else grows here.

Theirs is the dour hardihood

Growing Up Laughing: My Story and the Story of Funny by Marlo Thomas
Regency Debutantes by Margaret McPhee
The Sallie House Haunting: A True Story by Debra Pickman
Wearing the Cape 4: Small Town Heroes by Marion G. Harmon
Wild Boys - Heath by Melissa Foster
Chocolate Dreams at the Gingerbread Cafe by Rebecca Raisin
Varius: #9 (Luna Lodge) by Madison Stevens
Patente de corso by Arturo Pérez-Reverte
The Professor and the Prostitute by Linda Wolfe
Forrest Gump by Winston Groom
Our partner