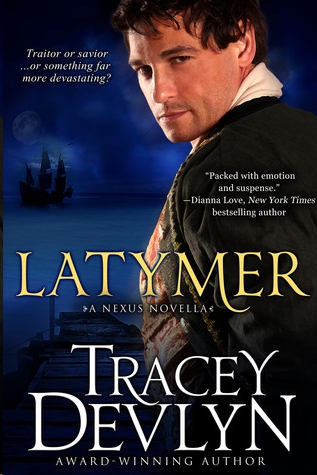 William Townsend—Lord Latymer—lost the woman he loved because of his greed and his ultimate deception of two powerful countries. Now, he must protect his nine-year-old son from the same fate. Latymer has only one chance to escape his enemies: board a ship that would carry them both to America and a new life. But first he must find his missing son, elude a vengeful grieving brother, and kill a beautiful French assassin. Time is slipping through his fingers and Latymer has twelve hours before his ship and his future sail away.

All rights reserved. By payment of required fees, you have been granted the
non
-exclusive,
non
-transferable right to access and read the text of this eBook. No part of this text may be reproduced, transmitted, downloaded, decompiled, reverse engineered, or stored in or introduced into any information storage and retrieval system, in any form or by any means, whether electronic or mechanical, now known or hereinafter invented without the express written permission of copyright owner.

For my fabulous readers—

Thank you for your support

Spies, war, and peace are as bound together as romance novels, chocolate, and pajamas. For centuries, spies have been a major part of military and social conflict around the world.

At the beginning of the Napoleonic Wars (1803–1805), Britain faced the constant pressure of a French invasion. Communication was cumbersome, and there was no instantaneous intelligence gathering as there is today. Governments received information on their enemies through written letters and verbal communication. The most critical information was obtained through large networks of spies.

This tense and dramatic time period seemed like a fantastic setting for a romantic spy-thriller series. Thus, my elite group of secret service agents, aka Nexus, was born.

In this novella, and in the other books in the series, the fictionalized Nexus group is a secret division of the Alien Office—a government department that
did
exist at that time. The Nexus series provides a fictional account of events that took place in 1804, the year Napoleon Bonaparte crowned himself emperor of France. It was at this time that Napoleon began making significant preparations to invade Great Britain.

War makes good people do bad things. Writing about the Nexus made me stop and think about how far I would go for love of country and family. It’s a question I’m still asking myself.

“Press your back against the building, Giles, and stay out of sight.”

Once his son complied, William Townsend—Lord Latymer—tightened his grip on the knife he held and peered around the corner of the building. The front of the large Mayfair town house came into view. Deep shadows surrounded Somerton House, transforming its redbrick facade into every shade of gray.

But Latymer didn’t need daylight to scent out a spy—each had their own special aroma. His years of overseeing the Alien Office, a little-known division of the Foreign Office, had given him the necessary tools to smell the Nexus agent long before he spotted him.

Near Lord Somerton’s town house, soft lamplight fell upon a young, blond-haired man slumped against a tree. Everything about him—frayed breeches, overlarge coat, and askew hat—foretold of desperate times, of countless defeats, of lost dreams.

Everything except his eyes. His eyes searched, scanned, and assessed the area with a keenness that belied his low circumstances. Although Latymer couldn’t be certain from this distance, he guessed the spy served the Nexus, a secret service division of the Alien Office. Doubtless he had been sent to watch over Somerton, the powerful under-superintendent of the Alien Office. Somerton. Latymer’s former friend and colleague.

Even with the recent attempts on Somerton’s life, Latymer was somewhat shocked to find an agent guarding the spymaster. His old friend knew a hundred different ways to kill a person and would chafe at the idea of using Nexus resources for his own benefit.

Perhaps the Ashcroft woman and her little girl had something to do with Somerton’s change of heart. Somerton would not normally bother with such protective measures for himself, but for the woman he loved…

But what the spy was doing and whom he worked for mattered little. Both the French and British authorities wanted Latymer dead. He had failed each government in very different ways, and now they sought retribution. His sins would not go unpunished.

Eyeing the spy, he scraped the pad of his thumb over his knife, testing its sharpness. Not perfect, but it would do. The wonderful thing about human flesh was its pliability. Even the dullest steel could cut deep enough into a man’s throat to reach the killing artery, though it wouldn’t be swift or painless.

He glanced down and took in his nine-year-old son’s wary stance and the restless shift of his big green eyes. Lydia’s eyes. So much about Giles reminded Latymer of the boy’s mother—his shy smile, his mahogany-tinted hair, his intelligence. Latymer’s jaw clenched against the pain wrought by the reminders of his lover’s beautiful image. If only he’d found Giles earlier, he could have saved Lydia from a French assassin’s blade, and the three of them would have been well on their way to a new future by now.

But he hadn’t, and now the strength of two nations bore down on him.

Bending his knees, Latymer slid down the rough stone wall until he was at eye level with Giles. His son clutched a cup and ball to his chest—a toy he’d refused to leave behind at Abbingale when Latymer had rescued him from the hellish boys’ home not but an hour ago. The subtle signs of his son’s distress caused his heart to constrict to the point of pain. He shoved emotion aside. He had to focus. He had to keep Giles safe and ignore all else.

Latymer lowered his voice. “This is Charles Street. A few houses from where we’re standing is a four-story redbrick home with a white door and the number thirty-five. Now repeat.” From the moment Giles could speak in complete sentences, Latymer had played the “repeat” game with his son. Knowing the dangers of life in London, Latymer wanted to ensure his son was always keenly aware of his surroundings. Better to prepare than not. Now he was glad the game was proving its worth.

Latymer snaked an arm around his son, pulling the boy into his warmth. “Four-story
redbrick
home.”

“Very good, Giles. In a few seconds we’re going to emerge from our hiding place and stroll down the pavement as if it were three in the afternoon rather than bedtime. Your job is to memorize everything you see between here and there. Understood?”

His son started to nod, then changed his mind and shook his head.

Latymer strove for calm, but the passage of time wore on his every nerve. In two hours
The Gladys
would set sail—with or without them. They couldn’t afford to miss the ship, for the next one wouldn’t leave port for over month. Surviving another month in such close proximity to two powerful enemies would be virtually impossible.

“If something happens and we’re separated—”

“Keep your voice down,” Latymer said in a harsher tone than he’d intended.

Giles flinched, and Latymer’s jaw clenched at the small sign of his son’s fear.

“I will do everything within my power to keep us together. However”—his voice grew more serious—“the unexpected can happen, and I want to make sure you know where to go if ever you need help.”

“I won’t go back to that place,” Giles said with uncharacteristic defiance.

This time it was Latymer’s turn to flinch. The French had kidnapped and hidden Giles away, compelling him—and Latymer’s gentle Lydia—to bring them a list of Lord Somerton’s secret service agents. Latymer knew Somerton wouldn’t even share the names of his agents with his colleagues at the Alien Office much less jeopardize the agents’ safeties by putting their names to paper.

But the French agents would not listen to reason. Nexus had done much to prevent Bonaparte from invading Britain’s shores, costing the emperor a good deal of time, money, and resources. Bonaparte wanted Nexus eradicated, and his followers desperately wanted to please their emperor.

Latymer knew there was only one way his little family could survive the demands of the French and that was by removing the only leverage they had—
Giles.
He’d finally tracked down his son at Abbingale Home for Displaced and Gifted Boys, where a French schoolmaster used boys as political pawns. After they had served their initial purpose, the bastard sold the boys to generate more revenue for the emperor. Thinking about how close he’d come to losing Giles to such a fate made his stomach heave.

“No, you won’t go back to Abbingale,” Latymer assured him. “You’ll come back to this safe house.”

“A place where no one will harm you. If we should get separated, you find your way here to thirty-five Charles Street, Somerton House. Lord Somerton is a friend.”
Was a friend.
“He will keep you safe until I can come for you. Now repeat.”

“Exactly right.” He squeezed his son’s side in approval, then stood. “Remember, Giles, you must memorize everything. Keep your chin up and your eyes sharp.”

Just What Kind of Mother Are You? by Paula Daly
Kiss Mommy Goodbye by Joy Fielding
Children of God by Mary Doria Russel
Big is Beautiful by Martin, Kelly
Huntbound (Moonfate Serial Book 2) by Frost, Sylvia
The Biker's Heart by Meg Jackson
Un-Shattering Lucy (The Lucy & Harris Novella Series) (Volume 4) by Terri Anne Browning
Cover Up by KC Burn
Jack by Liesl Shurtliff
The Rising by Kelley Armstrong
Our partner