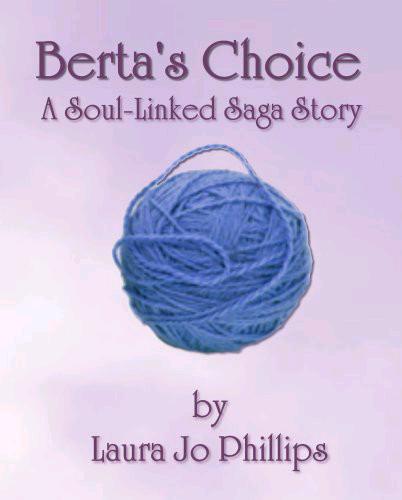 For my family.  Thank you for putting up with my long hours, the cancelled family movie nights, shopping trips, get togethers and occasional melt downs.

For my husband.  Thank you for your constant support, your hours of knocking your head against a wall as you struggled to master the website, the blog and the oh so incomprehensible facebook page.  Not to mention the frequent brain-storming sessions, research requests, and hefty editing tasks.

For Mom.  My best friend, biggest fan, constant supporter, and the best listener ever, not to mention the best Mom anyone could ever ask for.

I love all of you, and appreciate each of you every single day.

Look for previews and coming release announcements at:

Other Books by Laura Jo Phillips

Book One of the Soul-Linked Saga

Book Two of the Soul-Linked Saga

Book Three of the Soul-Linked Saga

Book Four of the Soul-Linked Saga

Book Five of the Soul-Linked Saga

Quest for the Moon Orb

The Orbs of Rathira, Book One

Visit the home of the Soul-Linked Saga online at:

or email Laura Jo at:

Berta Simms sat on the sofa in the Bearens’ living room, listening with only half of her attention to the conversation between Hope and the Alverian Empath, Talinka.  Berta had never heard of an Alverian, let alone seen one, and she was fascinated by the woman’s appearance.  She looked very much like a petite human woman with very white skin, until you noticed that her bright green eyes were a bit too large, and that she had equally green feathers on her head instead of hair.

Berta reached into the small bag beside her and took out her knitting.  Thanks to Doc, the arthritis that had plagued her for so long was now healed, allowing her to take up knitting again after her many years of imprisonment.  It was difficult sometimes to remember that sixty years of her life, her entire adulthood, had been spent trapped in a house surrounded by a hundred miles of barren desert.  Most of those years she had spent alone, and she often wondered why it hadn’t driven her mad.  Maybe it had, she thought, and she just didn’t realize it.

Because of Hope, and three other women, she was now free.  She was also 82 years old and, without the benefit of modern medicine to hold back the ravages of time on the human body, she looked every minute of her age.  She was wrinkled, bent, and white haired, her hips so deteriorated that she had to walk with a cane, her knees not much better.  But she didn’t care.  Being free and safe were all that mattered.

Doc had told her that he could replace her hips and her knees, and she was thinking about it.  For the moment, she was content to help Hope with her three young sons, walk in the garden whenever she felt like it, and meet new people from exotic places, like Talinka.  And knit.

“I am happy that everything worked out so well for you, Hope,” Talinka said after Hope finished filling her in on the highlights of her past few months.

“Thanks, Talinka,” Hope said.  “It’s been an interesting journey, and in many ways a very sad one.  But now that it’s over, I have to say that I couldn’t be happier.”

Talinka smiled and reached over to pat Hope gently on the hand.  “It is difficult to lose those we care for, but we must accept our losses, and continue our lives without them.”

Hope nodded, but had no comment to make.  She often thought of her cousin Harlan, and Ellicia, parents of the baby boys she and the Bearens had adopted as their own, and Grace, her beloved friend.  Not a day went by that she didn’t think of them.  But she did not forget to celebrate her own life each and every day.

“I spoke with Prince Garen about you after you left Bride House, and about the other women who seemed different,” Talinka said, changing the subject.  “I told him that I suspected you were Arimas, and he agreed with me.  Since then, the Council has developed a genetic test to identify potential Arimas, but there are some ethical issues with that.”

“Yes, so my guys have told me,” Hope replied.  “Arimas are so important to the Jasani, but at the same time, they don’t want to take advantage of the women identified as
berezi
.”

“I understand that they are keeping the results of the tests secret, which is wise,” Talinka said.  “I do worry for those women who learn that they are
berezi
, and actually want to find their Rami.  If they announce their status, they leave themselves wide open to the Xanti.”

“Yes, it’s a problem,” Hope agreed.  “Nobody’s quite figured out what to do about it though.”

“That’s easy,” Berta said as she continued to knit.  “They need their own place, like Bride House.”

Hope and Talinka looked at Berta in surprise.

“That’s an excellent idea, Berta,” Talinka said.  “Bride House is not secure enough though.  Making any place secure against the Xanti would be a problem.”

“You’re right,” Hope said.  “This is clearly the safest place on all of Jasan.”

“We’d have to clear it with the Dracons, of course,” Talinka said thoughtfully.  “And we’d have to find someone to run it.  I cannot abandon Bride House.  I am needed there.”

“I would like to do that,” Berta said quietly.

Again Hope and Talinka stared at Berta in surprise.

Berta set her knitting aside and met the other women’s gazes as she considered her answer.  “First of all, it would give me something worthwhile to do,” she said.  “Second, I have spent most of my life alone, and I would relish the opportunity to be surrounded by other women.  And third, there is no specific ability required for the task.  A woman is either an Arima for a male-set, or she is not.  Period.”

“I know that I’m old, and I know that I’m no good for most jobs,” Berta said.  “But I can chaperone as well as anyone.  After all, the men come in, sniff around, and either find their Arima, or don’t.  Easy.”

Hope and Talinka both grimaced.  “That sounds a little...crude,” Hope said after a moment.

Talinka studied the older woman for a long moment.  She’d been shocked by Berta’s appearance when Hope had introduced them a short while earlier.  She’d never seen anyone who looked like Berta and had, at first, thought she was the victim of some strange disease.  A few carefully worded questions and answers had told her all she needed to know.  Berta Simms’ appearance was the result of extreme aging in humans without benefit of age controls.  The saddest thing about Berta, and the most extraordinary, was that she had spent the better part of her life as a captive, and yet was not filled with anger or sorrow about it.  She regretted it, and she certainly had some leftover trauma because of it.  Even so, her current state of freedom was far more important to her.  She enjoyed each moment of her life now, and took nothing for granted.

“I think that’s a very good idea,” Talinka said.  “You would need good staff support, but I agree that the position would not require the empathic abilities that Bride House needs, and that you would be well suited to the position.”

Berta smiled her thanks and took up her knitting once more.  “Thank you, Talinka,” she said after a moment.

“Do not thank me yet,” Talinka said with an answering smile.  “I must first discuss the idea with the Dracons, and get permission from them to build an establishment here on the ranch.”

“I don’t see them vetoing the idea,” Berta said.  “It’s the safest place for
berezi
, and they will want such women to be as well protected as possible.”

“That’s true,” Hope said.  “We will also need to make certain that the women themselves are assured of their own rights.  They must not be forced to join their lives to a male-set against their will, Arima or not.”

“Do you think it likely that such an event will come to pass?” Talinka asked in mild surprise.

“No,” Hope replied.  “But anything is possible, and personalities might clash regardless of fate’s designs.  If a male-set dislikes the one woman meant for them, they have the option of not linking with her if they choose.  It is only fair that the woman have the same option.”

“If a male-set chooses not to mate with their Arima, they also choose to live out their lives alone,” Talinka pointed out.  “It would be a hard choice to make.”

““Hard or not, it is still their choice,” Hope insisted.  “The woman must have the same right of choice as the males.”

“Agreed,” Talinka said, though she thought it was a moot point.  What woman, or man, would choose to defy fate?  She glanced at her watch and sighed.

“I’m afraid my time is up,” she said to Hope.  “My ride will be waiting to take me back to Badia.”

“You aren’t going to try to speak with the Dracons today?” Berta asked, trying to hide her disappointment.

“The Dracons aren’t here today,” Hope said.  “They had to go to Berria, remember?  They were going to bring Salene, Rayne and Tani over this afternoon, but had to cancel.”

“That’s right, I’d forgotten,” Berta said with a sigh.  The loss of dexterity, mobility, and even mental acuity had been difficult to accept, but it was the loss of short term memory that bothered her most.  She reminded herself how lucky she was to be sitting here, in the Bearens’ living room and smiled to herself as she continued knitting.

“What about the Lobos?” she asked, smiling at the thought of their three little girls.  Varia, Marian and BreeAnna were her favorites, though she would never say so aloud.  The Dracon princesses were adorable too, she just thought the Lobos were cuter with their blue hair and sweet, dimpled cheeks.

“Yes, Saige is still coming with Varia, Mari and Bree,” Hope assured her, aware of Berta’s preference no matter how she tried to hide it.

“Do you have any psychic abilities, Berta?” Talinka asked.  As soon as the words were out of her mouth her white skin blushed a deep peach color.  “I apologize,” she said quickly.  “I should not have asked such a personal question.”

Berta waved one hand and shrugged.  “I don’t mind,” she said.  “I do have a small ability for disrupting electronics.  Nothing big, I assure you.  I can destroy a vox or vid terminal if I’ve a mind to, but not much more than that.”

Talinka cocked her head to the side.  “Is that all?”

“That’s all that I’m certain of right now,” Berta replied.  “I have a suspicion or two that there might be another ability I’m only just discovering, but I’m not sure just yet so would prefer not to speak of it.”

Talinka nodded her understanding as she stood up.  After saying her goodbyes and promising to make an appointment with the Dracons as soon as possible, she left the Bearens’ home and headed toward the airfield just outside the garrison.  As she walked she thought about Berta, turning an idea over in her mind.  Her biggest concern was whether she would offend Berta, but in the end, she decided it was worth the risk.

Too Wild to Hold by Leto, Julie
A Possibility of Violence by D. A. Mishani
The Cyber Chronicles VIII - Scorpion Lord by T C Southwell
Romancing the Billionaire by Jessica Clare
Everything He Risks by Thalia Frost
Curtain: Poirot's Last Case by Agatha Christie
Sex, Lies, and Online Dating by Rachel Gibson
The Gardener from Ochakov by Andrey Kurkov
Imager's Challenge by L. E. Modesitt, Jr.
The Unblemished by Conrad Williams
Our partner