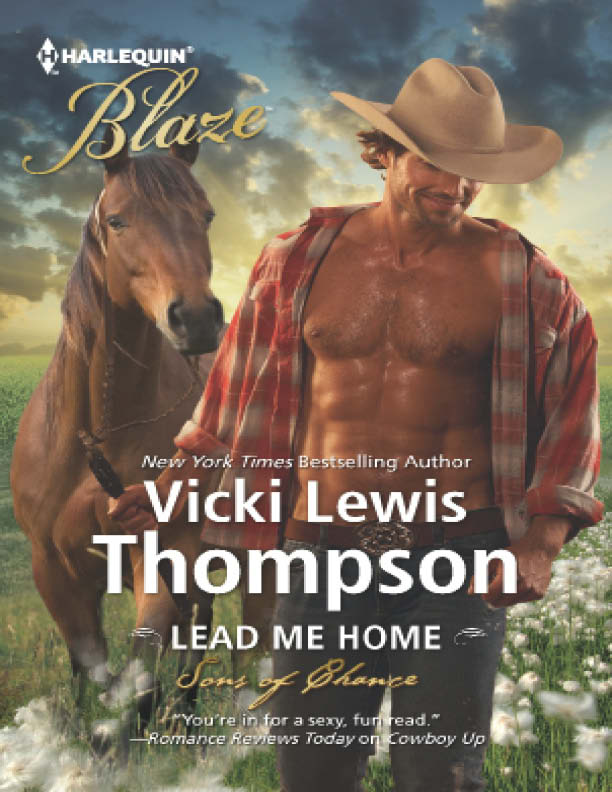 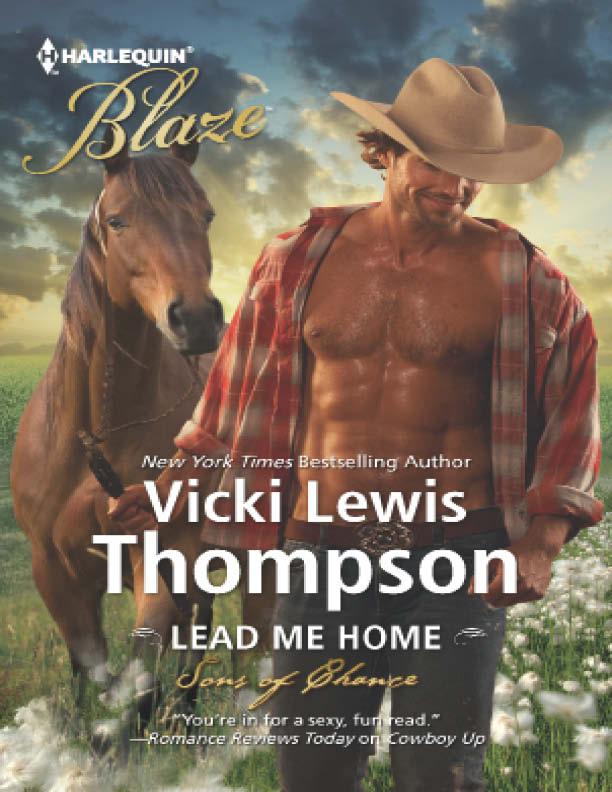 How do you keep a roving cowboy in one place?
Tie him up!

Thanks to his skills with difficult horses, trainer Matthew Tredway has traveled all over the world. And his new gig? The Last Chance Ranch. But after a chance glance at the ranch’s hot little blond cook, Matthew’s libido is immediately set to sizzle!

Chef Aurelia Smith has been trying to tempt the ranch hands with mouth-watering concoctions, with less-than-stellar results. But when Matthew is sent in to intervene, his attraction to Amelia boils over.

Before long, they’re cooking up a storm, in and out of the bedroom. But Aurelia knows that while she might have led her horseman to bed, she can’t make him stay....

Do you need a cowboy fix?

Chance isn’t just the last name of these rugged Wyoming cowboys—it’s their motto, too!

And don’t forget about the ebook prequel,

Take a chance…on a Chance!

I’m no gourmet cook. In fact, not long ago while cooking for friends, I attempted to make green beans with almonds in a baking dish with a glass lid. As I lifted the lid to check the doneness (that’s a technical term known only to experienced chefs), I dropped the lid, which shattered into the beans. My dear guests ate the beans while picking out bits of glass.

Therefore, when I wrote about Aurelia Imogene Smith working away in the Last Chance Ranch kitchen preparing fancy French dishes with ingredients I couldn’t pronounce, you know I was living in a fantasy world. But what’s a fantasy without a cowboy, I ask you? So I brought Matthew Tredway, master horse trainer, right into that ranch kitchen to meet Aurelia.

We’ve all been told that the way to a man’s heart is through his stomach. Must be true, because in no time Aurelia finds her way into Matthew’s heart, but she also manages to lure the rest of him, too. And I have to say, in the interest of full disclosure, that food isn’t the only thing Matthew is interested in.

If you’ve been a faithful reader of the Sons of Chance series—and I hope you have!—you may wonder what Aurelia’s doing in a kitchen normally dominated by ranch cook Mary Lou Simms. Turns out that Mary Lou and Watkins, the ranch hand who was sweet on her, finally decided to tie the knot and are off on their honeymoon.

If that’s news to you, you need to come on out to the Last Chance, sip a cup of coffee on the porch, and catch up on the doings there. I know you wouldn’t want to miss a single thing!

New York Times
bestselling author Vicki Lewis Thompson’s love affair with cowboys started with the Lone Ranger, continued through Maverick and took a turn south of the border with Zorro. She views cowboys as the Western version of knights in shining armor—rugged men who value honor, honesty and hard work. Fortunately for her, she lives in the Arizona desert, where broad-shouldered, lean-hipped cowboys abound. Blessed with such an abundance of inspiration, she only hopes that she can do them justice. Visit her website at
www.vickilewisthompson.com
.

To get the inside scoop on Harlequin Blaze and its talented writers, be sure to check out
blazeauthors.com
.

All backlist available in ebook. Don’t miss any of our special offers. Write to us at the following address for information on our newest releases.

To all the fabulous cooks I’ve known who have fed me terrific food that had the perfect mix of spices, wasn’t either burned or raw, and never had bits of glass in it. I have committed all those sins and more, and suspect it may be time to hang up my potholders and abandon the field.

A
FTER FORTY-FIVE YEARS
of marriage to Nelsie, Archie Chance knew timing was everything, especially when dealing with a touchy subject like food preparation. Nelsie was possessive about her kitchen, always had been. She’d rejected every suggestion to hire some help, but this time, Archie was determined to convince her.

He waited until they’d settled on the front porch for their usual after-dinner cup of coffee accompanied by a look-see at the mountains. Then he pretended his next move was an afterthought. “You know what? I’m gonna get that bottle of Bailey’s and add a little to my coffee.” Setting his mug on the small wooden table between their rockers, he stood.

Nelsie glanced up at him with a smile. “What are you plotting now, Archibald?”

He should have known she’d suspect him of having ulterior motives, but he pretended innocence. “Not a thing. I just like a little taste of Bailey’s in my coffee now and again.”

She didn’t look convinced. “If you say so.”

“Be right back.” He walked inside and grabbed the bottle out of a cabinet he’d built years ago. From upstairs came the familiar sound of his son Jonathan and his daughter-in-law Diana having a row. Little Jack was crying, which any toddler would do if his parents yelled at each other like they had no sense.

Archie considered going up there and fetching Jack, but about that time the arguing stopped and Jonathan headed down the curved staircase holding his son.

“Okay.” Archie watched Jonathan stride out of the house, his back rigid with anger. The marriage was not going well, but Archie wasn’t surprised. Although Jonathan had made an effort because of the baby, he’d never been in love with that woman, and Diana wasn’t easy to love, anyhow. Archie didn’t know how to fix a problem like that.

So he decided to concentrate on the problem he
could
fix, or at least try to. Carrying the Bailey’s, he walked back out to the porch, unscrewed the cap and held the bottle toward Nelsie. “Want some?”

“Think I will, after all.” She held up her mug and he poured about a jigger’s worth into it. She sighed heavily. “I hate it when they fight.”

“Me, too.” Archie doctored his coffee and put the cap back on before reclaiming his rocker. “But they’re the ones who have to figure it out.”

She didn’t have to finish the sentence for Archie to know what she wished—that Jonathan and Diana had been in love when they’d made that baby, so that getting married would have been a joy instead of an obligation. He took a sip of his coffee and was glad he’d added the Bailey’s to soften the sharp edges of reality.

Pretty soon Jonathan came out of the barn leading Scout. He put Jack on first before mounting up and riding slowly across the meadow, holding Jack on the saddle in front of him. In spite of everything, Archie couldn’t help smiling. That kid loved being on a horse as much as his daddy had at that age. Jonathan had tried teaching Diana to ride, but the effort had been doomed from the start.

“The mountains are pretty tonight,” Nelsie said. “I love it when they get that pinkish glow.”

“Yeah, it’s nice.” Gradually Archie’s spirits began to lift, as they always did when he took time to appreciate his surroundings. The view from the porch was spectacular, and he could see it whenever he took the time. Besides that, he had a wife he cherished beyond belief, a devoted son, and the most amazing grandbaby in the world. All in all, he was one lucky SOB.

He’d finished about half his coffee when he decided to broach the kitchen-help idea. At least Nelsie had some Bailey’s in her, which tended to mellow her out a bit.

“I can hear the wheels grinding over there,” Nelsie said. “You might as well spit it out.”

Archie looked over at her and grinned. She always could read him like a book. “All right. You’ve been against this in the past, but we’re feeding quite a few cowhands at lunch these days, and—”

“Archie, you know I hate the idea of a stranger in my kitchen, not to mention the expense.”

“But you’re working yourself to a frazzle.”

1915 Fokker Scourge (British Ace Book 2) by Griff Hosker
The Sweetheart Bargain (A Sweetheart Sisters Novel) by Jump, Shirley
Miss Spitfire by Sarah Miller
Last Chance To Fight by Ava Ashley
Say Nice Things About Detroit by Scott Lasser
The Return of the Manhattan by Lee Ecker
Once a Thief by Kay Hooper
A Month with Werewolves by K Matthew
A Hint of Seduction by Amelia Grey
The Dark Tower IV Wizard and Glass by Stephen King
Our partner