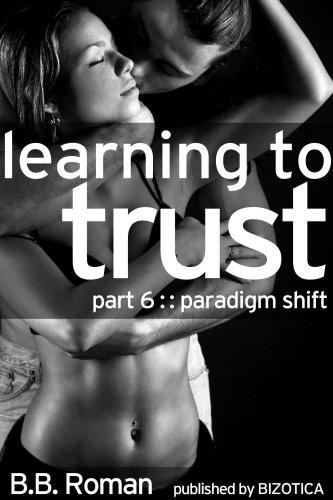 This book is for ADULT AUDIENCES ONLY. It contains many sexually explicit scenes and graphic language which may be considered offensive by some readers. Please store your
eBooks
where they can
not
and will not be accessed by minors.

Oh dear, where do I begin?

I didn't like that Roland was suddenly so furious with me,
his sacred
pet
. I had done what he had suggested, accepting the job and going to my first day of work. Sure, I had wanted it too, but that didn't mean he could just blow up at me like that.

When I got upstairs, I immediately put on my workout clothes and fled to the treadmill to run away my frustrations. Every drop of sweat coincided with another shift in my thinking, another instance of constantly evolving curiosity and planning. I was in a tough situation,
all right
. Should I ask him for the truth? Would he even tell me? Or should I just demand an apology and assume that everything was just in my imagination?

I had seen the office now, and I was going to manage it. Everything looked normal, sterile and obvious. And everyone there seemed to fit that mold as well. Were they all keeping their mouths shut, a whole office of people that perpetuated and covered up huge crimes on a daily basis? Was I going totally crazy for thinking that things I'd heard and seen were tidbits of dark secrets, only absorbed by me in tiny doses?
Oh, Marisa...

Despite feeling a little like I was
in danger—
it was possibly heightened by the adrenaline rush from my running—my curiosity was piqued in a way that almost stung. I realized that if I didn't figure out what was going on, I'd go crazy. I'm sure I could leave today, Roland having the whole departure arranged in less than a minute. But I had submitted to him, opening up to him so that he would do the same to me. I came here to do a story—and stayed for a different reason entirely.

At this point, I needed a plan—and a
shower
.

As usual, I
formulated my plan in that gorgeous
private
bathroom
, going through each step in my mind until I had the whole process refined. I was going to just wait and see what happened, demanding an apology instead of information. Perhaps I'd touch on the seriousness of the visitor, but I wouldn't dig any deeper than that
. Roland might just provide me with something I could chew on in the meantime...

I decided that
I'd
have to
wait for the real information to spill out naturally—if it did at all.
It was more of a passive approach, one that seemed safer given the extreme possibilities if this all went south. Maintaining my role in the relationship seemed like the safest best in more ways than one, rather than acting like a reporter and drawing unneeded attention to myself.

When dinner finally rolled around, I threw on my robe and cautiously crept down the stairs, worried that I'd run into an assassin or something when I reached the main floor. I experienced no such thing, however, and made my way into the dining room. Roland was already there, smoking a cigar.

"Marisa, my pet, I do apologize from before. Just a bit of
business
." He stood up and pulled out my chair for me. "A drink?"

"Yeah," I said. "Whatever." I was trying to give him the impression that I was upset.

He came back from the kitchen with a bottle of wine and poured me a glass. "Only the finest for my pet," he said, smiling unusually large. I maintained my look of neutrality.

His smile faded as he sat back down in his chair. "Ah, yes, I do apologize. Things went awry and although it probably sounds worse than what it is, measures needed to be taken. I'm still tying up loose ends from my father's days."

"Loose ends?" I said, suddenly very curious.
Shit!
I was trying to play the emotionally hurt Marisa, not the one on a quest for truth. "It just hurt my feelings a lot. I was really embarrassed when you yelled at me from the hall."

"I think I know what needs to be done," Roland said, more serious than I'd ever heard him before.

"I need to be punished for my transgressions. Tonight, we'll go to the dungeon and you'll punish me."

Actually, the more that I thought about it, the more appealing it sounded. What was it like to be a Dom? Even though
we had
been doing this for a couple of months now, I still had always been on the receiving end. God, the possibilities...

"Really?" I said. I fought to hold back my smile.
The facade was getting difficult to maintain.

"Absolutely. I think you might find that you enjoy dishing it out as much as you enjoy receiving it. You're a strong girl." His emotions seemed to be evening out now, perhaps calmed by the fact that I wasn't prying into what sounded like it could have been a
murder
. And there was that loud sound downstairs the other day, the sound that he attributed to his uncle.

I was living in such a weird world now.

The mood was lively during dinner as each of us sipped our wine and ate the fine foods served to us. I was used to things like caviar now, despite the fact that I had loathed it at first. Roland insisted that I'd develop a taste for it, and he had been right—I loved it now.
On a daily basis, w
e had beautiful cuts of smoked fish, filet mignon, imported cheeses and chocolates,
and
other decadent desserts and main courses. The list just went on and on. At the very least, it was worth it to stay here just for the food.

The cigar smoking had become somewhat of a new thing for Roland, and although I didn't like smoking, he looked undeniably sexy and powerful with a fine Cuban in his mouth, dipping it occasionally in his cognac.
Cliché
, yet dazzling.

We finished dinner and left the mess to the domestic workers. Roland assured me that he paid them top dollar, so I stopped complaining about having them around. Still, I wasn't fully comfortable with it and I probably never would be. I was used to having to do everything myself, not just passing the responsibility onto someone else—whether they were paid or not.

Roland did a few things in his office and then he gave me a look that said
yes, we'll go now
.

Down into the dungeon we went,
a routine I was intimately familiar with. When we got into the main room, I walked right up to the St. Andrews cross and prepared to be restrained.

"No, my pet," Roland said, correcting my behavior. "I will take your place tonight."

"Oh yeah," I said. I felt kind of dumb, operating on one-hundred percent routine rather than our adjusted schedule. "Take off your robe and face the cross," I said. His robe dropped to the ground, revealing his chiseled nude body. I loved that firm butt of his and looked forward to
defiling
it.

He placed his arms against it and allowed me to secure them into place, one by one. I fumbled with the restraints for far longer than I should have given my extensive experience with them. Still, I was always being restrained, not doing the restraining. This was a significant switch.

When it hit me what I was doing—tying up one of the most powerful men in the world so I could have my way with him—I felt a warmth in my core, a heat that spread from my lower belly until it spilled between my legs and resulted in moisture there. I was giddy, like it was the first day of school or something.
What would I do to him?

"Go as far as you'd like for the scene," Roland said.

"I can do whatever I want?" I asked, suddenly realizing the extent of my power. I bent down and secured his feet to the base of the
cross.

"Hey! That's going to get you in some trouble." I took a step back and dropped my robe, my naked body facing the man that usually did what he wanted with my own. I walked over to the area that housed most of our toys and grabbed the wooden paddle. "You've been a bad slave," I announced upon my return.

"Master!" I demanded.
Who was this talking?
I didn't know, but I liked her. I spanked his cheek hard with the paddle, the
high-pitched
slap echoing throughout the dungeon. I saw every muscle in his body tense as he braced for my next move.

"That's right!"
Thwack!
I hit him again, this time even harder. I cringed when I heard his groan, worried I was really hurting him. I felt my Dom character fading away. "Roland, are you okay?" I whispered.

"Pet, I'm just fine. I'm no stranger to this, I promise. My safe word is blue. If you hear it, you must stop. Have your fun now."
The words sputtered out rapidly with no pauses between the sentences.

I took a deep breath and lifted my arm into the air. I struck him three more consecutive times. "Bad slave!" I cried out between each repetition. His skin was flushed red, obviously stinging. Still, he fought to control his groans, his arms flexing tightly as he gripped the restraints for stability.

Satisfied with the outcome of the paddle, I set it down and grabbed the whip. I struck him two times rapidly, surprising him.

"Oh god, oww!" he cried o
ut. I needed to ignore his whines of pain
unless he delivered the safe word
, as hard as that could be
. That was how we always operated down here, an agreement that we both were required to honor for this to work at all.

I whipped his thighs and each cheek of his buttocks, alternating sides and locations with each strike of the whip. Yes, I knew how much it hurt because of how many times he had used it on me. "Alright, slave," I said. "You get a little break."

"Thank you, Master," he said. I grabbed a bottle of lube and stepped toward him, covering my fingers as I went. When I bent down, I could see his semi-flaccid cock hanging between his legs. I took it tightly in my fingers, covering it with lube until I could barely maintain my grip.

From that compromised angle, I pumped my non-dominant left hand up and down him until he was fully erect, hungrily watching his body p
ulse as I stroked
. "Oh yes, Master," he whined. "Thank you."
His body rose and fell with the movements of my fingers.