Led Astray by a Rake 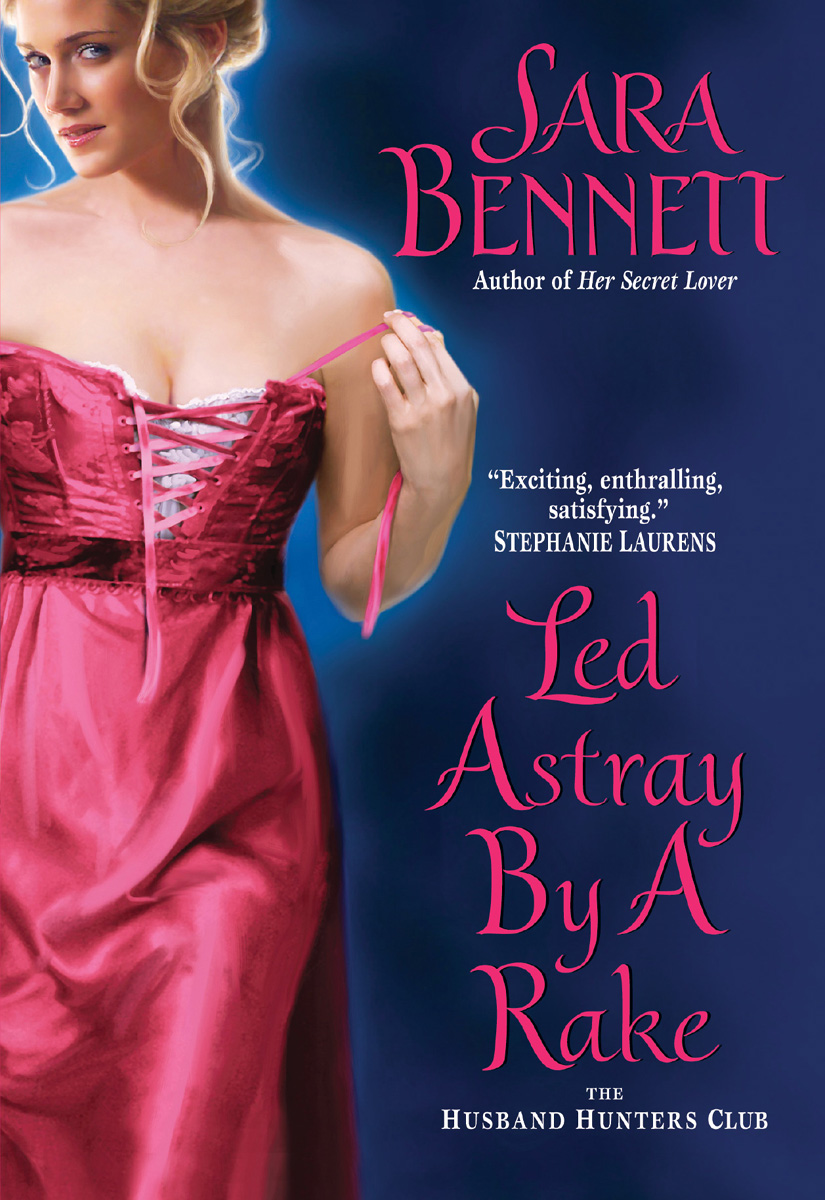 This book comes with a thank-you to my friends, writing and nonwriting, who keep me sane when times are tough, and who put up with long silences on my part while I’m writing. This one is for you!

The ballroom was a kaleidoscope of color. Young girls and…

Olivia held her hands tightly folded at her waist, refusing…

Nic wasn’t pleased. He was irritated and annoyed, mostly with…

Olivia grimaced, her dress dripping, her slippers squishing, as she…

The parlor was very quiet, apart from the ticking of…

Olivia was glad to be alone. After yesterday’s excitement she…

“I won’t cry, I will not cry,” Olivia murmured to…

Nic, elegant in his black and white evening wear, stood…

Despite what she’d said to him, Olivia admitted it would…

She couldn’t believe it. Well, she could, but she didn’t…

When at last Nic opened his eyes, he found they…

Olivia had never felt so close to anyone in her…

Sleep for Nic wasn’t as easy as it seemed to…

Nic didn’t know where his manservant had gone and he…

When Olivia arrived home she fell into her bed and…

At half past ten that same morning Olivia discovered just…

Nic didn’t know what he’d expected, but it wasn’t this…

Olivia sat on the swing in the garden, disconsolate, in…

Nic swung his leg over the saddle, grimacing at the…

Nic lifted his head, listening. The sounds of running feet…

Bassingthorpe Church bells were ringing. Their sound was sweet and…

Olivia rose quietly from the bed, slipping her shawl about…

Abbot brushed Nic’s jacket with the clothing brush, frowning as…

The following day Olivia went to a meeting of the…

Nic couldn’t keep his eyes off her. When she appeared…

Olivia was shaking inside. A storm of emotion she struggled…

Abbot had been waiting and delayed Nic in the hall,…

The narrow house was neat and respectable, and it stood…

Nic had found Olivia missing in the morning. No one…

Nic had lost her.

The woman came to the door carrying the baby in…

Theodore heard the news as he was sitting down to…

Abbot shivered as he climbed into bed beside Estelle, drawing…

Other Books by Sara Bennett

T
he ballroom was a kaleidoscope of color. Young girls and their families and friends, the staff of the finishing school and its supporters, and a sprinkling of local dignitaries, all in their finery and vying for attention. The girls in particular were dressed to be admired, because these were Miss Debenham’s latest crop of respectable and refined young ladies, ready to be set, like jewels, before the country’s eligible bachelors in the hope that those gentlemen would be dazzled into proposing marriage to them.

That was the object of the exercise, after all. That was why the families had spent good money to send their daughters to Miss Debenham’s Finishing School: to procure a good marriage. The school was renowned for it, and Miss Debenham was known to trot out the names of some of the highest in the land and claim them as her own successes.

Miss Olivia Monteith knew very well what was meant by “a good marriage.” Financial security, respectability, maybe even a title and the chance to raise herself and her family into the aristocracy. Marriage was like any other legally binding contract, written in language that was cold and precise. But nowhere in those close written lines was there any mention of the heart. Of love. Of happiness. Of desire.

“Miss Monteith, how do you do?”

Olivia smiled and replied to the greeting in her usual calm, cool manner, never for a moment betraying her inner agitation.

“I was speaking with your mother, Miss Monteith. She told me you will not long be a miss. Should I congratulate you?”

“No, please don’t, nothing is settled…”

“If you say so.” The smile was arch and disbelieving.

Olivia moved away, followed by the usual murmurs and stares. She was aware she had the kind of beauty that was currently much admired—fair hair and blue eyes and a porcelain complexion. Combined with English reserve and natural restraint, this caused others to believe she was devoid of emotion, almost cold.

Unfortunately for Olivia, this was very far from the truth. Beneath her cool and calm beauty beat a warm, passionate heart. In reality she was a woman who longed to seize life with both hands and live it to the full, with all its ups and downs. She wanted a husband who could share such a
life with her, a man she could love wholeheartedly, and who would love her. She didn’t expect perfection, she wasn’t a fool, but better to be unhappy sometimes than to feel nothing. When she contemplated the future her parents planned for her she felt like a frightened child, because if she was to marry and live without emotion, then she truly would become the ice queen.

Olivia moved on through the crowded ballroom, smiling and bowing her head in acknowledgment to those who claimed her acquaintance, and all the time she was moving ever closer to her real goal. Escape. As she drew nearer to the side door, her heart began to beat harder and she found it difficult to breathe, although no one who did not know her well would ever have guessed her feelings from her demeanor.

She reached the door and slid out into the shadowy corridor, closing it softly behind her. At once the noise was muffled, and the air was blessedly cool against her flushed cheeks. For a moment she stood, simply enjoying being alone, and then with a laugh she picked up her white tulle skirts and began to run swiftly along the passageway in her satin slippers. One of her carefully arranged curls tumbled to her shoulder, another bounced over her eyes. She didn’t stop, climbing a set of narrow stairs toward the very top of the building, and a place where only a very few of Miss Debenham’s girls ever ventured.

The door at the end of a final short flight of steps was closed, but Olivia did not hesitate in open
ing it and entering the little room with its sloping ceiling and single small window. A candelabra covered the scene in soft light, picking out the figures seated in a circle on the floor, their beautiful dresses folded about them, their expectant faces turned to hers.

Olivia knelt down in the space they had left for her, arranging the yards of her expensive dress about her, tucking her truant curls behind her ears. “I couldn’t get away,” she said, and took a deep breath, pressing a hand to her tight stays. “I had to run.”

While most of Olivia’s acquaintances would refuse to accept that she would ever move faster than a ladylike stroll, these were her friends, and they understood. Fondly she looked about her, knowing that here she could be herself.

Miss Clementina Smythe—Tina to her friends—loyal and sweet; Lady Averil Martindale, selfless and good; Miss Eugenie Belmont, daughter of a rackety family; and Miss Marissa Rotherhild, a bluestocking with a wicked smile. They were all of them different, but their dreams and hopes were the same.

Marissa leaned forward, her dark eyes bright. “I bring this meeting of the Husband Hunters Club to order. Who wants to state our aims? Olivia?”

“Very well.” Olivia became serious. “Everyone knows a young lady must marry and marry well, but why shouldn’t the young lady have a say in the matter? We five have sworn to take our fate
in our own hands, and to marry the men of our choice. That is what the Husband Hunters Club is all about.”

“What is our motto?” Marissa declared.

Five voices answered. “The only husband worth having is the husband you hunt yourself.”

“What is our quest?”

“To find the perfect husband and to pursue him with all the feminine weapons at our disposal.”

There was laughter and excitement, until Olivia’s words cut through the froth like a knife. “This is our last night at Miss Debenham’s.”

Silence fell as the girls remembered that the time had finally come for them to leave this safe nest and put their stated plans into action.

“The rest of our lives begins now, and if we don’t want to end up like poor Barbara Jones-Holt, we must fight for our future happiness,” Olivia urged.

There was a silence while they all remembered Barbara Jones-Holt, another of Miss Debenham’s debutantes, who had made a brilliant marriage to a duke, a man old enough to be her father. Barbara came to visit before the wedding, and her eyes were the saddest they had ever seen. Like a trapped bird that knows it has no hope of escape from its cage.

Olivia shuddered now at the memory. “Win or lose,” she said, “we have to try.”

From the heartfelt murmurs of agreement it was clear the others were also remembering poor Barbara.

And then Marissa gave a laugh and the atmosphere lightened. “This is the night we vowed that each of us would name our quarry,” she reminded them with a wicked smile. “The names will be written down in the club book, and when we meet again in one year’s time we will see who has caught the husband of her choice.” She looked about her. “Who will go first? Olivia?”

Olivia leaned forward, her blue eyes shining as she met her friends’ expectant gazes. “Yes, I will go first.”

“Oh Olivia, tell us do, who is your perfect mate?” Tina whispered, holding in a nervous giggle.

Olivia hesitated, wondering if she dared speak aloud the dream she was carrying with her.

But Marissa was having none of it. “Tell us who it is!” she declared impatiently.

Olivia knew now was not the time to be coy, and yet the name on her lips felt dangerous and risqué, and her cheeks grew hot again as she spoke: “I want to marry Lord Dominic Lacey.”

“Wicked Nic?” Tina squeaked loudly, while the reactions of the others ranged from amazement to dismay. Of course, they had all heard of Wicked Nic Lacey.

“He is very handsome,” unshockable Marissa said thoughtfully, “but then most rakes are. It goes with the nature of the beast.” She tilted her head to one side as she observed Olivia. “But I think there must be more to your wanting to marry him than his face.”

“Yes. There is.” Her cool demeanor was dis
turbed, as if a ripple passed over her surface, giving a glimpse of the passion within. The real Olivia Monteith. She smiled, her eyes gleaming with humor and the ability to find something amusing in even dire circumstances, a trait she took great care to keep hidden from all but her closest friends. English society did not appreciate levity in its young ladies.

“When I was ten years old Lord Lacey promised to marry me, and since then I’ve never met another man I liked half as much.”

Appreciative laughter, and Lady Averil gave a mischievous grin. “If anyone can tame Wicked Nic, then I believe it is you, Olivia.”

“And after all, a promise is a promise,” agreed Tina, “even if you were only ten.”

Eugenie produced a bottle of champagne with a flourish. “Compliments of Miss Debenham’s!” Eagerly glasses were held out as she poured the sparkling liquid. “Let us make a toast,” she said.

“To the Husband Hunters Club!”

Their voices lifted with their glasses, while below in the ballroom the graduation went on, the guests and families all innocently unaware that their worlds were about to be turned topsy-turvy.