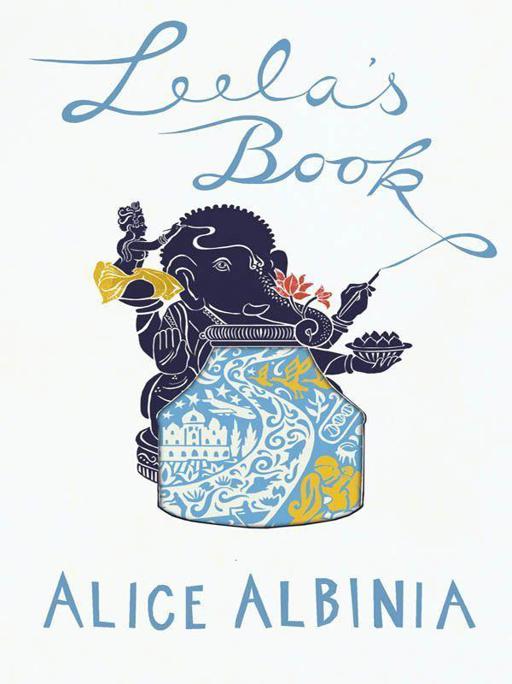 Once, long ago, she had made a promise, and she could not leave India a second time until that promise had been honoured…

Leela – alluring, taciturn, haunted – is moving back to Delhi from New York. She knows her return will unsettle precariously balanced lives. Twenty-five years ago her sister was seduced by Vyasa, a young university lecturer. Now an eminent Sanskrit scholar, Vyasa is preparing for the unlikely marriage of his son, Ash, to the child of a Hindu nationalist. Compounding Leela’s disruptive presence, Ash’s hedonistic twin sister Bharati arrives from London, reluctantly leaving her cosmopolitan university life to see Ash married. Ash, meanwhile, has fallen in love with his brother-in-law to be.

Gleefully presiding over the drama is Ganesh – divine, elephant-headed scribe of India’s great epic, the Mahabharata. The family patriarchs may think they have arranged the wedding for their own selfish ends, but according to Ganesh it is he who is directing events – in a bid to save Leela, his beloved heroine, from his devious enemy Vyasa.

Turning to fiction after an award-winning travel book, Alice Albinia has written a brilliantly playful and genre-defying first novel. Ambitious and entertaining,
Leela’s Book
weaves a tale of contemporary Delhi that crosses religious and social boundaries, reaching back into the origins of the Mahabharata itself.

Born in 1976, Alice Albinia read English Literature at Cambridge, and South Asian History at SOAS. In between, she worked for two years in Delhi as a journalist and editor. Her previous book,
Empires of the Indus
, won the Somerset Maugham Award, the Authors’ Club Dolman Travel Award and the Jerwood/Royal Society of Literature Prize.

ALSO BY ALICE ALBINIA
Non-fiction
Empires of the Indus

‘O elephant-headed god, son of Lord Shiva and Parvati; scribe who wrote down the Mahabharata from the seer Vyasa’s dictation: Lord Ganesh, look favourably on this endeavour.’

Professor Ved Vyasa Chaturvedi paused, looked out across his audience, and smiled. ‘The god invoked at the start of all compositions. What better way to begin?’

A ripple of laughter, fruity and indulgent, washed pleasantly through the room – and Vyasa knew at once that the audience was going to give him an easy time. At home, in India, he was equally familiar with adulation and denigration. His work was always coming under attack – from apoplectic Hindus, jealous colleagues, upstart young students, all of whom fired darts that fell harmlessly from him, as if he was Bhishma, invincible warrior of the Mahabharata. It was just such a missile – an egg, splatting against Vyasa’s shoulder, leaving its bright trickle of photogenic yellow down his starched white kurta – that had first put his face on the front of every Delhi newspaper, and first linked his name with iconoclasm and controversy.

But these people – these coiffed and pressed, impeccably opinionated, yet traumatised New Yorkers – were not going to put up their hands at the end of his talk and ask complicated questions about obscure shlokas. It was unlikely that any of them would shuffle to their feet when Vyasa had finished speaking to tell a long, rambling anecdote about the god Ganesh’s popularity among the Hindus and Buddhists of Nepal. That lady at the front with the blonde curls and white linen jacket: she was not going to rant about how Professor Chaturvedi maligned the divine dictation of India’s epic. The New York Public Library was too large for such tirades, the domed glass ceiling of this room too politely soaring. Here, Vyasa had the soothing sensation of being underwater, in a cave of darting fish, cosseted deep within the library’s glinting heart, within the belly of the city. These people had come to hear him because his books sold well, because he had appeared on American TV, because they had heard his voice on the radio reasoning with all the assembled cranks and ignoramuses of India. He knew it was odd – how in India, and increasingly elsewhere, such arcane knowledge, such esoteric subject-matter, had worked in his favour; how the journalists and editors had come to rely on his opinion, of all the very many available to them; how
his
doctoral thesis was edited down into a sumptuously illustrated book (which leapt to the top of the Indian bestseller lists and stayed there from Diwali through to Holi). He smiled at himself, at his outstanding good fortune, and when he opened his mouth again, the words came out just as he intended: honeyed, practised, slow.

‘It is an honour for me to address you tonight at this time of crisis for your city,’ he said, bowing his head towards the faces turned piously in his direction, so that the room burst into spontaneous applause. He paused again – gave the clapping a moment to subside – allowed the silence to thicken, grow rich; and when at last his elegant, persuasive voice vibrated through the air, and licked its way around the hall, the audience seemed to tremble in collective anticipation.

‘Tonight I will speak on a subject very close to my heart, on the elephant-headed god Ganesh, the most endearing deity of the voluminous Hindu pantheon. Ganesh’s cheerful, rotund form is found in homes and temples the length and breadth of the subcontinent. Every endeavour – every wedding, every business, every lecture, even – must begin with an invocation to Ganesh, who removes obstacles, and imposes them, on mortals. Ganesh is renowned, too, as the scribe of India’s mammoth, all-encompassing epic, the Mahabharata. Tradition has it that he alone, of the many thousands of Hindu gods, was chosen by Brahma to write down this work of literature for Vyasa, its author.’ Vyasa looked up from his notes and glanced around the hall. ‘Yes, this same jovial-mysterious god was employed by my namesake.’ The ties between them, Vyasa thought, went deeper than history and when he spoke next, his voice was almost a whisper: ‘Yet in the current political climate, when my country is being run by right-wing Hindus, it behoves me to state clearly that, contrary to popular belief, despite the agonised utterances of certain religious factions, Ganesh was not actually the Mahabharata’s scribe. It is dangerous to invoke the wrath of any deity’s fanbase’ – he threw the room a quick, practised smile – ‘particularly those of the ever-living gods of India; but I feel sure that Ganesh himself would agree with me when I state that the elephant-headed god is an impostor.’

With that, Vyasa leant back on his heels – and the audience relaxed once more into laughter.

It was simple now; he had got them on his side. All he had to do for the rest of the hour allotted to this lecture was to stand here, square his shoulders, open his mouth, and the words he had spoken so often, in so many other, less-illustrious halls, in much further-flung corners of the world, would flow out of their own accord: as if his ancient literary forefather, Vyasa himself, was dictating the narration.

A door opened at the far end of the hall, and Vyasa registered a slim figure on the periphery of his vision, clad in an intense saffron-yellow. It wasn’t one of his Hindu nationalist detractors, however. It was an Indian woman in a sari, who moved quietly along the back row of chairs and sat down in the corner. The colour was unusual for this borough of New York. The smart Indians who inhabited Manhattan did not usually wear saris like that, especially not in late October. They dressed like everybody else, in blacks and blues and cool off-whites, in wool and plaid and leather. They did not want to be mistaken for more recent, more aromatic, arrivals, the type who ran grocery stores in Queens. And Vyasa supposed that in the past month, few people of a certain complexion would venture forth in ethnic attire.

He still didn’t turn to look at the woman in the sari – anyway, she was too far away for him to make out the details of her face, whether she was young or middle-aged, native to Manhattan or a provincial visitor – but her presence was beatific nonetheless, and as his argument grew in pace and complexity, as he dragged his audience back in time to the riverbanks and forests of ancient India, through prehistoric dictations and modern interpolations, the idea occurred to Vyasa, with a delicious shudder, that this distant blur of saffron-coloured-femininity might be the very woman for whom he had pined so long – Leela.

New York had become her home. She was one of those Indians who, having left, chose never to return. He had wondered about her so often during the intervening years, had so frequently tried to imagine her new life in America, with its inevitable parade of children and possessions, accomplishments and disappointments, that this yearning had become a part of his being. But there was no need, any more, to be haunted by phantoms of her presence because, after all this time, and despite her many efforts to the contrary, Leela and he were destined to come together. His unsuspecting son was marrying the niece of Leela’s husband – and Vyasa himself had subtly encouraged the union. Every thought he had had since arriving in New York, in her city, was freighted with the knowledge of this triumph.

‘The Brahmins usually outlawed their sacred texts from being committed to writing,’ Vyasa said now. ‘Indeed, the Mahabharata’s claim to sacred status as the fifth Veda is partially predicated on the ancient oral form of its transmission. So how, we might ask, did Ganesh come to be associated with the writing of it? I would like to suggest,’ and here Vyasa gave one of his disarming smiles, ‘that the sections of the Mahabharata that deal with Ganesh’s scripting are in fact later interpolations. Ganesh was not there in the beginning.’

And as the roomful of New Yorkers leant forward to hear his controversial argument, Vyasa, almost giddy with desire, turned his eyes at last on the woman in the corner. He was bringing Leela back into the family, and there was nothing whatsoever she could do about it.

Hari gave his wife a nudge. ‘Look, Leela. India.’ She raised her eyes from the newspaper she had been pretending to read and looked out of the aeroplane window. There was nothing much to see yet: a vast brown land mass shot through with green, waterways that looked like trickles from this distance, those paper-thin fields upon which the country depended for nourishment. ‘We’ll soon be flying over Delhi,’ Hari said, trying to contain his excitement. ‘Connaught Place, Humayun’s tomb, India Gate, the Yamuna River.’

‘Do we really fly in over the city?’ Leela asked. She doubted it. The airport was in the south-west.

But Hari wasn’t listening. ‘It’s changed completely since you were here last. Beyond the river there’s so much development now. Those jungly places in the south – where it was scrubland and dust – nothing but houses. Offices everywhere, and new roads, and cars of all types, from all over.’

Leela nodded. She had heard this wonderful story many times before – the tamarisk and mango groves magically transformed into high-rise blocks; the housing colonies and markets that had sprung up along the river; and, above all, the arrival of the flashing, beeping icons of modernity: cellphones, cappuccino, chainstores. ‘You’ll see,’ Hari said. ‘It’s not the city you left behind.’