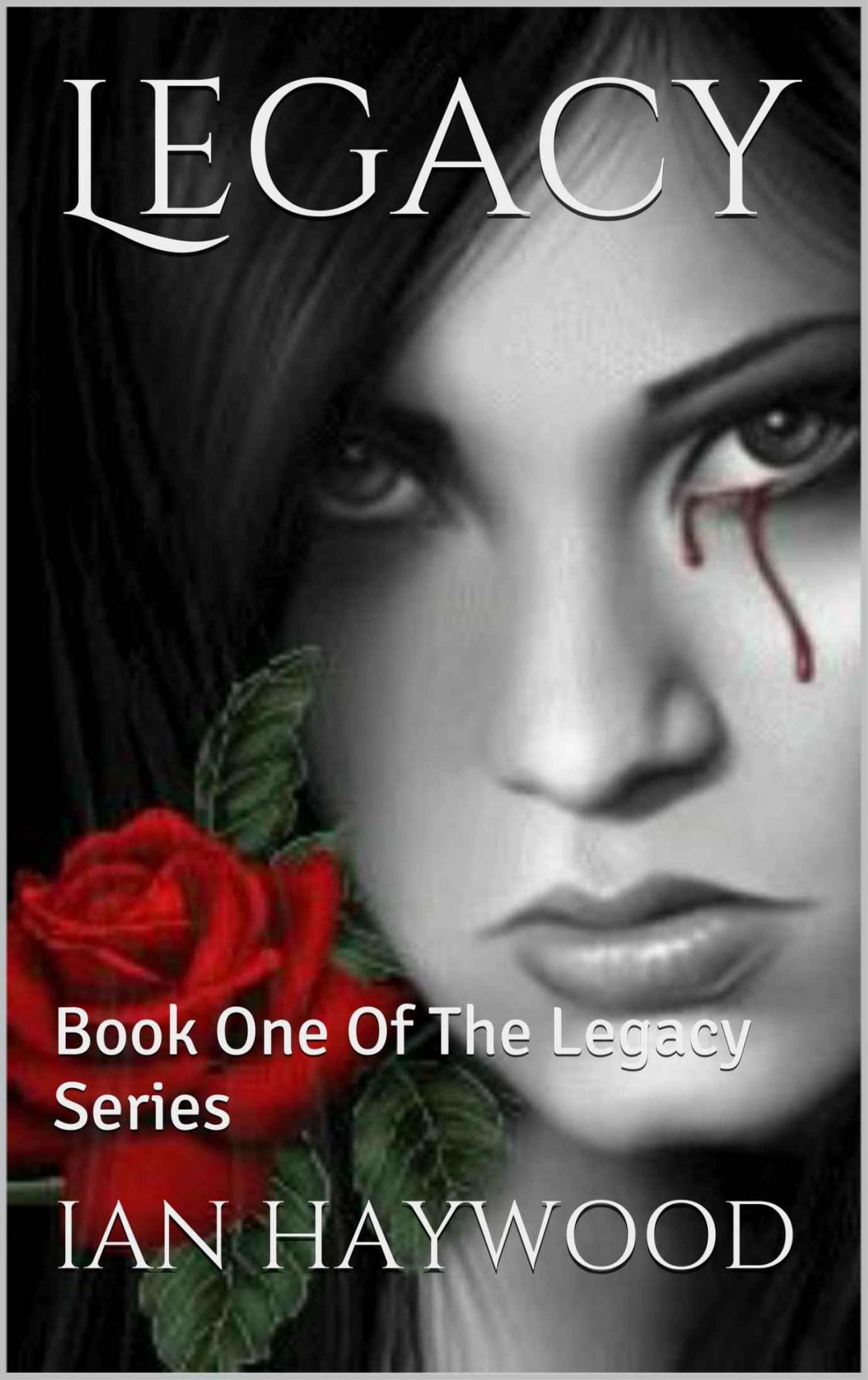 Book One Of The Legacy Series

Throughout my life, I have had the privilege to have shared it with some amazing people – my family has always been the most important factor in my life and I was blessed with a good one from birth.

And then you meet the person you want to spend the rest of your life with and you start your own little family.

These are the people who mean the most to me – so my dedication goes out to my fiancée Tammy and my four children Cleo, Paige, Jasmin and Riley.

To Mum, who has always been there for me throughout my life and my Dad, who was sadly taken away from us – I miss you every day x

To the rest of my family Liz, Frank, Martin, Michelle, Richard and Sam.

Also to the memory of my Gran, Grandad, Uncle Jim and Uncle John.

Parts of this story are told from the main character Naomi’s point of view and to make this more obvious to the reader, these parts are shown in italics.

Anyone could be forgiven for mistaking the Sumarian Valley for Hell itself as it is completely engulfed with no end of demonic creatures, each just as bloodthirsty and scheming as the other, each willing to kill anyone or anything without a second’s hesitation – be it for a valid reason or not.

So with having such a reputation, when night time fell upon it, the Sumarian Valley became undoubtedly the most eerie place within the Immortal Realms – add to that an incredibly dense fog which would make anyone who was brave enough to move around it completely undetected.

One such person had decided to take advantage of these conditions to complete their journey unnoticed and with the whispers spreading through the lands of a possible war breaking out at any moment, it would be a very wise move not to be too far away from somewhere safe for too long.

But this lone figure feared nothing.

In fact, if anyone dared to even stand in this person’s way, then the final outcome would certainly not be what any attacker would have first envisaged, but luckily this wouldn’t need to be proved as there was no sign of life for miles.

Whereas others found sanctuary within the many villages which surrounded the valley, this person found safety ingeniously hidden away from prying eyes within one of the numerous cliff faces – a home that only a small selected number of people knew even existed.

Its grand heavy oak door entrance was expertly concealed by a number of large rocks which when opened unveiled what seemed like an endless labyrinth of narrow stone passages - some of which were dead ends that contained the most deadliest of traps meant to cause an extremely painful and gruesome death to whoever took a wrong turn.

That is if that person had managed to make their way through a number of well trained, heavily armed ruthless guards who would not hesitate for a second in killing any trespassers who tried to enter uninvited.

And right now two of those very guards were walking through the stone passages in response to the echoing thuds that were coming from the heavy oak door.

Even though they were eagerly awaiting this person’s return, they still opened the majestic door with extreme caution to be greeted by the lone figure whose identity had been cleverly obscured by a large black hooded cloak.

The guards swiftly closed the door as their leader walked straight past them at a determined pace without any sign of acknowledgement that they even existed – but the guards expected no less and keeping your head down and always showing respect to those above you was the most sensible thing you could do if you wanted to continue serving in this army or even more importantly, remaining alive.

The endless stone passages normally lay quiet, but right now they were filled with the sounds made from the hooded figure’s boots as they splashed through the little pools of water that had settled on the ground filling the already stale air with a pungent smell of damp earth.

And that noise continued until the figure suddenly arrived at a breathtaking stone archway which instantly turned the surroundings from a damp underground tunnel to some kind of ancient Roman palace.

Through the archway was a massive well-lit and ornately decorated stone hall and sat around a massive wooden table inside were the elite and highest ranked of the army who were all talking loudly amongst themselves, but they instantly ceased their conversations and quickly got to their feet as the hooded figure came into view.

The figure paused for a moment and nodded to them before directing them to return to their seats which they all immediately did, in anticipation of what was about to happen next.

They all watched intensely as the figure menacingly circled the massive table, each of the men growing more and more nervous, but before one word was uttered, the figure’s hood was lowered to reveal a young beautiful woman with long black hair.

“Gentlemen, as you are all aware, we have been operating under a massive cloak of secrecy in order to infiltrate the Great Council from within and I am more than pleased with our progress so far. Gereziac will be nothing short of humiliated when our spies rise up and eradicate his beloved Great Council, leaving the surviving Elders powerless and unable to decide the fates of their people. With everything in disarray, that would give us the greatest opportunity to release our troops and claim these lands for ourselves!”

One of the men around the table spoke up.

“Our men are ready to attack at a moment’s notice! That was what we were discussing just before you arrived, Alana. But -”

“Be patient – your men will receive their orders soon, General Azaac. I know that our men are growing impatient, but soon they will be released upon Gereziac and his army and then everyone will know what we are capable of. There will be much blood spilt amongst these lands the likes of which have never been seen before and anyone foolish enough to stand in our way will pay the ultimate price – kill or be killed, gentlemen! Show no mercy whatsoever, be it man, woman or even child! Remember, our troops are bred from the most demonic stock that has ever roamed the Immortal Lands and even Mortus himself, the leader of the Black Demons has given me his assurance that he will not interfere with our intentions when I give out the order to attack.”

“How do we know for sure that we truly do have Mortus’s word that he will not stand in our way? He is an absolute maniacal beast who will stop at nothing to get what he wants!” Another voice rose from the table.

Alana stopped and walked towards the man who had spoken up and slowly leant over his left shoulder before whispering into his ear.

“Because I can be incredibly persuasive when it comes to men and even someone with a reputation as despicable as Mortus still has certain needs which does help towards negotiations of course!”

The man gave a wry smile as Alana continued her speech.

“As you know, our mission is to destroy everything around Gereziac until he stands defenceless and make him our prisoner to do as I see fit – well, I have assured Mortus that I will deliver Gereziac to him so that he can have the pleasure of killing him personally.”

“I knew there was a catch! Why let Mortus have the pleasure in killing Gereziac when it is our army who would have brought Gereziac to his knees? If justice is to be rightly served, he should die by your sword, Alana!” General Azaac said defiantly.

“Your passion on the matter is admirable Azaac! But do I have to remind you that you are a General in my army and therefore I expect you to behave as such? I have built this army from nothing and you have been rewarded well for your service and loyalty towards me, but you are more than aware of what can happen to anyone who becomes my enemy! I have never been wrong in the past and I can assure you that I know what I am doing. Like it or not, Mortus and I want the same thing – Gereziac dead. I don’t care how he dies – just as long as he suffers immensely when he does.”

“We speak so strongly of making a successful attack upon the Great Council,” General Azaac added, “but as we are all aware in this room, they still possess a weapon even we can’t infiltrate – every attack has been thwarted for centuries because of it! Surely everyone around this table remembers what happened to the last person who stole it!”

All the men around the table nodded their heads in agreement and watched on intensively as Alana took her seat at the head of the table.

“Ah, the infamous Great Book! Or what some of the Elders call the Writings of Fate?” she asked, to which General Azaac nodded. “What if this book was to, let’s say, disappear from under the Great Council’s noses, what sort of situation would they be in then?”

“In complete and utter disarray frantically trying to find it! Without it, they would be completely blind to any attack! But only a privileged few have ever seen the Great Book, never mind touch it! Everyone here is well aware that it is kept safely hidden within the Great Chambers!” answered General Azaac.

And with that, Alana opened her cloak and from a hidden compartment within it, pulled out an incredibly large and also very old book which she promptly dropped onto the wooden table with an echoing thud.

One Foot in Eden by Ron Rash
Hesitant Heart by Morticia Knight
A Brush With Death by Joan Smith
Cover Me (Rock Gods #3) by Joanna Blake
Friends Like Us by Lauren Fox
The Land of Rabbits (Long Shot Love Duet #1) by Aven Jayce
A Chance for Charity (The Immortal Ones) by S.L. Baum
Still Waters by John Harvey
Mrs. Jeffries Pinches the Post by Emily Brightwell
Branded for Murder by Dick C. Waters
Our partner