Read Legend of the Ravenstone Online 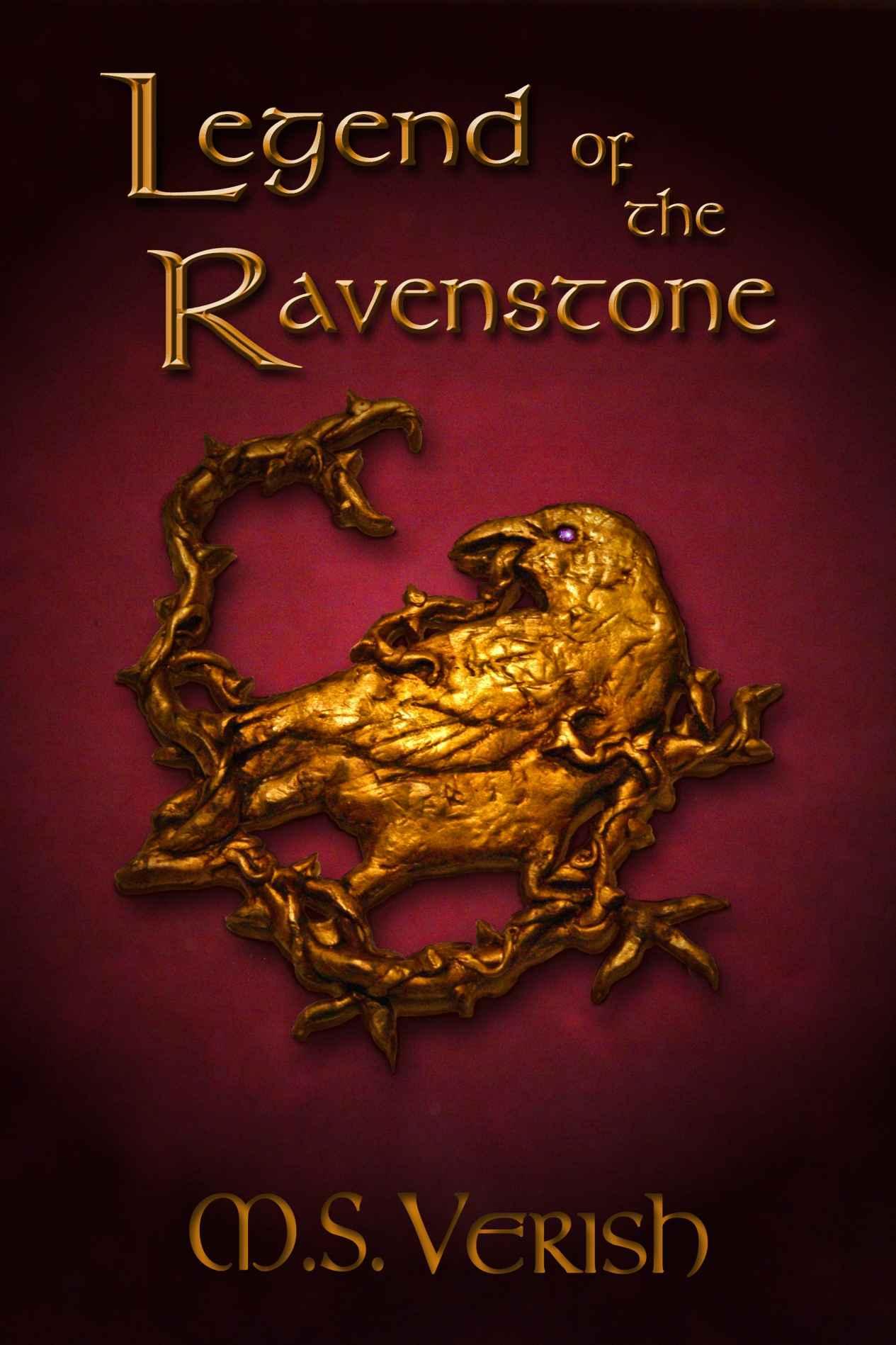 No part of this work may be reproduced, stored in a retrieval system, or transmitted by any means without the written permission of the authors.

LEGEND | of the | RAVENSTONE

Prologue | In the Dark

To Be Concluded In...

*(Curse of the Ravenstone)*

T
his book would not have come to fruition without the support and time given by friends who believe in our world of fantasy.
Richard
,
Cari
,
Archer
,
Ray
, and
Brian
. We cannot thank you enough for your advice, fierce honesty, expertise, and unwavering friendship.

LEGEND
of the
RAVENSTONE
Prologue
In the Dark

T
here was a hole in the floor: a gaping patch of darkness large enough for a man to fit into and descend. The Priagent of Lornabaez was not an average person. He was a short, wiry man, and before Tyrianne could protest a tenth time, he was being swallowed into obscurity.

She glared at the hulking giant across from her. “I can’t tell you how many ways this is going to be a mistake,” she grumbled.

Nesif said nothing, his dark eyes meeting hers for but a moment before he looked away. This aggravated her even more. “I don’t like this. Not at all.” She stepped down into the hole, barely able to see her footing.

The Priagent’s voice found her. “You do not have to like it, Miss Xiuss. You need only do your job.”

Difficult since you went ahead of me,
she thought. As she descended the narrow steps, a soft, amber light—too constant to be a flame—broke the darkness. At the bottom of the stairs, her liege waited beside an illuminated rune in the wall.
Jornoan magic. In a secret passage. No good can come of this. He is up to something. Something big.
The Priagent’s face, however, betrayed nothing. She joined him just as Nesif finished the stairs. She had scarcely heard him descend; the passage, like the darkness, devoured nearly all sound.

Tyrianne had been in many unpleasant places: alleys, dungeons, tombs... It was to be expected in her line of work, and she had come to expect a certain feel to these locations. Darkness, dingy, slimy stone, dank, oppressive air weighted with the smell of decay—none of this was new to her. This passage, however, was different in that it lacked any sensory familiarity. There was no odor, no sense of moisture, coldness, or warmth. There was darkness, but it was unnatural darkness, as though someone was purposely shielding their eyes from what lay beyond. She suppressed a shiver and noticed the Priagent’s black eyes were upon her. Immediately she straightened her shoulders and faced the passage ahead of them, but her fingers subconsciously wrapped around the hilt of her sword.

The Priagent moved forward, his hand grazing against the wall so that more hidden runes began to glow. For each new illumination, the one behind it faded into blackness. There were no rats, no beetles or roaches, no spider webs or stringy roots. They were surrounded by stone, shadow, and silence, moving forward in a dim oasis of light.
Trapped
, Tyrianne thought. She half expected Nesif’s hand to fall upon her shoulder—to assure her as he usually did when his people’s magic was involved. For the years of service she had given to the Jornoan ruler, she was still a foreigner in an ancient land built upon customs and powers she did not—or would ever—understand.

When her shoulder remained untouched, she glanced to see if Nesif was attentive to her at all. His eyes were locked on his brother, but she knew better.
You are a terrible liar—with or without words. And you know what this is about, don’t you?

“Miss Xiuss, you are treading upon stone that has not been touched since the days of the Cataclysm,” the Priagent said, his voice nearly too soft to be heard.

“How did you learn of this, my lord?” she asked. “What is it that brings us here?”

“Did you know,” he began, “that there is a tower in this palace that contains an old archive?”

She frowned.
He is mocking me.
“Of course, my lord.”

“Knowledge is mightier than any blade forged by man,” he said.

And now he is being cryptic. He should know Jentica was forged by a woman.
She sighed and tried again. “What does this passage lead—”

“We have arrived,” the Priagent interrupted. A low arch stretched above them, slowly brightening with amber inscriptions. Beyond the arch was a small chamber that contained a stone altar at its center. The Priagent strode forward and set his hands upon its surface. “As shameful as it is that my people’s legacy has been forgotten, I will be the one to reclaim the future,” he murmured.

Tyrianne looked to Nesif for enlightenment, but it was a wasted gesture. Much like the altar, he stood motionless, his face blank. She turned back toward the Priagent, but she was reluctant to pass beyond the archway. Her grip on her sword tightened when she saw his hands pass through the stone and into the altar.

Whether it was a look of triumph or a look of madness, she could not say, but never had she seen such an expression upon the ruler’s face. Eyes wide, lips parted, his hands emerged from the altar laden with an object the size of a Human skull. It was black, lustreless, and shaped like the withered corpse of a...bird?
A dead crow,
Tyrianne thought, disgusted.

As the Priagent raised it higher for them to see, she realized that it flickered dimly from within—a glimmer of silver light to indicate some magical vitality. At any moment she expected an explosion of lightning, a thickening cloud of deadly mist, or a malevolent demon to emerge and destroy them all. Her knuckles were white on Jentica’s pommel, though she knew there was no way she could battle such a force. Magic was evil; magic trumped all.

“You can relax, Miss Xiuss,” the Priagent said. “You need not fear the Ravenstone, as you are not a being of magic.”

“What is that thing?” she demanded, dispensing with formality.

The Priagent smiled, and ice could have formed around his lips and beard. “It is a gift from beyond this world. It is a beginning and an ending. It is the future that I wield.”

Bones and Bagger (Waldlust Series Book 1) by Ted Minkinow
Taming the Playboy by M. J. Carnal
How to Be Lost by Amanda Eyre Ward
The Goddess Abides: A Novel by Pearl S. Buck
Bed & Breakfast Bedlam (A Logan Dickerson Cozy Mystery Book 1) by Abby L Vandiver
Spirits of Ash and Foam by Greg Weisman
Locked In (Locked in Love) (Volume One): An Alpha Billionaire Romance by Song, Myra
Wolf Creek by Ford Fargo
Supernatural Transformation: Change Your Heart Into God’s Heart by Guillermo Maldonado
Daughters by Osmund, Florence
Our partner