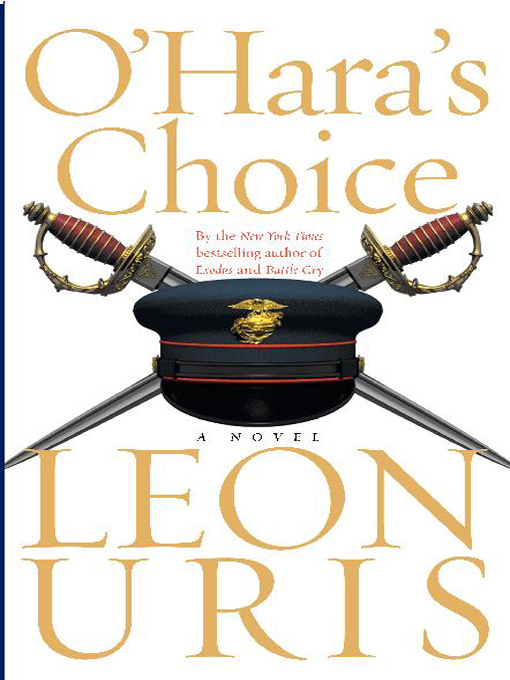 3   The Return to Fort Sumter

14   The Halls of Inverness

23   The Battle of Marathon

Dedicated to
my cousin
HERSCHEL BLUMBERG
“the finest ever seen”

The Royal Society of Paddy O’Hara’s Wart-Hogs were the ugliest and most vile men to ever wear the uniform of United States Marines. They were molded out of old, stiff, cracked leather.

The Wart-Hogs were an exclusive brotherhood with no pro-vision at inception for perpetuation. There were about eighteen charter members, no one knew the exact number, all men whose lives had been saved in battle through the gallantry of Paddy O’Hara in three, maybe four, separate Civil War actions.

For many years after the War, all who could gathered for an annual donnybrook. As time moved on, many of the reunions took place at graveside and the society grew more exclusive. But no Wart-Hog ever died in the poorhouse. They were bound by the most powerful of all ties, that of men and their comrades in a war.

The Wart-Hog doors were always open to other Wart-Hogs, but they were scattered and burdened with family life and other
traumas, so that meetings became occasional and by chance. Only three remained in the Corps. However, it appeared that the rendezvous at Prichard’s was by design.

Prichard’s Inn & Tavern stood on the Post Road in Virginia, across the Potomac from Washington, a most convenient watering hole.

Master Gunnery Sergeant Wally Kunkle was first to arrive by horseback from Quantico down the pike. The Corps had a piece of land there and had established a small, convenient station near the Capitol, where they formed up new units, or housed an overflow from Washington. Quantico had become a nice rest spot and transit center.

Master Gunnery Sergeant Kunkle had been on sea duty and a member of the contingent that ran the Germans out of Samoa. Kunkle had not been home in three years. Well, he actually didn’t have a home.

The Gunny wore his forty-odd years well and he cut quite the figure as he rode up to the inn at Prichard’s. When the stable boy had seen to the horse’s comfort, he came to the Gunny’s room and poured buckets of hot water over him in a big galvanized tub to wash away the road dust. Kunkle then repaired to the common room with the large fireplace in the pub and allowed himself to be overtaken by nostalgia.

Wally was the middle child of nine kids, son of a German immigrant who worked as a blacksmith in the Philadelphia police stable. The family lived on a cobblestone alley in a squeezed row cottage in South Philly. During one particularly dirty winter, Wally’s mother and an infant sister died of the throat disease.

The children, save Wally, were scattered to relatives, mostly on farms in western Pennsylvania. Wally was a quiet, ornery, angry,
fierce kid, and when the authorities came for him, he hid. He was finally taken to a humorless Lutheran orphanage, where his failure to bend to discipline led to corporal punishment.

Wally had a fight a day, sometimes more. After a year of it, he ran away from the orphanage and begged his father to let him remain hidden in the cottage to which he had returned.

The tiny house no longer had the siren lure of baking bread, as it did when Ma was alive, but had deteriorated into a home for rats drawn by the smell and taste of beer.

Wally spent his time near the navy yard on the Delaware River, where street urchins hung out, and picked up penny work doing laundry and running errands for the sailors. It was a highly territorial environment, where one used his fists to stake a claim to work a particular barracks. Wally fought his way to the barrack housing a Marine platoon.

Some of the Marines had been heroes in the wars against Mexico and the Seminole Indians. There were shoes and brass buttons and buckles to be shined and fresh hay to be changed in the bedding and a potbellied stove to be fed and cleaned. And clean he did. The Marines had far fewer bedbugs than the sailors.

Corporal Paddy O’Hara, an Irish immigrant who had survived the terrible potato famine, became Wally’s big brother and protector. Wally made it the best job in the navy yard. The Marines were generous with smokes, the currency of the day.

On payday, illegal boxing matches were held beyond the main gates. Marines, sailors, shipyard workers, and visiting crews all had their champions in bare-knuckle pugilism. Before the men went to the pit, kids held preliminary fights for pennies tossed into the ring, and an occasional nickel. For Wally Kunkle at thirteen, this was a bonanza. After a particularly bloody match, there was sometimes as much as a dollar to be divided, seventy–thirty.

As a fighter, Wally Kunkle was cursed with a special gift. He could absorb punches and never go down. His talent, born in the alleys of South Philly and honed at the orphanage, won a lot of beer money for the Marines who bet on him. Wally ran out of
competition his own age and size and had to take on bigger kids. “Young Ironsides,” the Marines called him, and “Boilerplate” and “Kid Granite Jaw.” Even Paddy O’Hara was unable to get Wally to stop fighting heavier and heavier opponents.

Then the inevitable happened. Wally took on an opponent thirty pounds heavier than himself. He showed the courage of a little bull, but absorbed a fearsome beating.

Corporal O’Hara pleaded, in vain, for him to throw in the towel when a sudden change of fortune occurred. Wally’s opponent became so exhausted throwing punches that he could no longer lift his arms or catch his breath. And that was that. After laying out the bullyboy, Wally collapsed.

Corporal O’Hara lifted Wally in his arms and carried him back to the barrack and declared his boxing career over. The Marines patched him up and carved out a bed space for him on the floor near the stove, where they laid a sack stuffed with hay for Wally’s comfort.

When the juvenile constable came looking, Wally was kept hidden and the Marines advised the constable not to come looking again.

Well, they had pet dogs and such, but Wally presented a different problem. The platoon commander, Lieutenant Merriman, was a right fair guy and, noting the men’s affection for Wally, had some documents fixed up to state that Wally Kunkle was actually sixteen years of age, and he was sworn in as a Marine. At thirteen, he became a Marine drummer boy.

Paddy O’Hara had lost his family—four brothers and two sisters—in the Irish potato famine ten years earlier. The sole family survivor other than himself was his sister Brigid, who became a housemaid in New York. When Paddy was sixteen, he joined the Marines.

Against all odds, Paddy had been a prolific reader as a child, and under his brotherly watch, Wally entered the world of reading and writing. There were always books and magazines circulating in the barrack, mostly about girls and sexual situations. There were
also barrack readings of poems by Paddy O’Hara, which gained an unusual popularity among his fellow Marines.

By the year of 1860 . . . eleven Southern States had formed a coalition to preserve the institution of slavery and threatened to secede from the United States if Mr. Lincoln was elected president.

In November, Abraham Lincoln won . . .and as his inauguration grew close an ominous cloud was descending upon the land.

Southern States called up their militias. Southern-born officers resigned from the army and headed home to organize the Rebels’ army.