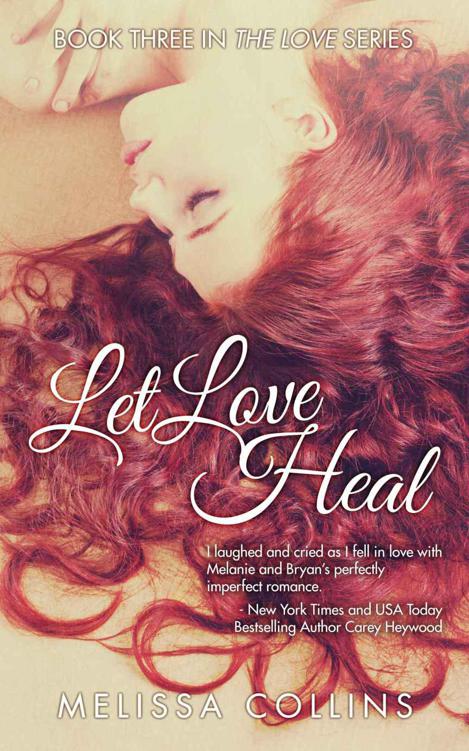 This book or any portion thereof may not be reproduced or used in any manner whatsoever without the express written permission of Melissa Collins, except for the use of brief quotations embodied in critical articles and reviews.

For those who need a reminder, every now and then, that beautiful does not mean perfect.

The I-beam swings haphazardly in the clouds. Teetering and tottering in the crystal-blue sky, it’s the perfect juxtaposition of artificial and natural – steel illuminated by the sun. Over a ton of metal effortlessly cascades through the air on the whim of a crane. It almost looks like a graceful ballet dancer as it swirls and twists, dips and dives. It’s mesmerizing, actually.

And then disaster strikes.

A deafening crack of a snapped chain sounds through the once peaceful air. The lively chatter of construction workers and architects instantly morphs into chaotic screams. Everyone runs, seeking cover from the impending doom.

As the massive beam plummets to the ground, people scramble, frantically grabbing others along the way to pull them to safety. It all happens so quickly. In the blink of an eye, it seems as if everyone will escape unscathed.

The beam changes direction, up-ending itself. Head architect, James Crane, exits the shell of the building. Hardhat on and earplugs in, he’s always one to follow procedure to make sure that his work site is safe. His eyes are pulled away from the clipboard of today’s itinerary as the shadow of a passing figure flashes before him.

His eyes are drawn skyward. The sun blinds him; his sunglasses are tucked into his front pocket rather than perched across his nose. He doesn’t have a second to process anything.

Crushed beneath the massive weight of the steel beam, the last thought that passes through the mind of Jimmy Crane, is of his wife, Lucy and his unborn daughter.

Lucy Crane is consumed with decorating the freshly painted nursery. If ever there was a woman more excited to meet her first child, well, Lucy’s jubilance would put her to shame. Purple frills and pink lace don every surface of the room. It’s a princess’ heaven and a mom-to-be’s dream come true.

Lucy sits on the floor, sorting through baby gifts from her shower last weekend. Holding a glittery onesie with an attached pink tutu up against her eight-and-a-half-month pregnant belly, she whispers quietly to her unborn daughter, “Maybe one day you’ll be a ballerina … Melody.” She tucks a piece of hair behind her ear and taps a finger against her lip as she contemplates one of her husband’s, James’ top name choices. “Hmm, no that just doesn’t sound right.” Still going through baby names, Lucy and Jimmy haven’t been able to find one upon which they both agree.

Last night, as they laid in bed, they settled on a short list of names that they each liked. Lucy was leaning toward more trendy names – Jessica, Ashley or Emily. James, on the other hand, wanted his daughter to have a less popular name; she was one of a kind, after all. Well, how could Lucy argue with that? From the moment she’d told her husband of less than a year that she was pregnant, he had absolutely radiated with love and joy. Conceding on his name preference was a small way that she could repay him for how he’s taken care of her through the entire pregnancy.

They’d been high school sweethearts and in the seven years that they’d been together, they’d shared a lifetime’s worth of love. When James would place his lips up against Lucy’s swollen belly, and talk to their child, she could swear that her heart would burst at the overly full feeling of love.

On a mission to finish her sorting all of the baby clothes, Lucy snaps out of her happy musings of her husband and their baby. But when she comes across a purple sequined outfit, she can’t help put place it across her belly and talk to her daughter once more. “This is going to look absolutely perfect on you … Melanie.”

The name rolls off her tongue and sings to her heart. It was one of Jimmy’s first suggestions, liking “M” names more than any other. Lucy had originally dismissed it, but now, sitting quietly in her soon-to-be-born daughter’s room, the name seems to fit perfectly. Smiling broadly, she says the name once more, “Melanie.” Rubbing her belly, Lucy talks to the kicking baby who is rolling around inside of her. “Do you like that name, little Miss Melanie.” Another kick and roll. “Well then, we’ll just have to ask Daddy what he thinks when he gets home.” Another kick widens Lucy’s bright smile. “Okay now, Melly Belly.” Lucy chuckles softly at the ridiculous nickname she’s just given her daughter. A smile spreads across her face because she knows that James will be pleased with her sudden turn around on his top name choice.

With numb and wobbly legs, Lucy stands to put the piles of clothes away when she hears a knock at the door. Checking her watch, she realizes that it’s past four in the afternoon. She’s been so lost in her baby daydreams that she didn’t realize that she hadn’t heard from James all day. Knowing that he is extremely busy trying to manage this massive project, she immediately dismisses her concerns. No phone calls during the day means that he is guaranteed to chew her ear off at dinner. The man loves his building, that’s for sure.

Brushing her hands over her trendy and modern dark-blue maternity shirt, Lucy flattens out the wrinkles that set in as she was draping onesie after onesie across her belly.

As she peeks through the curtain that hangs across the top window of the door, she smiles cheerfully at her husband’s best friend and co-owner of Crane Building Associates, Ray Richards.

“Hey, Ray. What’s going on?” Lucy steps to the side allowing Ray to enter into the small foyer. Closing the door behind him, she continues talking. “Jimmy isn’t home from work yet, but come on in. Can I get you a beer?” Lucy’s bright voice does nothing to lighten the darkness that is cast over Ray’s face.

Ray shakes his head, declining the beer. He looks into Lucy’s bright blue eyes, and says, “We need to talk, Lucy.” His voice is even and curt. Ignoring her stunned reaction to his cold demeanor, Ray walks past Lucy into the sunken den of his best friend’s new home - a home to which he’ll never return.

Ray sinks into the old, beat-up couch and memories flood his head and heart. This is the couch that they had in their first apartment. It was a rat-hole of a place, but somehow Ray and Jimmy managed to make it work. The couch is a hand-me-down from Jimmy’s parents and has survived remarkably well through their college years.

Burying his head into his hands, Ray can no longer contain the sobs that have been threatening to swallow him whole since he pulled in the freshly-paved driveway.

Lucy waddles over to the couch and, not-so-gracefully, lowers herself onto the cushions. Tenderly wrapping her arm around his broad shoulders, she says, “What’s wrong, Ray? I’m getting a little worried here.”