Read Let Me Love You Online

Let Me Love You 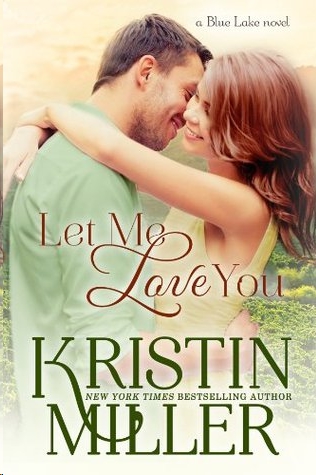 Other Titles by Kristin Miller

LET ME LOVE YOU

Other Titles by Kristin Miller

When I Fall in Love

Gone with the Wolf

Four Weddings and a Werewolf

So I Married a Werewolf

The Vampires of Crimson Bay Trilogy

Demand of the Dragon

One Night to Remember

This book is a work of fiction. Names, characters, places, and incidents are the product of the author’s imagination or are used factiously. Any resemblance to actual events, locales, or persons, living or dead, is coincidental.

Copyright
©
2014 by Kristin Miller. All rights reserved, including the right to reproduce, distribute, or transmit in any form or by any means.

For letting me love you.

We’re “sympatico”, baby! (My fingers are forever crossing for you!)

Joey Brackett had always claimed he excelled at two things—flying was the other one. But as he finished the safety check on his Cessna 182 Skylane and cranked hard on the prop to remove any standing oil, flying was at the forefront of his mind.

“Let’s get this beast in the air,” Walker said, swinging into the small fixed-wing plane. His college friend stowed his duffel bag behind the seat and strapped in. “I want to find my jump point before dark.”

Joey scanned the sky. The sun threatened to set, casting a hard red glow over the Sierra Nevada. The air was crisp and cold, biting at his hands as he made his way around the plane, tugging and jerking on the flaps and tail wing to make sure everything was the way it should’ve been.

“Won’t take long to get to Birch,” Joey said. “Thirty minutes in these winds.” They had the weather on their side. A storm was picking up, gusting winds over the mountains and down into the tiny valley housing Blue Lake airport. “You ready?”

Swinging inside, Joey strapped in and pulled on his headset. Fishing his cell out of his breast pocket, he set it between the bucket seats on top of the emergency gear he stored there. He turned the key in the dash and jump-started the engine. He would’ve radioed for takeoff, or relayed his flight plan, but Blue Lake airport didn’t have a tower. He liked it that way. No formal plans. Get up and go.

He had a solid idea in mind for this trip: a quick jaunt through the mountain passes, over the long-abandoned gold-mining town of Birch, and up Northlands Point to where Walker wanted to scout a place to BASE jump. Walker had been an adventurer at heart for as long as Joey had known him—it’s what had drawn Joey to him in the first place. Where Joey took to the skies by plane and relished twisting and turning his machine through the clouds, Walker had the yearning to climb to the highest point in the Sierras and jump.

As the prop turned lazily before booming to full speed, Joey’s cell buzzed to life. He and Walker glanced down in unison.

“Grab it,” Joey ordered, checking the gauges as the engine warmed.

“What the hell does he want?” Joey said, more to himself than to his chuckling passenger.

Today was the first day Joey had had off in the last fourteen, and he’d been aching to ride the skies. During the summer months, when the unyielding sun turned the green mountain grass the color of dried russet, Joey would’ve switched off the engine, stowed his plane in the hangar, and run back to the fire station. But in winter, when the grass was wet and the fire threat was low, Bud went stir-crazy, finding anything to complain about. Surely there was someone else at the fire station who could handle Bud while Joey went out for a thrill ride.

Walker flicked his thick fingers over the phone’s screen. “Bud says the station is short-staffed. Rob and Mike are out sick. He wants you to come back in for another twelve-hour.”

Shaking his head, Joey set the flaps and trim tab for take off.

“Want me to answer back?”

Itching to lift off and float on the evening breeze, Joey shook his head and readied for takeoff. He gazed out over the wings of the plane, and twisted the yoke back and forth to test his ailerons. He revved the motor and turned the key to accessory, watched the RPMs, then clicked it over again. Everything was in working order. The runway stretched out before the plane, calling him closer.

They were so close.

“You sure, man?” Walker hollered over the roaring engine. “We can decide on a jump point tomorrow if you need to head back.”

“Bud doesn’t need me there. The last time he texted saying he was short-staffed, I hauled ass to the station just to have him check out to go on a date with his wife. He probably wants to go out again and needs someone to cover for him.” Joey fist-bumped the roof of the plane for luck and pressed the throttle forward. “I’m not covering his ass tonight. We’re heading up.”

“Hell yeah we are!” Walker jumped up and down in his seat and rained his fists over the roof as they turned onto the runway and readied for takeoff.

This was the moment Joey thought about every night before he drifted asleep and the first thing he thought about each morning. The idea of being free, of easing back on the yoke and lifting off the ground. Weightless. Completely at peace.

They shot like a bullet across the runway to the sounds of Walker whooping like a banshee as he drummed his fists against the side door. Joey grinned as he jammed the throttle forward and the landing gear lifted off the tarmac. With towering mountains on either side of the runway, Joey waited until they were a safe distance off the ground before banking right and soaring over the nearest ridge.

Every monotonous aspect of Joey’s life disappeared with the earth below. The stress of the workday at the station. The voice mails from debt collectors on his cell. The harping voice of his older brother, Alec, when he tried to set Joey up on dates. Alec had married his high school sweetheart right after graduation. At eighteen, he’d extended his family with an adorable baby girl, Janice. For the last ten years, Alec had made it his life’s mission to find Joey a “good woman” so he could have a “good life”. Although Alec was only two years older than Joey, he acted as if he had all the answers. Alec had started a family the way their parents had—which added to his argument that happiness came from marriage and family—and would probably be married over fifty years the way they had, too.

That kind of life wasn’t in the cards for someone who worked long hours fighting fires and took to the skies the first chance given him.

Up here,
Joey thought, diving left around a lightning-burned pine,
I’d be happy spearing through the clouds, every day, just like this.

Leaving the stress of the world on the ground beneath him, Joey soared long and free, and then plunged into a gap between two mountain passes, buzzing the highway leading from Blue Lake to Birch. Walker leaned over, smashing his forehead against the window.

“Any closer and I’m going to be able to kiss that truck driver!” Walker laughed, his voice booming through the cockpit. “You’re crazy, Brackett! You know that?”

“Sure do!” Smirking, Joey dipped the plane’s wings so that the highway disappeared beneath them. Time flew up here, in the blue space between heaven and earth. The old ghost town of Birch appeared in a valley beneath them before Joey realized they’d settled into their flight path.

Walker pointed to the worn clock tower in the center of the dusty, abandoned town.

“Remember when we had that crazy party after the annual grape stomp?” Walker shot Joey a knowing glance. “We nearly brought the place down. Bonfires, music…
Lucy Stone
.”

She might’ve been the beautiful woman in Blue Lake. Flaming red hair. Sweet lips. Dainty little figure. Most of the guys Joey knew had asked Lucy out at one point or another. She’d turned a majority of them down, Walker included.

“Yeah, I remember.” Joey circled the tower sharply, and then banked high and right toward Northlands Point. “High school kids still come out here every year. If I’m flying, the smoke from their bonfires chokes the sky.”

“Some rituals never die.” Walker peered out the window, nose pressed to glass, as the forest zoomed beneath them, darkened by the shadow of the monstrous peaks. “That’s it, yeah?”

He pointed toward Northlands Point, the jagged-faced mountain in the Sierra Nevada, distorted by wind, weather, and gold-mining experiments performed a hundred years before.

“Not really.” Walker unstrapped his belt and scooted to the edge of his seat to glance over the nose of the plane. “It’s getting dark too fast.”

Instead of checking the time on his phone, Joey noted the changing hues of the sky from smudging red to depressing blue. “We’ve got about fifteen minutes left. Want me to head down the backside? See if there’s a spot from another angle?”

“If you didn’t work all the damn time, we might’ve been able to get out here earlier.” Walker punched Joey in the shoulder. “How am I supposed to pick a spot under all this pressure?”

“If Chief Hammock had his way, I wouldn’t even be up here tonight.”

“Wait!” Walker slammed his fist against the frame, rocking the plane. ‘There! See it? That clearing there, right below the summit? Is there a place to land on that side of the peak? Circle round!”

Joey dipped his right wing and led them around the side of the mountain. “How would you get down there? Even if I landed on that stretch between the trees, you’d have to scale down the rock face to get to the ledge. It’s too dangerous to jump from the summit…”

“If you can land this plane in that gulley,” Walker said, his tone challenging, “I can climb to my jump point.”