Read Letters From My Windmill Online

Letters From My Windmill 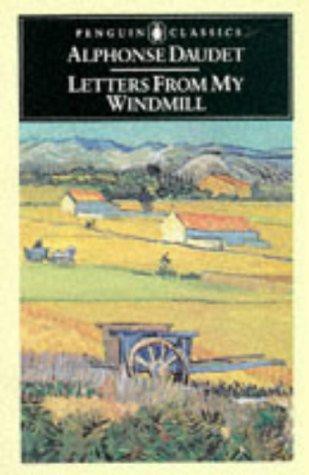 The Project Gutenberg EBook of Letters from my Windmill, by Alphonse Daudet

This eBook is for the use of anyone anywhere at no cost and with
almost no restrictions whatsoever. You may copy it, give it away or
re-use it under the terms of the Project Gutenberg License included
with this eBook or online at www.gutenberg.org

** This is a COPYRIGHTED Project Gutenberg eBook, Details Below **
** Please follow the copyright guidelines in this file. **

Title: Letters from my Windmill

*** START OF THIS PROJECT GUTENBERG EBOOK LETTERS FROM MY WINDMILL ***

LETTERS FROM MY WINDMILL
BY
ALPHONSE DAUDET

3. The Coach from Beaucaire.

9. The Lighthouse on the
Sanguinaires
.

10. The Wreck of the
Sémillante

14. Prose Ballads
I—Death of the Dauphin.
II—The Sub-Prefect Takes A Day Off.

16. The Man with the Golden Brain.

25. Nostalgia for the Barracks and Paris.

As witnessed by Master Honorat Grapazi, lawyer at the residence of
Pampérigouste.

"Who herewith has sold and transferred under guarantee by law and deed
and free of all debts, privileges and mortgages,

"To Mr Alphonse Daudet, poet, living in Paris, here present and
accepting it.

"A windmill and flourmill, located in the Rhône valley, in the heart of
Provence, on a wooded hillside of pines and green oaks; being the said
windmill, abandoned for over twenty years, and not viable for grinding,
as it appears that wild vines, moss, rosemary, and other parasitic
greenery are climbing up to the sails;

"Notwithstanding the condition it is in and performs, with its grinding
wheel broken, its platform brickwork grown through with grass, this
affirms that the Mr Daudet finds the said windmill to his liking and
able to serve as a workplace for his poetry, and accepts it whatever
the risk and danger, and without any recourse to the vendor for any
repairs needing to be made thereto.

"This sale has taken place outright for the agreed price, that the Mr
Daudet, poet, has put and deposed as a type of payment, which price has
been redeemed and received by the Mr Mitifio, all the foregoing having
been seen by the lawyers and the undersigned witnesses, whose bills are
to be confirmed.

"Deed made at Pampérigouste, in Honorat's office, in the presence of
Francet Mamaï, fife player, and of Louiset, known as Quique, crucifix
carrier for the white penitents;

"Who have signed, together with the parties above and the lawyer after
reading it."

LETTERS FROM MY WINDMILL
FIRST IMPRESSIONS

I am not sure who was the more surprised when I arrived—me or the
rabbits…. The door had been bolted and barred for a long time, and
the walls and platform were overgrown with weeds; so, understandably,
the rabbits had come to the conclusion that millers were a dying breed.
They had found the place much to their liking, and felt fully entitled
to made the windmill their general and strategic headquarters. The
night I moved in, I tell you, there were over twenty of them, sprawled
around the apron, basking in the moonlight. When I opened a window, the
whole encampment scampered off, their white scuts bobbing up and down
until they had completely disappeared into the brush. I do hope they
come back, though.

Another much surprised resident was also not best comforted by my
arrival. It was the old, thoughtful, sinister-looking owl, a sitting
tenant for some twenty years. I found him stiff and motionless on his
roost of fallen plaster and tiles. He ran his large round eyes over me
briefly and then, probably much put out by the presence of a stranger,
he hooted, and painfully and carefully shook his dusty, grey
wings;—they ponder too much these owlish, thinking types and never
keep themselves clean … it didn't matter! even with his blinking eyes
and his sullen expression, this particular occupant would suit me
better than most, and I immediately decided he was only too welcome to
stay. He stayed right there, just where he'd always been, at the very
top of the mill near his own personal roof entrance. Me—I settled down
below in a little, whitewashed, vaulted, and low-ceilinged room, much
like a nun's refectory.

I am writing to you from my windmill, with the door wide open to the
brilliant sunshine.

In front of me, a lovely, sparklingly lit, pine wood plunges down to
the bottom of the hill. The nearest mountains, the Alpilles, are far
away, their grand silhouettes pressing against the sky…. There was
hardly a sound to be heard; a fading fife, a curlew calling amongst the
lavender, and a tinkle of mules' bells from somewhere along the track.
The Provencal light really brings this beautiful landscape to life.

Don't you wonder, right now, if I am missing your black and bustling
Paris? Actually, I'm very contented in my windmill; it is just the sort
of warm, sweet-smelling spot I was looking for, a long, long way from
newspapers, hansom cabs, and all that fog!… Also, I am surrounded by
so many lovely things. My head is bursting with vivid memories and
wonderful impressions, after only eight days here. For instance,
yesterday evening, I saw the flocks of animals returning from the hills
to the farm (the
mas
), and I swear that I wouldn't swap this one
hillside wonder for a whole week's worth of
Premieres
in Paris. Well,
I'll let you be the judge.

Here in Provence, it's normal practice to send the sheep into the
mountains when it's warm enough in the spring, and, for five or six
months, man and beast live together with nothing but the sky for a roof
and grass for a bed. When the first autumn chill is felt in the air,
they are brought back down to the
mas
, and they can graze comfortably
on the nearby rosemary-scented hills…. This annual delight, the
return of the flock, was accomplished last night. The double barn doors
had been left expectantly open since daybreak and the barn had already
been covered with fresh straw. There was occasional, excited
speculation about the flock's exact whereabouts; "Now they are in
Eyguières" or "They are in Paradou" was rumoured. Then suddenly,
towards evening, we heard a rousing shout of "Here they come" and we
could see the magnificent cloud of dust that heralded the approach of
the flock. As it continued along its way, it seemed to gather
everything into its path to join the great march home…. The old rams,
horns assertively pointing forward, lead the way, with the rest of the
sheep behind; the ewes looked tired out, with their new-born lambs
getting under their feet;—Mules bedecked with red pom-poms were
carrying day-old lambs in baskets and rocking them to sleep with a
gentle motion. Then came the breathless, overworked dogs, tongues
hanging out, in the company of two strapping shepherds in their red
serge, ground-hugging cloaks.

The whole parade filed merrily past before being swallowed up by the
open barn doors. They shuffled inside with a noise like a tropical
downpour…. You should have seen the turmoil inside. The huge, silken
tulle-crested, green and gold peacocks loudly trumpeted their welcome
as they recognised the new arrivals. The early-to-bed hens scattered
everywhere as they were woken up. All the pigeons, ducks, turkeys, and
guinea-fowl were running or flying wildly about. The whole poultry yard
was going absolutely mad!… You'd think that every single sheep had
brought back an intoxicating dose of wild mountain air in its fleece,
which had made all the other animals hopping mad.

In the midst of all this commotion, the flock somehow managed to settle
themselves in. You couldn't imagine anything more charming than this
homecoming. The old rams relaxed visibly at the sight of their home
farm, while the tiny lambs born during the descent looked all around in
astonished wonder.

But, it was the dogs that were the most touching, the gentle sheep
dogs, who had busily looked after their charges until they were all
safely back in the farm. The guard dog, barking from his kennel, did
his best to call them over, and the well-bucket, brimming over with
cool water, also competed to tempt them. But nothing, nothing could
distract them, at least not until the livestock were all safely inside
the pen, the small gate securely latched by its large bolt, and the
shepherds seated at the table of their low-ceilinged room. Only then
were they content to go to their dog pound, lap up their slop, and
spread the news to the other animals, of the adventures they had had in
the mountains—that mysterious world of wolves, and tall, purple
foxgloves brimming over with dew.

THE COACH FROM BEAUCAIRE

I took the coach from Beaucaire to get to my windmill. It was a good
old patache, a sort of rural coach, which, although it only made short
trips, dawdled so much that by the end of the day it had the wearied
air of having travelled a long way. There were five of us on top, plus
the driver of course.

There was a thick-set, hairy, and earthy-smelling Camargue Ranger, with
big, blood-shot eyes, and sporting silver earrings. There were two men
from Beaucaire, a baker and his dough mixer, ruddy and wheezy, as
befits their trade, but with the magnificent profiles of a roman
Emperor. Lastly there was this fellow; no, not a person, really, just a
cap. You were only aware of the cap … an enormous rabbit-skin cap. He
said little, gazing miserably at the passing road.

These characters, well known to each other, were speaking very loudly,
and even more freely, about their personal business. The Ranger
announced that he was making for Nîmes in response to a Magistrate's
summons for pitch-forking a shepherd. They're hot-blooded, these
Camargue folk. As for the men from Beaucaire; they were at each others
throats about the Virgin Mary. It appears that the baker was from a
parish dedicated to the Madonna, known in Provence as the Holy Mother,
and always pictured carrying the baby Jesus in her arms. His
dough-mixer, on the other hand, was a lay-reader at a new church
dedicated to the Immaculate Conception, whose icon showed her with open
arms and illuminated hands. The way they treated each other and their
respective Madonnas, had to be seen to be believed:

—She's no more than a pretty girl, your "immaculate" lady!

—Well, you know what you can do with your Holy Mother!

—She was no better around Palestine than she should have been, yours!

—What about yours, the little minx! Who knows what she got up to. Only
St. Joseph can answer that.

You'd have thought we were on the docks in Naples. In truth, it only
needed the glint of a knife blade, I'm sure, to settle this fine
theological point once and for all; that is if the driver hadn't
intervened.

—Give us some peace. You and your Madonnas! he said laughingly, trying
to make light of the Beaucairian dispute: it's women's stuff, this, men
shouldn't get involved.

He cracked his whip, from his high perch, as if to emphasise to his
lack of religious conviction and to bring the others into line.

End of discussion. But the baker, having been stopped in full flow,
wanted to continue in the same vein, and turned his attention towards
the miserable cap, still morosely huddled in its corner, and quietly
sneered:

—You there, grinder, what about your wife? What side of the parish
border does she stand on?

It was as though it was meant to be a joke; the whole cart-load of them
erupted into uproarious laughter … except the grinder himself, who
didn't react to the remark. This prompted the baker to turn towards me:

—You don't happen to know his wife do you, monsieur? Just as well;
she's a real queer fish; there can't be another one like her in
Beaucaire.

The increasing laughter left the grinder unmoved except for a whisper,
his eyes still downcast: