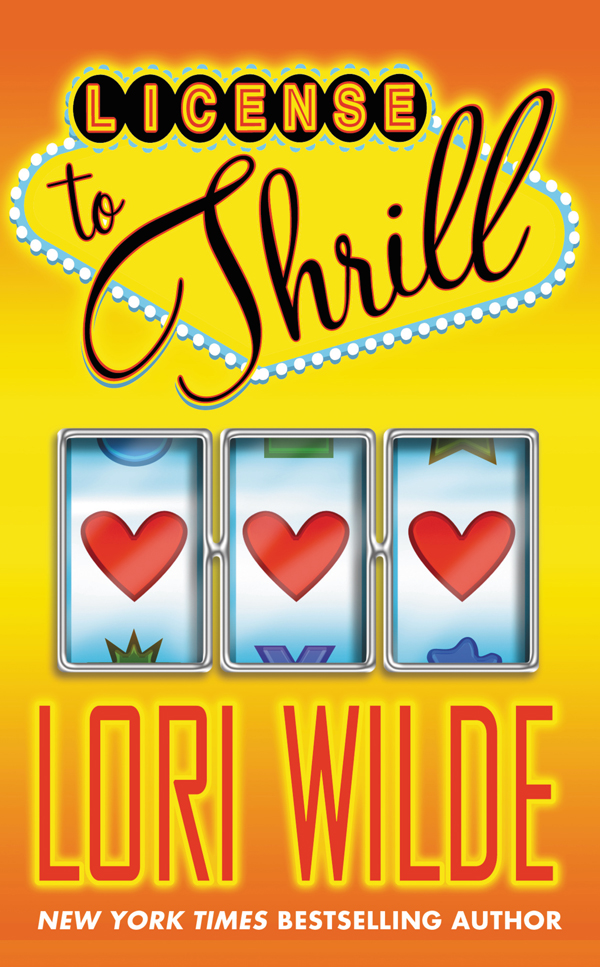 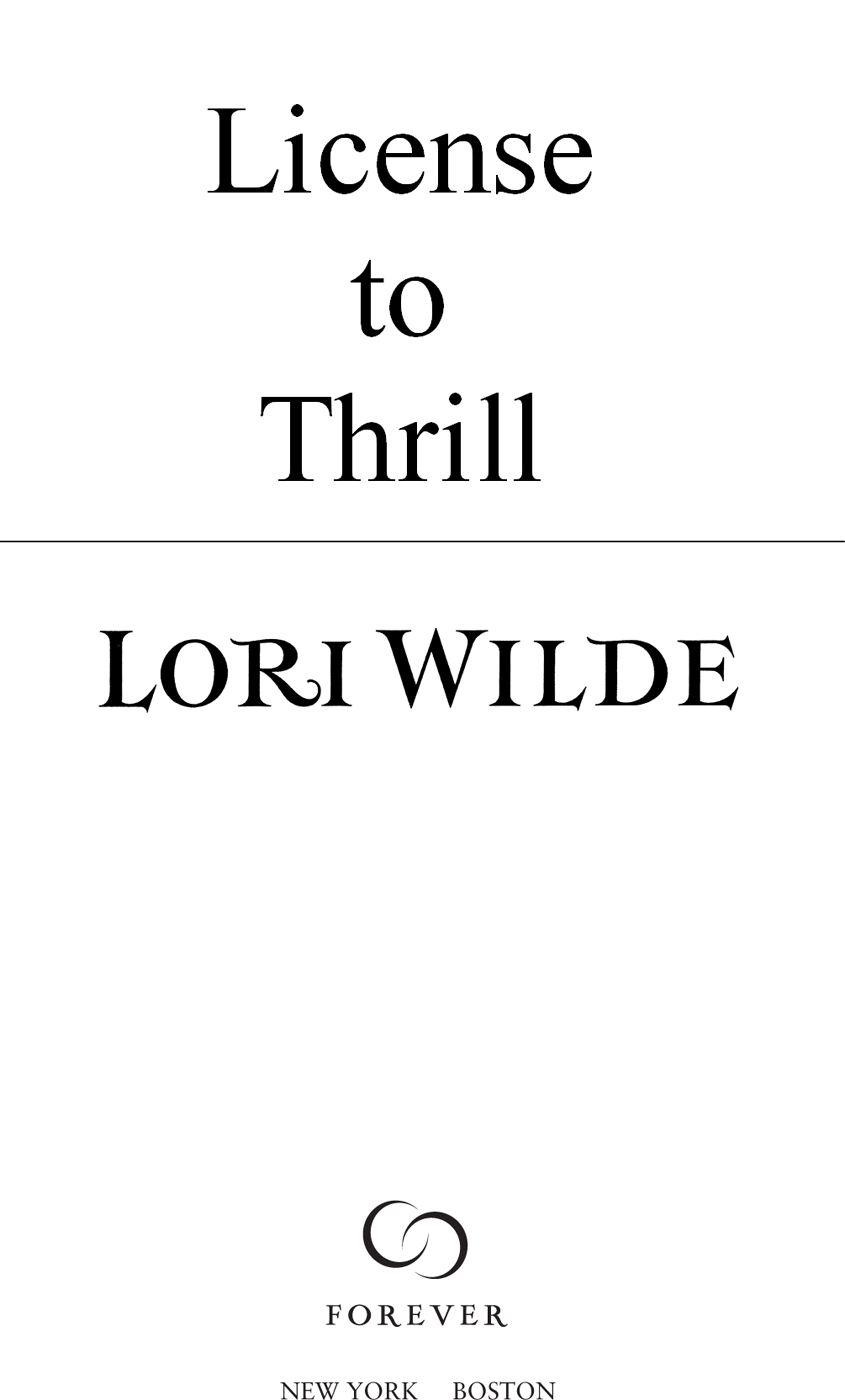 A Preview of
Kiss the Bride

To Beth de Guzman—for giving me the opportunity to shine. Your belief in me means more than words can say.

To the people who made this book possible: Thank you to my savvy agent Karen Solem, your knowledge of the publishing industry constantly amazes me. To my editor Michele Bidelspach, your guidance and insight were invaluable in shaping this book. And most of all, to my dearest friend Hebby Roman whose expertise on all things financial brought the whole plot together. You are appreciated.

In her five years as a Las Vegas private investigator, Charlee had never once lost her cool. Being alley-cornered at midnight by a stiletto-wielding transvestite produced nary a wobbly knee. Getting dragged ten feet behind a robbery suspect’s Nissan Pathfinder had created not a single spike in her pulse rate.

And just last week she’d averted disaster when she’d calmly faced down a halfdozen gangbangers and convinced them the banana in her jacket pocket was actually a forty-five-caliber Grizzly Magnum.

Cucumbers had nothing on Charlee.

But something about mean mama black widows and rich, long-legged, brown-eyed, handsome, matinee-idol-smiling, beard-stubble-sporting men slid right under her skin and wreaked havoc with her bravado.

She had earned both phobias legitimately. The spider heebie-jeebies dated back to an ugly outhouse incident in rural Wisconsin when she was twelve. She had never looked at a roll of toilet paper in quite the same way since.

Her second fear, however, was a bit more convoluted. At the same time George Clooneyesque men terrified her, she was wildly, madly, impossibly attracted to them.

And the scars from those mistakes, while less noticeable than the half-dollar-sized hole in her left butt cheek, were a sight more painful than any spider bite.

As a self-defense technique, she’d developed a highly honed sense of respect for her phobias. So when the hairs at the nape of her neck spiked that Wednesday afternoon in late March, she snapped to full alert.

She sat cocked back in front of the computer in her two-woman detective agency located in a downtown strip mall, her size ten, neon blue, Tony Lama boots propped up on one corner of the desk and her keyboard nestled in her lap. She was completing the final paperwork on a missing person’s case where she had successfully located a six-year-old girl snatched by her father after a custody dispute didn’t go in his favor.

Immediately, her gaze flew to the corners of the room. No sign of a black widow’s unmistakably messy cobweb. Slowly, she released her drawn breath, but the prickly uproar on the back of her neck persisted.

From the corner of her eye she spied movement on the window ledge. Something small and black and spindly-legged scurried.

Her boots hit the cement floor and her hand grabbed for a makeshift weapon, coming up with a well-thumbed, trade paperback copy of
Find Out Anything About Anyone.

Pulse pounding in her throat, she advanced upon the window.

The cool cobalt taste of fear spilled into her mouth. Her legs quivered like she had a neurological disorder. Instant sweat pearled into the delicate indentation between her nose and her upper lip.

She had to force each step, but finally she hovered within killing range. She raised the book over her head, sucked in her breath for added courage, and stared down at the intimidating creature.

Not a black widow after all. Closer scrutiny revealed the creature wasn’t even black.

Relieved, she sank her forehead against the window-pane and let the book fall from her relaxed grasp.

And that’s when she spotted him.

Zigzagging his way through the parking lot—looking utterly out of place in the Las Vegas desert in his rumpled Armani suit, dusty Gucci loafers, and a red silk tie that appeared to cost more than Charlee’s last tax refund check—meandered a fear far greater than a whole pack of poisonous arachnids.

Like a battalion of marines at roll call, her neck hairs marshaled to five-alarm status. She stumbled back to her desk, jerked open the bottom drawer, retrieved a pair of Nighthawk binoculars, fixed the scopes on him, and fiddled with the focus.

Hair the color of coal. Chocolate brown eyes. A five o’clock shadow ringing his craggy jawline. Handsome as the day was long.

Charlee gulped. Please let him go to the Quickee-Lube-Express next door. Or better yet, the massage parlor on the corner.

No such luck. He headed straight for the Sikes Detective Agency, a determined look on his face. The one thing she still had going for her—he wasn’t smiling. Charlee’s hand trembled so hard that she fumbled with the binoculars.

She had to do something. Quick.

For some unfathomable reason, guys like him were often attracted to her and she never failed to fall for their smiles and swagger. Call it a genetic deficiency. Her mother, Bubbles, God rest her soul, had been the same way.

When Charlee was seven, Tommy Ledbetter, the devastatingly cute son of the man who owned the used car dealership where her grandmother Maybelline worked as a mechanic, had lured Charlee behind the garage for a rousing game of I’ll-show-you-mine-if-you-show-me-yours.

She had obliged when he threw in a pack of Twizzlers as an added bribe, only to be caught red-hineyed by Mr. Ledbetter. Tommy, the wimp, had declared the whole thing Charlee’s idea. Maybelline had gotten fired over that embarrassing incident.

Then when she was fourteen and Maybelline was tending bar at an exclusive country club in Estes Park, Colorado, Vincent Keneer, whose father owned part interest in the Denver Broncos, stole a kiss from her on the ninth green. She was in seventh heaven for a few hours only to later overhear him laughing with his friends. “Getting Charlee to kiss me was easier than turning on a light switch,” he had bragged.

Charlee’s temper had gotten the better of her and she’d shoved Vincent into the deep end of the pool with his cashmere vest on. Maybelline lost that job too for refusing to make Charlee apologize.

And then when she was nineteen…

She closed her eyes and swallowed hard. No, she refused to relive
that
excruciating memory. Some cuts sliced so deep they never healed.

What was it about her? She must secrete some kind of take-advantage-of-me-then-break-my-heart pheromone. Or maybe it was like how cats seemed to know when you were allergic to them and they singled you out in a crowd and insisted on crawling into your lap.

Why buck the odds? She needed all the help she could muster. Charlee snatched open the desk drawers in a desperate search for any kind of a disguise. Nabbing a pencil from the cup beside her printer, she harvested her hair off her shoulders, wound the thick mass into a twist, and anchored it to the top of her head.

If he so much as cracked a grin, even a little one, she was a goner.

Okay, librarian hair wasn’t enough. She needed more. Charlee scuttled over to Maybelline’s desk and rummaged through the contents.

Ah-ha! Her granny’s spare pair of thick, black bifocals oughtta do the trick.

Charlee jammed the glasses on her face, grateful for the twofold shield. Now, not only would she look un-flirtworthy in the heavy frames, but also while peering through the blurry lenses she would be unable to fully ascertain his level of cuteness. She hazarded another quick peek out the window, but had to peer over the top of Maybelline’s glasses in order to see him without getting dizzy.

Who was this guy?

He stopped when he passed her cherry red 1964 Corvette convertible in the parking lot and ran a lingering hand over the fender like he was caressing a woman’s inner thigh. Charlee’s stomach fluttered as if he’d stroked
her
and her muscles tightened a couple of notches below her turquoise belt buckle.

Nah. She was ninety-nine percent sure she’d mailed her car payment, even though she did have a tendency to get so wrapped up in a case she sometimes forgot to eat or sleep or post her bills. Besides, the dude looked nothing like a repo man. Actually, he resembled a refugee from an investment banker caucus.

Or an escapee from a corporate law office.

Oh, no. Was Elwood in the pokey again and looking to her for bail money? Charlee shook her head. As if her no-account daddy could afford the services of a guy who dressed like a
GQ
cover model.

Her accountant Wilkie had warned her that being sued was an eventuality in her line of work and he’d encouraged her to take out more insurance. But between keeping the business afloat and bailing out her old man when he was in between his Elvis impersonating gigs and had succumbed to the lure of another get-rich-quick scheme, she didn’t have a lot of spare cash left over for frivolous things like insurance.

The guy had almost reached her door and Charlee, roosting on the verge of hyperventilation, did not know which way to jump. She stepped right, then left, ended up doing a strange little mambo, and finally jammed the binoculars under a chair cushion. She even considered ducking into the closet until he went away.

But what if he wanted to hire her? Business was business. She’d just completed her only pending case and she needed the money.

Yeah? So tell that to her stomach spinning like a whirligig in gale force winds. In the end, she leaped behind Maybelline’s desk and feigned grave interest in her blank computer screen.

The silver cowbell over the door tinkled.

Be strong. Be brave. Be badass.

Ah, damn. He possessed the deep, smoky voice of a late-night radio announcer. Charlee lifted her head and forced herself to look at the man standing in the doorway.

“Good afternoon,” she replied, her tone a couple of degrees above frosty. No sense making the guy welcome. If she was rude enough, maybe he would take a hike.

The top of his head grazed the cowbell, causing it to peal again.

Dear God, he was at least six feet three, maybe even taller. And no wedding band graced the third finger of his left hand. Charlee tumbled as if she were on an Alpine ski run, a beginner who had taken a wrong turn and ended up on the black diamond expert slope with nowhere to go but down, down, down.