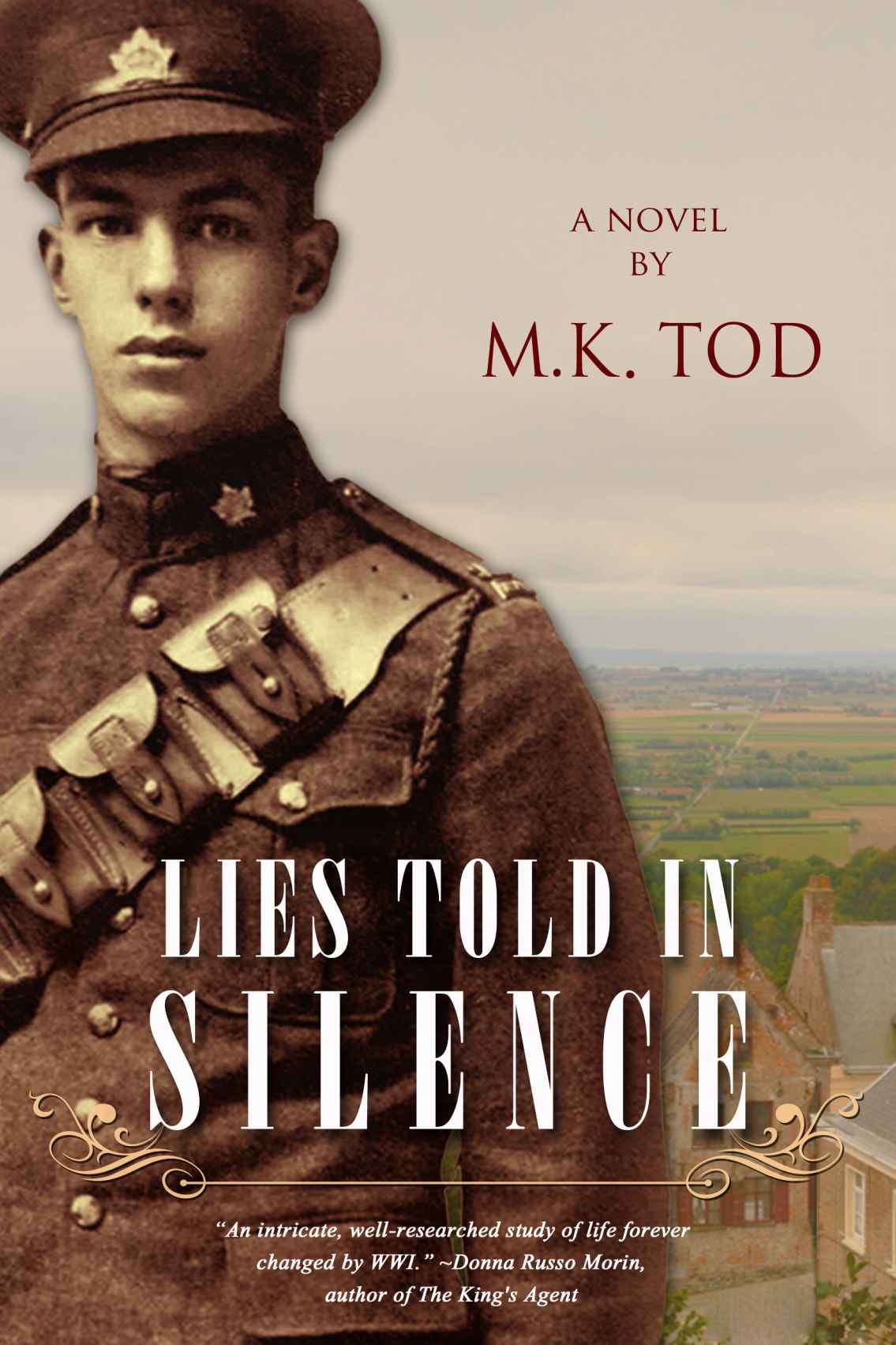 Praise for Lies Told in Silence

“
M.K. Tod brings WWI France to vivid life in LIES TOLD IN SILENCE. We come to care about her characters, whose secure, sheltered lives will never be the same. This is a novel that dramatically depicts the horror and heartbreak of war, while also celebrating the resilience of the human spirit.”

“Rich with distinctive details, LIES TOLD IN SILENCE, is a fully dimensional tale, a crisp rendering of war on all fronts. An intricate, well-researched study of life forever changed by WWI yet still sweet with the tender innocence of the age. With sterling prose, Tod captures the period and the nuanced tension of her story perfectly.”

“An exquisite tale of true love and living with the choices we make set amidst the tumultuousness of World War I. Compelling and poignant, I was deeply engrossed from the first page to the last, unable to pull myself away from Helene's story. M.K. Tod is a powerful new voice in the historical fiction genre and I eagerly await her next release.”

-
AMY BRUNO
Historical fiction blogger at Passages to the Past.

“In her accomplished second novel, M.K. Tod depicts the ruinous impact of war on human lives across the generations—young people, their parents, women, and soldiers. A multi-layered depiction of a French family adversely affected by World War I … an absorbing and rewarding historical read, well-timed for the centenary.”

“Readers of M.K. Tod's multi-generational WWI story will particularly enjoy seeing the war through the eyes of both men and women, and from the corridors of power to the front lines and small villages of northern France. LIES TOLD IN SILENCE is a compelling read right up to its taut page-turning ending.”

Tod Publishing may be contacted at [email protected]

The Author M.K. Tod may be contacted at [email protected] For more information, visit www.awriterofhistory.com.

Author’s Note: This is a work of fiction. Names, characters, places, and incidents are a product of the author’s imagination. Locales and public names are sometimes used for atmospheric purposes. Any resemblance to actual people, living or dead, or to businesses, companies, events, institutions, or locales is completely coincidental.

For Ian whose love, support and encouragement have made all the difference to my writing and to our life together.

Barely a hint of dusk lingered beyond the treetops when Helene heard the library door open. Though she had been attempting to read, the room overlooking the Bois de Boulogne was a perfect place for daydreaming, and that evening, as the sun scattered golden light across Paris, she had succumbed to thoughts of summer. Marking her spot in
Les Misérables
with a slender finger, Helene was about to call out when she heard the voice of her father’s close friend, Charles Ribot, saying that he was very fearful of Germany’s intentions.

Hidden behind the tall back of her chair, Helene waited, silent and still. Adults did not usually admit to fear, and she thought
Monsieur Ribot, with his scraggy frame and rasping voice, was a man who instilled fear in others rather than one who would be afraid of anything.

The words spread like a dark cloud preceding a storm, and the pit of her stomach quivered.

Newspaper headlines concerning European tensions alternated from alarming to soothing depending on the day. She knew France and Germany were deeply distrustful of one another, and France longed for the return of Alsace-Lorraine, but articles about
Britain’s naval superiority and antagonism between Austria and Serbia confused her. When she had asked her father to explain, Henri Noisette had replied that young women should not worry about politics.

“Germany will not rest until France is on her knees along with Britain and
Russia,” Monsieur Sembat said.

Curiosity surged.
Perhaps I will learn something
, she thought, continuing to eavesdrop as the three men moved farther into the room.

Helene had known her father’s two closest friends all her life and pictured them standing together, Charles Ribot, wearing gold-rimmed glasses that dominated his narrow face and bald head, and Maurice Sembat, punctuating each sentence with large, fleshy hands. Monsieur Sembat had the build of a stocky French peasant, although his family claimed to be descendants of the Bourbon dynasty. He and his wife, Adrienne, had six children, all boys. Occasionally, her father referred to him as “the bull”.

Her father, with his wavy black hair and thick eyebrows, would be offering a selection of cigars kept in a glossy wooden box bearing the family coat of arms—four fleurs-de-lis surrounding a lion and the words
faith and duty
across the bottom. Moments later, the lid closed with a snap.

“Lucille hates having these in the house,” said Monsieur Ribot. “Wonderful aroma. Cuban?”

“Mm hmm. A gift from the German attaché.”

“I hope that doesn’t make you beholden to the Germans
, Henri,” said Monsieur Sembat.

“Nothing w
ould make me beholden to them.”

Helene tilted her head. She knew that tone. It was the one her father used when attempting to control his anger, like the time Guy failed his history exam or the time Maman disclosed the purchase of diamond earrings at Sunday dinner. Clearly Papa was upset by
Monsieur Sembat’s implication.

The rasp of a match being struck and the sizzle of flame broke the silence.

Footsteps were followed by the gurgling sound of liquid then glass clinking glass and the rustle of clothing as the men settled int
o the library’s leather chairs.

Helene imagined the men with their brandies and cigars amongst the dark wood and heavy furniture of the library. Electric lamps gave a warm glow to the otherwise austere décor while plush Persian carpets added a hint of sensuality. Mounted behind her father’s ornately carved desk was a painting of a ship in full sail, angry waves butting against the starboard side, and on the horizon, the setting sun, all but
obliterated by thunder clouds.

“Thank you, Charles. Lise and I are pleased that he came to us after my father died. Lamb is his specialty.”

Helene could tell her father was preoccupied by his clipped tone and lack of elaboration. Normally, he would launch into a story about the famous people Chef had served.

“I wonder if the Balkans will be the trigger. It’s such a powder keg, full of nationalist sentiments and resentments.” Monsieur Sembat returned to the earlier conversation.

“And if it blows, you can be certain Germany and Austria-Hungary will quickly take advantage.” Helene’s father spoke with his usual authority. “Our army isn’t strong enough to intimidate them. Last week, Minister Noulens received a confidential report that Moltke believes France can be crushed within six weeks.”

“You have access to what the German chief of staff says?” Monsieur Ribot’s voice rose in astonishment.

Helene listened for Papa’s acknowledgement and concluded that he must have nodded at his friends, for he continued talking about Germany as though Charles Ribot had said nothing.

“Our source reports that Moltke has referred to the need to think very carefully when starting a war.”

“Starting a general European war?” Monsieur Sembat sounded agitated. “We must have a source very close to senior German officials if he can provide such information.”

A general European war. Papa and his friends sounded so serious that Helene knew their concerns were real. Fear swirled
with the looming possibility of danger.

“Of course, Henri, I wasn’t hinting for that at all. In Public Works, we are privy to some information but not as much as you must be in the War Ministry.”

Helene’s eyes widened at Monsieur Sembat’s statement. While she knew her father worked in the government, she had no idea he was in the War Ministry. Indeed, she was not even aware such a ministry existed. War.
Her stomach quivered once more.

The last war involving France
took place in 1870. In history class, she had studied the Prussian siege of Paris, including horrifying statistics on military and civilian fatalities, details of food and water shortages and the ultimate surrender of Alsace-Lorraine in exchange for peace. While Sister Louise read from their textbook, Helene had imagined the crashing sounds of artillery and filthy conditions of a three-month siege.

Will that happen again? If Papa is in the War Ministry, would he have to fight?

“Our alliance with Russia is strong, and we can count on Britain’s navy,” Papa said.

“
But how will that help? We all know the Kaiser will head straight for Paris,” Monsieur Sembat replied.

Helene resisted the urge to move. If the German army were to attack Paris, the whole family would be at risk. And all her friends. How would they live? How would they survive? She thought of the book resting on her lap, its story of the struggle for freedom and of sacrifice for the greater good. So many innocent lives struck down. Helene wondered whether she should ask Guy to explain the situation in more detail and lost track of the m
en’s conversation for several minutes until Monsieur Sembat’s angry voice broke through.

“. . . behaving like a cornered dog because she feels squee
zed between Russia and France.”

“Yes,
Germany’s fangs are out, but I think it’s Austria we have to worry about,” said Monsieur Ribot. “Serbia has ambitions for expansion, and I would bet money that Austria has plans to attack Serbia.”

“If Austria attacks, Germany is bound by treaty to join the conflict,” her father said.

“German foreign policy has been dominated by military issues for years,” said Monsieur Sembat. “I do not understand why that country has always been so belligerent.” Helene heard liquid spilling into a glass. “Anyone else?” he asked.

“I wonder if Poincaré has the guts for war,” said Papa. “He has certainly become more assertive. At any rate, the general feeling is that our Entente is now much stronger, although Britain resists signing an official treaty.”

If Austria and Serbia went to war, Germany was bound to support Austria. Helene knew that much. She also knew that the Entente was a similar agreement between France and Russia in the event of war.
This can’t be happening.
A sudden thought made her skin crawl with anxiety.
Guy is old enough to enlist.
Helene did not want to imagine what might happen to her older brother, so she focused once again on the conversation taking place in the library. Though she found their discussion confusing, the men’s quiet tones and lack of laughter were foreboding.

After awhile, her father suggested they join the ladies, and she heard them stand and walk towards the door.

“There’s no doubt in my mind,” her father said. “We’re heading for war. The only question is when.”

Like Veins of Red Rubies (Most Precious Book 1) by Abel, Nicolas
The Wives of Los Alamos by Nesbit, Tarashea
Clockwork Twist : Waking by Emily Thompson
The Streets of Ashkelon.azw by Unknown
The Back-Up Plan by Debra Webb
Sparring With Hemingway: And Other Legends of the Fight Game by Budd Schulberg
Shoes for Anthony by Emma Kennedy
Bend Me, Break Me by Cameron, Chelsea M.
You Don't Love This Man by Dan Deweese
Sweet One (Titan Book 8) by Cristin Harber
Our partner