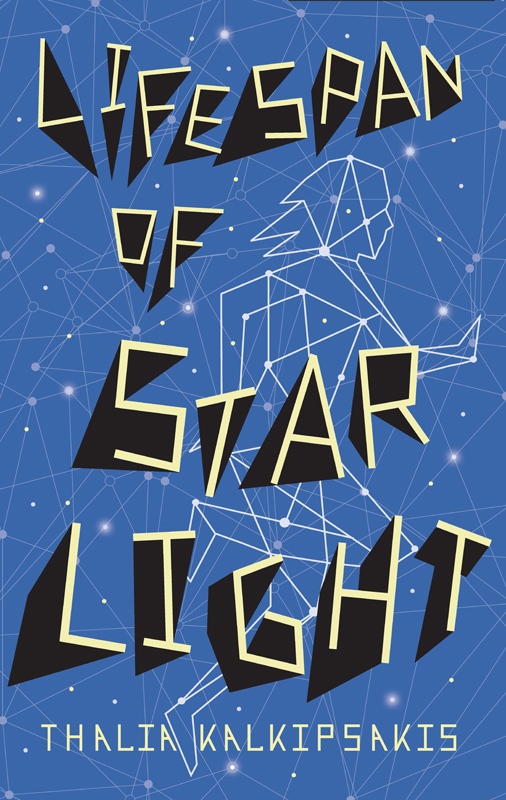 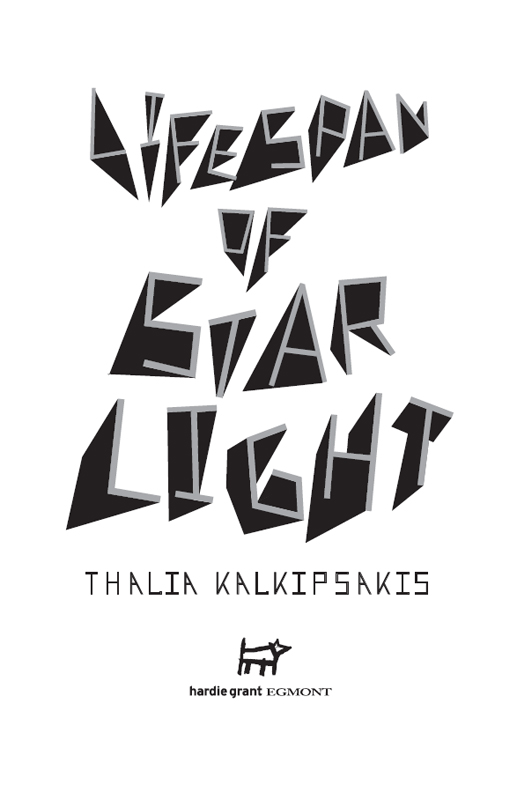 Life can only be understood backwards;
but it has to be lived forwards.
Søren Kierkegaard

J
UST STEPPING OFF
the curb takes all the courage I have. An intake of air and I
bail
out,
my toes gripping the soles of my boots for all I’m worth and the rest of me teetering
over the edge. A car flashes past and I jump back. That was close.

From a distance comes the high-pitched hum of another one. But from which direction?
These stupid smartcars are so fast; you’re still registering that one is coming when
it’s already on top of you. The hum rises in pitch until,
voom
. A flash of metal
and the rush of air. Right to left.

I make a note. That’s the sound I’ll need to recognise if I’m going to make it across.
But then, another.
Voom
. The same hum, except this one is left to right. I didn’t
pick the difference.

Come on, Scout. You can do it.
But still I don’t move. Instead I check over my shoulder
in case someone’s coming who will trigger the crossing point for me. During the day
that’s all it would take. Just hang around until someone walks up. But it’s
late
now, after ten, and who would be heading over to the park at this hour? For a start,
it’s locked.

My fists clench, trying to muster the strength, a barrier maybe against those speeding
metal bullets. Another car zooms past. This is so stupid.

I could make it across easy if I had my compad, though by ‘my’ I really mean Mum’s
old one. Calling it my lifeline is no understatement. I’ve set up a shortcut that
triggers a crossing point the same as if I were chipped, complete with a cleanup
bot that removes any trace of me hacking into the system.

But the compad is still sitting in a dock next to the door at home. In my anger,
I didn’t grab it on my way out like I normally do automatically. But even when I
realised I didn’t have it, I couldn’t go back. Not after what I’d said to Mum.

I don’t need your help anymore, all right? I can handle it on my own …

Even the memory of it makes me cringe. She actually did a double-take when I said
that, she was so surprised. Disappointed, maybe, too. But even after all that Mum’s
done for me, all that she’s given up, I still wasn’t expecting her to suggest what
she did.

The memory of our argument lifts my resolve, as if crossing the road is a way to
prove that I
can
handle it all on my own. To Mum, but also to myself.

There’s just the small matter of working out how.

When I next pick a car in the distance, I count under my breath until it flashes
past. Three cats-and-dogs. That means
three seconds is the time I’ll have to bolt
across two lanes to the centre of the road. Could I do that? Maybe.

I just have to go for it, I decide.

One foot in front of the other, arms ready, a sprinter at the starting line: my eyes
focus on the raised median strip in the middle of the road. It seems so close.

Another car flashes past, left to right. As soon as it’s out of earshot, my ears
buzz with the strain of listening for more hums.

So I bolt. Across two empty lanes to my island refuge in the centre of the road.
Panting, but safe. Too easy. I feel stupid to have waited so long.

An alarm sounds, and I realise my mistake. It must have a movement sensor set up
to detect stray dogs that might wander onto the road. The screech of it fills my
mind with blind panic. This is bad. Can’t let them see I’m
not
a dog. The next thing
I know I’m sprinting across the final two lanes, my only thought to escape any traffic
cameras.

At the back of it all, I also hear another sound – a high-pitched hum drawing closer.
A smartcar is coming straight at me.

I turn to see the approaching lights as I run, and in that split second the whole
world seems to stall. Each moment feels like a million, everything happening in slow
motion.

As soon as my foot touches the curb, everything snaps back to normal. The alarm goes
quiet, but as the car passes, I get this flash of some guy who’s just glanced up
from his screen, his mouth in a zero as he sees that it was
me
on the road.
This
basically sums up the story of my life: stuck on the outside, looking in. A stray
on the edge of society.

I cringe and do this awkward wave that’s meant to mean:
my mistake …
But the car
is gone before the guy has time to react. I don’t hang around, just head straight
for my gap in the fence and slip through into Footscray Park. Made it.

Here at least, there’s somewhere I can relax. If you cut across the garden bed near
the main entrance you’ll come to a section of retaining wall that has crumbled, collapsing
in on itself to form a broad cave. Inside, the walls are damp from the trickle of
an underground spring that must have washed away soil and mortar over the years.
Lucky for me you can’t see a thing from the path because the whole lot is hidden
behind spiky bushes and the thick trunk of a ghost gum.

I discovered the cave years ago when I was hiding from a park council worker after
scooping a bucket of water from the Maribyrnong Canal. He didn’t bother chasing me,
of course. He didn’t need to. He just triggered an alarm on his compad to alert the
police. Then he looked for my chip on the grid so he could tag it with a crim suspect
stamp.

What the park council worker didn’t know, unhappily for him, is that I’m illegal
which means I’m not chipped. My wrist is as smooth as the day I was born. The only
reason I’m alive is that Mum bribed her GP into signing a form saying that she’d
had an abortion. So all I had to do when the council worker triggered the alarm was
find a half-decent hiding place and I was totally off-grid.

I didn’t want to lose any water from the bucket by running so I did this weird sort
of speed walk, taking care to hold the bucket high and in both hands. I even remember
glancing over my shoulder and calling ‘sorry’ as I escaped up the path because, you
know, even though I’m illegal I’m not a bad person.

The guy didn’t even look up though. He just kept frowning at his compad, not getting
it at all, wasting time tapping at his screen before he realised that in order to
catch me he had to actually watch where I went. I was only planning to crouch behind
those spiky bushes but once I did, I discovered the cave, complete with underground
spring.

I haven’t had to steal from the canal since then. The water is achingly cold and
tastes faintly of moss, way better than anything that comes out of the potable tap
in our room. But it’s not just thirst that draws me to the cave tonight.

I need space to think.

The first thing I notice as I duck into the cave is that my picnic blanket has been
moved. Lately I’ve been spending more time in here and I’ve stashed a few things
away. Blanket. Water container. Pocketknife and hand shovel from when I tried to
grow potatoes and failed.

There’s not much moonlight to see by, but my eyes adjust quickly. As they do, I freeze.
The blanket has been moved because someone is
lying
under it.

Slowly I back away, ready to run. For all I know, the woman under the blanket is
a council worker in disguise. I’m almost out of the cave when something changes about
the woman.
Maybe it’s a play of shadows, but her frame appears to flicker, as if
she’s a hologram or something. Even though I’m not sure what just happened, it’s
enough to make me stop.

When she comes into focus again, the woman breathes in quickly, her cracked lips
lifting gently at the corners. Her face is so far out of step with the state of her
body that still I just stare. She’s little more than a bag of bones, way skinnier
than I am. One cheek is cracked and bleeding. And yet, her expression …

I stumble forwards and drop to my knees, reaching for her hand and then pulling back
when I see two of its fingers are swollen and black. My hand lands on a bony shoulder
instead.

‘Are you all right?’ I ask, which is about the dumbest thing anyone could say because
clearly she is anything but all right.

Her eyes shift my way but her only response is to pant.

‘I’ll call for help. Where’s your compad?’ I lift the blanket to search then drop
it after an eyeful of skin and a whole face full of stale sweat stink. Fantastic.
The woman is naked and the number of compads between the two of us is a sum total
of zero.

‘Listen,’ I lean closer, trying not to breathe in her stench. How do I explain to
her that I don’t have my compad? It’s like trying to tell her that I forgot to bring
my left arm. ‘I have to go and get help, okay? I’ll come back …’ I say it loudly,
as if making the words clear will somehow help her understand.

She turns my way slowly as if only now aware I’m here, so I try again. ‘I’ll go and
get help, okay?’

Her smile – that strange expression of bliss – fades slightly and her lips part to
let out the faintest breath. ‘No.’

‘No,’ she manages again, firmer this time. Then, still weak, ‘Please.
Stay
.’

Every cell in my brain is telling me this woman needs to be in hospital. Even the
smell about her is wrong. The stench of death. But she keeps her eyes on me as if
waiting for my response, a promise. And so I tuck one foot under my butt, terrified
of what I’m saying. ‘Okay. I’m here.’

Her eyes track away from me once I say that. She seems to concentrate on something,
her breathing slow and deliberate. I hold onto the sound.

I’m not sure how long we stay that way but it feels like ages. Each second draws
out longer than the last. We reach a point when her breathing changes, seems to fade
and almost stop, and I find myself watching her chest for movement.

After a while I begin to wonder whether she’s even aware that I’m here. Maybe I could
sneak away and call for help. But something keeps me. She wanted me to stay, and
even though there’s a difference between what she wants and what she needs, I keep
my promise. Maybe because I know better than anyone how it feels to be alone. Or
maybe because part of me knows I wouldn’t make it back in time.