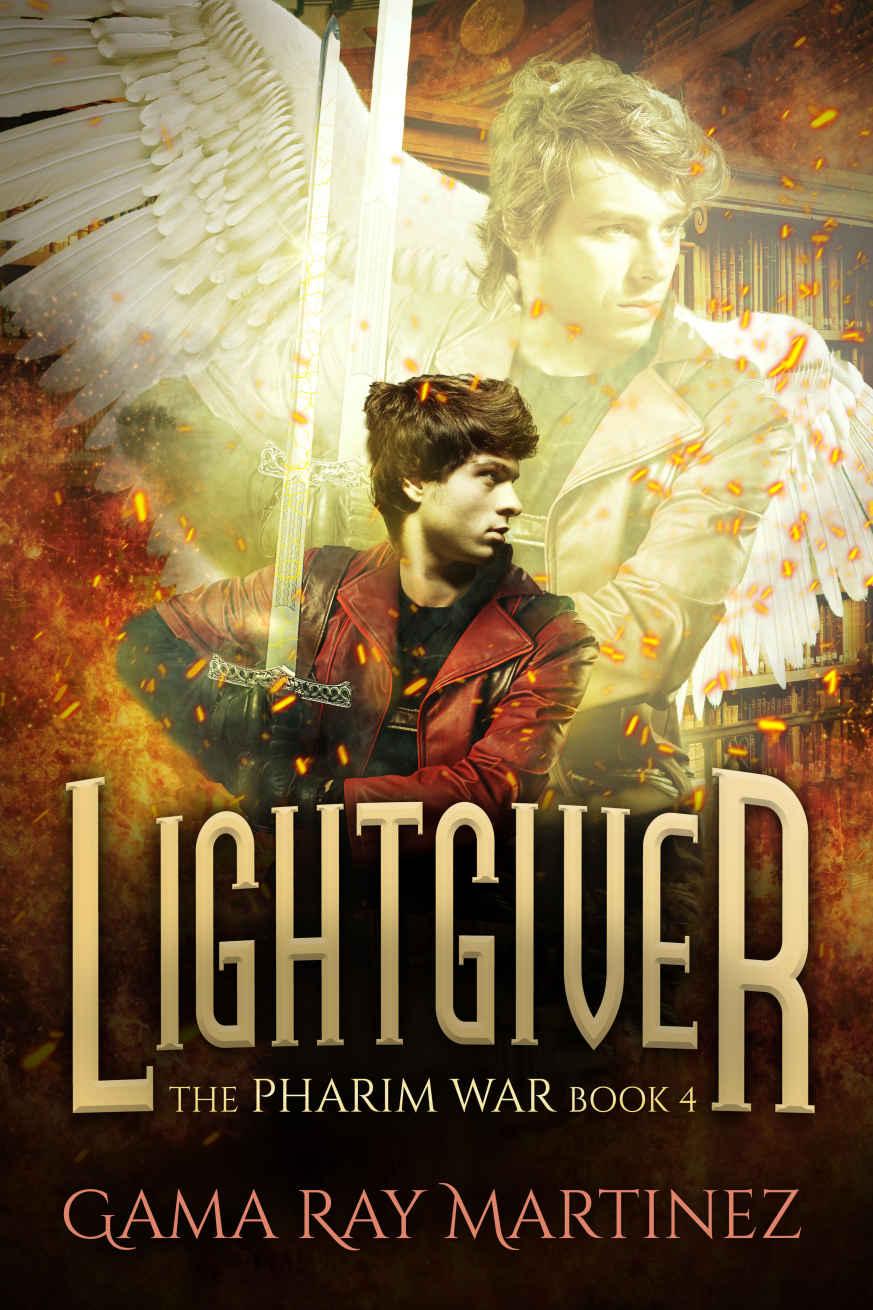 Lightgiver
is a work of fiction. All incidents and dialog, and all characters are products of the author’s imagination and any resemblance to actual events or locales or persons, living or dead, is entirely coincidental.

Jez brought the hammer down hard as he sent a flow of terra magic into the long slender piece of metal. The magic crystallized on the blade, seeming to form veins of gold through the steel. Again and again, he struck. He could only work for a few seconds at a time before the metal cooled and he had to put it back into the forge. Still, his arm burned with the effort, and his back ached. Burns covered his leather apron, but the garment hadn’t protected him completely, and he had more than a few blisters where he had been careless.

He put the metal in the fire and jumped when a hand touched his shoulder. He turned to see Master Besis, the protection master of the Carceri Academy. Besis was a large man with the build Jez would expect to see on a blacksmith or someone of a similar profession, which wasn’t surprising given that, among other things, the dominion of protection encompassed the study of earth. The master sighed and shook his head.

“You know, I didn’t even bother to go looking in your room this time. When was the last time you were actually in it?”

Jez stretched his muscles and tried to work out the aches in his arms and back. He was surprised to realize that, at some point, the sun had set, and it was now full dark. Only the forge provided any illumination. Besis gave the small stack of books that had been shoved into one corner a sidelong glance, no doubt realizing where they must’ve come from. Besis’s own secret library held many volumes describing dangerous magics such as those used to create this sword.

“I took a bath there this morning.” He shook his head to clear his thoughts. “Wait what day is it? That might’ve been yesterday.”

“Jez, you spend every spare moment either here or in the library. You can’t keep doing this. There’s not even a need. Sharim is gone.”

“You can’t go into the abyss and come out again.”

“Demons do,” Jez said as he pulled the metal out of the fire and started hammering again. Besis waited as Jez banged out the final shape before sticking it back into the forge.

“He’s not a demon.” Jez raised an eyebrow at that, and Master Besis threw up his arms. “Okay, he is a demon, but he’s also a human. At worst, he’ll be killed, and he can come back as an ordinary demon, bound by all the same laws they are.”

“He wouldn't have run there if he didn’t have a way back.”

“And do you have any idea what that is?”

Jez shook his head and waved at a clay tablet he’d set on a table amidst the blacksmithing tools. Besis glanced at it and glared at him. It was one of the oldest pieces of writing in the protection master’s secret library, and he hated for such things to be removed, but he had given Jez certain privileges. For his part, Jez only had a basic grasp of the language on the tablet, and it would probably take him hours to read through this small portion of text. “Not yet.”

“Jez, please, get some rest for a change. I know you’re strong, but even you can’t keep this up.”

Jez pulled the sword out of the fire and dipped it in an oil barrel to quench it. A quick application of terra magic cleaned the blade so that the steel and the gold veins within it, glimmered in the firelight. He placed it back in the forge, in the coolest part of the fire where it would be tempered. Then, he turned back to the master.

“Six months ago, Sharim almost destroyed an entire order of pharim. Are you willing to risk him doing the same thing again? We have to find him.”

Besis put a hand on his shoulder, and Jez looked up. “Jez, he went into the abyss of his own free will. Even if someone opened another portal like the one you closed at Rumar Keep, he wouldn’t be able to get through.”

Jez pulled out the blade and quenched it once more. With a burst of terra magic, he attached the hilt he’d forged earlier that day. He wrapped a band of leather around it to give him a better grip and examined the blade. It was well balanced, and if he concentrated, he could feel the gentle hum of power within. He couldn’t help but smile. For too long, he’d wielded the blade given to him by the evil mage Dusan. It felt good to have his own weapon, but his smiled faded when he looked at Besis.

“I’d feel better if I could be sure.”

Besis tapped the clay tablet. Jez glanced at it and then to his stack of books. These only represented his latest attempts at finding answers. Besis’s secret library contained volumes of information considered too dangerous for the common student. Jez had practically begged Besis for an entire term to grant him unrestricted access to it. Even knowing what he did about Jez and the battles he’d fought, the master had been hesitant, though he had eventually relented.

“You won’t find your answers in any tome I hold.”

Jez looked away. “The other masters won’t let me into their libraries.”

“That’s not what I mean. You’ve spent months searching for definite knowledge of the abyss from volumes written by people who had no way of knowing, and when you couldn’t find that knowledge, you constructed a weapon, hoping it would keep you safe. Did you ever consider other sources for the information you seek?”

Jez nodded. “Villia won’t talk about it, and I haven’t been able to get ahold of Welb since we left the beast men’s valley. Hopefully when Osmund gets back...”

A few months before when Jez, along with his friends Osmund and Lina, had gone to the beast men’s valley, they had encountered a group of former shapeshifters who existed halfway between the form of a beast and that of a man. They claimed to be able to help Osmund find balance between his conscious mind and that of his alter ego, the scion Ziary. When Jez and Lina had left, Osmund remained, promising to return to the Academy eventually.

Besis smacked his forehead with his palm. “Oh, I’m sorry. That’s the whole reason I came to find you. Osmund sent a message from Hiranta. He arrived just after sunset and stopped only long enough to use our speaking stone there. We advised him to wait until morning, but he insisted he could make it and started up the mountain. He’ll be here around dawn.”

Jez shot to his feet. Excitement surged through him, and not just to see his friend. They’d found one other thing among the beast men of the valley. Welb, the former pharim, had been living among them for centuries, wanting nothing more to do with the world of men. Still, he had knowledge that no mortal possessed, and if Osmund had spent any time with him, he would’ve tried to get information about how Sharim could escape. With a little luck, Jez’s search might finally be over.

The city of Tarcai, home of the Carceri Academy, sat in the caldera of a fire mountain. Overlaid with obsidian, the buildings glimmered in the light of the sprising sun, but Jez’s attention was focused outward. He, along with Lina, waited eagerly on the lip of the caldera and looked to the path leading down from the city. Fair skinned, Lina wore a hat to protect herself from the sun. Her golden hair fell to her shoulders. Neither had said anything for several minutes when Lina turned to him and wrinkled her nose.

Jez shrugged. “Sorry, I spent all day at the forge.”

She rolled her eyes. “Couldn’t you at least have taken a bath first?”

Jez raised an eyebrow. “You do realize he’s been in the jungle for the past six months, right?”

She let out a breath but didn’t answer. In spite of his purported smell, she sat down near him as they waited. It was a hard trail up the mountain, and most who ascended it did so by mule. That took most of a day, though, switchbacks and steep climbs could be taken to speed up the journey if one went by foot, as Osmund had often done. Just after dawn, a hulking form came into view.

Osmund had always been tall, nearly seven feet. As a student of destruction, he was especially gifted in pyro and venta magic. He’d also studied the more mundane areas of the dominion and had worked with weapons of all sorts. That training had hardened his muscles. Osmund had always looked formidable, but his time among the beast men had obviously changed him. His skin had darkened from spending so much time in the sun. He was broader of the shoulders, and his eyes constantly darted around as if looking for prey. He still wore a sword at his hip, though the wooden handle had been replaced by one of wrapped leather. As soon as he saw Jez and Lina, he smiled, though he never stopped examining his surroundings. When he got close, he broke into a run. Jez yelped as the larger boy effortlessly swept both him and Lina into his arms.

“It’s so good to see you.” At the sound of the laughter in Osmund’s voice, the unease that had begun to creep into Jez melted away. “You didn’t have to meet me here, though.”

Jez smiled as Osmund put them down. “You see, Lina? I told you we didn’t have to come.”

She gave him a mock glare. “As I recall, you’re the one who woke me an hour before sunrise, insisting we needed to come here as soon as possible.”

The Orb And The Spectre (Book 2) by Martin Ash
Royal Wedding Threat by Rachelle McCalla
Passion in the Heart by Diane Thorne
Spirals in Time: The Secret Life and Curious Afterlife of Seashells by Helen Scales
All or Nothing by Natalie Ann
Just My Luck by Rosalind James
Crimes Against Magic by Steve McHugh
No Price Too High by Jo Ann Ferguson
Tread Fearless: Survival & Awakening (The Gatekeeper Book 4) by Kenneth Cary
Dark Surrender by Mercy Walker
Our partner