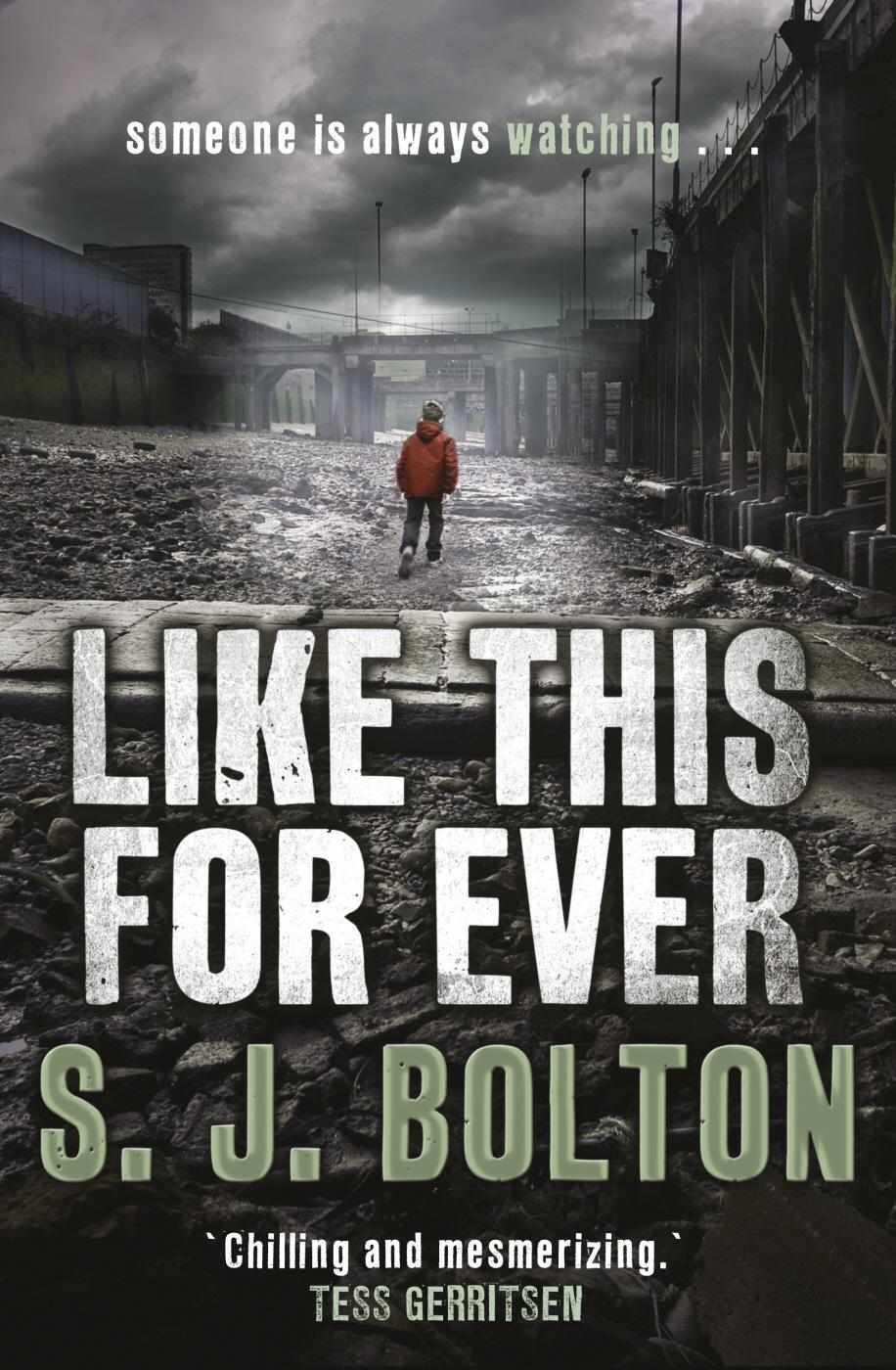 Barney knows the killer will strike again soon. The victim will be another boy, just like him. He will drain the body of blood, and leave it on a Thames beach.

There will be
no clues
for detectives Dana Tulloch and Mark Joesbury to find.

There will be
no warning
about who will be next.

And no chance that she can stay away
.

For Hal, who peeps out at me through every child in this book; and for his mates, who gamely played along.

‘Do you not know that tonight, when the clock strikes midnight, all the evil things in the world will have full sway?’

‘
THEY SAY IT’S
like slicing through warm butter, when you cut into young flesh.’

For a second, the counsellor was still. ‘And is it?’ she asked.

‘Well, granted, the first part’s easy. The parting of the skin, that first rush of blood. The knife practically does it for you, as long as it’s sharp enough. But after that first cut you have to work pretty hard.’

‘The body’s fighting you, for one thing. From the moment you cut, it’s trying to heal itself. The blood starts to clot, the artery or vein or whatever it is you’ve opened is trying to close and the skin is producing that icky, yellowy stuff that eventually becomes a scab. It’s really not easy to go beyond that first cut.’

‘It seems to be largely about the first cut for you, would that be fair to say?’

The patient nodded in agreement. ‘Definitely. By the time the knife touches skin, the noise in my head is close to unbearable – I feel like my skull’s about to blow apart. But then there’s that first drop of blood, and the next, and then it’s just streaming out.’

The patient was leaning forward eagerly now, as though the act of confession, once begun, was unstoppable.

‘I’ll tell you what it’s like – it’s like that first heavy snowfall in winter,
when suddenly everything’s beautiful and the world falls silent. Well, blood does exactly the same thing as snow. Suddenly, the pain means nothing, all that noise in my head has gone away. Somehow, with that first cut, I’ve gone to another place entirely. A place where, finally, there’s peace.’

Gently, almost apologetically, the counsellor closed her notebook. ‘We’re going to have to stop now,’ she said. ‘But thank you, Lacey. I think, at last, we’re getting somewhere.’

THE SADNESS WAS
inside him always. A dull pressure against the front of his chest, a bitter taste in his mouth, a hovering sigh, just beyond his next breath. Most of the time he could pretend it wasn’t there, he’d grown so used to it over the years, but the second he felt his focus shift from the immediate on to the important there it was again, like the creature lurking beneath the bed. Deep, unchanging sadness.

Barney waited for Big Ben to strike the fourth note of eight o’clock before pushing the letter into the postbox. The sadness faded a little, he’d done everything right. This time could work.

Important task over with, he felt himself relax and start to notice things again. Someone had tied a poster to the nearest lamppost. The photograph of the missing boys, ten-year-old twins Jason and Joshua Barlow, took up most of the A4 sheet of card. Both had dark-blond hair and blue eyes. One twin was smiling in the picture, his new adult teeth uncomfortably large in his mouth; the other was the serious one of the pair. Both were described as 1.40m tall and slim for their age. They looked exactly like thousands of other boys living in South London. Just like the two, possibly three, who had gone missing before them.

Someone was watching. Barney always knew when that was
happening. He’d get a feeling – nothing physical, never the prickle between the shoulder blades or the cold burn of ice on the back of his neck, just an overwhelming sense of someone else’s presence. Someone whose attention was fixed on him. He’d feel it, look up, and there would be his dad, with that odd, thoughtful smile on his face, as though he were looking at something wonderful and intriguing, not just his eleven-year-old son. Or his teacher, Mrs Green, with the raised eyebrows that said he’d been off on one of his daydreams again.

Barney turned and through the window of the newsagent’s saw Mr Kapur tapping his watch. Barney kicked off and in a steady glide reached the shop door.

‘Late to be out, Barney,’ said Mr Kapur, as he’d taken to doing over the last few weeks. Barney opened the upright cool cabinet and reached for a Coke.

Barney handed over his money and tucked the can in his pocket. ‘You going straight home now?’ asked Mr Kapur, his last words drowned by the bell as Barney pulled open the door.

Barney smiled at the elderly man. ‘See you in the morning, Mr Kapur,’ he said, as he pulled the zip of his coat a little higher.

There was a fierce wind coming off the river as Barney picked up speed on his roller blades and travelled east along pavements still gleaming with rain. The wind brought the smell of diesel and damp with it and Barney had a sense, as he always did, of the river reaching out to him. He imagined it escaping its confining banks, finding underground passageways, drains, sewers, and seeping its way up into the city. He could never be near the river without thinking of black water flowing beneath the street, an invasion so subtle, so cautious, that no one except him would notice until it was too late. He’d confided his fear once to his dad, who’d laughed. ‘I think you’re overlooking some basic laws of physics, Barney,’ he’d said. ‘Water doesn’t flow uphill.’

Barney hadn’t mentioned it again, but he knew perfectly well that sometimes water did flow uphill. He’d seen pictures of London submerged by floodwater, read accounts of how high spring tides had
coincided with strong downstream flows and the river’s cage had been unable to contain it. Given a chance of freedom, the water had leaped from its banks and roared its way through London like an angry mob.

It could happen. There had been snow in the Chiltern Hills. It would be melting, the thaw water making its way down through the smaller tributaries, reaching the Thames, which would be getting fuller and faster as it neared the capital city. Barney picked up speed, wondering how fast he’d have to skate to outrun floodwater.

When Barney reached the community centre the building looked deserted. No lights, so even the caretaker had gone, which meant it had to be after nine o’clock. With a familiar feeling of dread, he looked at his watch. He’d said goodnight to Mr Kapur just after eight o’clock. The newsagent’s was a ten-minute skate away. It had happened again. Time, inexplicably, had been lost.

A voice from beyond the wall, the sound of wheels on iron. The others were waiting for him in the yard, but suddenly Barney wanted nothing so much as to go straight home. Sooner or later – sooner if he was smart, and he was, wasn’t he? Everyone agreed that Barney was clever, a bit weird sometimes, but bright – he would have to tell someone about these missing hours of his.

A low laugh. He thought he heard his own name. Barney pushed the worry to the back of his mind and carried on round the corner. The community centre had once been a small Victorian factory. Surrounding it were various outbuildings and a tarmac yard, all encased within a high brick wall topped with iron railings. Inside the main building were a library, a crèche for pre-school children, an after-school club and a youth club. Barney and his friends hung out at the youth club several nights a week, but it was after the centre closed that the place became their own.

In the alleyway at the back, Barney reached for the loose railing and got ready to pull himself up.

In this city, someone is always watching.

What was that doing in his head right now? Why, now, should he remember the talk they’d had at school from the local community police officer? She’d been talking about how every Londoner could
expect to be caught on CCTV several hundred times a day. But Barney knew for a fact there were no cameras in the alley and the surrounding streets, or overlooking the centre. It was one of the reasons his gang hung out here.

He ran his eyes along the row of houses opposite, looking for the light in the window, the undrawn curtains, the gleam of eyes that would confirm what he knew – that someone was watching. Nothing.

Except they were, and with that certain knowledge came a knocking in his chest as if his heart had suddenly moved up a gear. OK, here he was, in the city where five boys his age had disappeared in as many weeks, on his own in the exact part of London where they had all lived, and someone he couldn’t see was watching him.

Barney scrambled through the gap in the railings, skates still on his feet, knowing it was a stupid thing to do, but adrenaline and determination just about kept him the right way up. He rolled forward. Right, which side of the wall were the eyes? Street side or factory side? Cut off from him by nine feet of solid Victorian brickwork and iron railing, or trapped inside with him? The contents of his stomach turned to something like cold lead as he realized he might just have made the biggest mistake of what was going to be a very short life.

He could no longer hear the others. For now it was just an eleven-year-old boy, a very high wall, and an unseen pair of eyes.

Directly ahead, between Barney and the main yard, was the Indian village: five small wigwams in which the younger kids played during the day. Even on a normal night, Barney couldn’t look at them without imagining someone – maybe a toddler left behind by an absent-minded parent – peeping out at him from the blackness. He never liked being near the Indian village at night, even without … he checked each dark interior in turn before moving on. Nothing.

Circle of Deception by Swafford, Carla
0.5 Meeting Monday by Robert Michael
Grandpa's Journal by N. W. Fidler
Duchess of Sin by Laurel McKee
Too Near the Edge by Lynn Osterkamp
Midnight Matings 13 Splash and Elegance by Gabrielle Evans
Drive Me Sane by Rogers, Dena
They'd Rather Be Right by Mark Clifton
Howl for Me by Lynn Red
Half a Life by V. S. Naipaul
Our partner