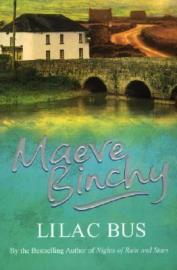 Published in the United Kingdom by Arrow Books in 2006

Maeve Binchy has asserted her right under the Copyright, Designs and Patents Act, 1988 to be identified as the author of this work.

This is a work of fiction. Names and characters are the product of the author’s imagination and any resemblance to actual persons, living or dead, is entirely coincidental.

First published in the United Kingdom in 1987 by Century

Addresses for companies within The Random House Group Limited
can be found at:
www.randomhouse.co.uk/offices.htm

The Random House Group Limited supports The Forest Stewardship Council (FSC), the leading international forest certification organisation. All our titles that are printed on Greenpeace approved FSC certified paper carry the FSC logo. Our paper procurement policy can be found at:
www.rbooks.co.uk/environment
.

Praise for The Lilac Bus

For my dear Gordon
with all my love

Maeve Binchy was born in County Dublin and was educated at the Holy Child Convent in Killiney and at University College Dublin. After a spell as a teacher in various girls’ schools, she joined the
Irish Times
, for which she wrote feature articles and columns. Her first novel,
Light a Penny Candle
, was published in 1982, and since then she has written more than a dozen novels and short-story collections, each one of them a bestseller. Several have been adapted for cinema and television, most notably
Circle of Friends
in 1995. She was awarded the Lifetime Achievement award at the British Book Awards in 1999. She is married to the writer and broadcaster Gordon Snell.

Praise for
The Lilac Bus

‘Binchy’s novels are never less than entertaining. They are, without exception, repositories of common sense and good humour . . . chronicled with tenderness and wit’
Sunday Times

Nancy was early, but then she always was, and she didn’t like being seen there too soon. It looked as if you had nothing else to do if you arrived far too early for the bus home. The others all arrived rushing and panting and afraid they’d miss it, because if they missed it then they really did. Tom turned the key in the ignition at 6.45 and swung the Lilac Bus out into the road. That way he had them all home before ten o’clock and that was his promise. No point in going home for a weekend if you aren’t in the pub by ten, that was his philosophy. It wasn’t Nancy’s but she was compulsively early for everything. It was just her way. She went into a shop that sold magazines and cards. She knew a lot of the cards by heart from studying them on a Friday. There was the big one with tears falling down it: ‘Sorry I missed your birthday.’ They had the country papers in this shop too but Nancy never bought one. There’d be a paper at home and she could catch up on everything then.

She examined her new perm in the big round mirror which was not meant so much as a mirror as a deterrent to shoplifting. It was set high on the wall and at a funny angle, or she hoped it was. Otherwise the perm looked very odd indeed. She stared up at her reflection anxiously. Surely she didn’t look like some small worried animal with fuzzy hair and huge terrified eyes. That’s what she saw in the mirror, but of course that’s not what people down at her own level would see? After all, everyone looked silly from this point of view. She patted her head and had another pang about the perm. It looked to her dangerously like those old-fashioned perms that people like her mother got in Rathdoon. The summer perm and the Christmas perm. Frizz, fuzz . . . tight curls growing out into what looked like flashes of lightning or electric shocks as the weeks went by. The girls in the salon assured her that she was mad to think this. She had got a modern perm, one of the newest on the market. Think what she’d have paid if she had to pay for it! Nancy had smiled grimly. Paid for it! At that price! Nancy Morris wouldn’t have paid half that price or a quarter of that price for a perm. Nancy Morris had crossed Dublin to go to a salon where she heard they needed people to practise on.
Models
was the expression, but Nancy was more realistic. They needed heads with hair and smart people like Nancy found out which were the big salons with lots of trainees and on what nights their
classes and demonstrations were. She had only paid for two visits to a hairdresser since she came to Dublin six years ago. That wasn’t bad going, she smiled proudly. Still it was done now, this perm, no point in peering up at herself and worrying. Better go across and get on the bus. Surely some of the others would be there by now, and it was well after half-past six.

Tom was sitting there reading an evening paper. He looked up and smiled. ‘Evening, Miss Mouse,’ he said pleasantly and lifted her big suitcase up onto the roof rack with one easy movement. She got in crossly. She
hated
him calling her Miss Mouse, but it was her own fault. When she had rung to ask for a place in his minibus she had given her name as Miss Morris. Well, she was used to being formal on the phone – that was what her job was about, for heaven’s sake. How was she to know that she should have said her first name and that he genuinely misheard the Morris bit. But it was very galling that he still refused to call her Nancy, even though he always called old Mrs Hickey Judy and she could have been his mother.

‘It’s light for such a big case,’ he said pleasantly. Nancy just nodded. She didn’t feel like telling him it was her only suitcase and she had no intention of going out and spending over a fiver on some kind of nylon holdall like the others had. And anyway she needed a big case: there were always things to take back to Dublin, like potatoes and whatever
vegetables there were, and anything else that turned up. There was the time that her mother’s friend, Mrs Casey, was getting rid of her curtains: Nancy brought them back and they were lovely in the flat.

She sat down in one of the middle seats, straightened her skirt under her so that it wouldn’t crease and took out her glucose sweets. They had jars of them in the hospital, and they always told her to help herself. She didn’t eat them normally but it was nice on a bus journey to have something; the others often bought barley sugar or toffees, but what was the point of spending money on sweets when they were there for the asking? She unfolded a newspaper that one of the patients had left behind in the waiting room. She got a lot of her reading material this way – people waiting for the specialists were inclined to be forgetful about papers and magazines, and there was rarely an evening she didn’t have something to read. And it was nice to have a variety, she told herself. It was like a surprise. Mairead didn’t understand. Nancy’s brow darkened when she thought of Mairead. And all that had to be sorted out. It had been so unexpected and so unfair.

She held up the newspaper so that Tom would think she was reading and she went over it all again. Mairead coming in on Wednesday and walking round restlessly picking things up and putting them down. You didn’t have to be a genius to know there was something on her mind. Nancy thought she was
going to ask about the television again. They had a perfectly good black and white set which was a bit snowstormish now and then but usually got a terrific reception. What on earth was the point of paying out a fortune renting a colour set? And even a video: Mairead had once mentioned this as if they were some kind of millionaires. She had looked up from the telly, which was admittedly having one of its bad nights and you had to guess a lot from the sound-track; but Mairead had wanted to talk about something much bigger.

‘I’ve been thinking all week at work how to say this, Nancy, and I can’t think of any proper way so I’ll just say it straight out. I want to share the flat with someone else, and I am going to have to ask you to leave. In your own time of course, I’m not throwing you out on the road . . .’ She had given a little nervous laugh but Nancy had been too astounded to join in. ‘You see,’ Mairead had gone on, ‘it was never permanent. It was just to see what we thought. . . . that was the arrangement. That was what we said . . .’ Her voice had trailed away guiltily.

‘But we’ve been sharing for three years,’ Nancy said.

‘So why? Don’t I pay the rent in time always and the electricity? And I contribute to the food from home and I got curtains for the hall windows and . . . ?’

‘It’s just . . . no there’s no reason, can’t we do it nice and easily now without quarrels and questions. Can’t you just find another place and we’ll still meet now and then, go to the pictures, you come over here one evening, me go to your place. Come on, Nancy, that’s the grown-up way to do things.’