Read Lincoln in the World Online

Lincoln in the World 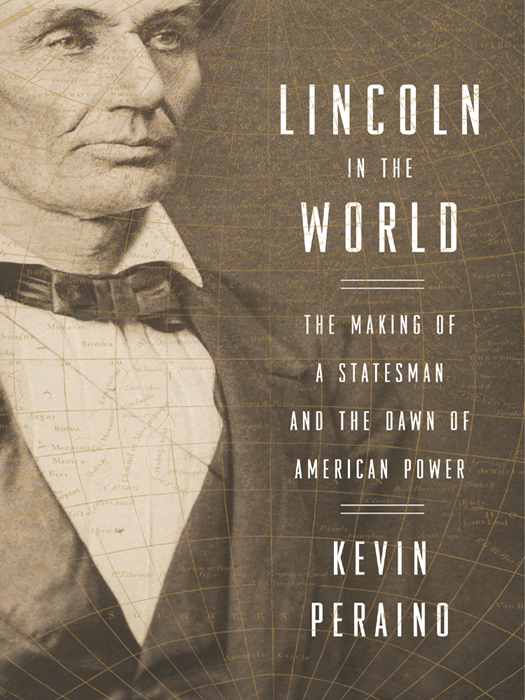 All rights reserved.
Published in the United States by Crown Publishers,
an imprint of the Crown Publishing Group,
a division of Random House LLC,
a Penguin Random House Company, New York.
www.crownpublishing.com

C
ROWN
and the Crown colophon are registered trademarks of Random House LLC.

If we remain one people, under an efficient government, the period is not far off when we may defy material injury from external annoyance; when we may take such an attitude as will cause the neutrality we may at any time resolve upon to be scrupulously respected; when belligerent nations, under the impossibility of making acquisitions upon us, will not lightly hazard the giving us provocation; when we may choose peace or war, as our interest guided by justice shall counsel.

Westward the star of empire takes its way;

The girls link-on to Lincoln, as their mothers did to Clay.

I
N THE COLD, DIM BALCONY OF FORD
’
S THEATRE, MARY LINCOLN RESTED A HAND ON HER HUSBAND
’
S KNEE, THEN HUDDLED CLOSER TO HIS SIDE
. S
HE WAS NOT ALWAYS SUCH A TENDER WIFE
. During spells of anger, she had been known to batter her husband with broomsticks, books, timber, and “very poorly pitched potatoes”—at least once drawing blood from his nose. Mary, whom a White House secretary had nicknamed Hellcat, was at her worst when she felt trapped. The sight of transatlantic steamers preparing to cross the ocean could touch off a storm of self-pity. “How I long to go to Europe,” she would complain. Mary mercilessly taunted her husband that for her next marriage, she would make sure to choose a man who could afford the price of passage.
1

Mary might not have considered her husband wealthy, but tonight—finally—she could not deny that he was powerful. When the couple had entered the theater, a half hour late, the entire performance came to a halt. The orchestra brayed “Hail to the Chief” over the unyielding roar of the crowd. The First Lady, battling a headache, had not wanted to go out at all. The president, too, appeared stooped, exhausted, and sad. Actually, though, Lincoln had good news for his wife. They would finally travel to Europe. When his term was over, he told Mary, he wanted to do some exploring, to
go “abroad among strangers.” The couple would spend time “moving and travelling,” he promised.
2

Mary had always been the more cosmopolitan of the two. As a girl in Lexington, Kentucky, she had attended a boarding school where students spoke French, run by Parisian aristocrats who had fled the Reign of Terror. The great American diplomat Henry Clay was a neighbor and close family friend; a young Mary once stopped by his estate to parade her new pony. As an adult, there was something slightly pathetic about her pining. A White House staff member complained that the First Lady put on “the airs of an Empress.” Her affectations grated on Lincoln’s diplomats. She overused the word
sir
—“as if you were a royal personage,” one of them griped. When asked if she spoke French, the First Lady replied: “Très poo.”
3

Mary was like a “toothache,” Lincoln’s law partner once remarked, keeping her husband “awake night and day” to political opportunities. When it came to foreign affairs, however, Lincoln had become his own man. The Illinoisan had been telling friends for years that he wanted to visit Britain, the land of his forebears and his favorite writers, Shakespeare, Byron, and Burns. As the Civil War erupted and intensified, the president repeatedly underlined the conflict’s global importance, arguing that “the central idea” behind the Union effort was to prove to the world “that popular government is not an absurdity.” He had long since come to terms with America’s rise to power. “We are a great empire,” he told a Michigan crowd as early as 1856. “We stand at once the wonder and admiration of the whole world.”
4

Now America’s army had grown to the largest on the planet, and its massive new navy threatened the Continent’s outdated fleets. Hyperventilating European newspaper correspondents worried that the American president might send “a fleet of gunboats sailing up the Seine” or his million-man army marching through Hyde Park. At the start of the Civil War, cartoons in Britain’s popular
Punch
magazine had portrayed Lincoln as a “silly-faced” buffoon. By the end,
the magazine’s depictions of the American president “bore the stamp of despotic ferocity.”
5

As Lincoln sat in the dark of the theater, his ambitious wife gripping his hand, the night’s entertainment must have seemed somehow appropriate. The play, a lighthearted tale of an American trying to collect his inheritance in Europe, had the audience in hysterics. And then, in an instant, the laughter ended and the screaming began. Mary Lincoln saw the sickening flash accompanied by the report of a pistol. She felt a body dash past, brushing against her shawl, and watched her husband’s head slump onto his chest. In another moment a distant voice cried out, “Thus ever to tyrants!” in a foreign tongue from ages past.
6

Abraham Lincoln is not often remembered as a great foreign-policy president.
7
He had never traveled overseas and had no personal friends in Europe. His upbringing in rural Kentucky and Indiana was so provincial that, when a stranger came to town who could speak a few words of Latin, he “was looked upon as a wizzard.” As a rising politician he had studied just enough German to charm immigrant voters. As for French, the nineteenth-century language of diplomacy, he did not understand enough to read a menu. (“Hold on there,” the Railsplitter once told a waiter in a New York French restaurant. “Beans. I know beans.”) The Illinoisan’s only pre-presidential brush with the diplomatic service came in 1841, when a friend tried to get him appointed chargé d’affaires in Colombia. Lincoln had been struggling with a bout of depression—he had gone “crazy as a
loon
,” one acquaintance recalled—and his allies thought a change of scenery would do him good. The secretary of state, Daniel Webster, not surprisingly passed him over.
8

In the White House, Lincoln’s attempts at diplomatic finesse could seem comically inept. His efforts to bow elegantly to visiting diplomats were so “prodigiously violent” that they had “almost the effect of a smack” in their “rapidity and abruptness.” On one occasion,
receiving a delegation of Potawatomi Indians, Lincoln greeted his guests in broken English. “Where live now?” he asked, as his aides chortled. “When go back Iowa?” Foreign envoys accustomed to the refined rituals of European chancelleries were repelled. “His conversation consists of vulgar anecdotes at which he himself laughs uproariously,” the Dutch minister complained. Even Lincoln’s young son Tad noted that his father looked “pretty plain” compared to the European diplomats at one state dinner, who were “all tied up with gold cords” and “glittered grand.” The president recognized his shortcomings. “I don’t know anything about diplomacy,” he told one foreign envoy. “I will be very apt to make blunders.”
9

Nor, at least at first glance, did the American president’s foreign-policy team seem very promising. The tiny diplomatic corps in the midnineteenth century was still a dumping ground for political enemies and inconvenient radicals. “There is hardly a court in Europe which has not had some specimen of the American character in its worst form—a sot, or rake, or swindler,” the
New York World
warned as Lincoln took office. Lincoln’s choice for secretary of state, William Henry Seward, was actually a capable diplomat who had traveled widely. Yet he could also be vain and impetuous. He tended to drink heavily at dinner parties and issue idle threats of war from behind a cloud of cigar smoke. “When he was loaded,” recalled the son of Lincoln’s minister to Britain, “his tongue wagged.”
10

Lincoln’s men in the field could be just as volatile. The president’s personal secretary John Hay noted that while Lincoln’s envoys were “generally men of ability,” they were “not always of that particular style of education which fits men for diplomacy.” At the American legation in Paris, “French is a language as unknown as Hottentot,” Hay observed, adding acidly that the post’s secretary “will have to postpone his French studies till he acquires enough English to enable him to make a decent appearance in society.” Lincoln’s minister in the French capital—“a gentleman not remarkable for his alertness or undeviating attention to the public business,” in the words of one historian—ended up dying in the Paris apartment of “a woman not
his wife,” and his body had to be smuggled back to his home. Cassius Marcellus Clay, the president’s fiery minister in Russia, was fond of walking around with three pistols and a dagger he called an “Arkansas toothpick” dangling from his waistband. Hay judged Clay to be “the most wonderful ass of the age.” Lincoln acknowledged that his man in St. Petersburg possessed “a great deal of conceit and very little sense.”
11