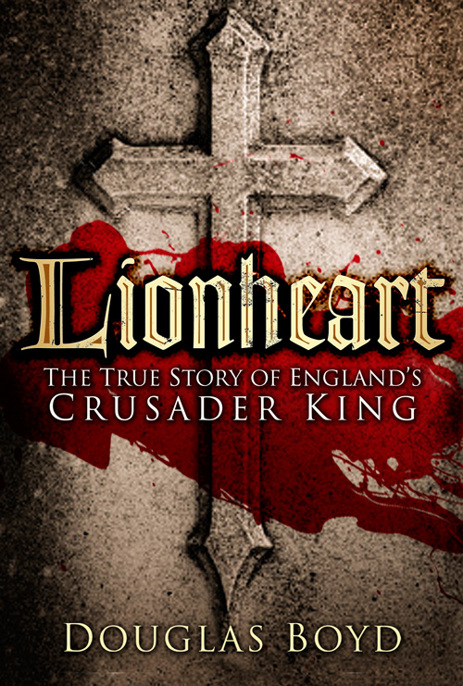 My thanks are due to four archaeologists and maritime historians who have been extraordinarily generous with their help in tracing the movements of a long-dead English king and gave permission for my use of their copyrighted material published in academic papers and books: Professor John H. Pryor of the Centre for Medieval Studies at the University of Sydney, NSW; and Professor Emeritus Sarah Arenson and Dr Ruthy Gertwagen of the University of Haifa. The late Professor Emeritus Ehud Netzer of the Hebrew University of Jerusalem and Dvorah Netzer not only shared much knowledge with me, but also extended warm welcome and hospitality on my visits to Israel.

Professor Friedrich Heer of the University of Vienna used Jacob Burckhardt’s light to illuminate some dark periods of history for me; my Gascon friends Nathalie and Eric Roulet opened my eyes and ears to Occitan as a living language; Eric Chaplain of Princi Neguer publishing house in Pau lent precious source material in that and other languages; fellow-author and horsewoman Ann Hyland gave valuable equestrian advice; Jennifer Weller, a wonderful artist, took time out to draw maps and seals; Tuvia Amit helped with details of Arsuf/Apollonia; La Société des Amis du Vieux Chinon authorised me to photograph the unique fresco in the Chapelle Ste-Radegonde; my former comrades-in-arms John Anderson and Colin Priston researched the massacre at York and Hodierna Nutrix, the mystery woman in King Richard’s life; the staffs of La Bibliothèque Nationale de France and its online resource
Gallica
, of the British Library and of the Bibliothèque Municipale de Bordeaux made available much source material; that doyen of literary translators, Miguel Castro Mata threw new light on the crusader fleets’ stopovers in Portugal; and my partner Atarah Ben-Tovim was an enthusiastic companion following Richard I’s travels on both sides of the Channel, in Sicily and the Levant.

Lastly, although chronologically first, I acknowledge my debt to two great teachers, Latinist William McCulloch and George Trotman, an inspiring teacher of French and Spanish, both sometime of Simon Langton School for Boys, Canterbury. Together, they unleashed my passion for linguistics, without which this book, drawn from sources in eight medieval and modern languages, would not have been written.

With so much expert support, it goes without saying that any errors are mine.

PART 1: THE EDUCATION OF A PRINCE

2
Duke to King, Duchess to Queen

PART 2: A LIFE OF VIOLENCE

6
Death of a Prince

7
Heir to the Empire

8
The Hell of Hattin

9
The Call of Destiny

12
Of Cogs and Cargo

14
A Bride for Richard

17
Blood on the Sand, Blood in the Mud

PART 4: RIDING TO A FALL

18
The Cost of an Insult

22
Of a Siege, Sex and Saddles

On the Trail of the Lionheart – Places to Visit

In the twenty-first century, despite all the tools of enquiry at their disposal, western journalists creating ‘history as it happens’ overwhelmingly endorse hand-outs from the Pentagon and Downing Street, so that British and American wars are presented as democratic actions undertaken for humanitarian reasons and fought with due respect for human life and protection of non-combatants, even when the government hand-outs are known by many of those journalists to be patently false, and incontrovertible evidence of war crimes exists. Anyone believing differently need only watch John Pilger’s 2010 documentary
The War You Don’t See
, which includes shattering admissions of this practice by well-known journalists and elected politicians, government officials and service personnel admitting their morally and legally unacceptable actions in the Iraq War of 2003–11.

History as a record of the past can also be misleading. Living two and a half millennia ago, Herodotus was later dubbed by Cicero ‘the father of history’ because he was the first person to attempt recording the past methodically. His investigation into the origins of the Greco–Persian wars gave us the word we use today:
istoria
, meaning ‘learning by enquiry’. That is the business of historians, of the present or the past.

The first Roman historian to write in Latin was Cato the Elder in the second century
BCE
. To him, the point of recording the past was to prove the superiority of the Roman race and way of life, and his successors continued to present the Romans always as the good guys and all Rome’s wars as just. So, almost from the beginning, history was perverted from Herodotus’ open-minded spirit of enquiry by what we today call ‘spin’, varying from the ethnically biased Roman accounts to the nineteenth-century view of German historian Leopold von Ranke that history should demonstrate a divine plan, with the hand of God manifest in the deeds of men, even when this meant snipping the pieces of time’s jigsaw to fit. Ranke’s contemporary, the Swiss historian Jacob Burckhardt, disagreed, holding that
all
events should be recorded, whether or not they seem to fit any divine or other plan. However, the teaching of history in Britain’s universities followed the Protestant school of Ranke, thanks largely to the great classical scholar Bishop William Stubbs of Oxford. This Christian spin on the teaching and study of history at British universities – and therefore British schools – lasted into the second half of the twentieth century.

To Stubbs, King Richard I of England should have been seen as a heroic figure because he led the Third Crusade with the intention of reconquering Jerusalem from the Saracen. In fact, Stubbs’ opinion was that Richard was ‘… a bad ruler; his energy, or rather his restlessness, his love of war and his genius for it, effectively disqualified him from being a peaceful one; his utter want of political common sense from being a prudent one.’ Stubbs’ considered opinion was that Richard was ‘a man of blood, whose crimes were those of one whom long use of warfare had made too familiar with slaughter … and a vicious man’.
1

Sir Steven Runciman, another respected historian of the crusades, summed up the two sides of Richard’s character: ‘He was a bad son, a bad husband and a bad king, but a gallant and splendid soldier.’
2
Richard spent his entire adult life in warfare and consistently displayed supreme physical courage, but
gallant
and
splendid
are not adjectives one would use today.

When writing of the past, it is a responsibility of historians to consult contemporary sources whenever possible, but also to weight them according to their authors’ relationship with the subjects of whom and the issues of which they wrote, and take into account the political and religious pressures on the chroniclers. In my biography of Richard the Lionheart’s mother – that extraordinary woman, Eleanor of Aquitaine, who was the target of calumnies and slanders in her own lifetime and afterwards – it was vital to bear in mind that the contemporary sources in Latin were written by celibate and misogynistic monks. Even St Bernard of Clairvaux, the wise founder of the Cistercian Order, could not bear to look upon his own sister in her nun’s robes. In addition to their aversion to all women as the perceived cause of men’s lust, the chroniclers owed a political loyalty to either Eleanor’s French husband King Louis VII, whom she divorced, or England’s King Henry II, who locked her up for a decade and a half after she raised their sons in rebellion against him. The chroniclers were thus extremely unlikely to be objective about this major player on the European stage, and their comments on her must be assessed with that in mind.

Similarly, when evaluating King Richard I it is necessary to examine closely the enduring legend of this ‘parfit gentil knight’ and noble Christian monarch who selflessly abandoned his kingdom in 1190 to risk all in performing his religious duty to liberate the Holy Land from the Saracen. In fact, the legend originated as a PR campaign orchestrated by Queen Eleanor to blackmail the citizens of the Plantagenet Empire into stumping up the enormous ransom demanded for his release from an imprisonment that was all of his own making and had nothing to do with religion.

The motto of Hitler’s propaganda minister Josef Goebbels – that a big lie will succeed where a smaller one may be questioned – was already understood by Eleanor and used by her, for Richard was held prisoner not by the Saracen enemy in the Holy Land, but by the ruler of the Holy Roman Empire, Henry VI Hohenstaufen. He had not been captured fighting heroically in battle, but while slinking homewards incognito at the end of his pointless crusade which cost tens of thousands of lives on both sides, leaving an undying legacy of hatred in the Muslim world, where
malik Rik
is still a name with which to frighten disobedient little boys. Although the Church protected the persons and property of crusaders during their absence from their homelands, even the pope did little to protect this English king from Hohenstaufen and his vassal Duke Leopold of Austria, one of many European fellow-crusaders humiliated and alienated by Richard’s arrogance during the abortive Third Crusade.

As Bishop Stubbs knew well, Richard had spent his whole life shedding blood, not tactically and face-to-face with a more or less equally matched enemy, but strategically, by slaughtering defenceless peasant men, women and children, laying waste their fields and cutting down their orchards to bring starvation to the survivors, thus depriving a noble enemy of the support base for his unproductive way of life. It was, to use a modern expression, total war. Because of the enormous suffering thus inflicted on millions of innocent people, the Church pronounced the slaughter of farm animals and the destruction of agricultural implements in war to be a sin. Although professedly devout on occasion, Richard was not deterred by this interdiction.

Edward Gibbon held that history was ‘little more than the register of the crimes, follies and misfortunes of mankind’. No other single life better illustrates that judgement than the life of King Richard I. This, then, is the story,
warts and all
, of a man born to parents of unsurpassed intelligence, wealth and achievements and whose birthright raised him to world-wide fame, yet who died in agony, ‘naked as he came into this world’.